Skip to main content
View more on
What Is Jerusalem?
View more topics under
Foundations
View more on this topic

Jerusalem through My Father’s Eyes

In the late 1980s, Kevork Kahvedjian and his wife, Hasmik, discovered old film strip images that Kevork’s father, Elia, had kept inside the Armenian Convent in the Old City of Jerusalem. When Kevork asked his father about those photos, he dismissed them as unimportant. But Kevork went ahead and printed them.

It turned out that these photographs, taken mainly in Jerusalem between 1924 and 1947, would become valuable for the family business as well as for people worldwide. What Elia the photographer had deemed unimportant would become a historic treasure that documented life in Jerusalem prior to the 1948 War.

In 1998, one year before Elia the photographer passed away, his son, Kevork, published the black-and-white photos his father had taken in a hardcover book collection. He titled the book Jerusalem through My Father’s Eyes. 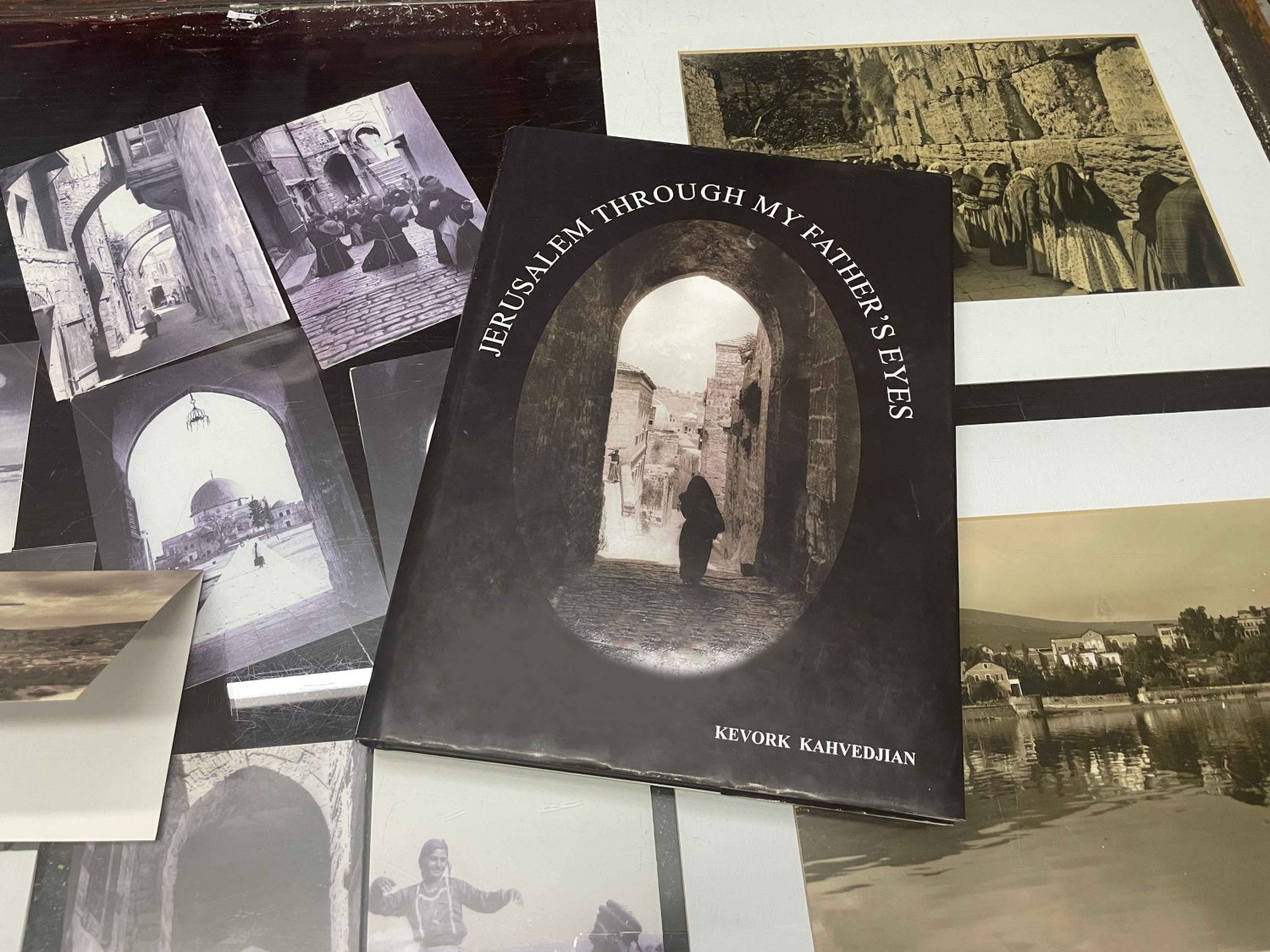 In the acknowledgments, Kevork writes:

Compiling this collection of my father’s photographs for publication has been a labor of love. It gives me great satisfaction to think that a part of his work is now available in book form to the many people who love and live Jerusalem, whether here or abroad.1

The book comprises a rich collection of 131 impressive pictures, mainly of Jerusalem and the surroundings, taken since 1924. Many photographers have described the coffee table book as “the best buy for Jerusalem lovers.”

Jerusalem through My Father’s Eyes has photographs of historic sights, nature reserves, and daily life in Palestine from more than 80 years ago. Photos of Jaffa and Damascus Gates at different years appear with images of fortune-tellers, farmers, shoe shiners, olive grinders, Bedouins, and gypsies.

Among the interesting details one finds are the distinct clothing styles of Palestinian women in the 1930s, and the love of great hummus—which is a passion that has persisted across the decades. There are also a couple of photos of the Graf Zeppelin, the Nazi passenger-carrying airship, that flew over the Old City of Jerusalem in April 1931. (See more of the photos here and here.)

In some ways, the photos bear witness to a time in Jerusalem when Jews and Arabs interacted naturally, having lunch together and going to the same fortune-tellers. The collection gives readers a feeling of hope and harmony.

The photos bear witness to a time in Jerusalem when Jews and Arabs interacted naturally, having lunch together and going to the same fortune-tellers.

Elia Photo-Service in the Old City of Jerusalem

Located on al-Khanka Street, at the heart of the Christian Quarter in the Old City of Jerusalem, Elia Photo-Service (known locally as “Photo Elie”) attracts photographers, journalists, researchers, and curious individuals from all over the world. For the most part, it was a place to develop film, have portraits taken, and hire photographers for special events.

After the publication of Jerusalem through My Father’s Eyes, the studio assumed the role of a tiny museum, where visitors can see the actual camera that Elia Kahvedjian used to take his photos. 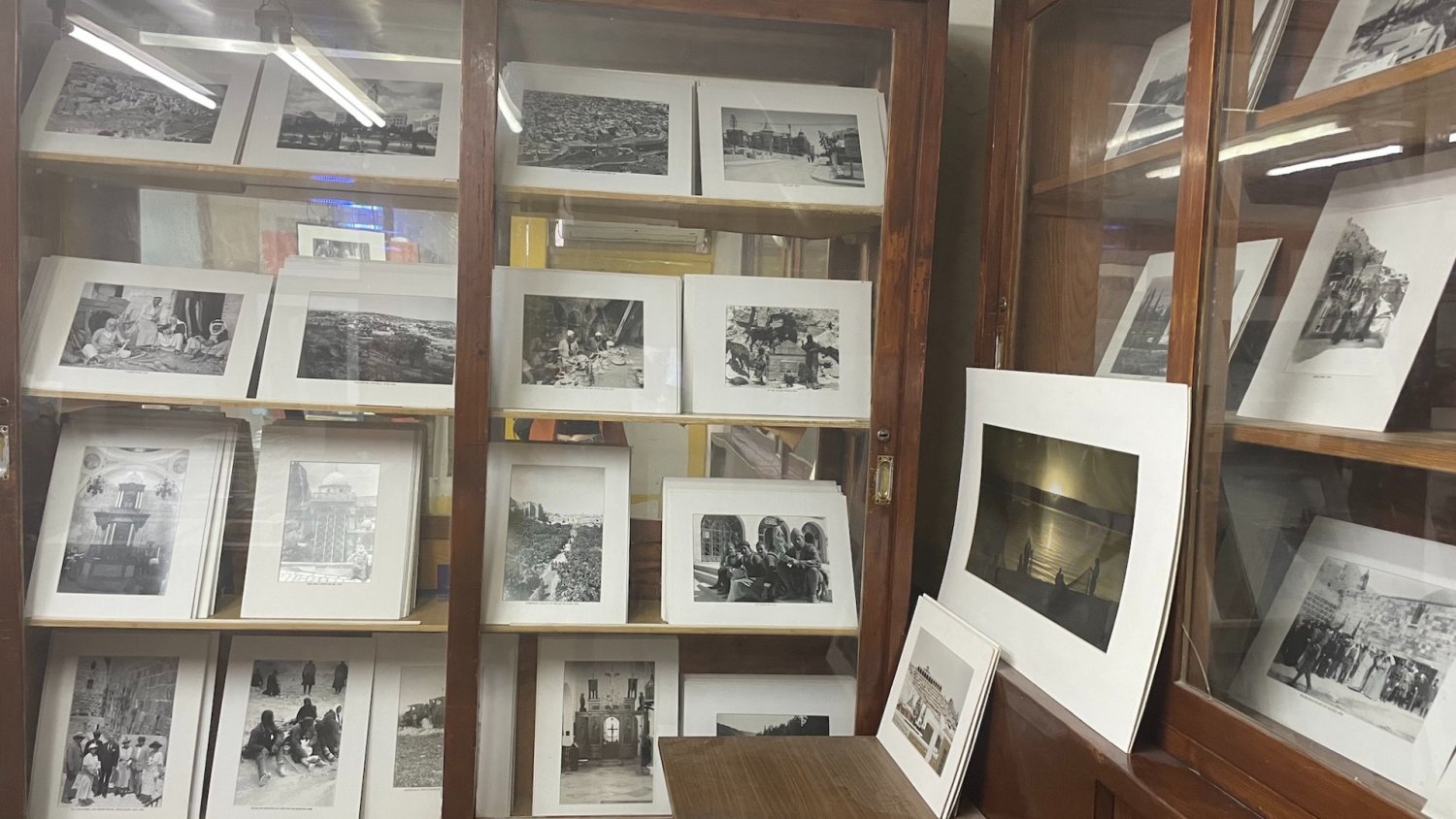 The studio itself was set up in 1930 by Elia Kahvedjian. Like many other photography studios at that time, it was first located on Jaffa Road in the New City in the area that became West Jerusalem. Unlike others, Kahvedjian was able to move the studio to the Old City on the eve of the 1948 War. 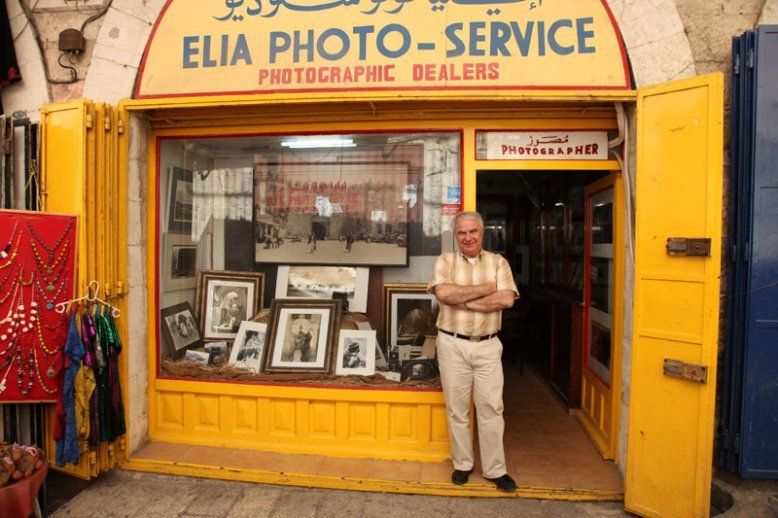 The son: The late Kevork (George) Kahvedjian stands in front of his father’s shop, Elia Photo-Service, in the Old City of Jerusalem, November 2010.

Kevork (George) Kahvedjian, who worked with his father, took over the business after his father passed away, and his son Elie, also an excellent photographer who assisted his father, now runs the shop. Elie was the one who scanned all his grandfather’s photographs and provided the technical support for their successful publication. With a friendly and humorous spirit, Elie provides remarkable details (specific to the interests of his visitors) about early photography, his grandfather’s images, and the history of the Armenian Genocide.

Among those extraordinary details is the story of Elia Kahvedjian (the senior) himself, the man whose photos have garnered so much attention.

The Survival Story of Elia Kahvedjian

As a five-year-old boy, Elia Kahvedjian (b. 1910 in the Urfa region of eastern Turkey) survived the Armenian Genocide of 1915. Almost all his family members (parents, siblings, uncles, aunts, and cousins) were murdered during the systematic killing of Armenians by the Ottoman Empire. He and one sister survived but were separated. He would meet her 18 years later in Syria.

Before she was killed, Elia’s mother saved her son by giving him to a Kurdish stranger. Not long after, this man sold Elia as a slave for a few coins.

Elia spent his early childhood working day and night as a slave, operating the bellows for the blacksmith who had bought him before he was thrown out on the street by the blacksmith’s new wife. He became a beggar.

When he was about 10 years old, he was among the 10,000 children that American missionaries sent to orphanages in different parts of the Middle East.

Elia was sent to an orphanage in Nazareth. He did not know his own last name. According to his grandson Elie,

At an orphanage they asked him what his surname was and he didn’t know, so they asked him: “What does your father sell in his shop?” He said “coffee” so they called him Kahvedjian [kahve means coffee in Turkish].2

At the orphanage, he discovered photography by helping a teacher, Garro Boghosian, who was also an amateur photographer and used Elia to help carry his equipment.3

By the time he was 16, he went to Jerusalem and lived in an orphans’ residence. There, he started working in the photo shop of the Hanania brothers in the New City. About four years after, when they were planning to close the shop, he borrowed money and bought the shop.

Somehow, two days before the 1948 War erupted, a British officer came and warned him of the impending violence. He was able to gather all his negatives and work and move them to safety in the Armenian Quarter. The family only rediscovered them in his Old City shop in 1987—along with 1,400 photographs by other photographers dating from 1840 to 1947, an invaluable collection.4

From that time on, the photos brought the family notoriety because they shined a light on a little-documented era of the city’s history. According to his granddaughter, Laura Dirtadian, who arranged an exhibit of his photos in San Francisco in 2014, they evoked a poignant response: “There were people coming up to me who were crying, because of the environment which was portrayed in these photographs. You see Palestinians and Israelis and Armenians, and they are living among one another in peace.”5 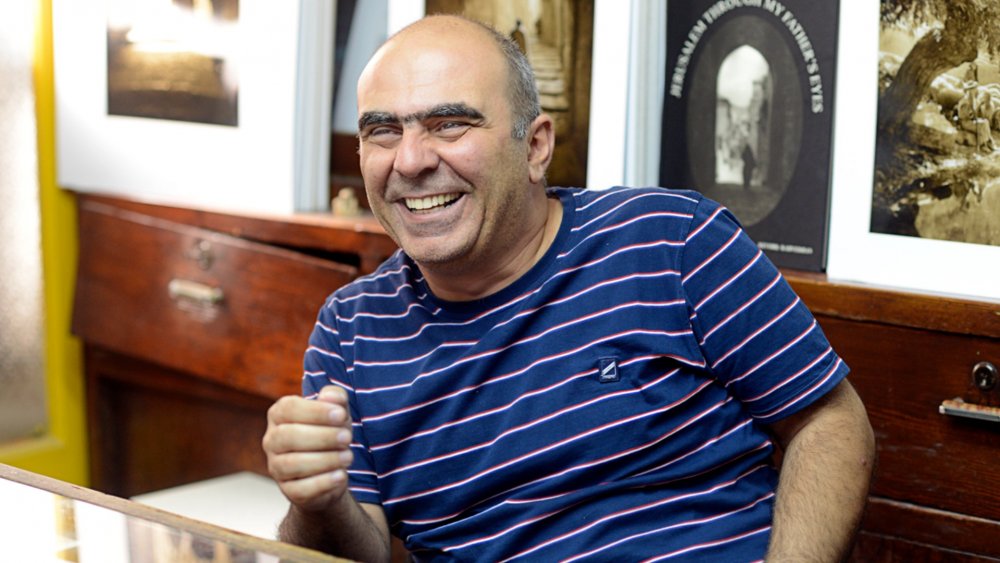 The grandson: Elie Kahvedjian in his grandfather’s shop, Elia Photo-Service, in the Old City of Jerusalem, October 2015

“My grandfather was not at all a bitter person,” says Elie, now around 50, who runs the Elia Photo-Service shop inside the Christian Quarter of the Old City of Jerusalem. “He was so determined to live and survive. He made sure to continue living, to have children, and to open his own photo studio.” 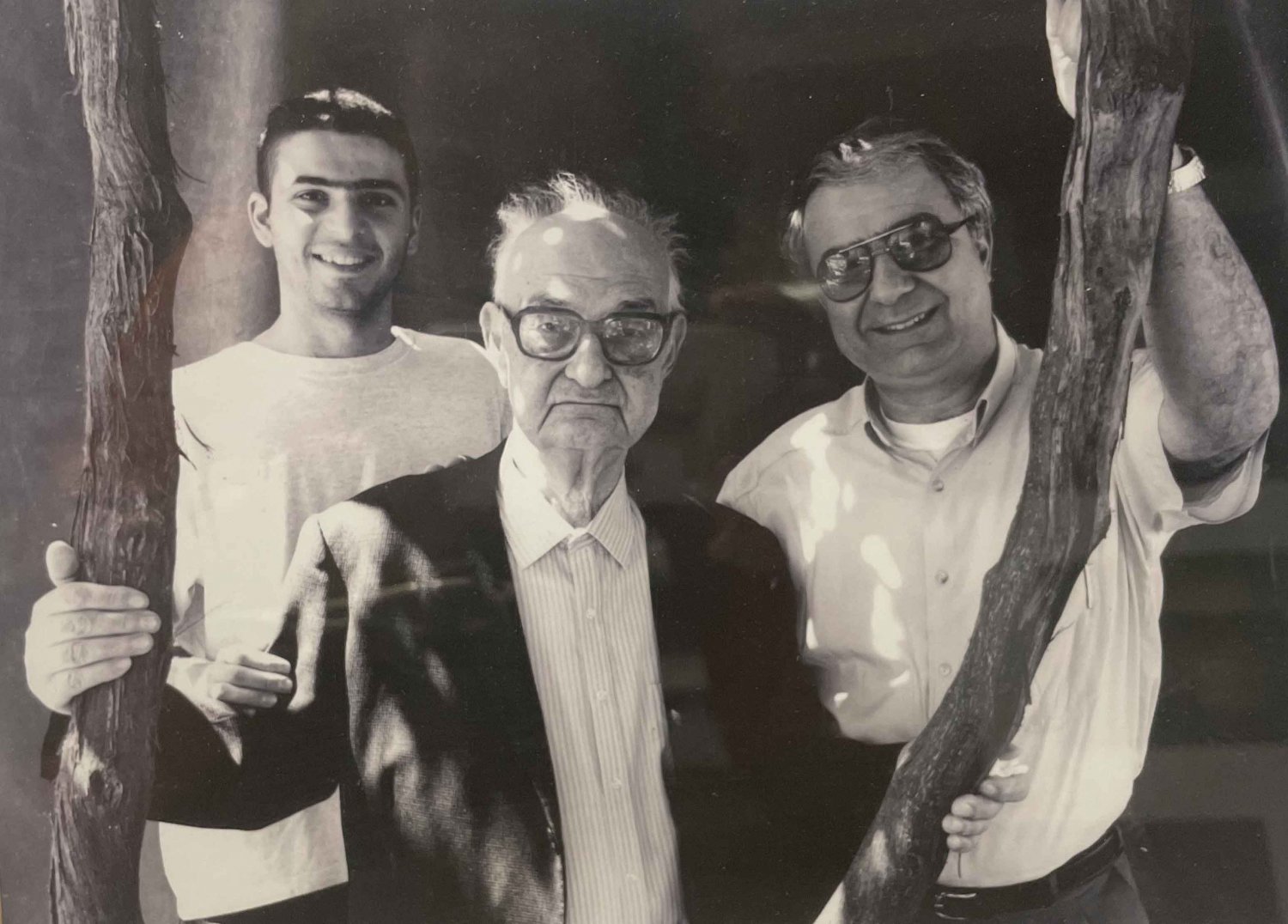 Photo displayed at the Photo Elie Studio in the Christian Quarter, Old City of Jerusalem

Elie points out the intergenerational photo taken of his father, younger brother, and grandfather. “Notice his hands,” he says. In the photo, the grandfather, who had witnessed his entire family die before his eyes as a child, and who witnessed the 1948 as well as the 1967 Wars in Jerusalem, holds the tree in both hands—as if determined to stand still, rooted in a place just like the tree he’s holding, and to choose to live in full dignity despite all odds.

Elia Kahvedjian lived until 1999, when he died naturally at approximately age 89.

Elie Kahvedjian, speaking of his grandfather in the photo of the three generations of Kahvedijians with the tree

A new book traces the deeply rooted history and contributions of Armenians in Palestine.

Jerusalem’s historian and defender of academic freedom, who fought to preserve the city’s diversity and plurality