On Friday, October 22, 2021, more than 100 people attended the book launch of a new book called A Palestinian Armenian: The Intertwine between the Social and the Political by Dr. Varsen Aghabekian (PhD, RN). The book documents the presence of Armenians in Palestine. The event was held at Pari Siradz Club in the Armenian Quarter, inside the Old City of Jerusalem. 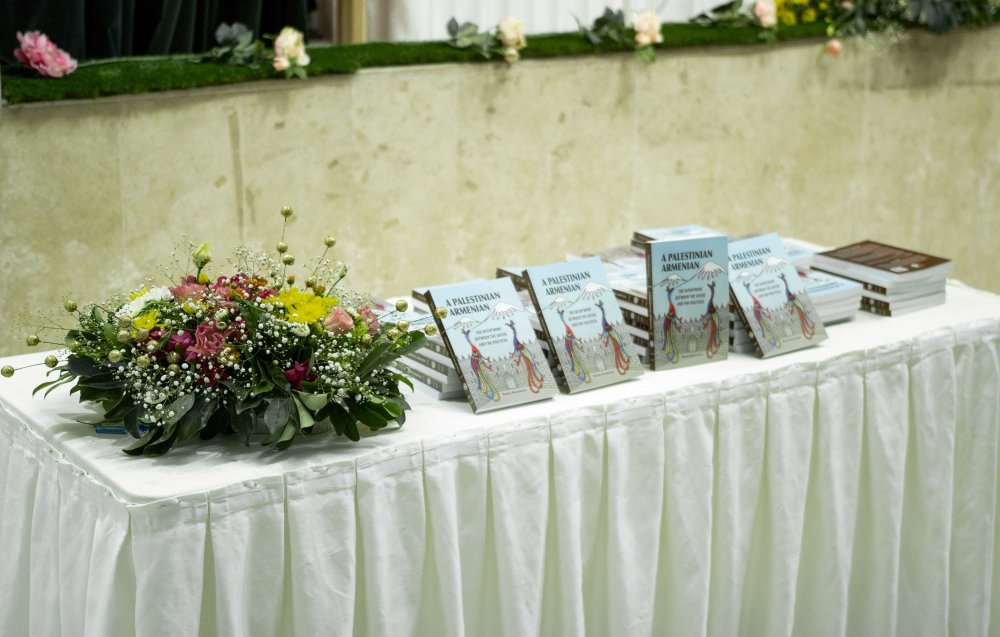 The newly published book, A Palestinian Armenian: The Intertwine between the Social and the Political, displayed on a table at the book launch event at Pari Siradz Club in the Armenian Quarter in the Old City of Jerusalem, October 22, 2021

The panel was moderated by the distinguished teacher of midwifery, also known as “the mother of modern midwifery in Palestine,” Vartouhi Kukeian. On the panel were three distinguished personalities, namely: Dr. Rev. Mitri Raheb, founder and president of the Diyar Consortium (who helped get the book published through Dar al-Kalima University Press); Saro Nakashian, Educator and General Director of Palestine Education for Employment; and George Hintlian, the most proficient historian on issues related to Armenians in Palestine/Israel and the Armenian Genocide. 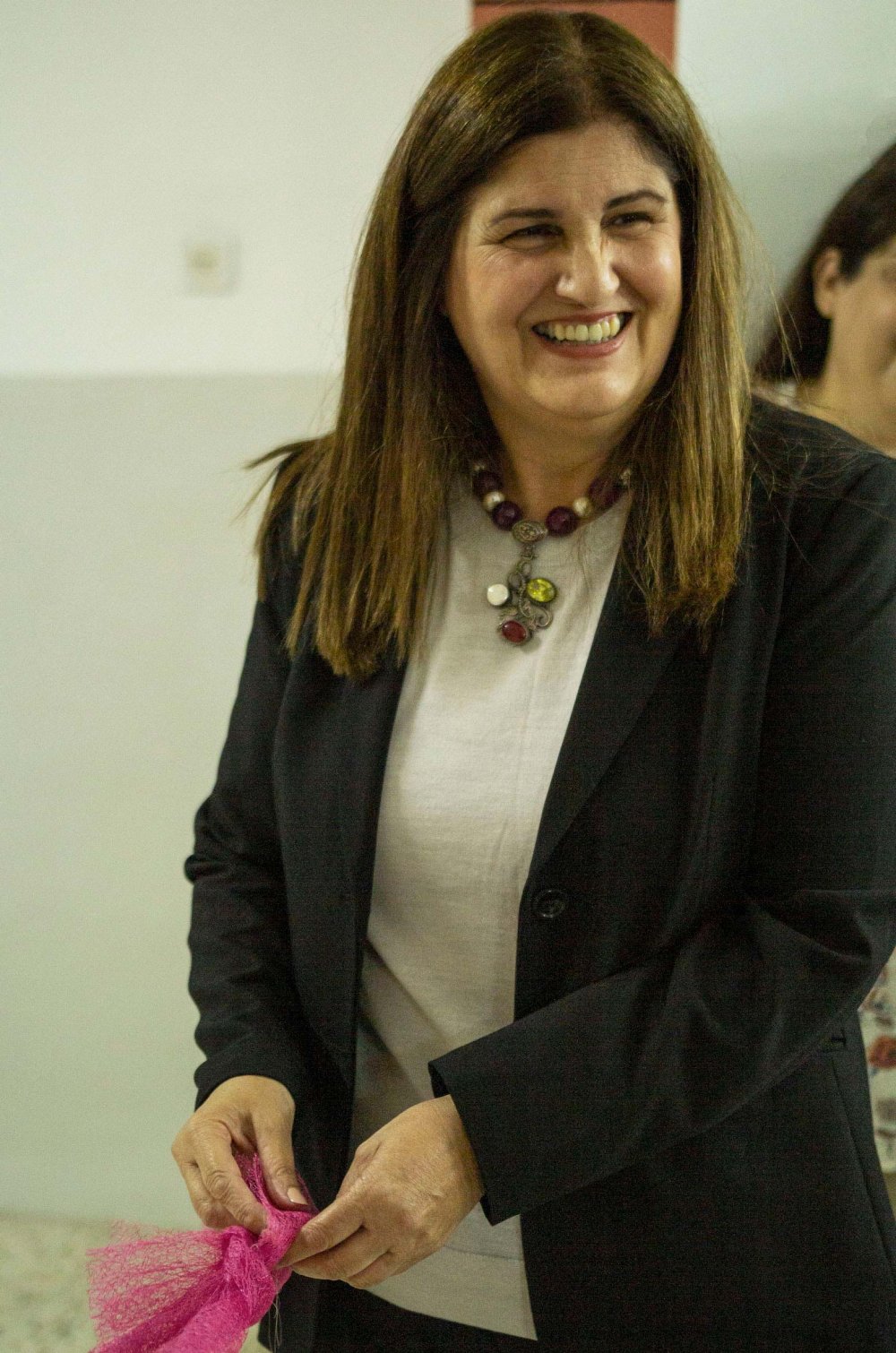 Dr. Varsen Aghabekian, author of A Palestinian Armenian: The Intertwine between the Social and the Political, at the book launch event on October 22, 2021

An Armenian Palestinian herself, author Aghabekian has had a leading role within the Palestinian community.

The author shared that it took her six months to complete this book. An Armenian Palestinian herself, Aghabekian has had a leading role within the Palestinian community. She has authored several studies, manuals, and reports—particularly on Jerusalem, health, education, youth, and women. She served as member of several boards, including the Independent Palestinian Commission for Human Rights (2006–18), of which she served as Commissioner General for the final three years. She also worked at the Office of the Palestinian President as Project Manager—Capacity and Institution Building. She was Associate Professor at al-Quds University School of Public Health and Faculty of Health Professions (1988–2008), as well as Dean of Health Professions (1995–98) and Dean of Graduate Studies (1998–2000) there. She is currently a consultant for several projects, including the Palestinian Negotiations Support Project. 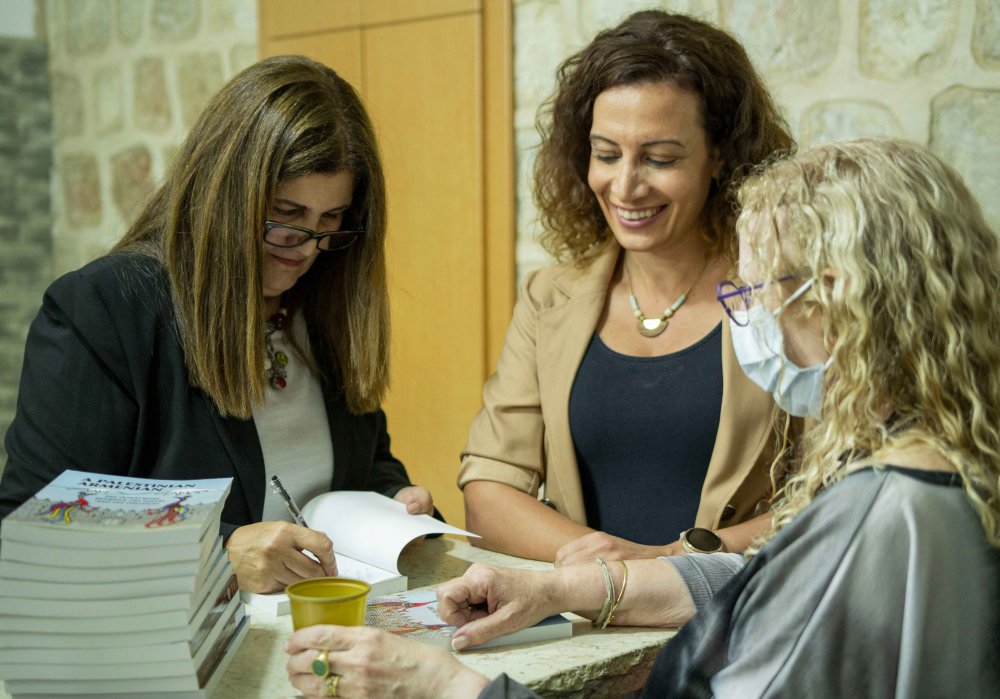 Dr. Varsen Aghabekian signs copies of her book, A Palestinian Armenian: The Intertwine between the Social and the Political, at the book launch event in the Old City of Jerusalem, October 22, 2021.

Aghabekian’s newly published book, as the title suggests, explores the interrelationships between the social and the political, as well as between the personal (individual) and the collective. It provides background and history on Armenia and Armenians, and more specifically about the Armenian presence in Palestine.

More importantly, the book lists the contribution of Armenians in Palestine (with a focus on East Jerusalem) over the last century. In some ways, the book serves as a directory of Armenian contributions in Palestine, among the most crucial of which have been in the areas of photography, medicine, nursing, education, and ceramics.

The book serves as a directory of Armenian contributions in Palestine. 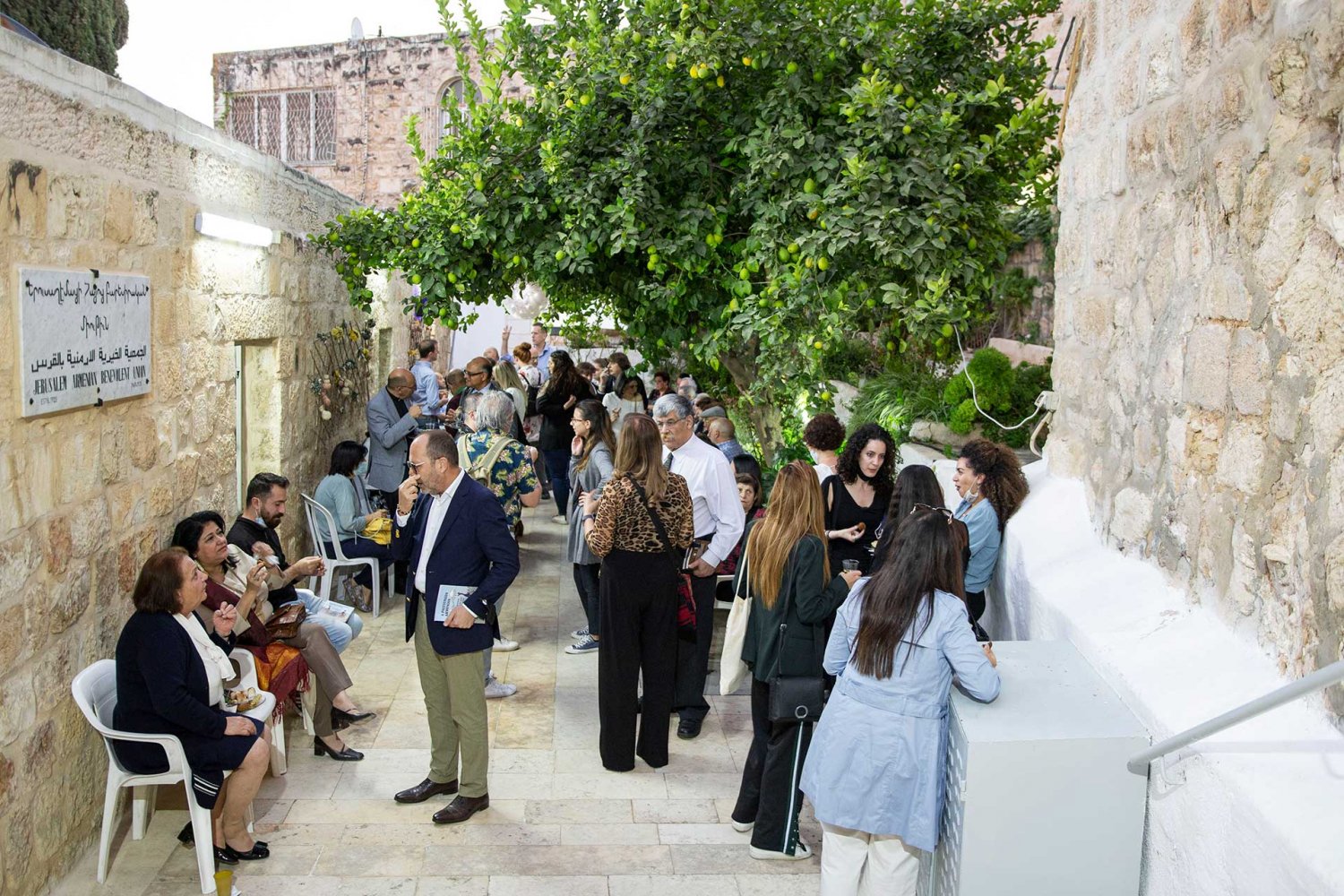 After the event, guests chatted on the outdoor patio of the venue, the Jerusalem Armenian Benevolent Union (est. 1925), in the Old City of Jerusalem, October 22, 2021.

While speaking on the panel during the event (as well as in the book itself), Aghabekian differentiated between the “local/of town Armenians” and the “refugee/survivor Armenians living in the Convent.” By refugee Armenians, she was referring to Armenians who fled the Armenian Genocide of 1915 and sought refuge in Jerusalem’s Old City. The survivors of the Armenian Genocide, as Aghabekian described, “rose from the ashes of hell.”

This differentiation between the “local” and “refugee” Armenians is critical, as it brings light to the fact that the Armenian community is not a foreign entity in the Holy Land. Rather, Armenians have always had a prominent presence in Jerusalem, with roots and critical contributions that go back thousands of years.

In his introductory remarks, Dr. Rev. Mitri Raheb echoed this, saying, “The Armenian presence in Palestine/Jerusalem goes back 16,000 years.” He also shared that Jerusalem is the most ancient diaspora of Armenians outside of Armenia and historic Armenia itself.

The Armenian community in Jerusalem today, however, is dwindling, much like the Christian community in general, and it “is in peril in the Holy Land,” Aghabekian warned. It is believed that two-thirds of Armenians in the Holy Land, thousands of whom had fled to Jerusalem from Armenia following 1915, were forced to flee again in 1948. Many others emigrated after the 1967 War.

“The Armenian presence in Palestine/Jerusalem goes back 16,000 years.” 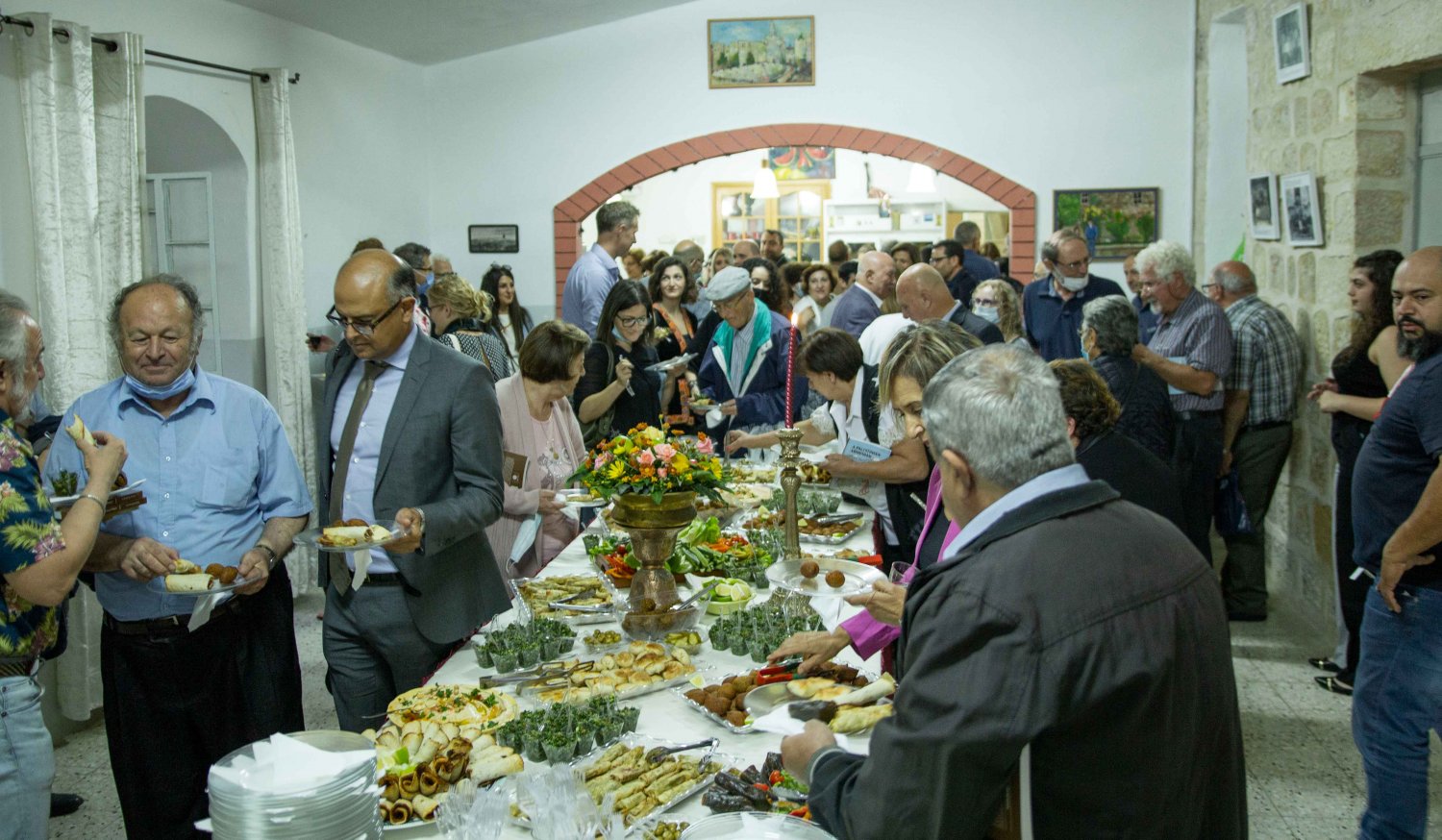 The panel of distinguished speakers at the book launch was followed by a reception at the Pari Siradz Club in the Armenian Quarter, in the Old City of Jerusalem, October 22, 2021.

Despite the hardships, the book launch ended on a positive note as it reemphasized the importance of preserving Armenian history and narrating the Armenians’ stories.

Some attendees had difficulty finding the venue location inside the Armenian Quarter, which makes up one-sixth of the Old City of Jerusalem.

At the end, as people were departing, some were overheard to say: “We need to get better acquainted with the Old City of Jerusalem.”

This sentiment of the need to know more about the intricate details of Jerusalem was shared along the side conversations that followed the panel. “We in Jerusalem need to value our oral history,” remarked historian George Hintlian. He emphasized that sharing accounts such as the one  Aghabekian wrote is essential to documenting the narrative of Palestinians.

“We in Jerusalem need to value our oral history.”

The Armenian boy who was sold as a slave would provide Jerusalem with a treasure of historic photographs.

Jerusalem’s historian and defender of academic freedom, who fought to preserve the city’s diversity and plurality