I was six years old when I knew high school wasn’t for me. When my father took me to school and signed me up to first grade, I knew it was not my environment. It did not take me long to realize I had been right: The school system aimed to mold us into copies of one another—instead of having us evolve into the creative beings that we are.1

Yacoub Abu Arafeh, now almost 60 years old, has maintained the same unrepressed creativity and sense of wonder he had when he was young. As a child, he resented rote learning and the didactic methods of schooling so much that he dropped out of high school by grade 11. This was in 1986, one year prior to the First Intifada. Ironically, the child who had no use for formal education would later become an educator—perhaps out of a belief that he could engage and inspire children better by using a different approach. 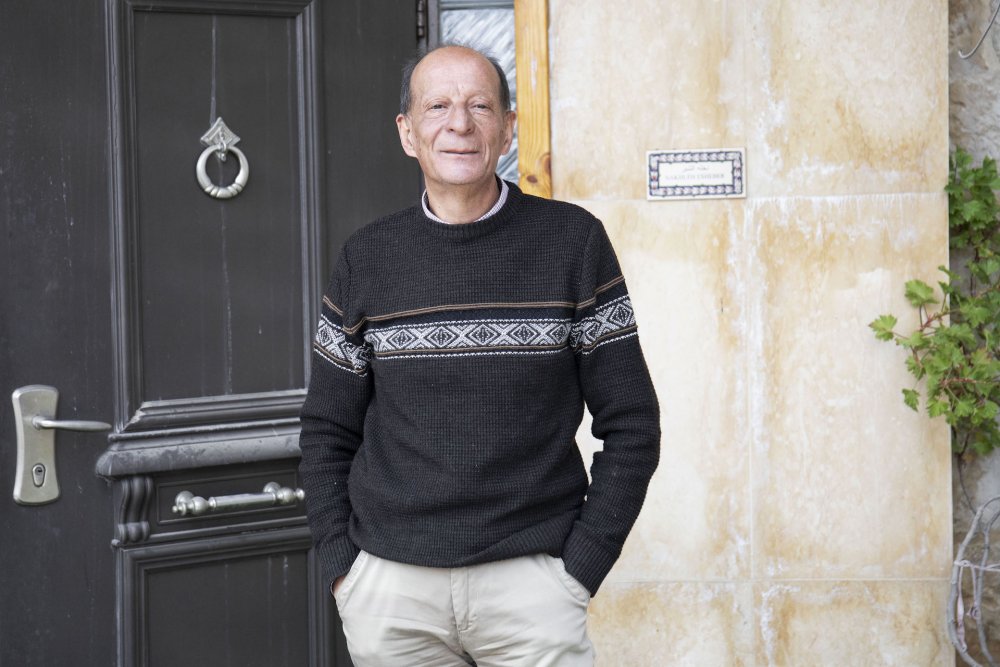 Passion for Music and Creativity

Born in the Sheikh Jarrah neighborhood of Jerusalem on April 14, 1962, Abu Arafeh has had a passion for music and creativity ever since childhood. Already at the age of six, he harbored a grudge against the dull and unimaginative structures of education. However, he very much appreciated music classes and enjoyed taking part in theatrical performances at school. He was particularly fond of drumming, which is a skill that his music teacher recognized in him from a young age.

Abu Arafeh would go on to pursue music at a professional level. When he was growing up, there were no music institutes, let alone support or encouragement for pursuing artistic ambition. Yet he managed, in 1983, to connect with a contemporary music group, Sabreen, which was developing a modern form of Palestinian music. The band was founded in 1980 by Said Murad; Kamilya Jubran was the lead singer. The band’s talented members used traditional oriental music and Palestinian folklore and mixed it with a touch of jazz and rock. They combined the lyrics of struggle with a fusion of classical oriental and contemporary Western sounds.

Abu Arafeh played the Middle Eastern percussion as well as the electric drums. He personally created a prototype drum set. The handmade “Arab drum” comprised a percussion made up of Eastern drums combined with other types that made the final sound stand out in performance.

Sabreen’s music reflected the different episodes of struggle in Palestinian history, particularly in connection with the struggle for self-determination, revolution, social change, and freedom. Sabreen would go on to produce five albums, and the band members—including Abu Arafeh—became distinguished for the unique blend of music and cultures they brought to life. Abu Arafeh remained with the band until 1991.

The neighborhood of Sheikh Jarrah has historically been the northern gateway to the Old City and a home to powerful Palestinian families and consulates.

An Educator Is Born

An avid reader with a critical mind and inquisitive nature, Abu Arafeh started reading as a child and never stopped. He was especially attracted to the works of the Algerian writer Tahar Ouettar and Palestinian educator Khalil Sakakini.

In the early 1990s, Abu Arafeh joined forces with the TAMER Institute for Community Education, an educational nongovernmental, nonprofit organization established in 1989 in Ramallah to promote safe and friendly learning environments for children. It emphasizes reading and learning opportunities for children, young adults, and groups that work with them. Abu Arafeh has worked with the TAMER Institute on various music and educational activities. He also became a music tutor, assisted in projects with Rozana Association for Rural Tourism, and taught at Palestinian institutions including at the Education Department of Bethlehem University and at St. Dimitri's High School (Mar Mitri) in Jerusalem.

After gaining first-hand experience  in artistic education, Abu Arafeh concluded that “the easier path by which to promote learning and reading for larger masses of people would be the platform of theater.” With this conviction in mind, Abu Arafeh would go on to have a major role in creating the first Palestinian traveling puppet show, whose star character was a child named Nakhleh Esheber.

In 1986, the Palestinian National Theater al-Hakawati was undergoing a financial crisis. In a brainstorming session that year, art director Abu Arafeh and Fateh Azzam (a Palestinian playwright and then member of al-Hakawati’s General Assembly) saw the need to come up with a character on-the-go to help the cultural center get back on its feet.

“Out of nothing, the two of us brought Nakhleh Esheber to life,” Abu Arafeh recalls. Nakhleh Esheber would personify Palestinian kids who have big ideas. His first name, Nakhleh, translates to “a date tree,” suggesting a tall, fruitful, and protracted supplier. Shiber is the span between the thumb and pinky of an outstretched hand, a fairly limited range. The name Nakhleh Esheber conveys a contradiction: big dreams coupled with limitations.

To create the character of Nakhleh Esheber, Abu Arafeh and Azzam started with the clothes he would wear.

In a creative rush one memorable night in 1986, they found a pair of shorts, suspenders, and a t-shirt, and they decided that this would be the character’s outfit. Behind the prop, Abu Arafeh’s hands provided the puppet’s legs and Azzam provided its hands. “The legs are hands, and the hands are someone else’s. Nakhleh Esheber is full of contradictions, and these contradictions epitomize the reality of Palestinian children,” Yacoub explains. “The message behind it is to encourage children to dream and be creative in spite of their limited means.” 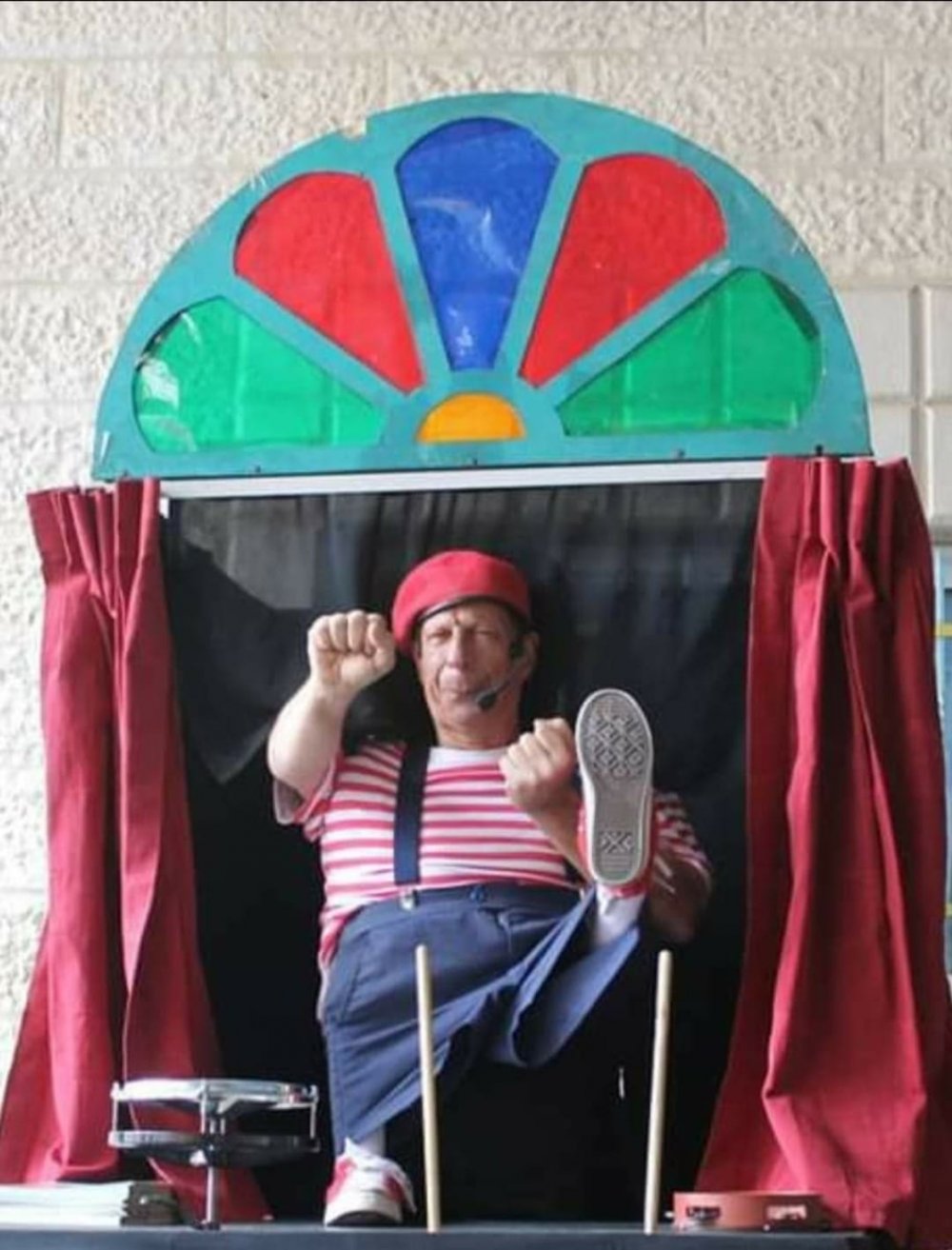 A live performance featuring Yacoub Abu Arafeh as the Nakhleh Esheber character, in Jerusalem in December, 2020

The puppet show was known by the name of the lead character. Nakhleh Esheber was the first puppet show performed in 1989 at al-Hakawati. Since then, Nakhleh Esheber has become a popular persona who resonates with countless Palestinian children. Most often, other actors join the show and ask Nakhleh Esheber questions that he answers as a simple kid with humor—thereby educating children on their rights. At times, children  have also joined him in TV performances. The show has been taken to cities and venues around Palestine.

“The kids did not have to come to us; we went to where they were,” Abu Arafeh  explains. Not only was the show enjoyed by children, but Palestinians at large (including prisoners) enjoyed his performances.

Soon after, magazines, drawing books, and other reading material were produced in the character’s name. In 1999, the Nakhleh Esheber Institute was established in Jerusalem, close to the Sheikh Jarrah neighborhood. It contributes to developing artistic and educational works for Palestinian children in ways that are interactive, entertaining, and creative. 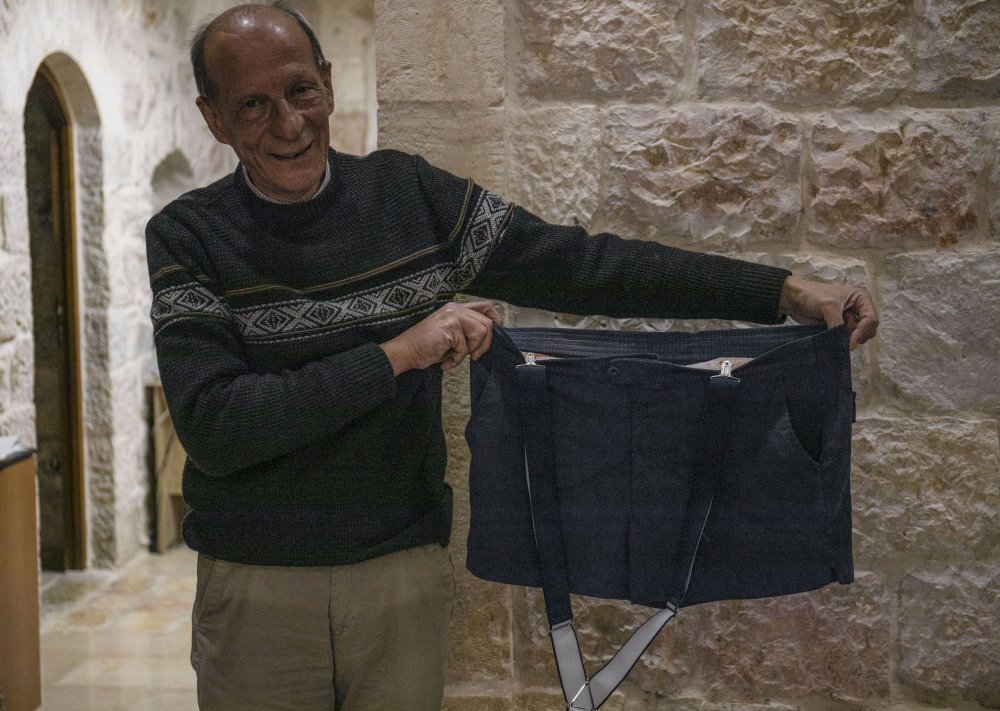 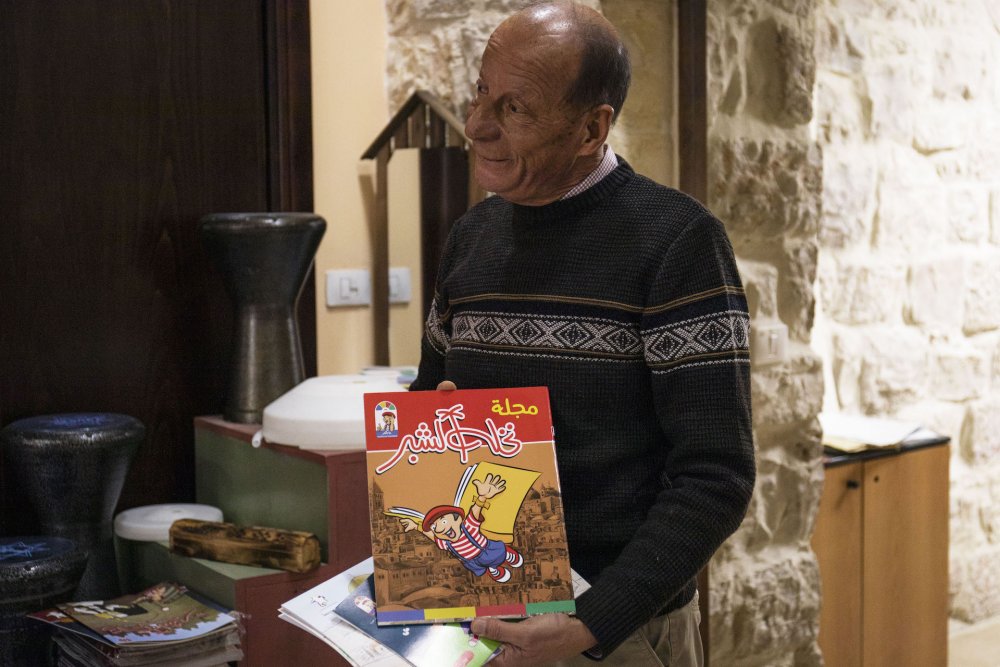 In addition to creating the Nakhleh Esheber persona, Abu Arafeh has had important roles in acting and music performances. In one skit performed in the 1990s, he famously mimicked Captain Yacov, an Israeli intelligence officer who waited until his retirement to join activities promoting human rights, after he had spent his career abusing Palestinian human rights. Using satire, the actor managed to show the hypocrisy of the captain’s newfound beliefs.

Abu Arafeh had an acting role in Rihlat al-Bahth ‘an Umar al-Khayyam (In Search of Omar al-Khayyam), which was produced by al-Hakawati and directed by François Abu Salem in 1990. The play resurrected historical Arab figures and had them converse about contemporary political reality. 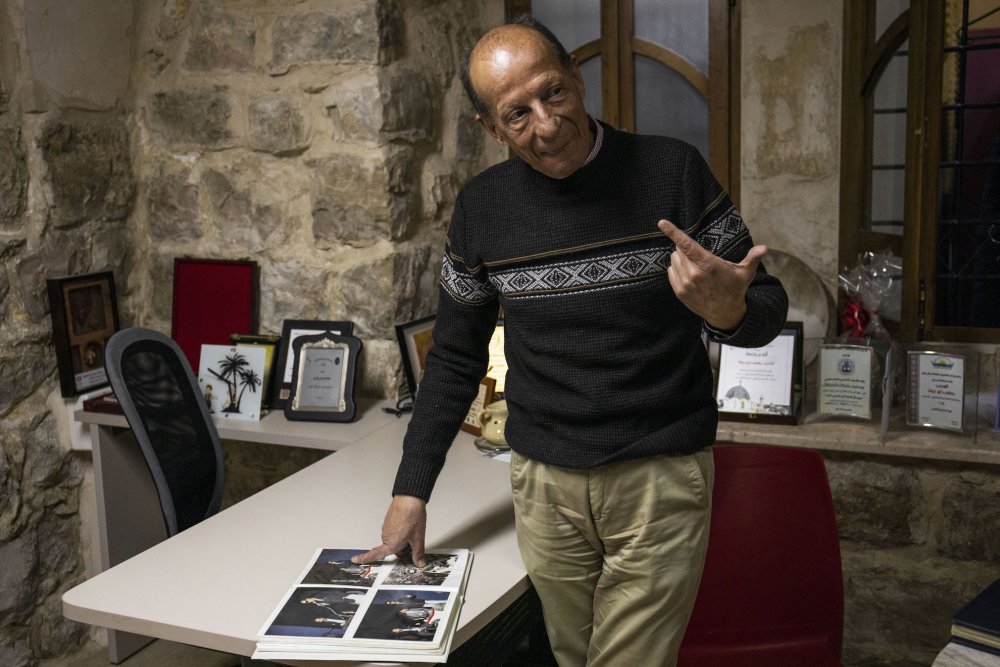 Abu Arafeh also had music and acting roles in European political theater. He was part of the cast of the play The Gulf Between Us, written by English playwriter Trevor Griffiths. It was the first play about the Gulf War, written in the aftermath of the war; it premiered in Leeds in 1992. The play was about two builders in an unnamed Arab country (most probably Iraq) who were trapped on the outskirts of a city at war. With sirens and missiles whistling around them, they had to protect an ancient shrine by building a wall. This play included a mix of actors from Palestine and the United Kingdom. Abu Arafeh played one of the Ancients and played the drum during the performance.

Abu Arafeh received music training in several countries, including Italy and Sweden. Thanks to his talents and great artistic potential, he had the opportunity to stay abroad but could not imagine living anywhere other than Jerusalem. He invested his energy and efforts toward contributing to his society and insisted on his right to stay in his city and his home.

Since 1972, Abu Arafeh has been under threat of expulsion from his family home.

Stand Up with Integrity

Abu Arafeh became known not only for his artistic endeavors but also for being one of the hundreds of Palestinian Jerusalemites from the Sheikh Jarrah neighborhood under threat of forcible expulsion.2 Having been born and raised in his home in Sheikh Jarrah, Abu Arafeh and his family have had to struggle for almost 50 years in battles with the Israeli authorities to live in their house. They were among the families who moved to that area of Jerusalem as refugees after the 1948 War as part of the United Nations Relief and Works Agency for Palestine Refugees in the Near East (UNRWA) resettlement project. In return, they were forced to give up their refugee registration card, which would have granted them benefits such as educational and medical services.

After the 1967 War and the Israeli occupation of East Jerusalem, complications arose when the families learned that Jewish associations claimed to own those properties, which had been taken over by the Jordanian Custodianship. Since 1972, there have been court cases between the Palestinian residents and the Israeli settlers claiming the properties. Most recently, Israeli police have been forcibly expelling longtime Palestinian residents from the Sheikh Jarrah neighborhood.

Abu Arafeh became known not only for his artistic endeavors but also for being one of the hundreds of Palestinians from Sheikh Jarrah under threat of forcible expulsion. 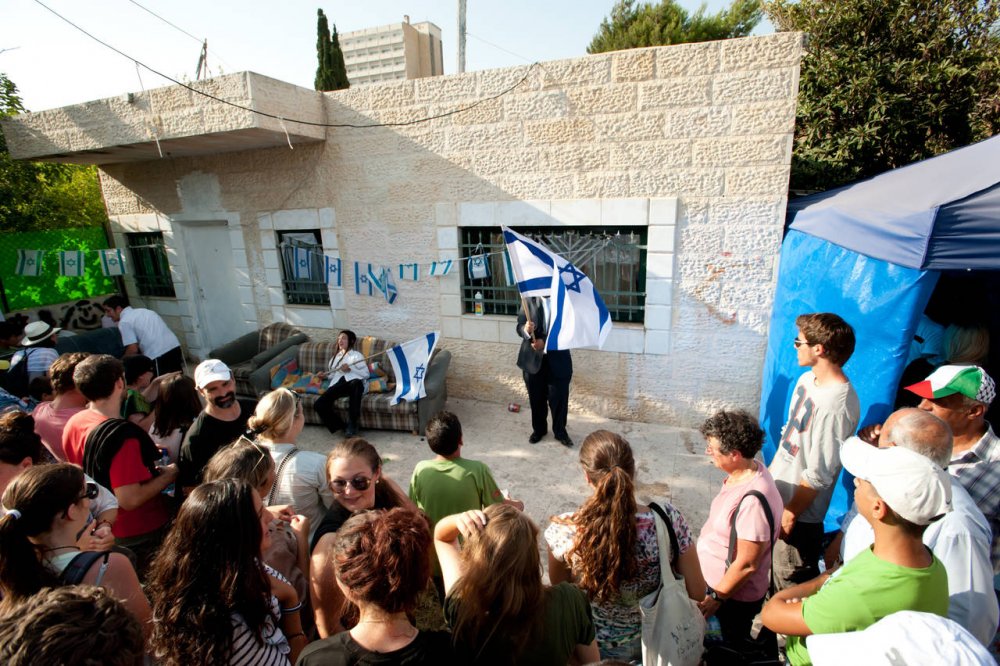 Protesters confront Jewish settlers who forcibly evicted a family from their home in Sheikh Jarrah and now live in it, July 29, 2011.

Abu Arafeh is an active member of the Civic Coalition for Defending Palestinians’ Rights in Jerusalem. Through various media outlets, interviews, and demonstrations, he has insisted on the right of Palestinians in Jerusalem to stay in their homes.

Having been born and raised in his home in Sheikh Jarrah, Abu Arafeh and his family have had to struggle for almost 50 years in battles with the Israeli authorities to live in their house.

As someone who has lived under Israeli occupation almost his entire life, Abu Arafeh has reached the conclusion that “a self-aware, well-read, and critical person is more frightening than those claiming to be rebellious.” He has been vocal about his views and has worked to garner support for the Palestinian cause in general and for the residents of Sheikh Jarrah in particular.

Abu Arafeh maintains his conviction that art is not a frivolous act. “It bears a critical, educative, and revitalizing message,” he stresses. He stays dedicated in his mission to encourage children and youth to express their creativity and reach their goals and ambitions, no matter how limited their means. As epitomized in the character of Nakhleh Esheber, the message is that a small size can harbor a towering potential.

Award-winning Palestinian filmmaker and producer Ihab Jadallah revisits his favorite childhood place as part of our series on Jerusalemites’ favorite places in the city.

Americans are heavily involved in settler aggressions against Palestinians in Jerusalem that result in their dispossession.