Skip to main content
View more on
Who Are the Palestinians of Jerusalem?
View more topics under
Foundations
View more on this topic
Photo Album

“Present Absentees” Look Back: A Jerusalemite Family’s Journey from West to East, 1930–2021 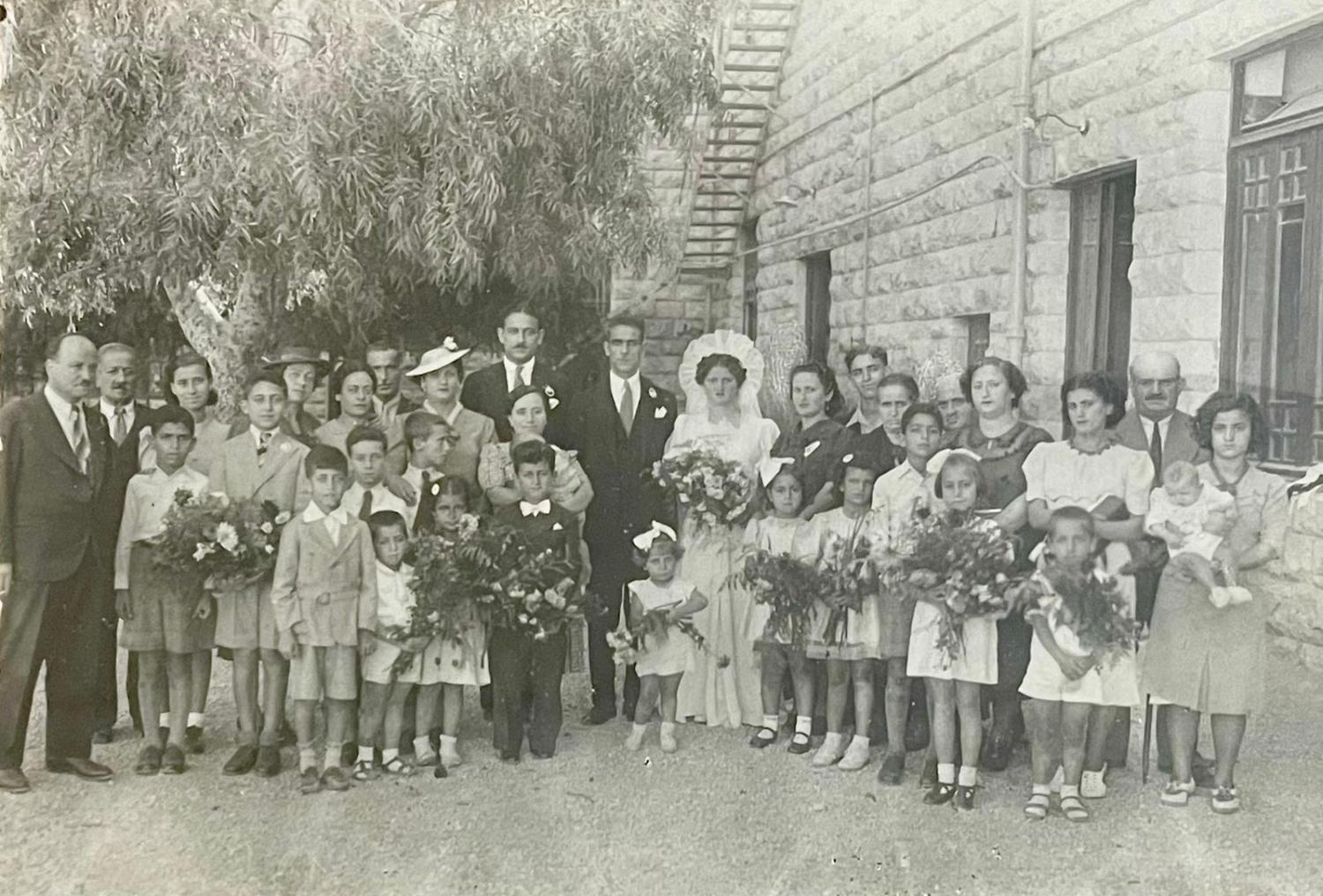 Wedding of Zachariah and Marguerite Sabella, 1939. The wedding took place at the Terra Sancta Franciscan Church on Kings Street in West Jerusalem. Zachariah was 41; Marguerite, 17. Zachariah worked for the municipality of Jerusalem under the British Mandate. 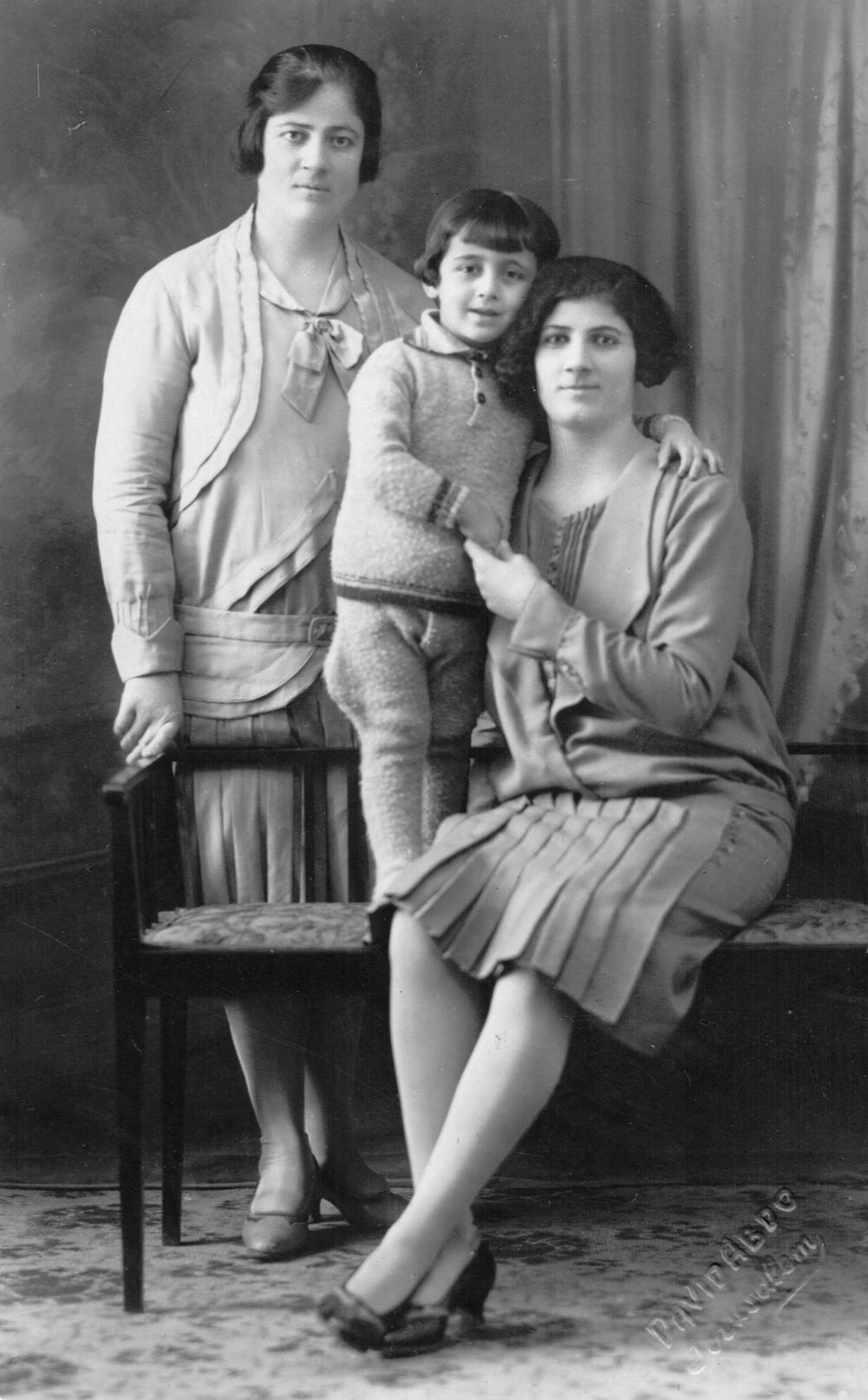 Pre-Nakba generation: Bernard’s Aunt Mary, Aunt Hanneh, and Cousin Joseph, 1930s. The Sabella women are elegant dressers and appear comfortable in front of the camera. The photograph is in the style of portraits that were popular at the time. 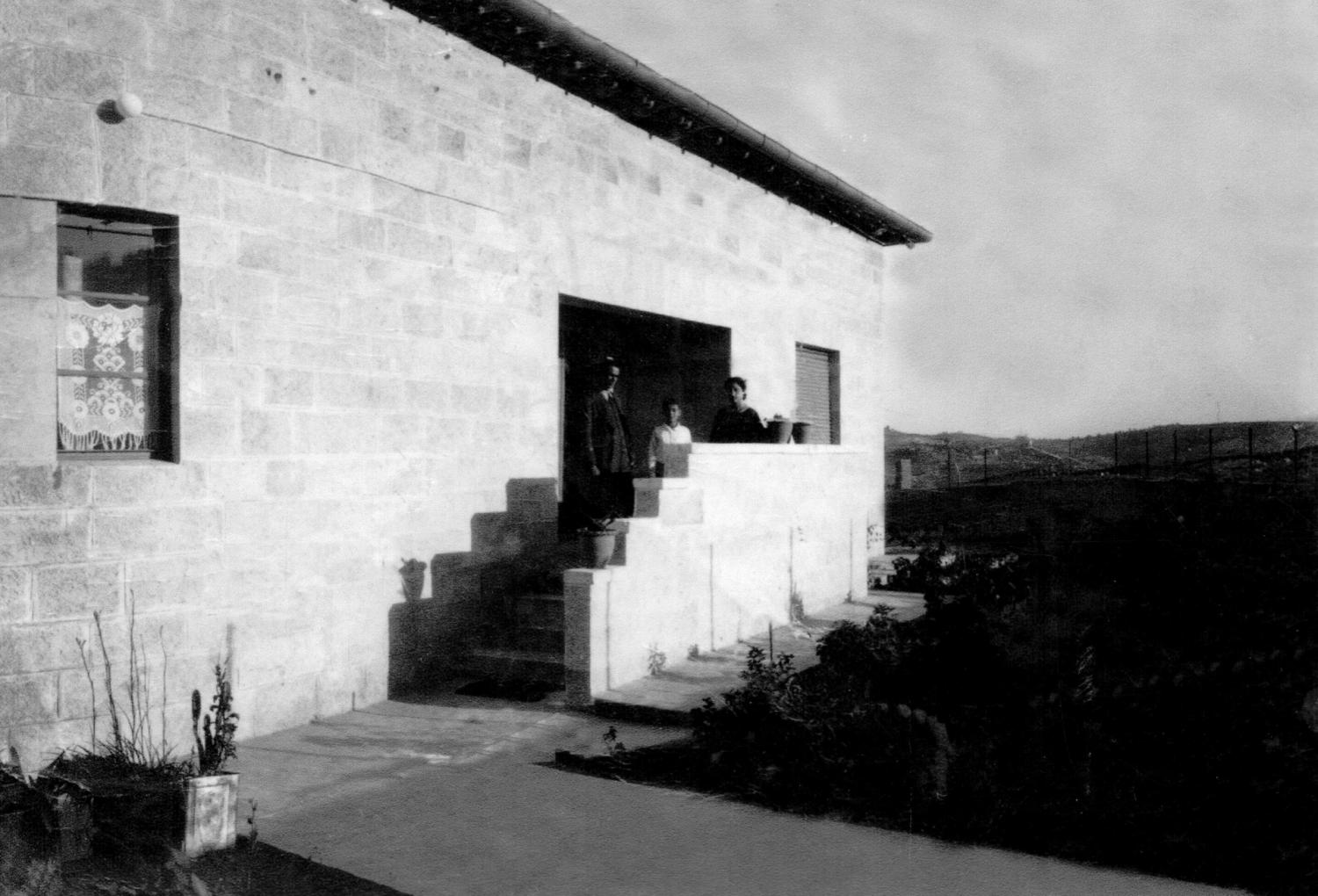 Home in Qatamon, early 1940s: The family home, painstakingly built in 1937 by Bernard’s father before Bernard was born, had a modern design and overlooked the city. The architectural design reflects the family’s socioeconomic status and the modern and Western lifestyle they enjoyed. On the steps: Bernard’s father, Cousin Joseph, Aunt Leonie 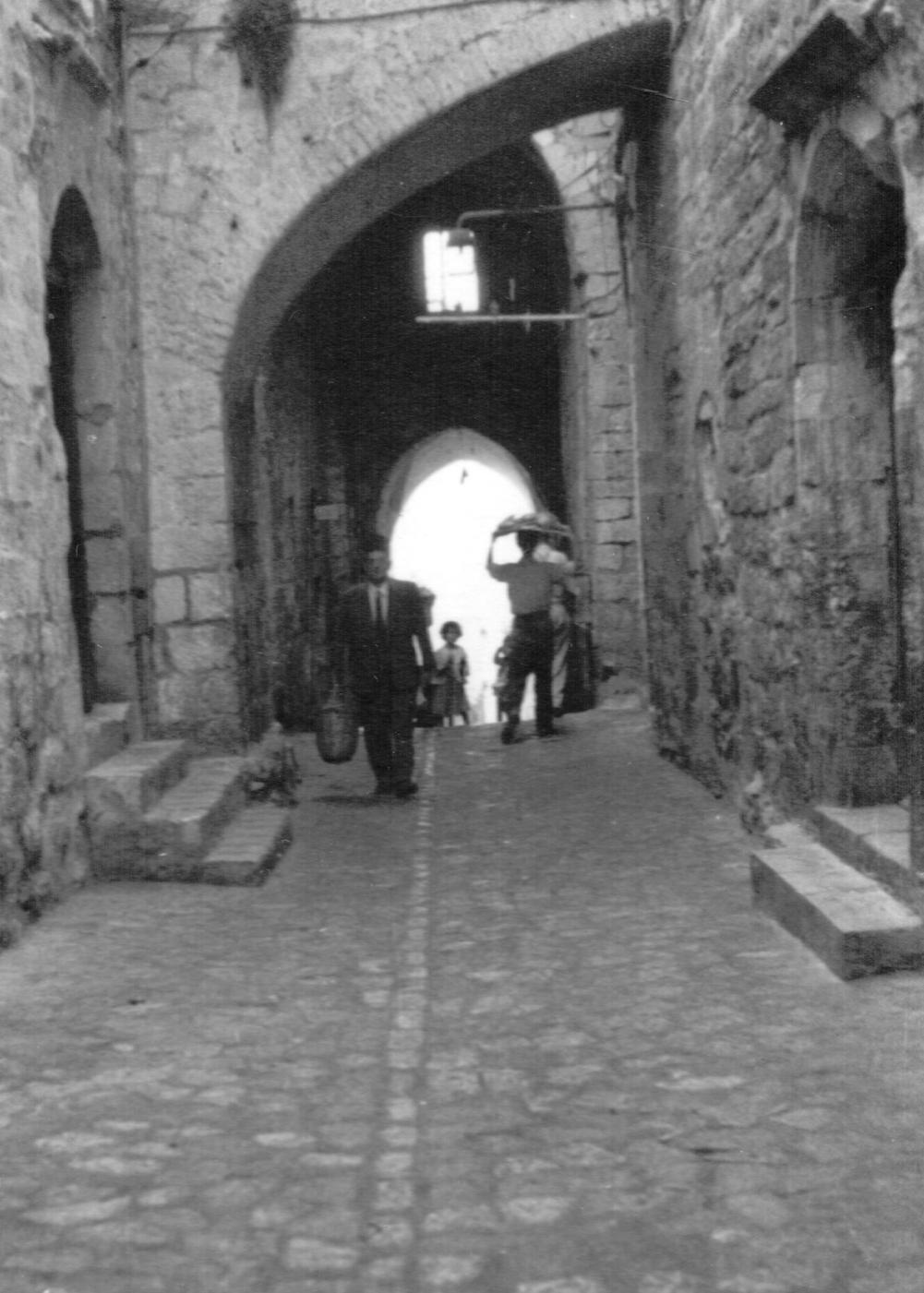 Postwar accommodation: Street scene of the living quarters in the Old City, a world apart from Qatamon. After the war, the family spent a year in exile in Lebanon, returned to Bethlehem for a year where they lived nine to a room, and then moved to a two-room section of a large home in the walled Old City and had to adapt to a more crowded, noisy, and less lavish life. 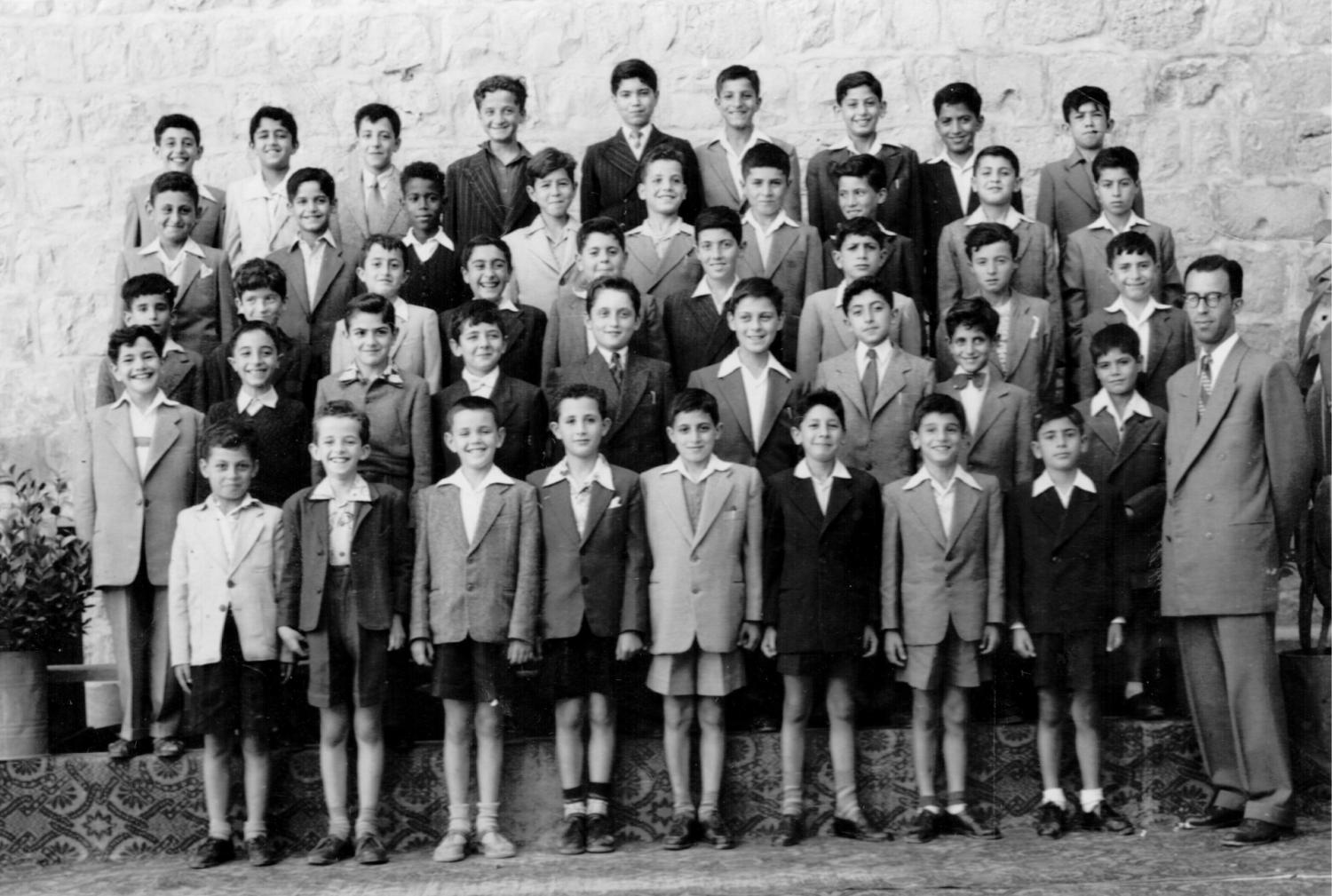 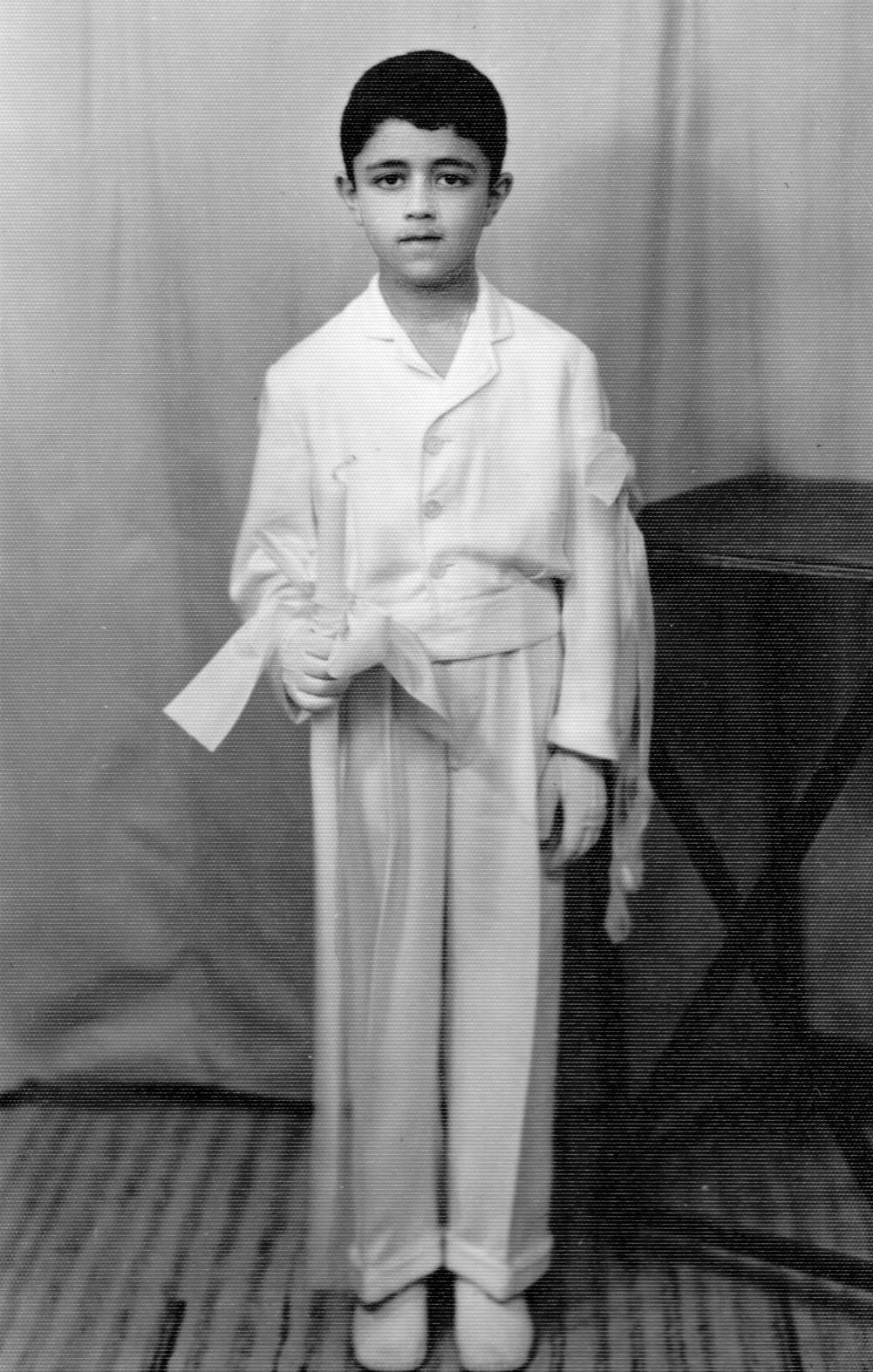 Bernard’s first communion, 1956: After the war, the family tried to retain a sense of normalcy by celebrating holidays and religious festivities with their community. 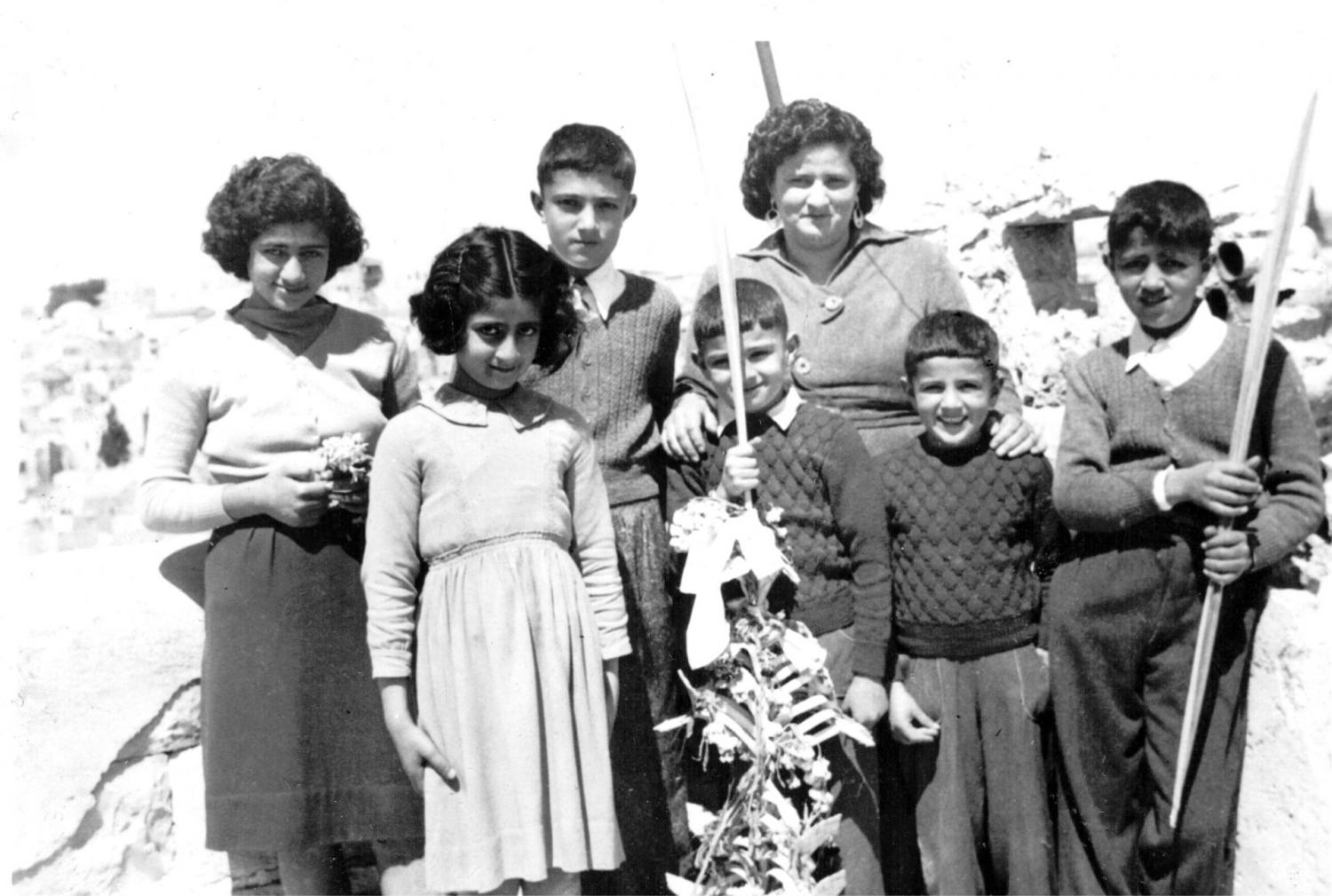 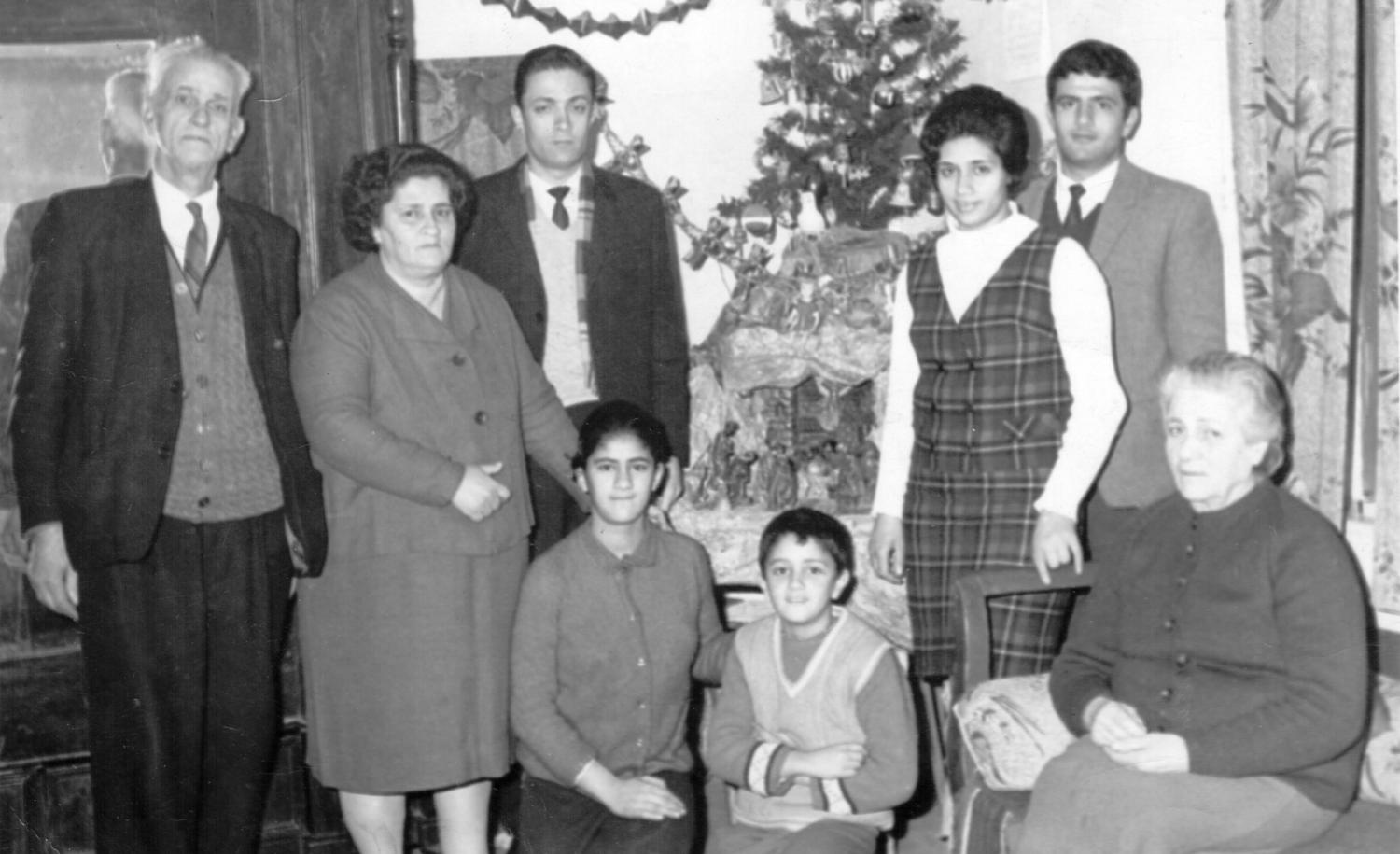 Christmas in Jerusalem, 1960s: Despite the challenges, Bernard’s parents tried to maintain a similar lifestyle to the one they previously enjoyed in Qatamon. 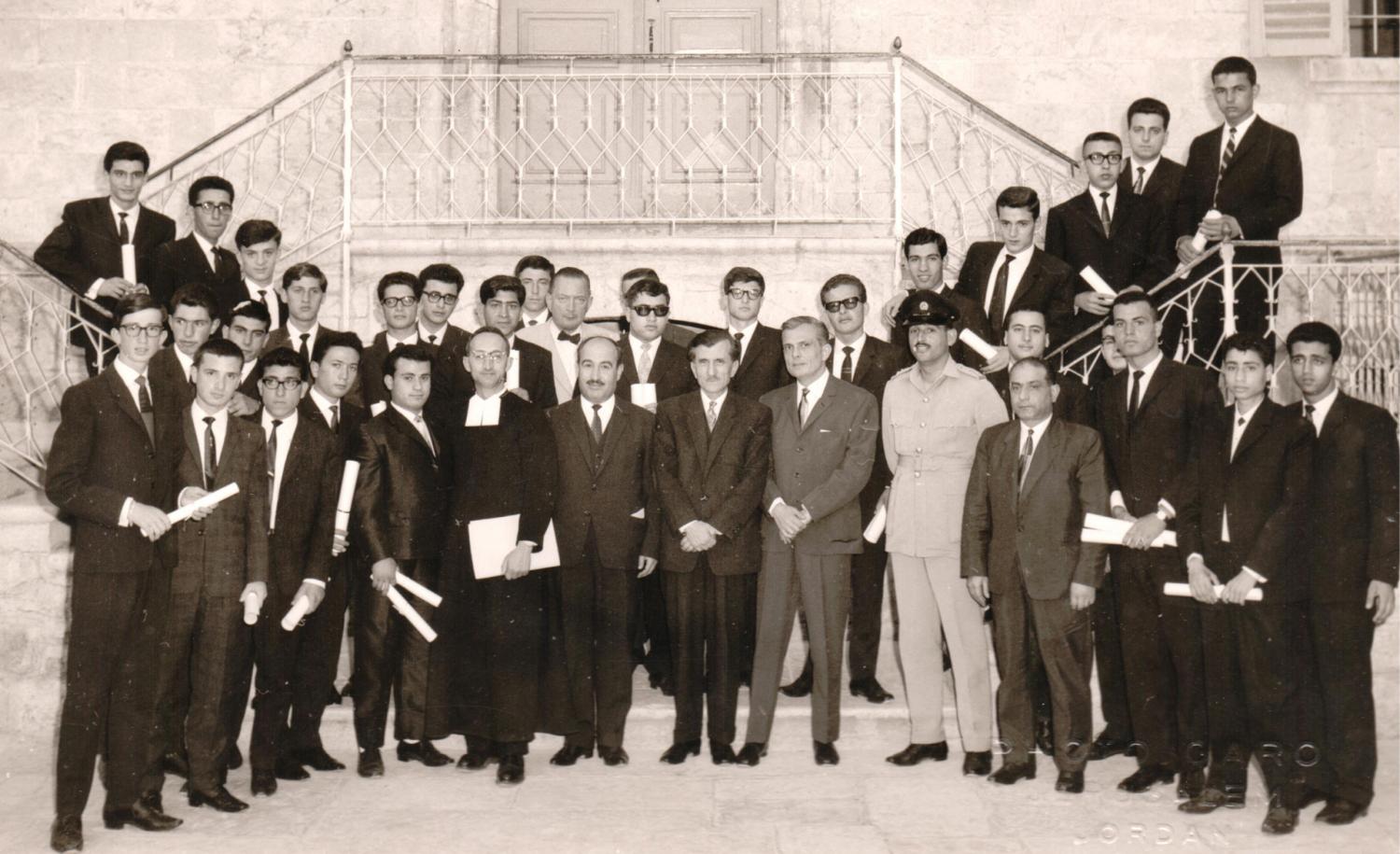 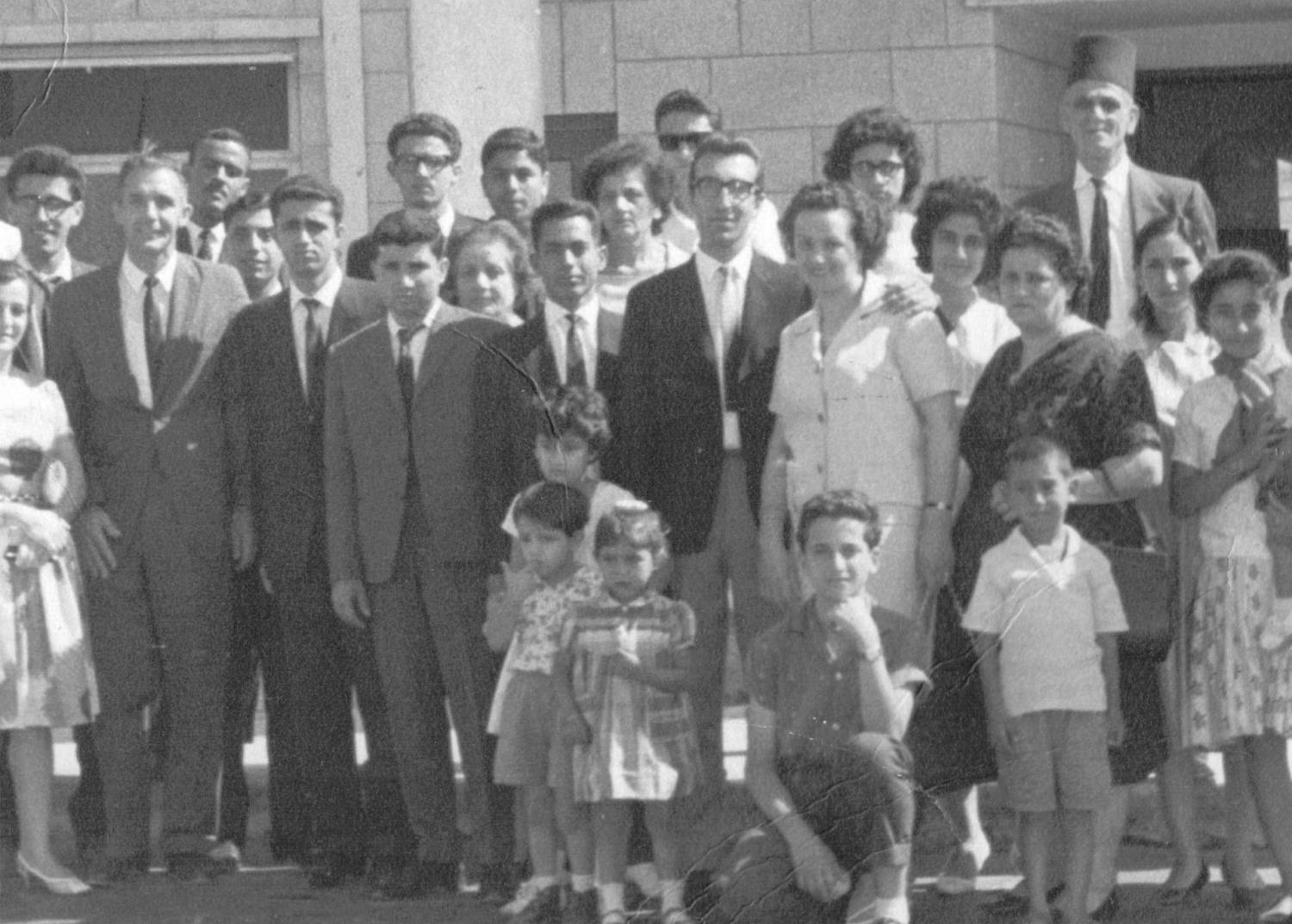 At the Jerusalem Airport, 1964. Bernard’s family see him off as he departs for the US, where he plans to pursue a college education. (The airport, which formerly connected Jerusalem to the world, is no longer operational and pending destruction and replacement by an Israeli settlement.) (See Video: Five Minutes from Home.) 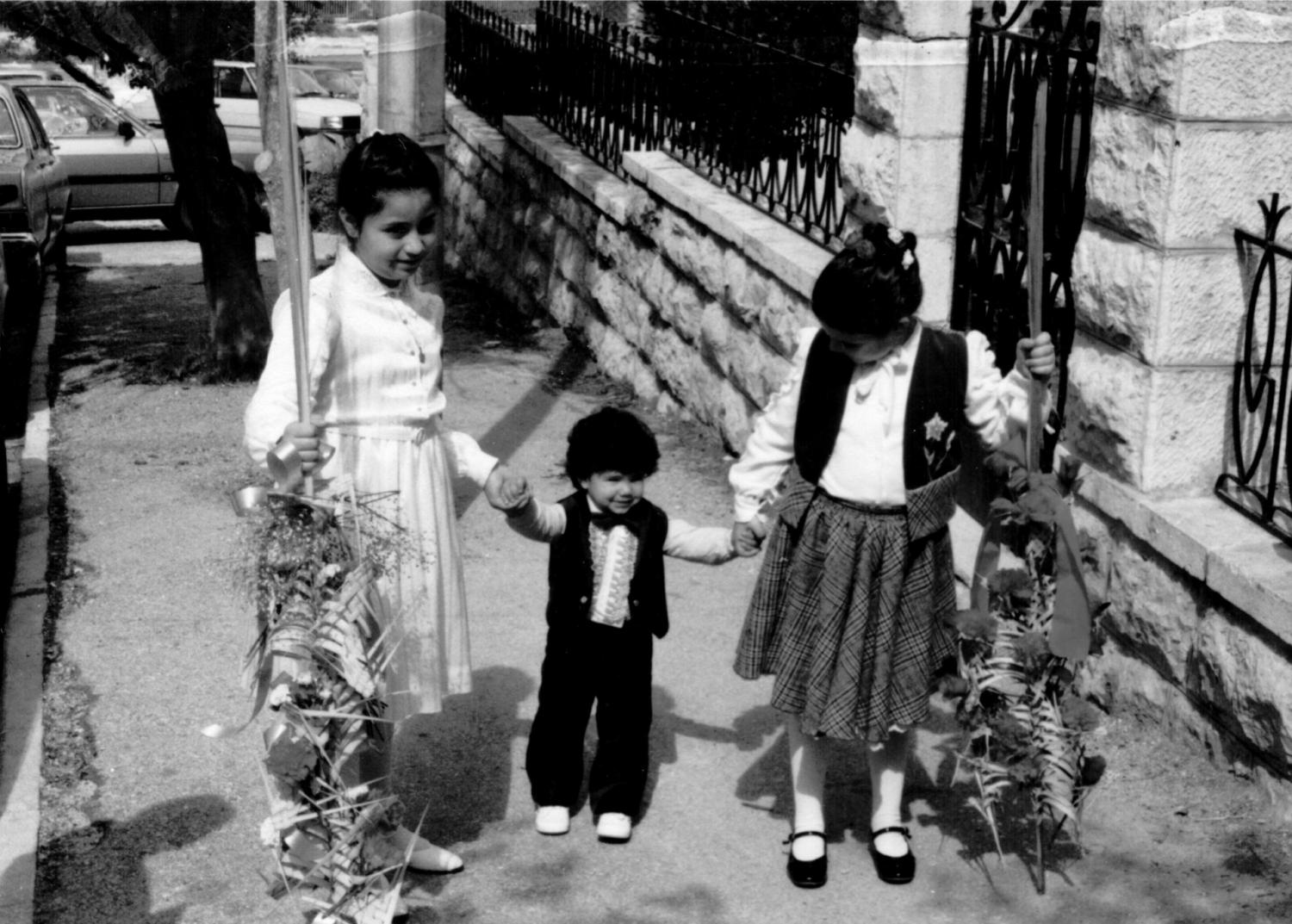 Next generation: Bernard’s children, Margo and Zack, and a neighbor after Palm Sunday service. Family traditions as practiced in Jerusalem are part of what brought Bernard back to Jerusalem from the US and keeps him rooted there. 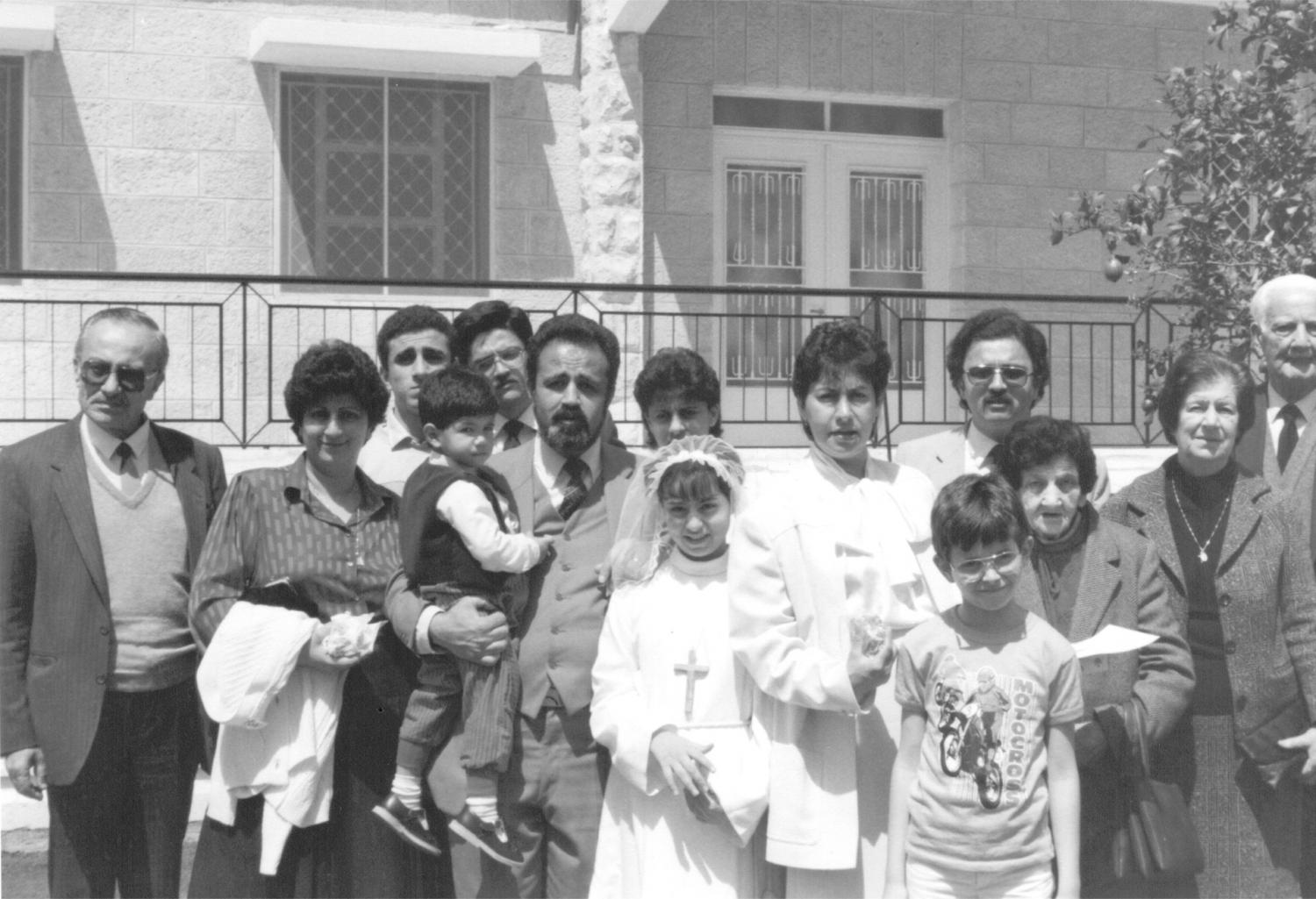 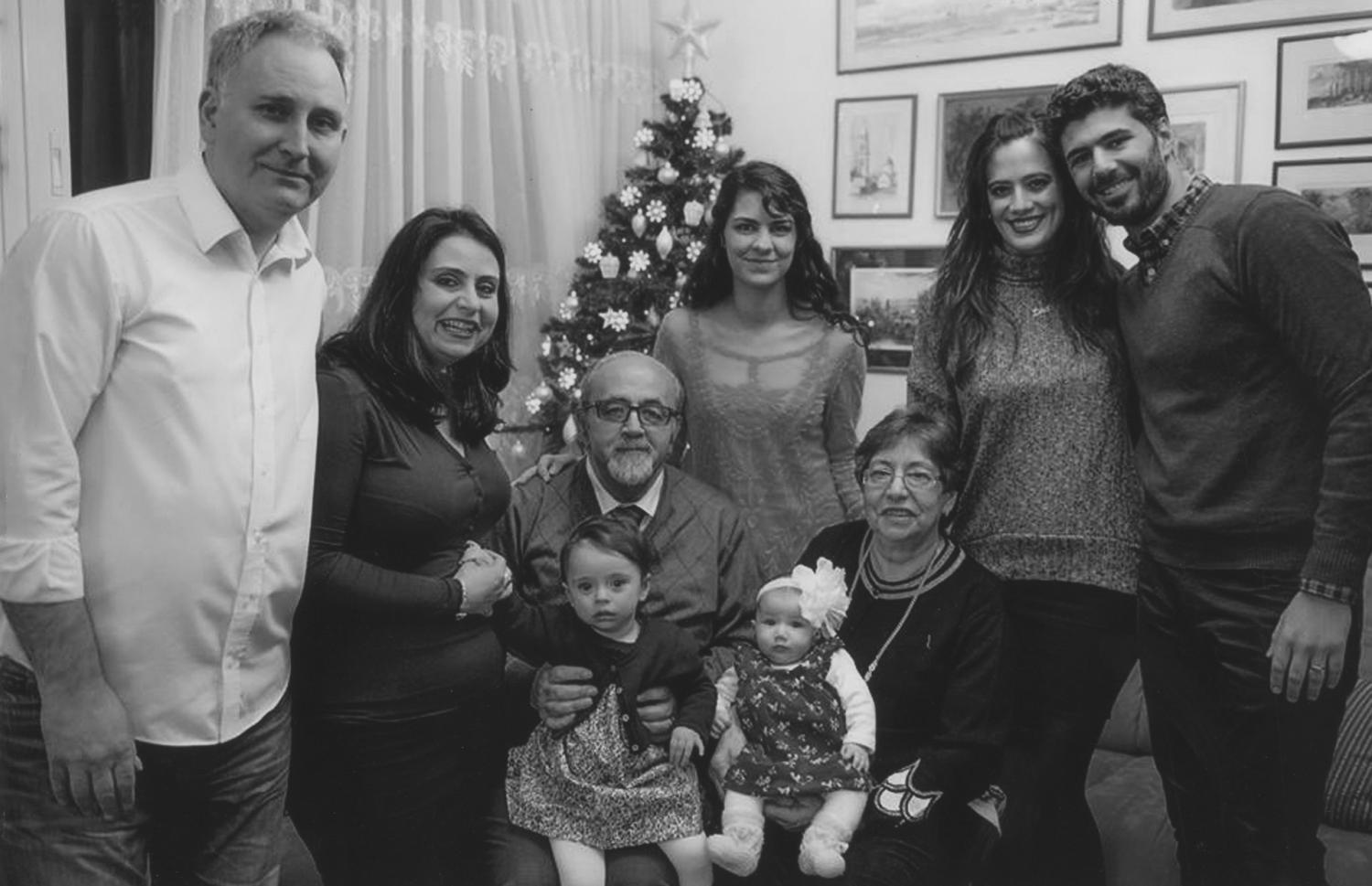 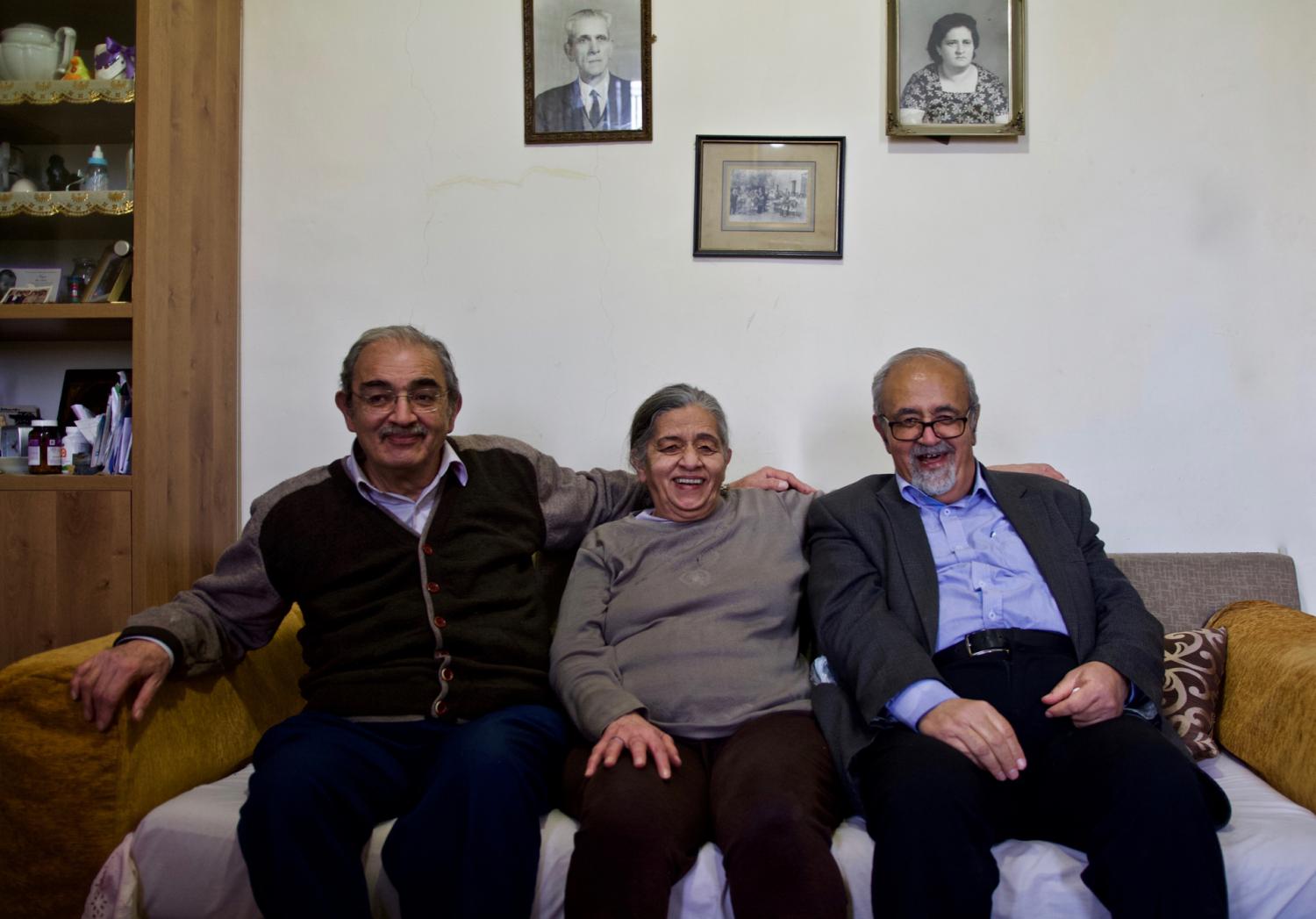 Bernard and his siblings, 2021, with photos of his parents, Zachariyah and Marguerite, hanging on the wall

Abboud Abu Tair for the JSP

The photo album traces the story of the Sabella family over several decades and generations, beginning with the Mandate period. The upper middle-class Sabella family (parents Zachariah and Marguerite, and, at the time, their five children) lived in Qatamon in the Western Corridor of the city (i.e., the New City, which is today called West Jerusalem).

In 1947, as violence was escalating in the city, with five children aged under six, the family left their home seeking what they thought was a few weeks of temporary safety. After a year’s exilic stay in Lebanon, they found their way back to Jerusalem. There was no returning to Qatamon, which fell in the part of Jerusalem that had come under Israel control, or to their home, which had been expropriated by the state Custodian of Absentee Property and transferred to new Jewish immigrants, and so they moved into a single room in Bethlehem for a year. As soon as Zachariah got a job in the Jordanian municipality of Jerusalem, the family moved to the crowded Old City.

Despite losing their home and property during the war, and although their postwar lifestyle was a step down to a more lower middle-class existence, the well-connected family was nonetheless able to educate their children in private schools. Consequently, Bernard was eventually able to pursue an education in the United States and return to Jerusalem with his new family, although he relocated outside the Old City. His siblings still hold on to their childhood home in the Old City, the one in which they originally found refuge and were able to keep after the 1967 War.

When the Sabellas drive from East Jerusalem to Qatamon in now-Jewish West Jerusalem to see their family home, they can still see the cedar tree planted by their uncle and traces of their former life.

What does Jerusalem mean to Palestinians who identify as Jerusalemites? We posed this question to more than a dozen Jerusalemites worldwide.

Personal Story A War without Chocolate

Betty Majaj, a nurse in Jerusalem, lived through the demise of the New City and its reincarnation into West Jerusalem. This is her story.