In the Latest Chapter of the Battle over Palestinian Education in Jerusalem, Authorities Search Children’s Book Bags

Mahmoud Ishaq, a resident of the Old City of Jerusalem, was appalled when he leafed through his daughter’s fourth-grade civic studies book. On the cover was the Palestinian Ministry of Education logo, but there was nothing Palestinian about the pictures and text (and in fact the ministry has denounced the book as a forgery; see samples below).

When Ishaq finished paging through this state-approved “civics” textbook (published with the misleading Palestinian ministry logo) that has been forced on all Palestinian schools in Jerusalem instead of the regularly assigned textbook produced by the Palestinian National Authority, he decided to act.

Ishaq’s child attends al-Ibrahimiyya school, one of the oldest private schools in East Jerusalem. It was one of six schools that was recently warned that if they do not use what teachers and administrators generally refer to as the “fabricated” textbook, their school will be shut down by the Israeli Ministry of Education. 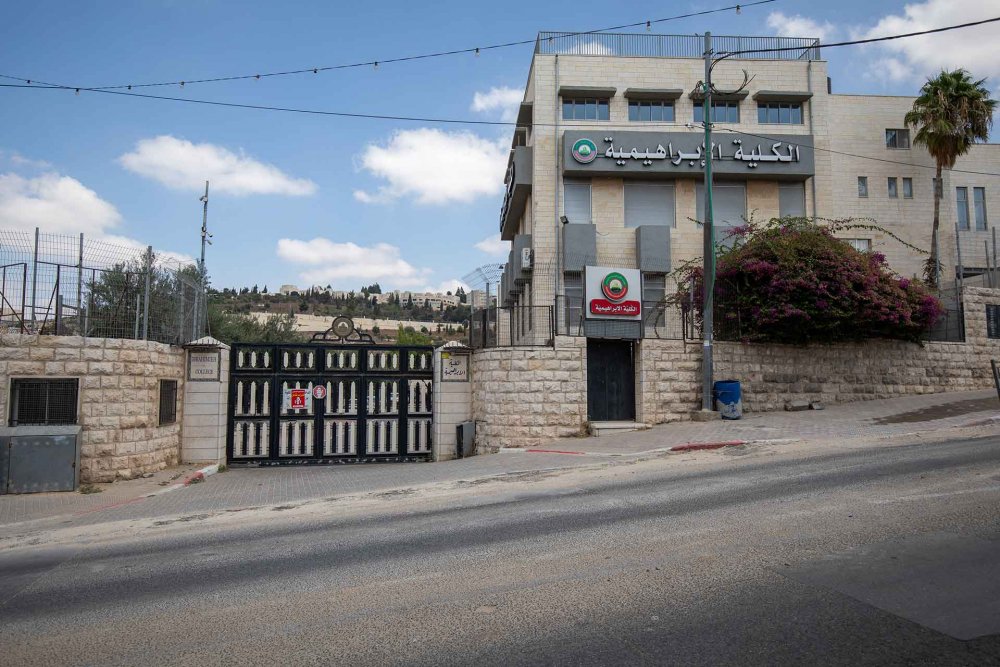 al-Ibrahimiyya College in East Jerusalem, one of six schools whose permanent licenses have been threatened and where parents are pushing back

Upon learning of the schools’ dilemma, the parents of students at al-Ibrahimiyya school held a public meeting to assert that they will not allow their children to be taught using this textbook with its distortions of fact.

Akash says he and other parents, mostly professionals, have been conducting a nonviolent struggle in this regard. He calls his group Hirak (movement). He says that their philosophy is clear. “We understand that schools are under tremendous pressure to toe the line with the Israeli ministry, which provides basic funding for schools.” Akash argues that the school tuition subsidy is not a gift, but it comes from the Palestinian taxes paid to the municipality and government with little return in services.

Schools including al-Eman, which the three Akash children attend, distributed to the students the Israeli-modified books and filmed the distribution of those books, but made it clear that they cannot control what students end up doing with those books. Palestinian parents then drove to Ramallah in their own cars and brought the Palestinian civics textbook for every student in grades 1 to 10. And this brought the Israeli Ministry of Education inspectors to Beit Hanina to literally open and check the students’ bags.

Akash says that the fight over the curriculum includes all books from first through tenth grades. Grades 11 and 12 are not included, because they take the Palestinian Tawjihi and therefore the Israelis allow the Palestinian-issued texts to be used.

School administrations have since decided to honor the parents’ preference and continue to teach using the Palestinian curriculum, despite the suspension of their licenses and the threat of closure.

The fight over the curriculum includes all books from first through tenth grades.

Not the First Time: Historical Precedent

What Palestinian parents in Jerusalem did in 2022 was not something new or unfamiliar. In the fall of 1967, three months after the 1967 War, when Israel tried to impose its curriculum, Palestinian parents in East Jerusalem took the same position on their children’s education and the textbooks used. In fact, the status of Arab public schools in East Jerusalem has been problematic ever since Israel occupied East Jerusalem. Virtually no country in the world has publicly accepted that occupation (which became a je jure annexation in 1980 with the passage of Basic Law: Jerusalem The Capital of Israel), and most of the world community still considers East Jerusalem to be occupied territory.

Shortly after Israel occupied the former Jordanian Jerusalem municipality and illegally expanded it and imposed its laws and jurisdiction on East Jerusalem, it tried to compel all schools to follow the Israeli curriculum. The idea did not go over well with Palestinian parents, who were worried about their children’s future. When the school year began in September 1967, few East Jerusalem students attended the city’s many public schools; instead, their parents enrolled them in private schools locally or sent them to Palestinian schools in the Ramallah and Bethlehem areas.

After two years, the Israeli government, realizing it could not impose its curriculum on the population, allowed Palestinian students to follow the Jordanian (and later, the Palestinian) curriculum leading up to the Tawjihi general secondary education certificate examination.

In addition to the public schools’ teaching based on the Jordanian, and later, Palestinian, curriculum, private secular and religious schools were popular for those who could afford the fees. Some of these are connected to specific churches and religious orders. Examples include Schmidt’s Girls College, an international German school for Christian and Muslim girls; St. George’s School (Madrasat al-Mutran), a British boys’ school run by the Anglican diocese of Jerusalem; the French Catholic boys’ school La Salle Collège des Frères; the Rosary Sisters’ Catholic high school for girls; and various other Catholic, Orthodox, Coptic, and other schools, as well as several schools operated by the Jordanian Islamic waqf.

Fast-Forward to Now: The Government Offers an Incentive—But at an Intolerable Price

Israel’s law requires that free education is guaranteed to all students, but the state of the education sector in East Jerusalem has been fairly abysmal for a long time and continues to become more so. For example, in 2021—22, there was a shortage of 3,517 classrooms, and 29 percent—nearly one-third—of Palestinian children of compulsory school age in East Jerusalem were “invisible”—that is, unaccounted for and presumably not receiving an education.1  In 2019, the high-school dropout rate among Palestinians was 26.5 percent, and Palestinian high-school dropouts accounted for 70 percent of all such dropouts throughout the city.2

In May 2018, the Israeli government announced Government Decision No. 3790—Narrowing Socioeconomic Gaps and Promoting Economic Development in East Jerusalem—a five-year investment plan. One of the six areas included in this plan was education and higher education; this area was allotted the second highest budget in the plan of up to NIS 445 million over five years. But receipt of funding by schools was “explicitly conditioned on the use of the Israeli curriculum.”3

On July 28, 2022, the Israeli education minister, Yifat Shasha-Biton, sent letters to six Palestinian private schools in East Jerusalem that use the Palestinian curriculum revoking the permanent operating licenses. Israeli education officials used Twitter to explain the reasons for insisting on the Israeli revised books. They claimed that the Palestinian curriculum contained “dangerous incitement” against the Israeli government and army. (Among the things Israel considers to be incitement are any references to its rule as an occupying power or to support for Palestinian prisoners and martyrs.) The six were the Ibrahimiyya College and five schools run by the al-Eman schools organization. They were given a conditional one-year license to change the curriculum or face permanent closure, most likely by the beginning of next school year in the fall of 2023.

At the time, Sheikh Jamil Hamami, executive director of al-Eman schools, told the media, “The Israeli decision is a major challenge for our schools. It infringes on the Palestinian curricula, which has been approved and taught for years. . . . The Jerusalemite people, since they are under occupation, have the right, according to international laws, to study in their schools a content that is aligned with their culture, their city and their civilization . . . This decision will cause great harm to these schools.”4

Why are Palestinian schools in East Jerusalem going on strike and protesting? We spoke with a lifelong Jerusalem resident, parent, and community activist to find out.

“The Jerusalemite people, since they are under occupation, have the right, according to international laws, to study in their schools a content that is aligned with their culture, their city and their civilization.”

The Palestinian news agency WAFA reported that on October 26, 2022, staff of the Israeli Ministry of Education, guarded by the police, literally stopped young Palestinian children who attend al-Eman primary school and al-Ibrahimiyya school in the Palestinian neighborhood of Beit Hanina and compelled them to open their school bags and undergo an intrusive search for Palestinian textbooks.5 The children were left terrified.

The unprecedented act resulted in a school sit-in protest against the forced inspections. 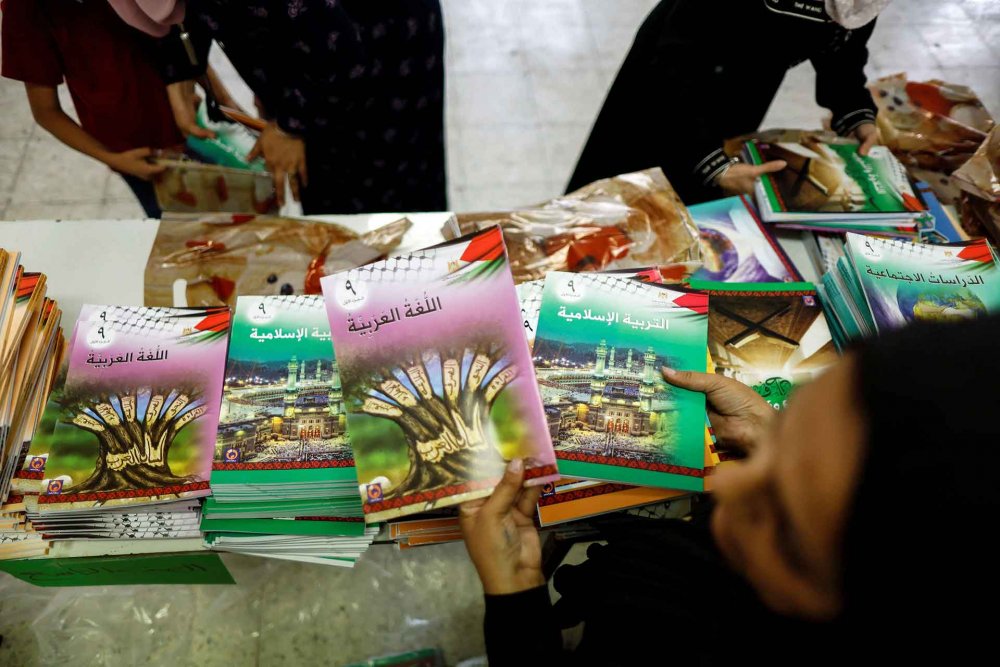 Parents distribute textbooks to schoolchildren as part of a protest in Shufat refugee camp in East Jerusalem, October 1, 2022

An Orphaned Population Is Stuck in Political Limbo

The Arab educational system in East Jerusalem reflects the dichotomous position of Palestinian Jerusalemites. After the Oslo Accords, hundreds of thousands of Arab Palestinians in Jerusalem find themselves political orphans. Israel required them to take the status of permanent residents, meaning they are not allowed to vote in national elections (see Precarious Status). Only a small percentage have opted to apply for Israeli citizenship, a path fraught with its own obstacles and often denied. On the other hand, Israeli law also bans the Palestinian National Authority in Ramallah from acting on their behalf in any respect whatsoever. Consequently, Palestinian Jerusalemites have no effective national leadership that can represent their interests. In the case of education, it is the students who pay the price.

Palestinian parents like Ishaq are very concerned about the kind of education their children receive. They categorically reject Israeli efforts to erase the Palestinian narrative and replace it with a sanitized view of Israel, one which is diametrically opposed to the realities that their children live and breathe daily. In all likelihood, Israeli authorities will find themselves next fall in the position of closing schools over the objections of angry parents and despite state law that guarantees education to children. 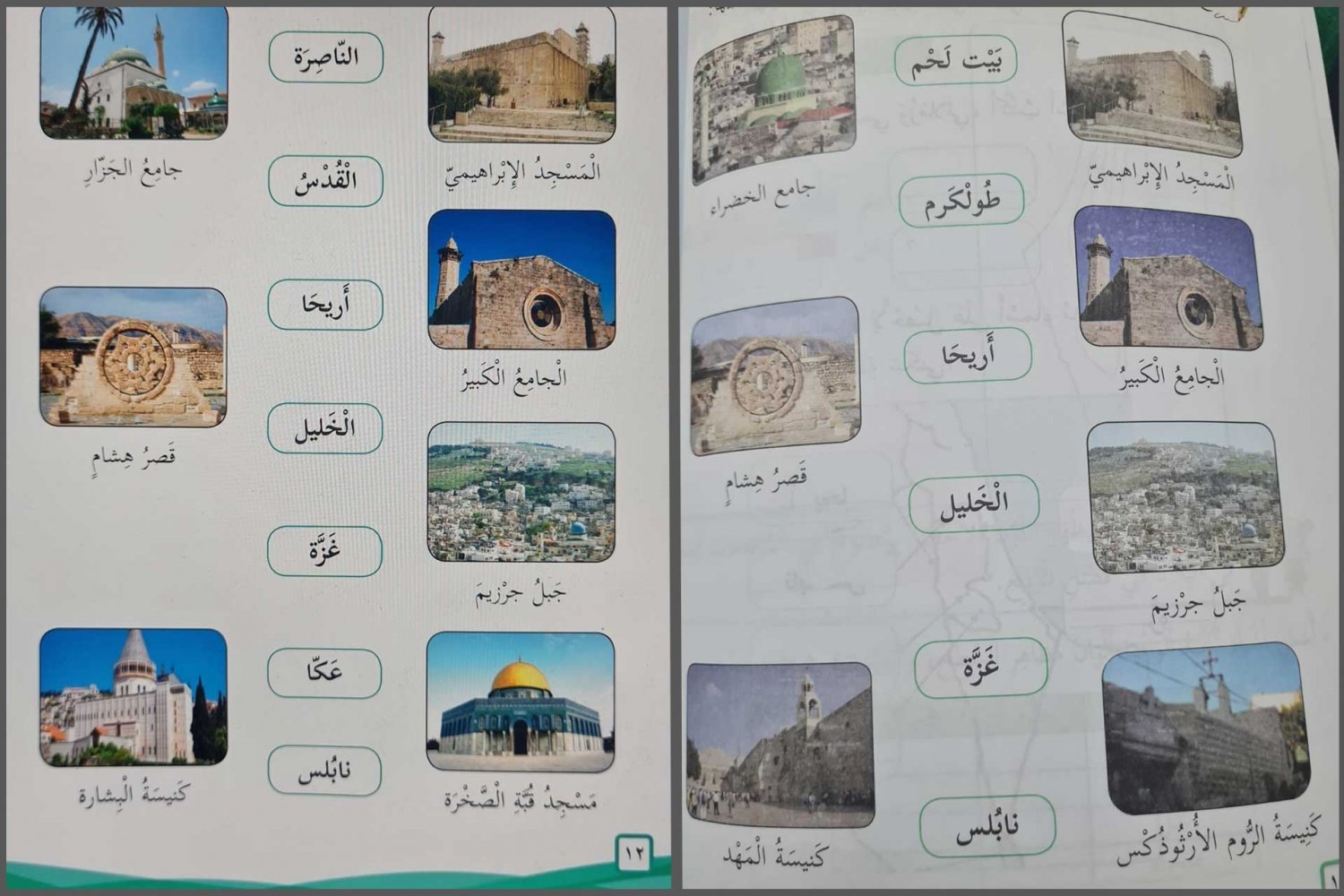 A sample page from a school textbook, before and after alteration. The page is about cities that have holy sites. In the Palestinian version, seven cities are identified as having holy sites: Nazareth, Akka, Jerusalem, Jericho, Hebron, Gaza, and Nablus. In the Israeli-altered version, only six cities are identified as having holy sites: Bethlehem, Tulkarm, Jericho, Hebron Gaza, and Nablus. Nazareth, Akka, and (most absurdly) Jerusalem are omitted, although the text is being used for students learning in the holy city Jerusalem with its abundance of sites holy to various religions.

Provided by the author 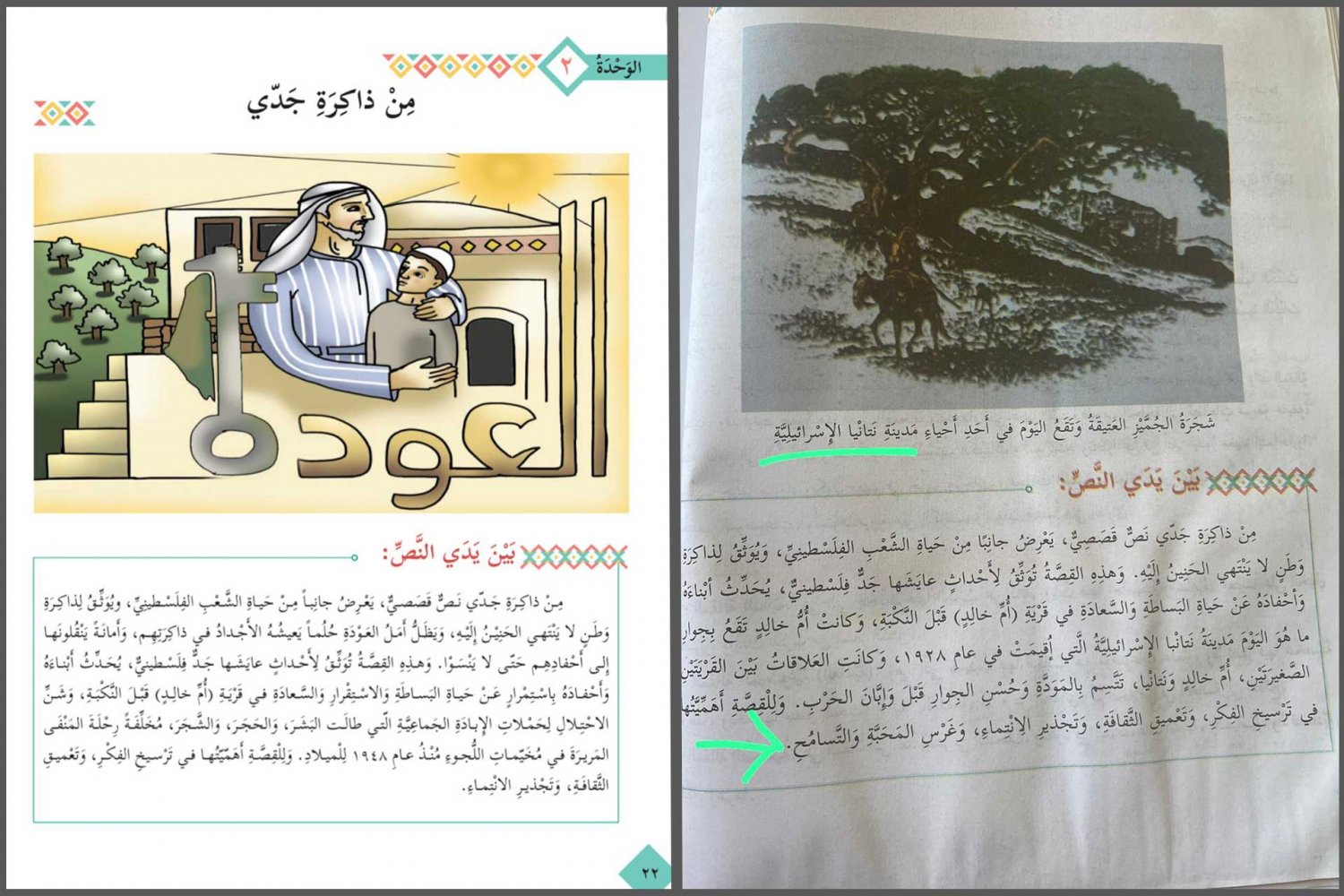 A sample page from a school textbook, before and after alteration. The page is about a grandfather’s memories. In the original Palestinian textbook, the memories are about the Nakba, and an image of a key is shown symbolizing return. In the Israeli-altered version, the grandfather’s memories concern coexistence in Netanya, a Jewish city in Israel.

Provided by the author

“The State of Education in East Jerusalem: Failing Infrastructure,” Ir Amim, August 2019, 5. According to these Ir Amim reports, the municipality stopped providing data for grade 12 after 2019.

Daoud Kuttab is an award-winning Palestinian journalist, media activist, He is a former Ferris Professor of Journalism at Princeton University and is currently director-general of Community Media Network, a not-for-profit organization dedicated to advancing independent media in the Arab region, as well as a columnist for Palestine Pulse at al-Monitor, Born in Jerusalem, he began his journalism career working in the Palestinian print media (al-Fajr, al-Quds, and a-Sennara) as well as in the audiovisual field (documentary producer). He established and presided over the Jerusalem Film Institute in the 1990s. In 1995, he helped establish the Arabic Media Internet Network (AMIN) a censorship-free Arab website www.amin.org. He established and has headed from 1996 to 2007 the Institute of Modern Media at al-Quds University in Jerusalem. He is a ralso egular columnist for the Jordan Times, the Jerusalem Post, and the Daily Star in Lebanon.

Award-winning Palestinian filmmaker and producer Ihab Jadallah revisits his favorite childhood place as part of our series on Jerusalemites’ favorite places in the city.

Music educator and puppeteer Yacoub Abu Arafeh uses creative education to serve society and confront challenges, including those facing his own neighborhood, targeted for forcible expulsions.