Al-Bustan Association Silwan was first conceived in 2012 by a group of young volunteers who wanted to create a safe space for the neighborhood’s residents, especially the youth. The entire neighborhood of al-Bustan in Silwan, a densely populated Palestinian neighborhood of 1,500 just beyond the southern wall of the Old City of Jerusalem, has long been threatened with mass demolition by the municipality, which together with the settler organization El’ad plans to install

a renewed biblical realm in the visual basin of the Old City, with the physical manifestation of a Jewish Biblical past, genuine or recreated, embedded in the landscape. This is to be achieved not only by means of settlements, but by a series of parks, excavations and attractions, linked by trails, guaranteeing that the visual elements in the historic basin of the Old City will evoke memories of ancient Biblical Jerusalem.1

Al-Bustan neighborhood forms a wedge that sits smack in the middle of this grandiose vision. 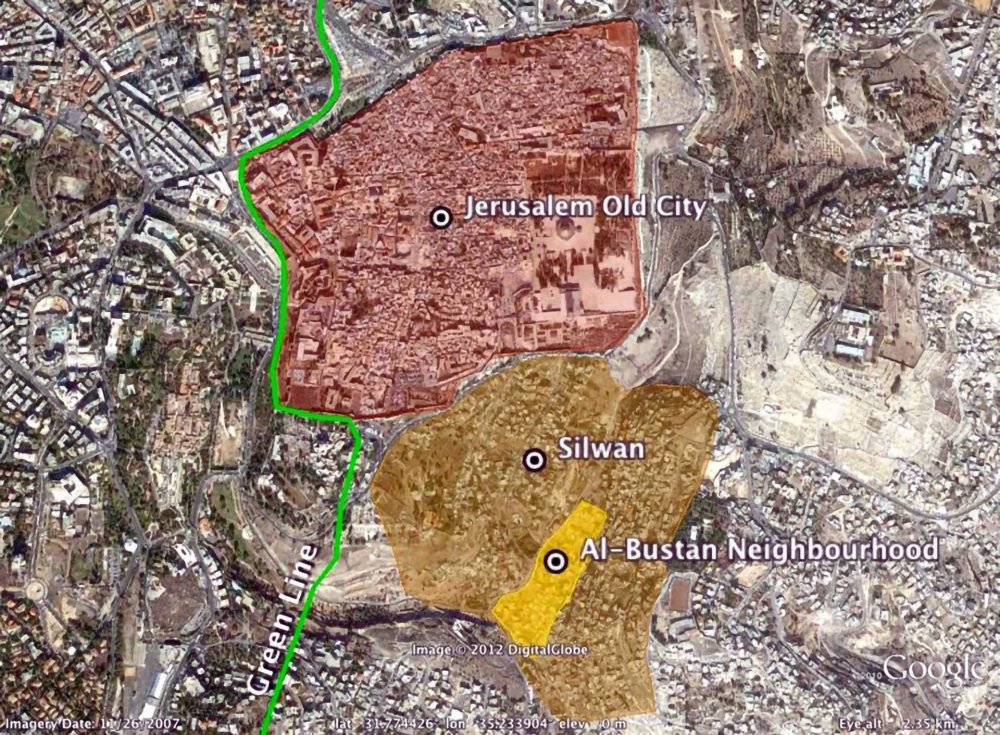 The al-Bustan neighborhood of Silwan, where 90 percent of the homes are slated for demolition

“Of the 13 neighborhoods in Silwan, six of them have demolition or eviction orders,” observes Amani Odeh, 35, the current head of al-Bustan Association Silwan. In al-Bustan, the situation is particularly dire—there are 86 outstanding demolition orders that would ultimately remove 1,300 households or residential units—so many that 90 percent of the neighborhood is at risk.2 Although the residents have tried every avenue of legal appeal, the reality is that these orders could be implemented any time. Meanwhile, the community lives in a state of perpetual fear and anxiety.

The desirability of the neighborhood to settlers and their successive infiltrations through home takeovers and archaeological projects mean that tensions run high and confrontations are frequent. Police particularly target children and youth for intimidation and arrest, whether for stone-throwing, Molotov cocktails, social media posts, or just for the sake of instilling fear. An article in the Washington Report on Middle East Affairs in 2016 featuring Sahar Abbasi Baidon, deputy director of the Madaa Creative Center in Silwan, reported:

“Of the 13 neighborhoods in Silwan, six of them have demolition or eviction orders.”

“The majority targeted for arrests are children between the ages of 7 and 17,” [Baidon] said. “Army soldiers, police officers, undercover intelligence and special forces are all involved.” Often arrested at home during the [middle of the] night, no family member can even talk to the child. According to Israeli law, children should not be handcuffed, blindfolded or interrogated without parental representation, Baidon pointed out, but Palestinian children are. During interrogation they are subjected to physical, psychological and verbal abuse and humiliation. Baidon described the experience of one young child who, when he asked to use the bathroom, was told by his Israeli interrogators: “you can just pee in your pants.”

Many children subsequently experience bedwetting, nightmares, anxiety, sleep disorders, weight loss and behavior problems by either withdrawing or being aggressive. Sadly, their academic performance suffers, and many children prefer to just drop out of school.3

Blog Post Book Review: Determined to Stay—A Deep Dive into the Nightmare That Is Childhood in Silwan

Amani, a dentist, has two children—Muhammad Adam, 12, and Silwan, 8. Her neighborhood means a lot to her; she is rooted here. Her father, Sheikh Musa Odeh, has been arrested on several occasions for protesting the Israeli municipality’s unjust treatment of Silwan’s residents.4 He became a member of the committee in defense of al-Bustan neighborhood. All of Amani’s siblings were arrested several times as children. Her youngest brother, Musallam, was arrested 33 times before he reached age 11.

It Started as an Aspiration

When al-Bustan Association was first conceived in Silwan in 2012, the community members had already put up a tent to protest the demolition orders against their neighborhood. To show support as well as to create a sanctuary for different segments of the community, the young group of volunteers renovated a room on the protest site and made it their center under the slogan “One day, we will be what we aspire to be.” According to al-Bustan’s website, the association

sprang out of the need to address the immediate threat of demolition and eviction orders for the entire neighborhood . . . the systematic and repetitive police and settler intimidation against children, and the lack of infrastructure services and facilities such as playgrounds, parks, as well as the deteriorating economic situation.5

In 2012, the association began as a scout troop. The al-Bustan scout troop gives members a sense of community, discipline—all of which highlight the importance of collective empowerment in the face of mass demolition threats.

The association grew to offer various sports and cultural activities, including taekwondo, capoeira, football, basketball, gymnastics, dabkeh, painting, reading activities, and educational workshops. They have also organized field trips and summer camps towards instilling a sense of empowerment and leadership among children and youth.

The scouting movement in Palestine, which originated not long after the scouts movement itself originated in the 1880s in Scotland, began in the final years of the Ottoman Empire before World War I and was most active in Nablus.6 In 1912, the first troop “based on the English model” was formed in Jerusalem at St. George Missionary School.7 The scout movement in Palestine gained prominence throughout the years, and Silwan’s youth were tapping into a long-standing institution that could help sustain a community under attack.

In 2014, the group asked the community members what activities they wished to be organized. To their surprise, the young people all wanted a scout band, and it was in this way that al-Bustan Association was actually launched in 2014.

Scout band leader Hamoudeh Awadallah, 29, recalls the joy he had once the idea of the band came to life. He was 19 when he joined it. “I have always been fascinated with the drums,” he shared in an interview on August 19, 2022.

The Scout Band and Other Performances at the Summer Program Finale

At the beginning, the band organizers had several obstacles. They did not know how to start training; they really knew nothing about scout marches, Awadallah acknowledges. The association sought help from the (Christian) Arab Orthodox Union Club Scout Group in Jerusalem, a voluntary, global, nonpolitical youth movement founded in 1942, which is known locally for its scout marches, performances, and skills.

“We hardly had any tools or instruments when we first started,” Awadallah recalls. It has been difficult to gather funds for the instruments, but they managed to get basic gear and drums through the support of some organizations and contributions from the children’s families. “We still have a lack of resources,” Awadallah admits, but he believes they have come a long way. He was especially excited after they started to have their own formal band uniform.

The al-Bustan Association scout band is now locally known for marching on important occasions, including religious celebrations and national events. It has also performed at concerts locally and internationally. In June 2022, the band marched in a grand carnival in France, where Palestinian children from Silwan marched in Paris to the sounds of the Palestinian national anthem amidst tens of thousands of French spectators.8

“This was part of the cultural and sports exchanges with our French partners,” shared Qutaiba Odeh, former head of al-Bustan Association Silwan. “Our band proved itself successful in all such events at the broader and international scales, and it reflects the great potential that the children and youth of Jerusalem have when they are given the opportunity to shine.”

In June 2022, the band participated at a grand carnival in France. 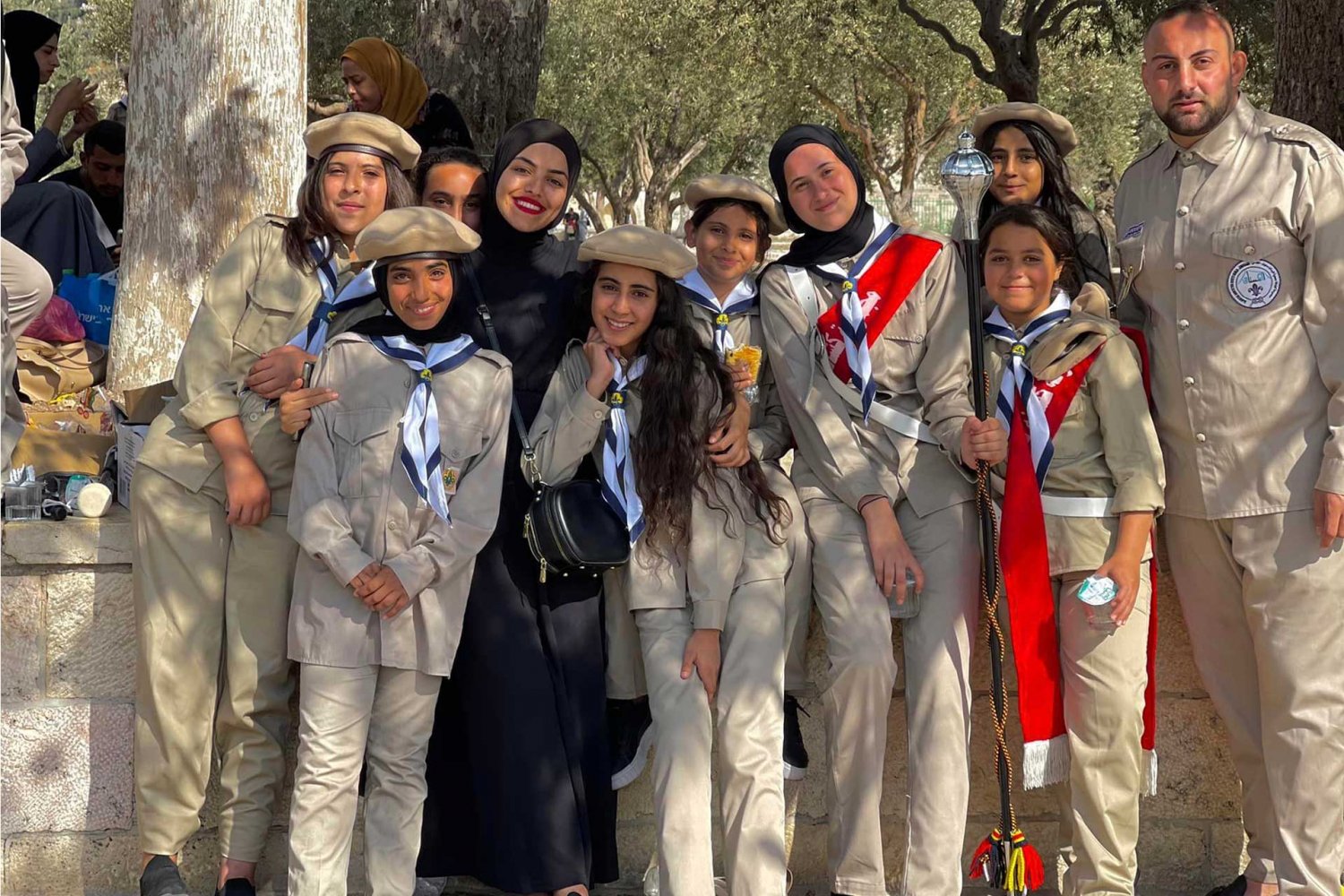 A senior member, Muhammad Yousef Jaber (76), shares how much joy he gets from being part of the group. He is a retired nurse from Makassed Hospital and is now a scout leader. “I really appreciate the level of respect, integrity, and ethics that we have as scout members,” Awadallah adds.

“I really appreciate the level of respect, integrity, and ethics
that we have as scout members.”

Despite the politicized nature of Silwan, “The scout movement is not political,” Awadallah stresses in conversation. He describes Silwan as a marginalized area that has several problems in addition to eviction, including violence and drugs. As a scout leader who was involved with the association since its early days, he believes it has instilled in Silwan’s children a sense of discipline and focus. “lt gives them a sense of safety and strength when they see that they are part of a larger community,” Awadallah observes. Another benefit is cultural: “Being part of the scout band has introduced us to various Palestinian folkloric songs.”

Al-Bustan Association Silwan has turned into a significant youth hub that provides space for the children and youth to breathe. As the organizers highlight, it became a safe space in the midst of threat, constant clashes, and overall state of panic in the area.

“The scout movement is not political.”

“The Judaization of the Eastern Part of the City: What Is Really Happening in al-Bustan Neighborhood?” POICA Eye on Palestine, September 4, 2009.

Blog Post Book Review: Determined to Stay—A Deep Dive into the Nightmare That Is Childhood in Silwan