The Sakakini House: Tracing Israel’s Bureaucracy of Collective Confiscation through One Treasured Home

Through the tale of one home, we trace the legal and bureaucratic mechanisms that Israel used to confiscate the land, property, and assets of the more than 73,000 Palestinians who were expelled from or fled Jerusalem in 1947–48 and never allowed to return.

May 1934: Khalil Sakakini, a Palestinian educator, political and social figure, and prolific diarist, buys a plot of land north of Qatamon to build a family home for himself, his wife, Sultana, their three children, Sari, Hala, Dumia, and his sister, Melia.

He purchases the property using royalties he amassed from the widespread sale of his Arabic textbook, El-Jadid. 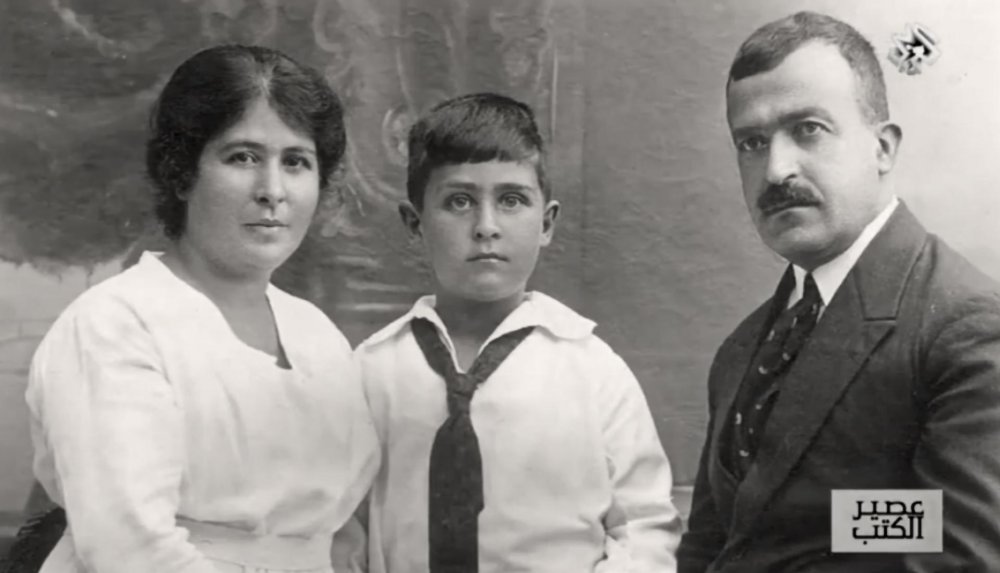 Khalil and Sultana Abo Sakakini with their son, Sari, c. 1920 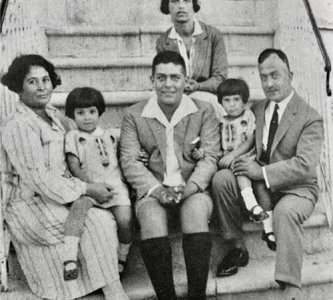 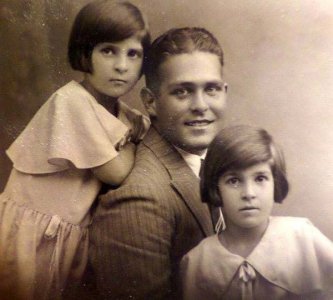 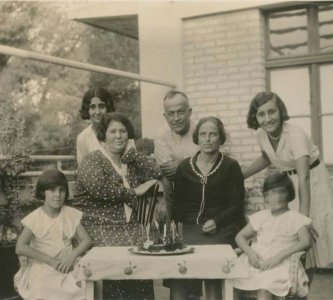 The Sakakini family, with Khalil's sister Melia (in black) who lived with them in the house

Late 1936: Construction of the house stalled as the Great Palestinian Revolt begins.

May 1937: Construction is completed. Unlike the lavish neighboring villas, the house is a simple two-story structure. The entire property, including the yard, measures 607 sq m.

When they moved in, Sakakini wrote to his son Sari, then studying abroad in the US: “The house, the house, all we talk about is the house . . . Our house is a universe, and we are all in it, eternity is our slave.”1

According to his daughter Hala, her father named the house al-Jazira (the island), and the individual rooms Damascus, Baghdad, Sanaa, Córdoba, and Cairo.

A Palestinian educator and writer who wrote an iconic, vivid narrative recounting her family’s exile from Qatamon and Jerusalem in 1948

Sultana Sakakini standing outside the home in Qatamon in the New City of Jerusalem c. 1936. The family had finished building the home  in 1937. 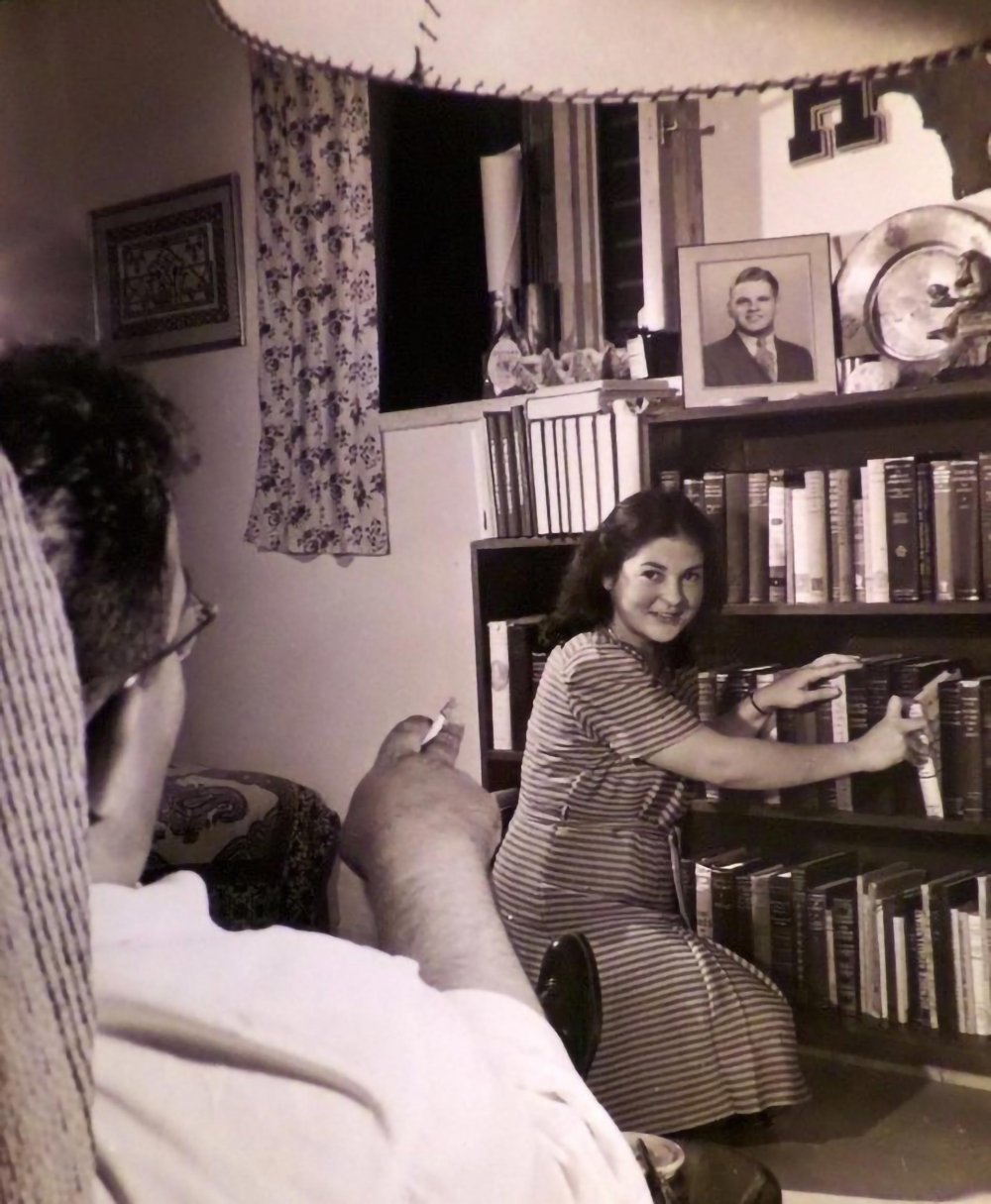 Sari and Hala Sakakini in the living room of their cherished house in Qatamon, Jerusalem

April 1948: Zionist forces invade Qatamon. After three days and 150 Arabs dead, the neighborhood falls. All surviving residents flee. The Sakakinis leave their home on April 30 and head for Cairo by car. They are one of the last families to leave the Jerusalem neighborhood.

May 1948: The new State of Israel is declared, leading to the exile of over 750,000 Palestinians. This number includes over 73,000 Palestinian Arabs from Jerusalem and nearby villages (see The West Side Story).2

June 1948: Israel passes Abandoned Property and then Abandoned Areas Ordinances which defined as “abandoned” “any area or place conquered by or surrendered to [Israeli] armed forces or deserted by all or part of its inhabitants, and which has been declared by order to be an ‘abandoned area.’ All properties in these areas are also declared ‘abandoned’ and the Government is authorised to issue instructions as to the disposition of such properties.”3

October 1948: Israel passes the Emergency Regulations Regarding the Cultivation of Fallow Lands and Unexploited Water Sources, which give the Minister of Agriculture the power to retroactively authorize the seizure and reallocation of lands that had already been seized and reallocated.4

December 1948: Israel passes a law granting the office of the Custodian of Absentee Property legal status and authority to define all Arabs displaced during the war as “absentees,” regardless of whether or not they returned. This term applied to hundreds of thousands of Palestinian Arabs, including the Sakakinis, thereby allowing the Israeli government to expropriate their properties, rendering them state property.5

1949: Israel establishes Amidar, a state-owned public housing company, funded largely by the Jewish Agency for Israel, the Jewish National Fund, and the Israeli government. Amidar is tasked with providing subsidized and rent-controlled housing, primarily for lower-income Jewish families. To offer housing for the large number of Jews moving in, many homes in Qatamon are divided, including the Sakakinis’. Amidar managed the division of the Sakakini home and thereafter.

April 1949: The Langer family, likely Jewish evacuees from the emptied Jewish Quarter in the Old City, rents the second floor of the Sakakini home.

By April 1949, the home was divided and the second floor was rented to the Langer family.

1953: Israel passes the Land Acquisition (Validation of Acts and Compensation) Law in March 1953, enabling the selling of all properties under the Custodian of Absentee Property office to the Development Authority. The law applied to “immovable property that 1) was not in its owner’s possession on 1 April 1952; 2) had been used for essential development, settlement and security between 14 May 1948 and 1 April 1952; 3) was still needed for these purposes.”7 The Finance Ministry bought and nationalized about 1.2 million dunams through this law.

April 1955: On the second floor of the Sakakini house, the Langer family is replaced by the Bergers.

July 1967: Hala and Dumia Sakakini, now living in Ramallah, visit what remains of their home in Qatamon. In her memoir, Hala laments that what they see “was no more home.”

1969: The Nina Cohen Atlantic Provinces Daycare Center, sponsored by Canadian-Hadassah WIZO, is established in the house. About 59 children attend in three classrooms with 19 teachers. It is still there today, at 8 Yordey Hasira St. in Katamon.

Israel uses the 1950 Absentees’ Property Law and several amendments to it to confiscate Palestinian property across East Jerusalem and give it to Jewish settlers. 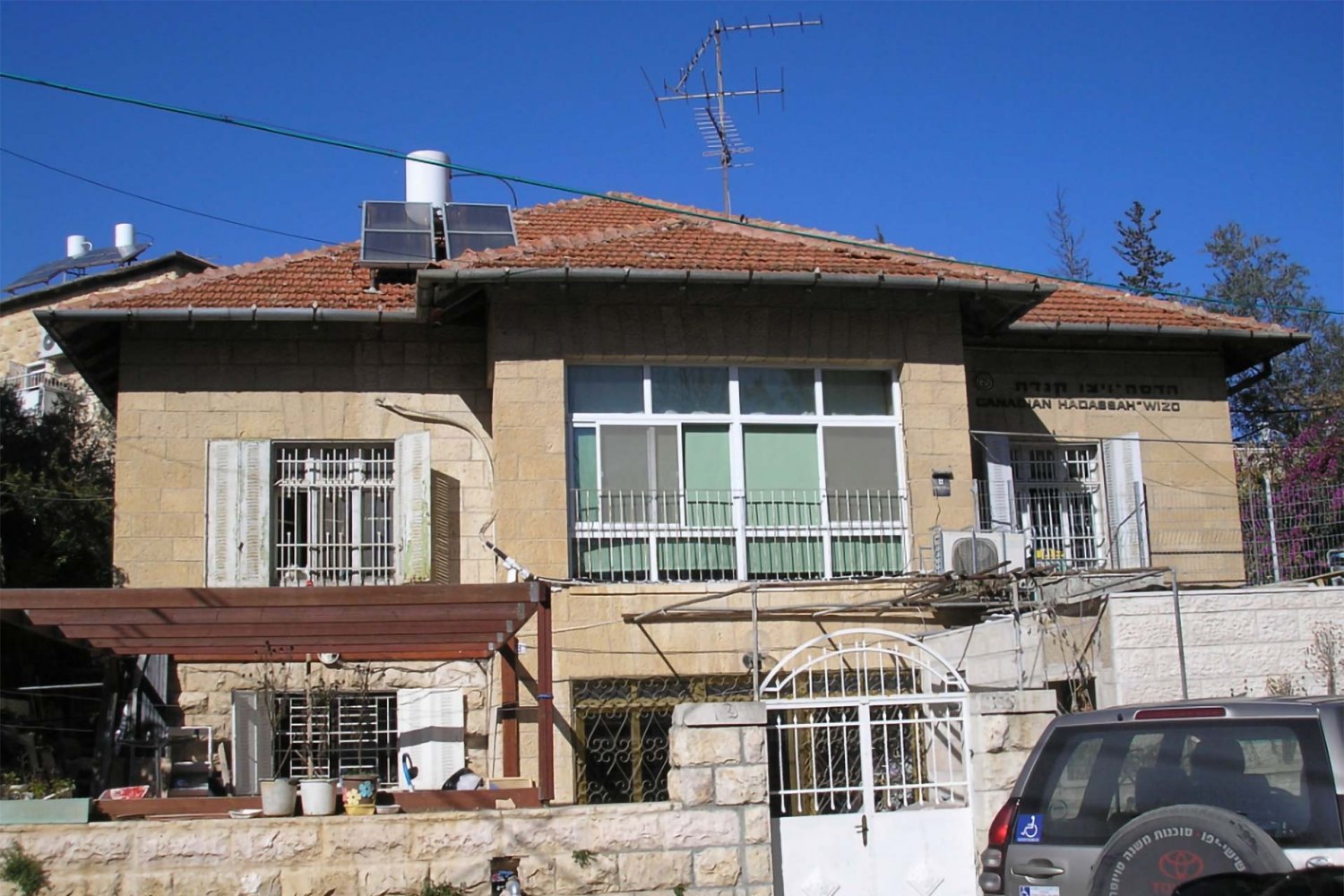 The Sakakini house in Qatamon, divided into two flats, with WIZO visible on the right

1997: Amidar offers WIZO and the Manoach family full ownership of their respective flats, which both accept.

May 2006: The Sakakini house is registered in the Israeli land registry bureau as a communal apartment building, erasing its original status as a single-family home.

Salim Tamari, “The City and Its Rural Hinterland,” in Jerusalem 1948: The Arab Neighbourhoods and Their Fate in the War, ed. Salim Tamari (Jerusalem and Bethlehem: Institute of Palestine Studies and BADIL Resource Center for Palestinian Residency and Refugee Rights, 2002), 79.

Center on Housing Rights and Evictions and BADIL Resource Center for Palestinian Residency and Refugee Rights, Ruling Palestine: A History of the Legally Sanctioned Jewish-Israeli Seizure of Land and Housing in Palestine (published by the authors, 2005), 40.

Danna Piroyansky, “From Island to Archipelago: The Sakakini House in Qatamon and Its Shifting Ownerships throughout the Twentieth Century,” Middle Eastern Studies 48, no. 6 (2012): 862.