Charged with “Security” Offenses for Reporting on a Demonstration, a Photographer Fights to Remain in Jerusalem

An Algerian-born Palestinian photojournalist whose father, wife, and daughter are legal Jerusalem residents is left stateless and in limbo as Israel repeatedly rejects his applications for status through family unification and tries unsuccessfully to deport him, claiming “security” reasons.

Status: Living without a legal status (stateless) in the city with his wife and daughter while he tries all avenues to find a way to remain with his family in his city legally

Mustafa al-Kharouf,1 34, was born in 1987 in Algeria to a Palestinian father, originally from Jerusalem, and an Algerian mother. In 1999, when Mustafa was 12, the family moved back to Jerusalem; ever since, Mustafa has lived as a temporary and stateless resident.

When the family arrived in East Jerusalem, the priority was for Mustafa’s father to prove that Jerusalem was his “center of life,” as required by Israeli law for Palestinian Jerusalemites (see Precarious, Not Permanent: The Status Held by Palestinian Jerusalemites), so that he could regain permanent-resident status. In theory, once Mustafa’s father’s status was reestablished, it would be easier for the rest of the family to gain legal residency status. However, even this first step took six years to prove.

The Israeli Ministry of Interior’s “center of life” rule is used to revoke permanent-resident status from those who are outside the country for a certain length of time. By the time Mustafa’s father resolved his status and was able to apply for the rest of the family to get their own through family unification, Mustafa and his older sister were already over the age of 18 and could not be included in the application. Instead, they were each granted an Israeli tourist visa on “humanitarian grounds,” which was renewed periodically.2

Mustafa and his sister continued living in Jerusalem, going about their daily lives as best they could. Mustafa’s sister later married a Jerusalem permanent resident and was able to secure her residency through her husband by way of family unification.

Mustafa, a photographer, began working as a photojournalist for Anadolu, a Turkish news agency. In 2015, he got engaged to Tamam, a permanent resident of Jerusalem, and they planned to obtain permanent-resident status for Mustafa through family unification after they got married.

Life was relatively peaceful for Mustafa as he made plans and worked to gain legal status in his hometown. But trouble was brewing. At the end of 2015, he learned that his tourist visa renewal application was being considered for rejection because of pictures posted on Facebook showing him at a local Palestinian protest. Israeli security officials claimed he was involved in a riot and had assaulted a police officer, which he vehemently denied. He told Haaretz in March 2019:

It was during a period of demonstrations in Jerusalem, and what do newspapers and news agencies in the world want? Pictures of the demonstrations. I can’t be a construction worker. I’m not built for it. I wanted to study at Bezalel [Academy of Arts and Design in Jerusalem], but I couldn’t afford the tuition. I studied photography on the Internet and learned through experience.3

Shortly after this accusation surfaced, the assault claim was dropped, because the police admitted that Mustafa was telling the truth.4

However, in June 2016, Mustafa learned that his visa would not be renewed. At this point, the Israeli human rights organization HaMoked: Center for the Defence of the Individual became involved in the case and appealed the decision with a Ministry of Interior committee.

HaMoked lawyers explained in the appeal that Mustafa worked as a photojournalist and that as part of his job, he photographed demonstrations. At a hearing in May 2017, Mustafa’s lawyers and the committee agreed that he would apply for residency through family unification. (He was by then married to Tamam.)

Despite this agreement, Mustafa received a letter from the Ministry of Interior on August 28, 2018, stating that his application had been denied; no reason was given.5 HaMoked appealed the decision with the Ministry of Interior in December 2018 and learned that the ministry was claiming that Mustafa was a Hamas activist, which he categorically denied.

By the beginning of 2019 and after 20 years in Jerusalem, Mustafa’s residency status was more precarious than ever, with the threat of deportation looming over his head.6 But by then, his case directly impacted two other people, his wife and toddler, and their lives were also tied intimately to Jerusalem.

In January, HaMoked initiated yet another appeal with the Ministry of Interior’s visa tribunal on Mustafa’s behalf. The Israeli authorities responded by going to Mustafa’s home in the Wadi al-Joz neighborhood of East Jerusalem on January 22, 2019, and arresting him for living “illegally” in the country. They demanded he bring his Jordanian travel document.7

Tamam al-Kharouf later told Haaretz that one of the arresting officers told her to pack a big suitcase for Mustafa, because he was going away for a long time. When she tried to talk the police officers out of arresting her husband, they threatened to arrest her, too.8

She commented on the impact that her husband’s arrest had had on their family:

Tamam al-Kharouf, wife of Mustafa al-Kharouf, speaks at his third hearing and describes the toll the authorities’ intent to deport him has taken on her, her daughter, and her extended family.

Mustafa was transferred to Givon Prison in Ramle, “where asylum seekers facing deportation are usually held.” The arrest came only one day after he had appealed the decision to deny his application for legal status.9

A hearing was subsequently held in February with a magistrate at the Ministry of Interior who was given confidential information from the Israel Security Agency (also called Shabak or Shin Bet) regarding the allegation that Mustafa was a Hamas member. The magistrate denied the appeal, because he claimed that the interior minister has been given broad discretion by the government to deny residency permits when it concerned a so-called threat to the state.10

Interviewed by Anadolou Agency at the time of Mustafa’s third hearing at the Israeli Central Court of Jerusalem on March 31, 2019, his lawyer, Adi Lustigman of the Israeli human rights organization HaMoked, said,

Avi Lustigman of HaMoked, the lawyer for Jerusalemite photographer Mustafa al-Kharouf, expresses her views on the case at his third hearing, which took place at the Jerusalem District Court, March 31, 2019.

“We see a straight-line connection between his work as a journalist to the fact that he annoyed the Israeli authorities and to the current situation where he is under bars.”

Later, in an interview with Al Jazeera in June 2019, Lustigman was even more direct: “We see a straight-line connection between his work as a journalist to the fact that he annoyed the Israeli authorities and to the current situation where he is under bars, and we think it is illegal to keep him under arrest.”11

For months, the Israeli authorities attempted to deport Mustafa to Jordan, but given that he had no status in the country, the Jordanians refused to accept him. Finally, on July 21 and 22, 2019, the Israelis attempted to deport Mustafa from multiple border crossings. First, they tried to deport him via the Allenby Bridge. When this failed, they drove him to the Wadi Araba crossing in Eilat in the southern tip of the country; that attempt, too, was unsuccessful. Deportation would mean permanent separation from his wife and child, as they have no status in Jordan.

Describing his conditions in jail by phone in March, Mustafa said:

It’s a jail where you’re only meant to be held for a few days—not weeks or months. . . . It’s for people without documents, not criminals, so the conditions should have been better than a prison for [criminal] offenders. There are foreign nationals [here] who had been previously arrested on petty offenses, and they say the prison for criminal offenders is more humane.

Everyone here is a foreigner. I have no one to speak Arabic to. We are in our rooms every day for 21 hours, and go out twice [a day] to a small yard. We were 16 people to a room and now it’s nine. People come and go. They hadn’t given me books for nearly a month. Two days ago, they gave me four books. But when I’m in a room for 14 hours straight, I finish a book in two days. I talk a bit to the other people and then get back to reading. In the initial weeks, I managed. Now I know I’m beginning to get stressed, to freak out.12

Finally in October 2019, he was released from prison through a court order. In a statement issued by HaMoked just before his release, Mustafa said:

For nine months I’ve been in prison. My baby girl has grown up without me. My wife has had to cope on her own. And why? Just because they refuse to recognize me as a Jerusalemite Palestinian. Jerusalem is the only home I have in the world. I’m so happy to finally be going home to my family, but I know my ordeal is not over yet, because they still refuse to let me live legally in my home.13 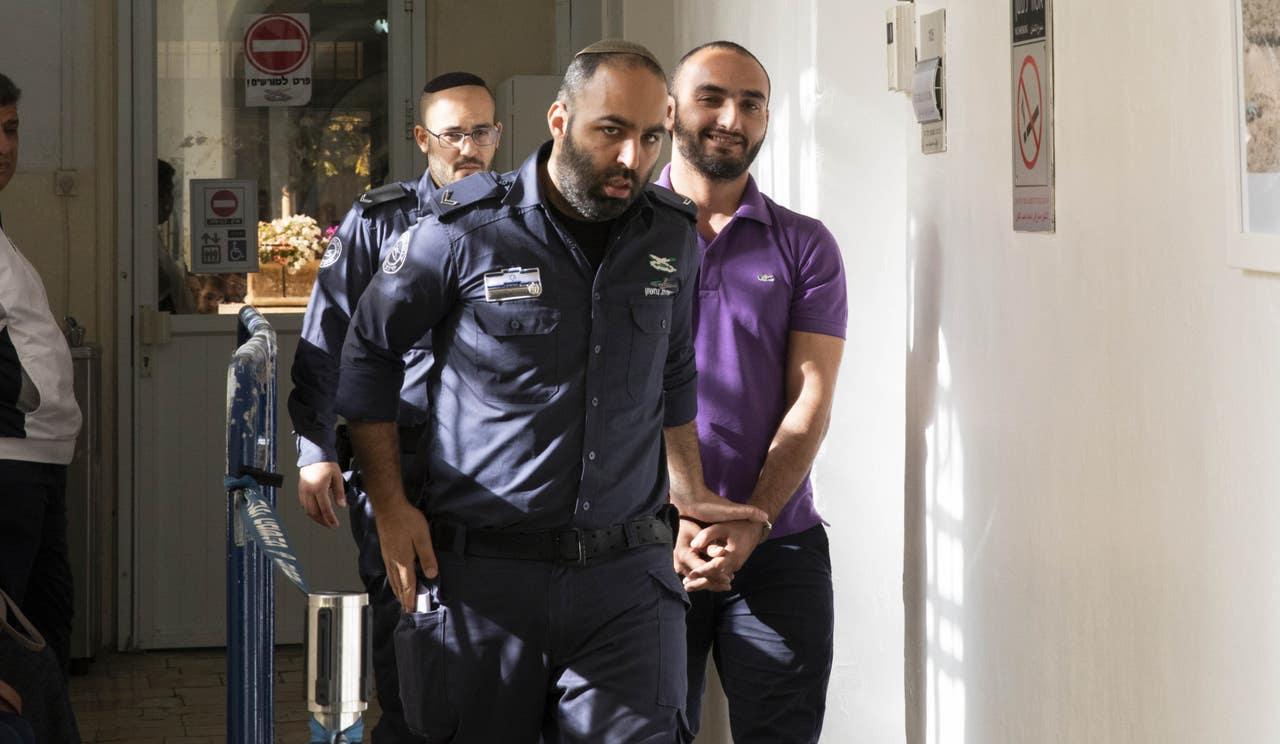 Mustafa al-Kharouf, right, in the Jerusalem Magistrate’s Court in 2017

“Jerusalem is the only home I have in the world.”

East Jerusalem is part of the occupied Palestinian Territories (oPT), whose indigenous Palestinian population should have protection under the 1949 Fourth Geneva Convention. Therefore, under the convention’s rules, Israel cannot forcibly transfer or deport Palestinian Jerusalemites. In a statement, the United Nations Special Rapporteur on the situation of human rights in the oPT, Michael Lynk, said:

The effort by Israeli authorities to deport Mr. al-Kharouf to Jordan, where he has never lived and does not have any legal residency rights, raises serious concerns under both international humanitarian law and international human rights law. Forcible transfer is considered a grave breach of the Geneva Convention, and is defined as a war crime and a crime against humanity by the Rome Statute.14

Mustafa has suffered as a result of not having permanent-resident status in Jerusalem since 1999, and the battle for obtaining residency continues to have an emotional toll on him and his family. As of this writing, he lives in Jerusalem without any status, unable to move far from his house, and awaits a response to his legal appeal. 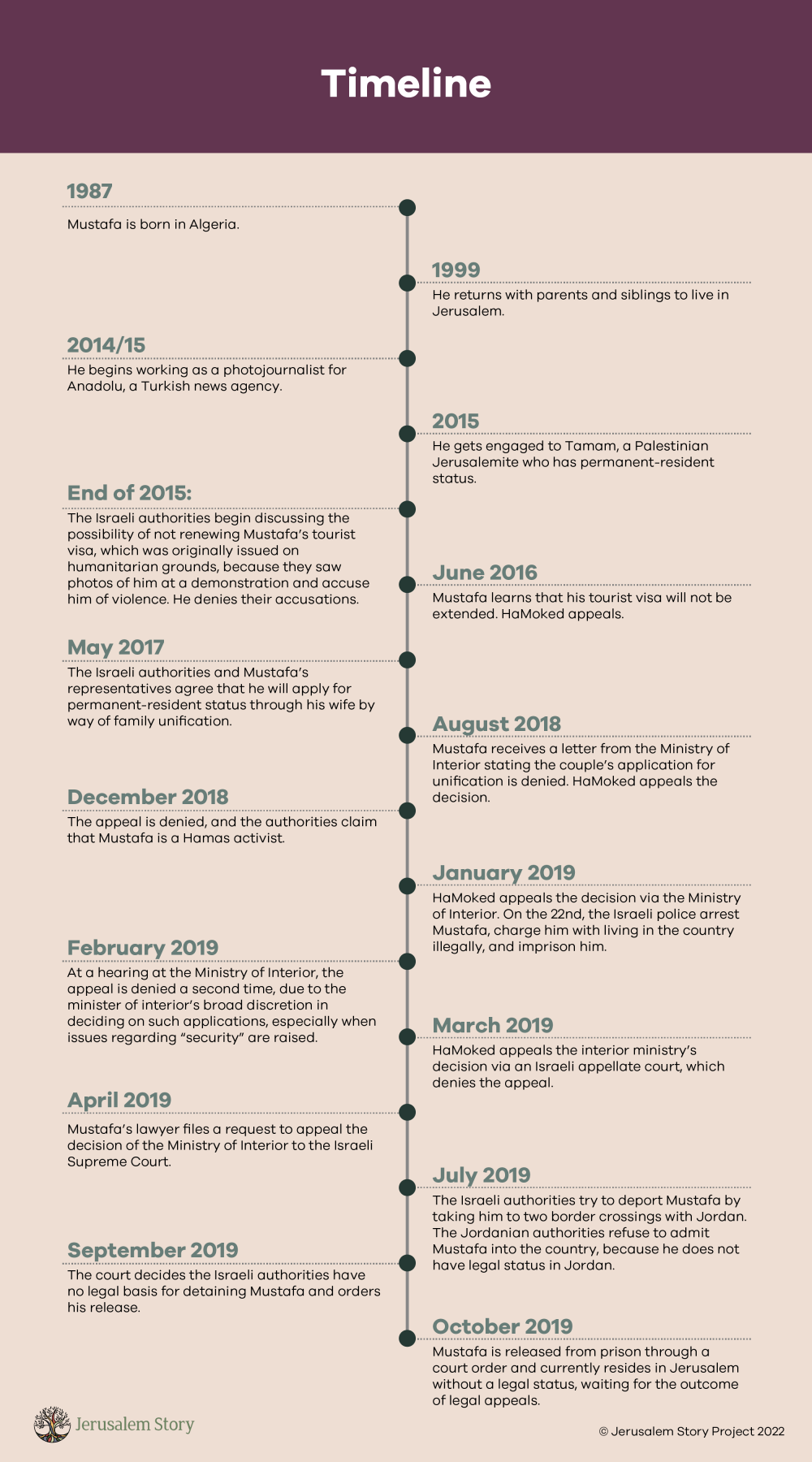 Research for this story was completed in summer 2020.

Individuals who hold this visa are not allowed to work in the country.

The Entry into Israel Law gives the minister of interior full discretion in such decisions and there is no requirement to provide a reason for a denial.

Many Palestinians in Jerusalem do not have citizenship in Israel or elsewhere and are therefore stateless (see Precarious, Not Permanent: The Status Held by Palestinian Jerusalemites). Many have a Jordanian travel document instead, and although it doesn’t give them the right to reside or claim Jordanian citizenship, it allows them short stays in Jordan and facilitates international travel.

Load More Load Less
Case Study Deported for Not “Showing Loyalty”: The Case of Four Jerusalem Officials Whose Residency Was Revoked after a 12-Year Legal Battle

An in-depth look at the extraordinarily precarious legal status held by Palestinian Jerusalemites, and how it has become more precarious over time