Ma‘moul and Ka‘ek: The Anticipated Rewards after Fasting during Holidays

Ma‘moul and ka‘ek, two buttery pastries made with semolina flour, walnuts, and dates, have been an integral part of holiday celebrations for generations. These delicious desserts are enjoyed with loved ones and guests during Easter. Muslims, too, associate them with Eid al-Fitr, the holiday marking the end of Ramadan. In Jerusalem, the rituals of preparing them persist to this day. In some homes, the pastries’ preparation calls for the whole family to take part in an all-day baking bonanza.

The Rewards after Fasting

Anyone who has tried the scrumptious shortbread pastries will most likely prefer one to the other. Ma‘moul is round or doughnut-shaped and stuffed with date paste; ka‘ek is domed and stuffed with chopped walnuts. Occasionally, some might fill them with pistachios, almonds, or figs, but the serious ma‘moul afficionado would dismiss any alterations of the “original” recipe. Not surprisingly, what is considered the “correct” recipe is often subject to heated debate.

The presumption of those who master the art of baking and displaying the perfect set of correctly decorated and powdered sugar-dusted ma‘moul and ka‘ek is warranted. After all, preparing big batches of these labor-intensive pastries is not for the faint-hearted. It takes special skill and patience to dust the mold with semolina flour and then manage to line up the dough, stretch it, stuff it, shape it, and decorate it (or pound it out of a mold). Yet most Jerusalem families make the effort, because the pastry is such an integral part of holiday celebration and hospitality. Often neighbors and family members help out, and it is at that point when their skills (or lack thereof) get demonstrated. 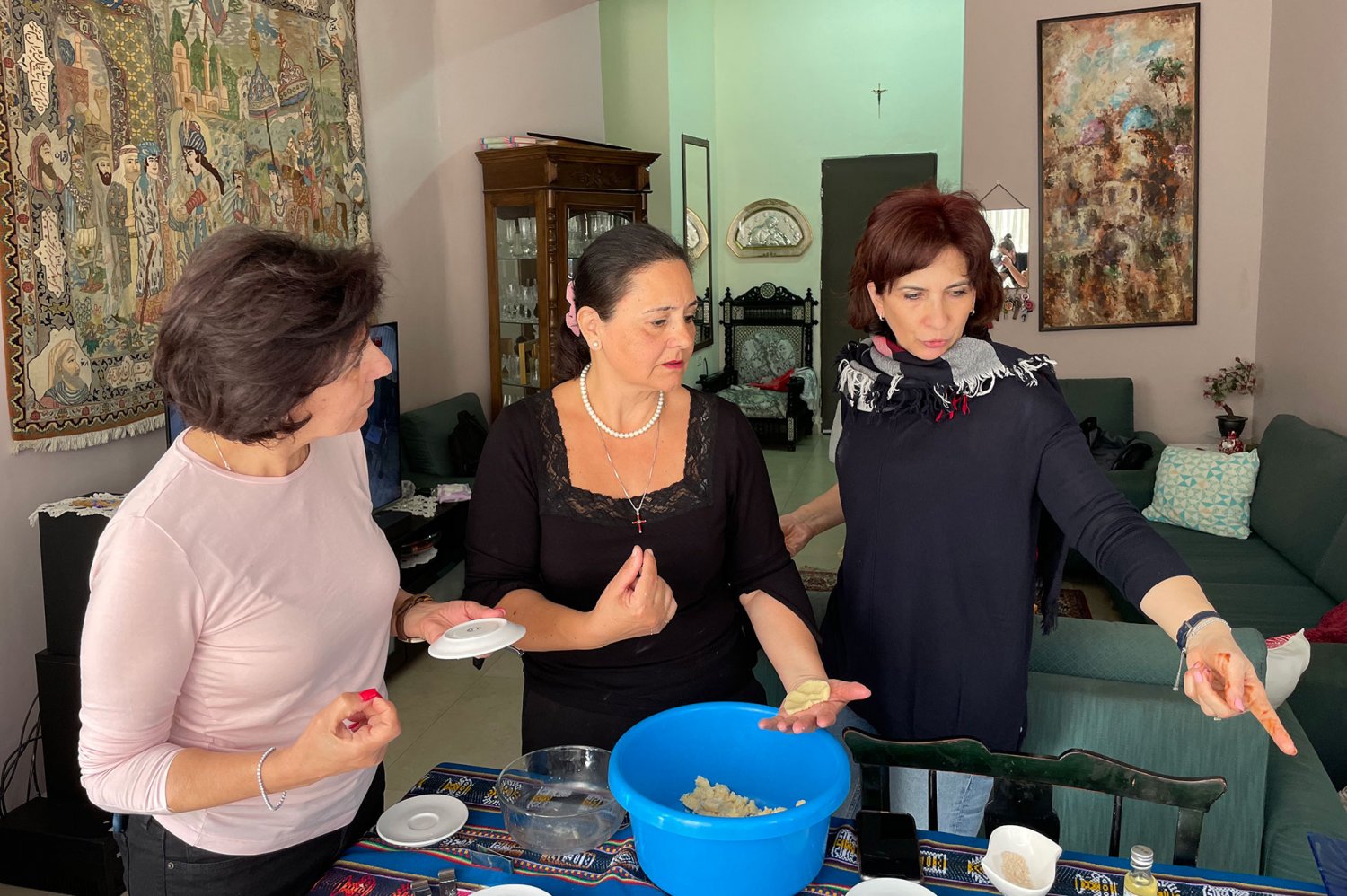 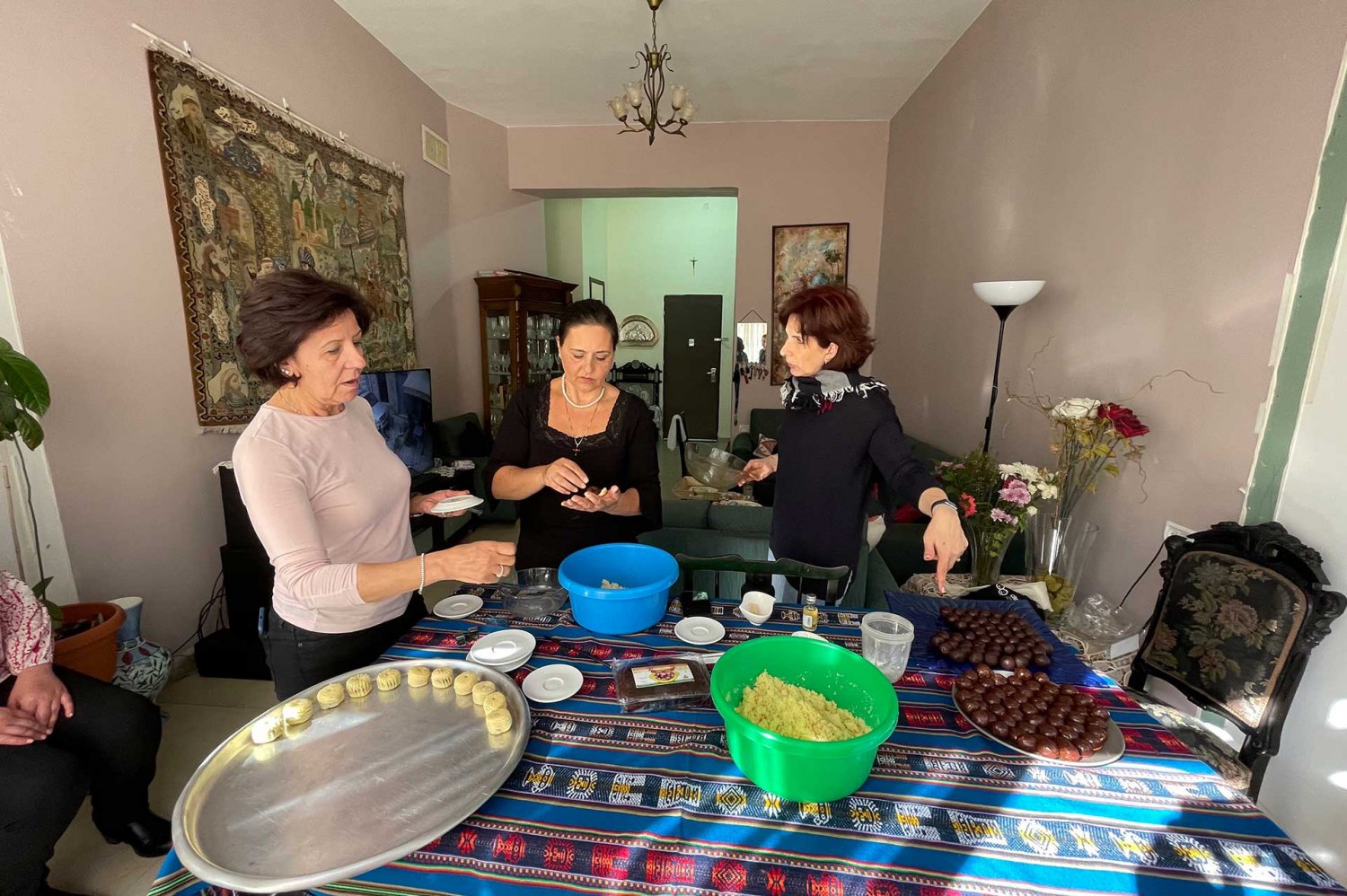 Wafa Kassicieh Turjman (center), her sister, Hania Kassicieh Persekian (left), and sister-in-law, Ilona Kassissieh (right), strategize on their plan of attack for making holiday pastries at Wafa’s house in the Old City of Jerusalem on April 21, 2022.

Preparing big batches of these labor-intensive pastries is not for the faint-hearted.

For the sake of efficiency, large quantities—and no one would think of making only one or two dozen, so quantities are invariably large—are handled in a sort of assembly line process. Some are tasked with dividing the dough and date filling into the correct amount for individual pastries. (When nut fillings are used, the filling is spooned directly into the dough.) Some work with the dough by hand, while others use coffee cups to divide the dough into uniform amounts for a single pastry; date amounts are eyeballed and then rolled by hand into elongated wormlike shapes. The dough and dates are passed along to others who assemble and shape them. The last step in the process is the decorating. Some may keep it simple, while others release their inner artist by creating their own patterns using a fork or special tweezers. Most homes have the tweezers used for this purpose. (When molds are used, this step is superfluous. Molds come in a range of designs, and the pastry is ready for baking as soon as it is pounded out of the mold.) The pastries are then placed in a tray for baking. 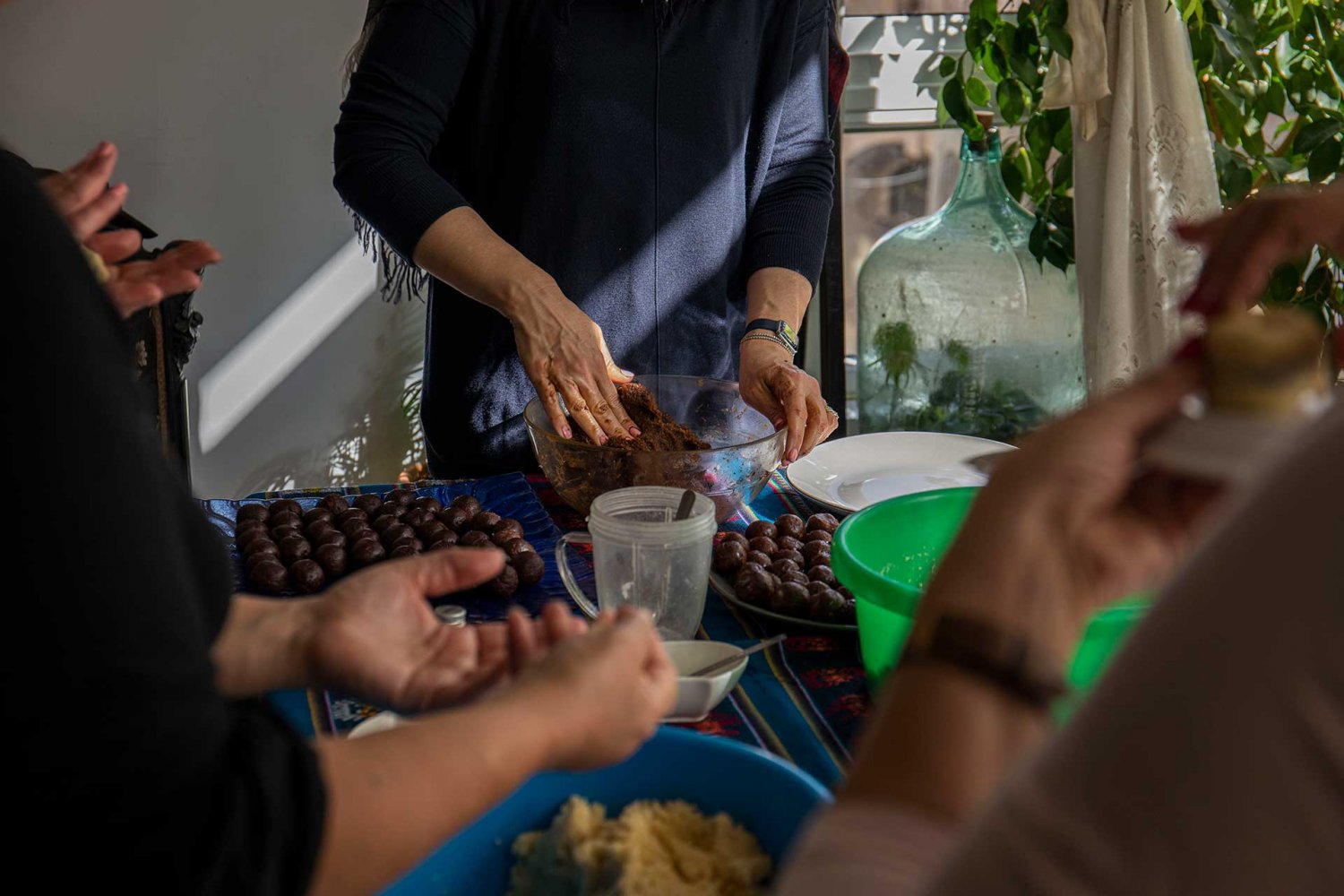 For the sake of efficiency, large quantities are handled in a sort of assembly line process, as done here by Wafa Kassicieh Turjman and her relatives at her home in the Old City of Jerusalem on April 21, 2022.

The Symbols of Crucifixion

The shapes of ma‘moul and ka‘ek are not random. The round and domed shapes go back to Christian rituals directly related to Lent, the time of fasting before Easter.

Most Christians in Jerusalem—much like those worldwide—observe Lent following Ash Wednesday to commemorate the period when Jesus is believed to have fasted prior to his crucifixion. Typically, they fast for 40 (or 50) days, depending on the denomination, and abstain from all animal products during this time. The number of days and ways in which people carry out their fasting depends on their denomination and their personal preference. 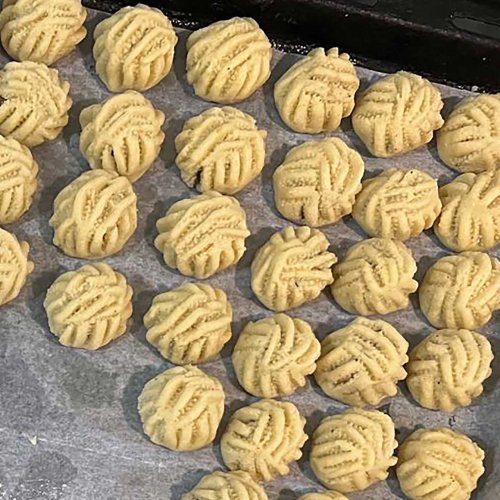 Ma‘moul pastries are domed shaped with a nut or date filling. 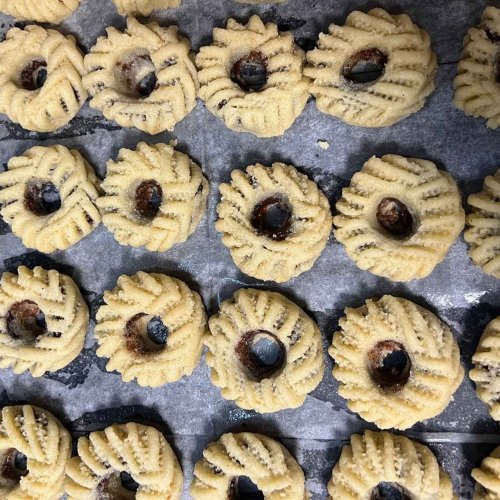 Ka‘ek pastries are traditionally circular with a date filling.

Strict observers of Lent might have only bread, salt, and water during the whole 40 days, but typically observers go on a plant-based/vegan diet. Some of those abstaining from animal products might still allow fish consumption, while others may choose to eat meat on Sundays only. Interestingly, some devotees create their own version of fasting: They may decide that building their spiritual strength is better served by fasting from temptations other than food, such as alcohol, smoking, gossip, sexual activity, TV consumption, or the use of social media.

In Jerusalem, many Christians are easygoing about Lent and cut out meat and dairy products only on Fridays (as well as Ash Wednesday). The most pertinent day for fasting is the last Friday preceding Easter: Holy Friday. Also known as the Passion of the Christ, this is the day that commemorates the crucifixion of Jesus. On Holy Friday, believers recall the anguish of Christ, who was forced to carry a heavy wooden cross along the Via Dolorosa in the Old City of Jerusalem with a crown of thorns on his head; beaten by Roman guards along the way, they taunted him by offering him a sponge to quench his thirst, dipped not in water but rather in vinegar.

It is this day—Holy Friday—that Jerusalem Christians are reminded of when they eat ma‘moul and ka‘ek on Easter: The crown of thorns is what the round-shaped ma‘moul symbolizes, while the dome-shaped ka‘ek represents the holy sponge. Ma‘moul and ka‘ek evoke the events along the Via Dolorosa leading up to the crucifixion of Christ, incorporated into celebrations of Easter and the resurrection. 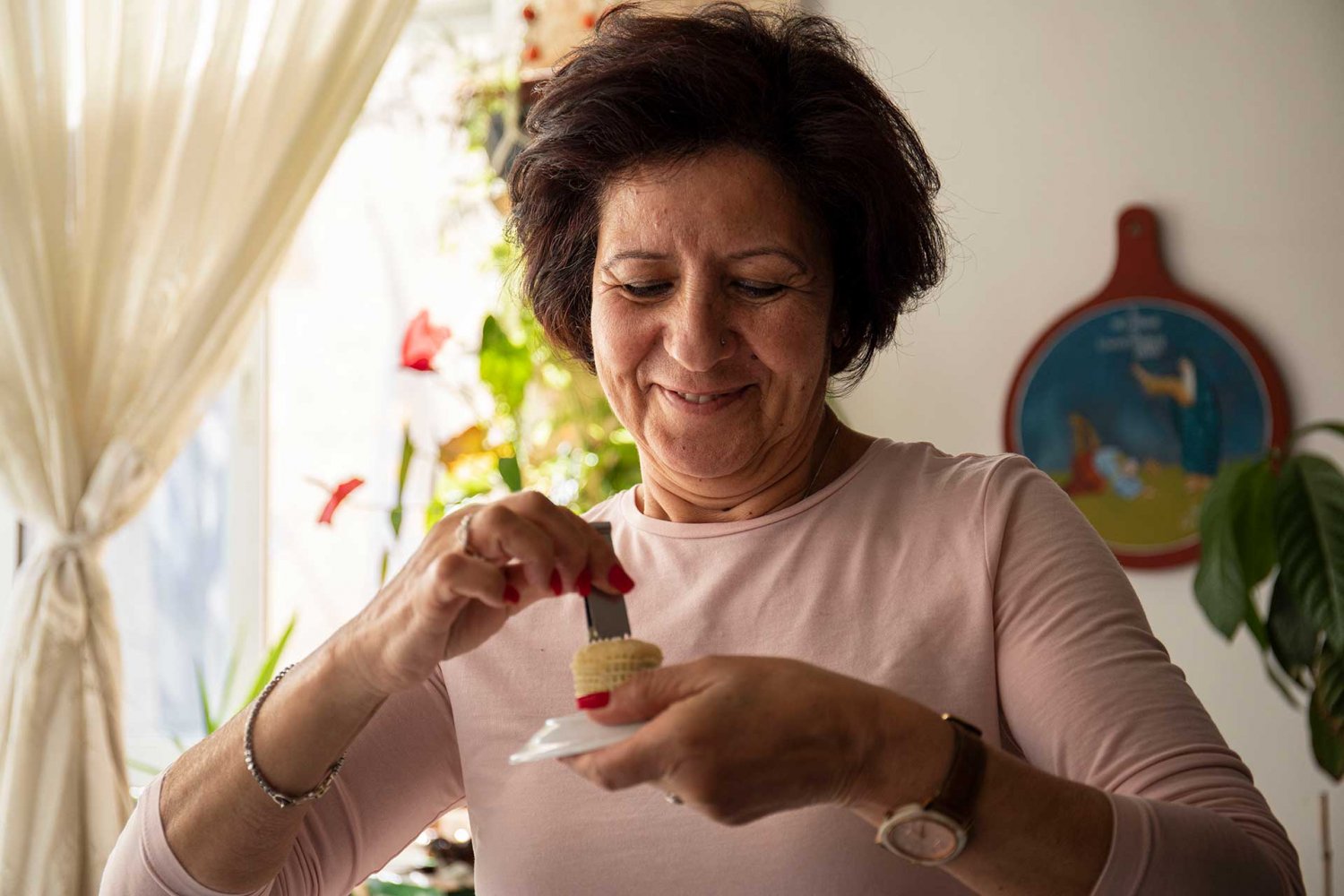 A special tool is used to create the pinpricked designs on each ma‘moul pastry, as demonstrated here by Hania Kassicieh Persekian in the Old City of Jerusalem on April 21, 2022. 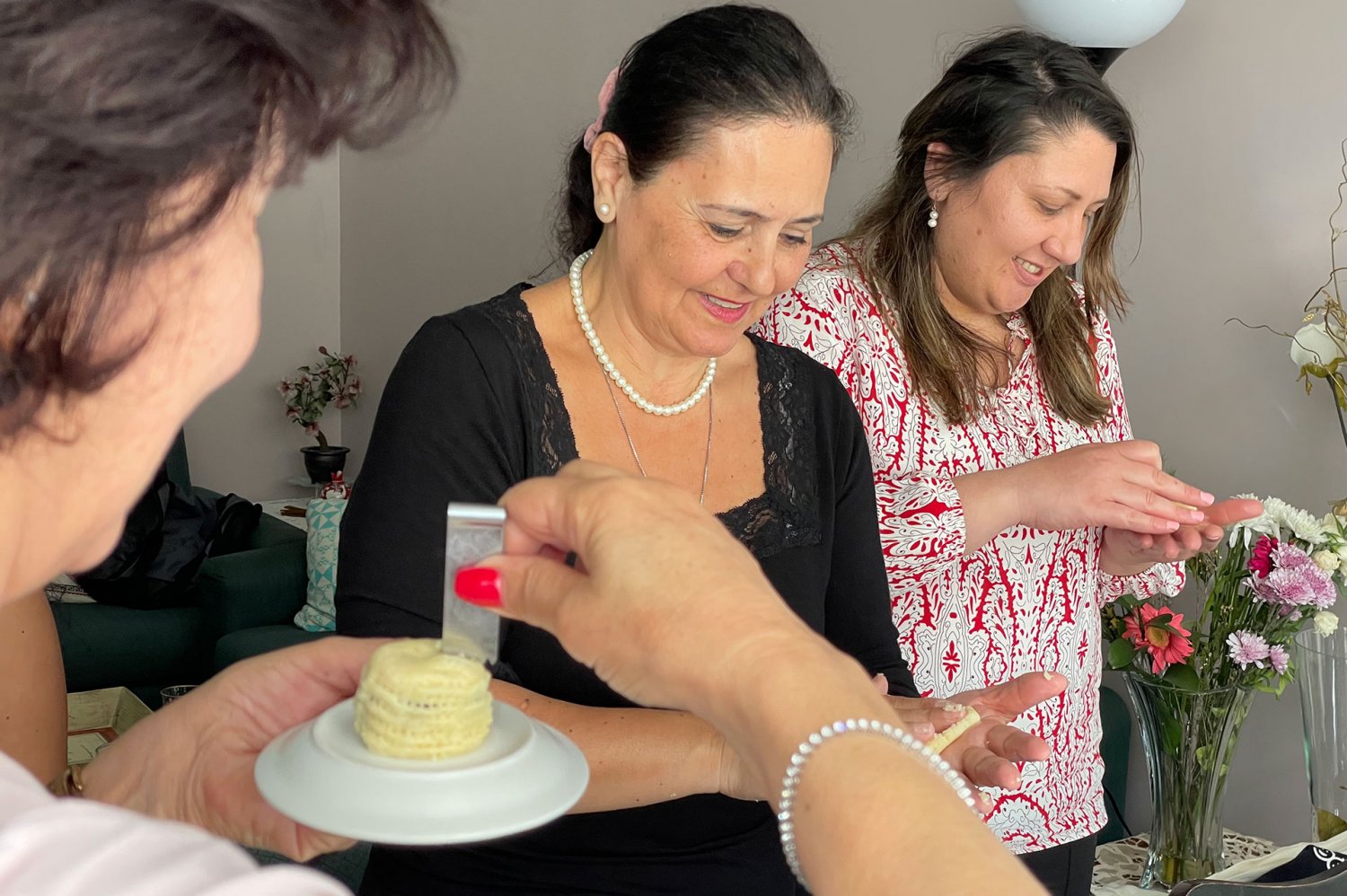 Wafa and Hania are joined by Shireen Mufdi (right), Wafa’s niece, in the pastry-making line.

Aside from their links to Christian symbolism, these pastries—as well as their method of preparation and actual ingredients—largely transcend Jerusalem. After all, this specialty is prepared in several parts of the world (including Greece, Bulgaria, Turkey, Malaysia, Sudan, Egypt, Jordan, Syria, and Lebanon) with different alterations and styles, such as adding touches of mahlab (a spice made from a type of cherry) and anise to the recipe.

Much like ma‘moul and ka‘ek have become a highly anticipated reward after the Christian Lent, so too have they made their way into the hearts of Muslim worshippers after the month of Ramadan.

The Islamic history of the ka‘ek might date back to the Tulunid dynasty (Mamluk dynasty of Turkic origin) in the ninth century. Legend has it that the minister al-Madrani used to hide gold in some of those pastries, which were distributed to the people. Later Egyptian rulers emulated this practice.

Ma‘moul and ka‘ek might even precede Christianity. They may have had roots in pagan celebrations in Egypt. The round-shaped ka‘ek may have some kind of a religious significance, as it referred to Aton, the Sun God. Interestingly, some archaeologists found images of ka‘ek engraved in walls and tombs, with implications that the pastries might have been stuffed with gold at some point in time. It is also probable that in Egypt, the ka‘ek was sometimes buried with the dead as their last meal. 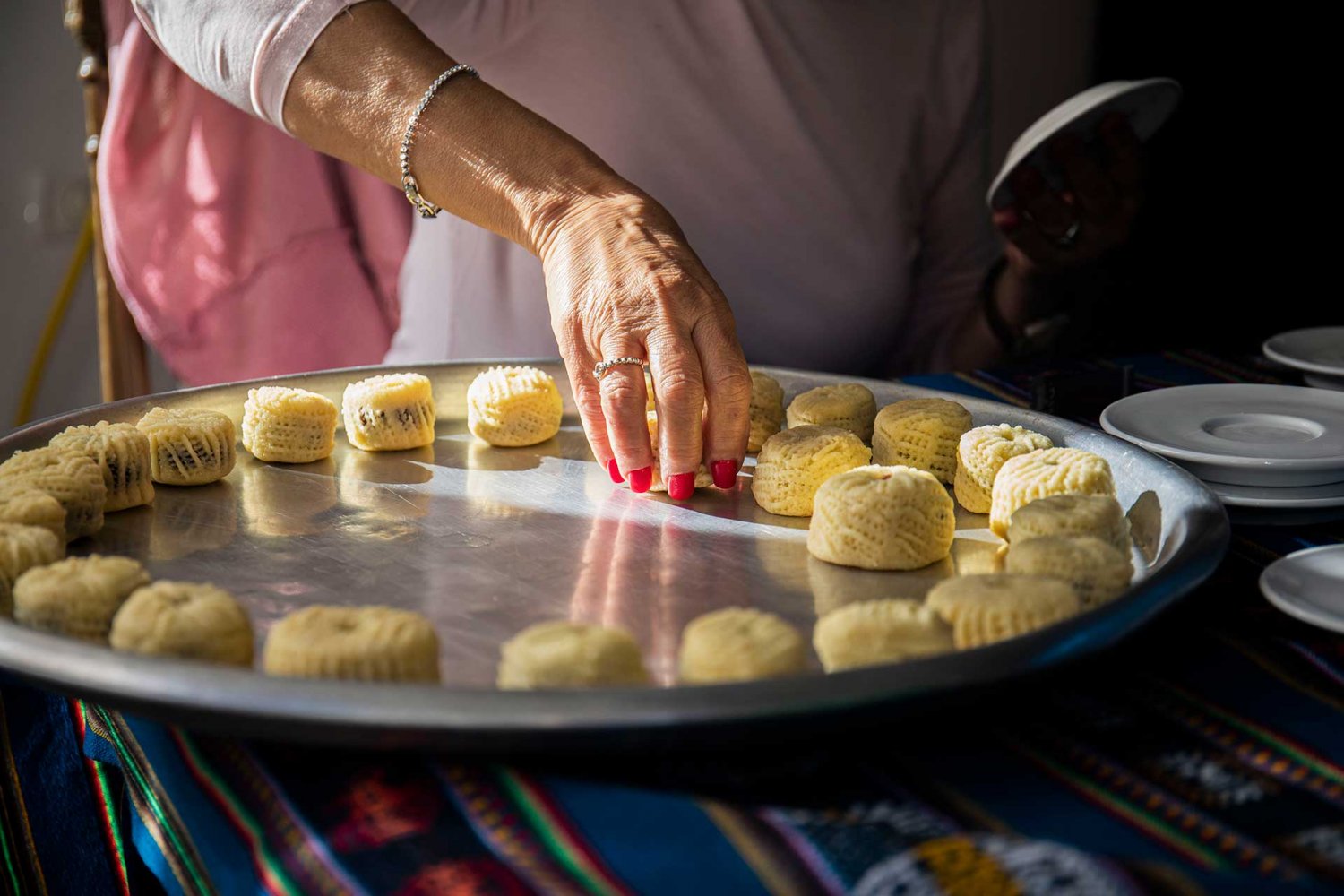 The decorated ma‘moul pastries are laid out on a tray in preparation for baking. 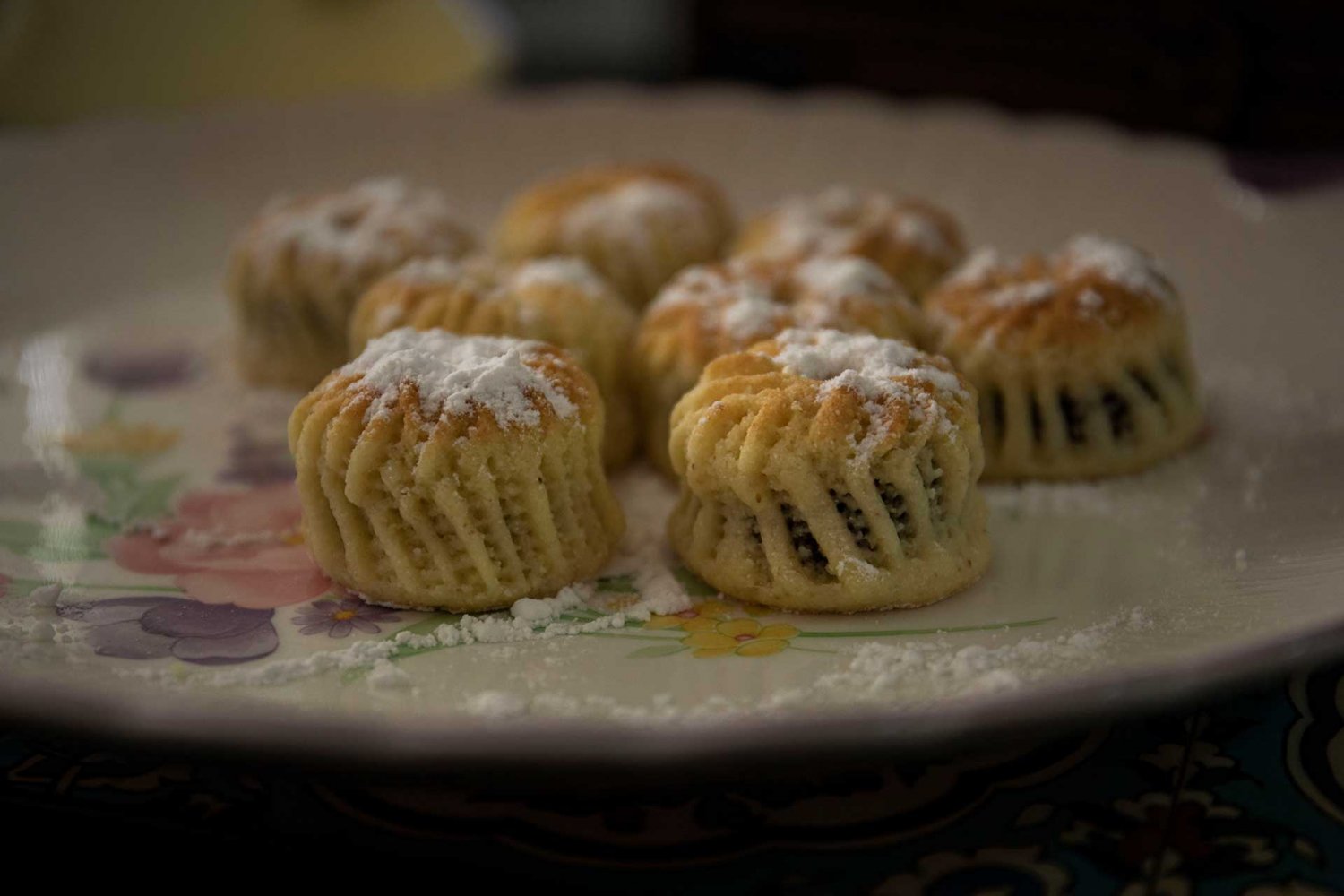 After baking, the delectable ma‘moul pastries are dusted with powdered sugar and ready to enjoy.

In essence, the significance of ma‘moul and ka‘ek in Jerusalem is most directly connected to the spirit of Easter: It serves as a reminder that after pain and suffering comes the joy of resurrection. These pastries reward those who abstained from food to grow spiritually, build tenacity, and become more compassionate during Easter Lent or Ramadan. Ma‘moul and ka‘ek have thus always been connected to celebrating spiritual renewal. The Easter bunny, on the other hand, remains a different type of mystery.

Robertson, Amy E. “Maamoul: An Ancient Cookie That Ushers in Easter and Eid in the Middle East.” NPR. April 11, 2017.

Ka‘ek al-Quds is not just a special bread—it is part and parcel of the personality of the Old City of Jerusalem.

While Ramadan 2022 was marked by repeated confrontations between the community and the police, Jerusalemites still managed to celebrate their holiday in traditional ways, as these photos show.