How does one translate ka‘ek al-Quds into English? Although “Jerusalem bagel” might be accurate, that rendition could bring about much debate. Like most things in Jerusalem, the subject could easily turn political. The bagel and the ka‘ek are like . . . cousins. They may have similar roots, but each holds its own ground. Speaking about the two could bring up strong emotions.

The bagel, after all, originated in the Jewish communities of Poland. The ring-shaped bread has a dense and chewy texture, often topped with seeds of one’s choosing (such as poppy or sesame) on the outer crust. Its basic ingredients are flour, salt, water, and yeast leavening, but may also include corn syrup, eggs, milk, butter, sweetener, or honey. It is usually schmeared with cream cheese (or lox, tomato, onion, etc.). The bagel product has thrived in many businesses throughout Europe and the United States. New York in particular is home to some of the most sought-after bagel shops. 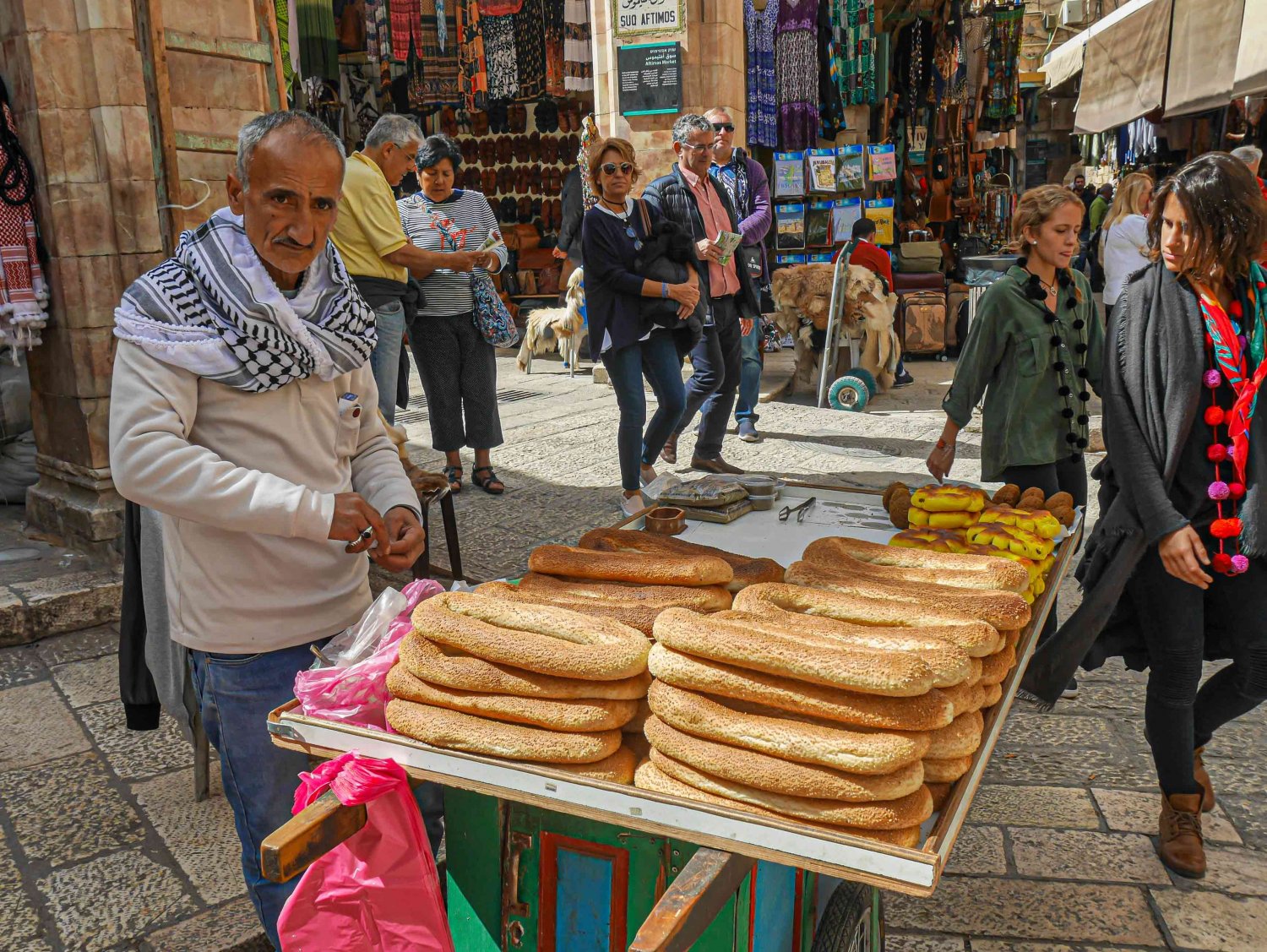 Meanwhile, the ka‘ek of East Jerusalem has a softer texture. Unlike the bagel, it is not boiled then baked, and is not cut from the middle with a knife. Instead, it is shared by hand and eaten with falafel, labneh (yogurt cheese), or hard-boiled eggs. Ka‘ek is often accompanied with newspaper-wrapped za‘tar (a traditional blend made of hyssop, sumac, and sesame seeds). Always topped with sesame, the ka‘ek’s ingredients are limited to flour, yeast, water, salt, and sugar, and it can stay fresh for days. Knowing its uniqueness, Jerusalem’s inhabitants often go long distances to present this authentic bread to those who know its value.

The skill of making ka‘ek may have been passed down from the period of Ottoman rule (1516–1917), but after the 1980s, a Palestinian bakery in the Old City of Jerusalem came up with the idea for the longer shape. The lengthier version was successful as it took less time for the dough to rise. It also changed the taste. With that, ka‘ek al-Quds became unlike any other bread.

Those who have acquired a taste for ka‘ek al-Quds will attest to the fact that it cannot be mastered elsewhere.

Those who have acquired a taste for ka‘ek al-Quds will attest to the fact that it cannot be mastered elsewhere. Only a few shops within the Old City of Jerusalem excel at making it. Despite various attempts, skillful bakers in places as close as Bethlehem and Ramallah, much less overseas, have been unable to replicate this specialty.

Many have claimed that the stones of the Old City of Jerusalem may be key to the ka‘ek’s final result. The wood-fired ovens that are over 120 years old may be a factor. Others swear that the mystifying nature of Jerusalem—its “holiness,” so to speak—is behind the secret of the special bread. Even without a logo or package noting where it was made, ka‘ek connoisseurs can always discern if the bread at hand is a “real” ka‘ek from the Old City of Jerusalem or not.

The wonder of ka‘ek al-Quds is a living nostalgia. The bakers still wake up in the wee hours of the morning to ensure that the dough will rise according to the right temperature and timing. The precious breakfast item needs to be circulated throughout the different streets and taken outside the Old City walls. The long pieces of ka‘ek are often placed on a large wooden tray and carried on the head. They are then placed on carts for sale during the day. By 11 a.m., most bakers would have closed their shops and called it a day. Meanwhile, for the inhabitants of East Jerusalem, ka‘ek has become a central part of their living memory: It epitomizes the communal brunch at home, at school, at college, at work, and in the Old City street. Irrespective of the weather conditions or the general mood, a piece of ka‘ek and a cup of tea with some fresh mint has a heartwarming effect on those who share it.

Ka‘ek connoisseurs can always discern if the bread at hand is a “real” ka‘ek from the Old City of Jerusalem.

In between the changes of time and space, this is one ritual that remains consistent for Jerusalemites. Much like the dwellers know the sun will rise, they also know the carts will carry on in the streets of Jerusalem. As such, they will continue to hear an anonymous voice of a man declaring that a new day has come as he calls out “ka‘ek, ka‘ek.” 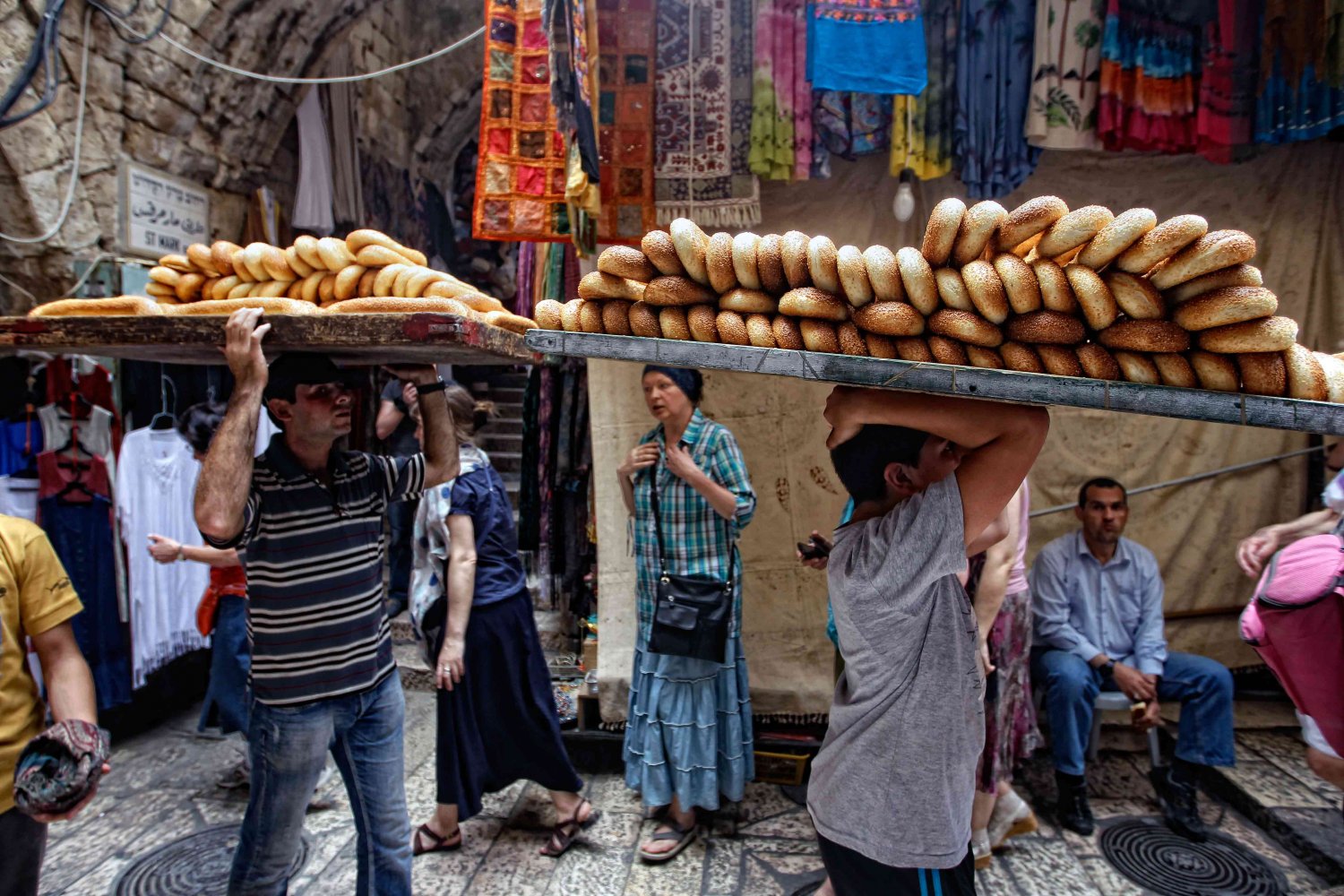 Ka‘ek sellers transport their baked goods on their heads in Jerusalem’s Old City, May 2, 2013.

Backgrounder Where Is Jerusalem? The Uncertain and Unfixed Boundaries of the City

Where is Jerusalem? The answer is a lot more complex and unclear than you might think.

Backgrounder The West Side Story, Part 1: Jerusalem before “East” and “West”