From March 25 to 29, 2021, the Jerusalem Arab Film Festival (JAFF) held the first event of its kind in cooperation with filmmakers from the Arab world. The impressive delivery of the program demonstrated the power of connecting with creative individuals from the region. It also emphasized the significance of preserving Arab culture and celebrating the achievements of cinema.

The festival successfully screened a selection of 21 diverse films from the Arab world. In addition to Palestinian films, the festival presented films from Tunisia, Morocco, Jordan, Lebanon, and Saudi Arabia.

The festival director, Nevin Shaheen, expressed in interviews with a few media outlets that the idea behind the event was to restore Jerusalem to life and release it from isolation. The aim was also to extend bridges between Jerusalem and the Arab world “by interacting with Arab filmmakers and introducing their films to the Jerusalemite audience.” 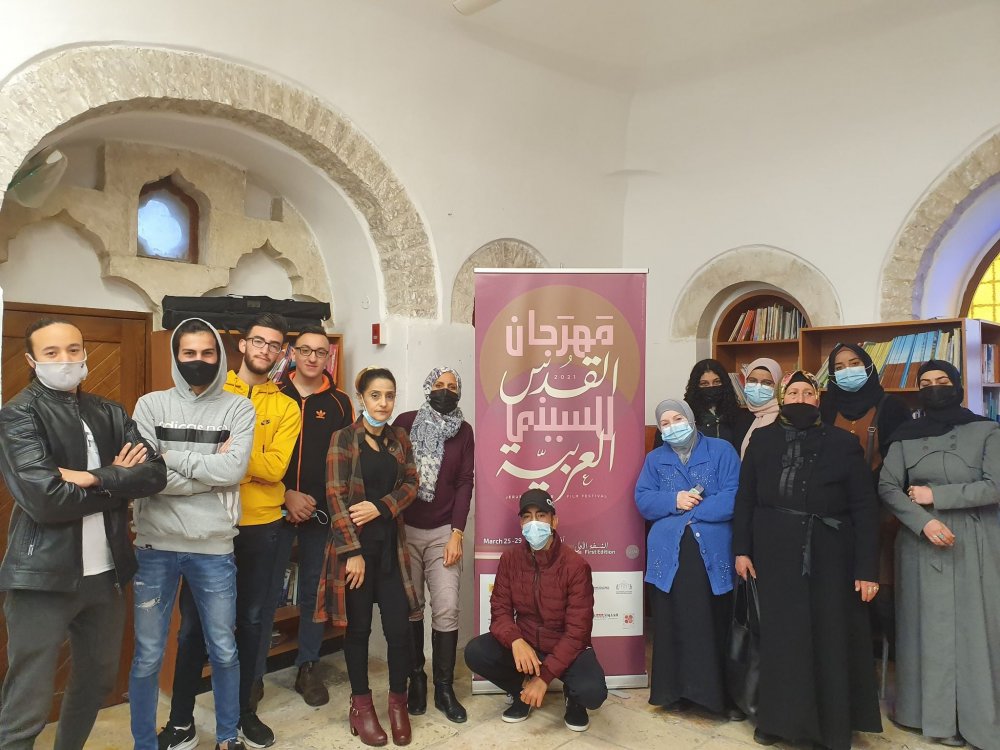 A number of the films screened at the festival have previously been honored with prestigious awards and nominations. The opening film was the Palestinian narrative feature 200 Meters, which had received almost 20 awards and was selected as the Jordanian entry for the 93rd Academy Awards’ International Feature Film category. In his debut film, the Palestinian director Ameen Nayfeh portrayed the restrictions of movement and the impact that the Separation Wall has on every aspect of life for Palestinians. At the closing event, Nayfeh humorously mentioned that although his road trip within the occupied territories was not quite as crazy as the one his characters in 200 Meters had to undertake, it was nevertheless risky for him to attend the film festival. He conveyed his delight to be physically present and to see his film screen in Jerusalem for the first time. 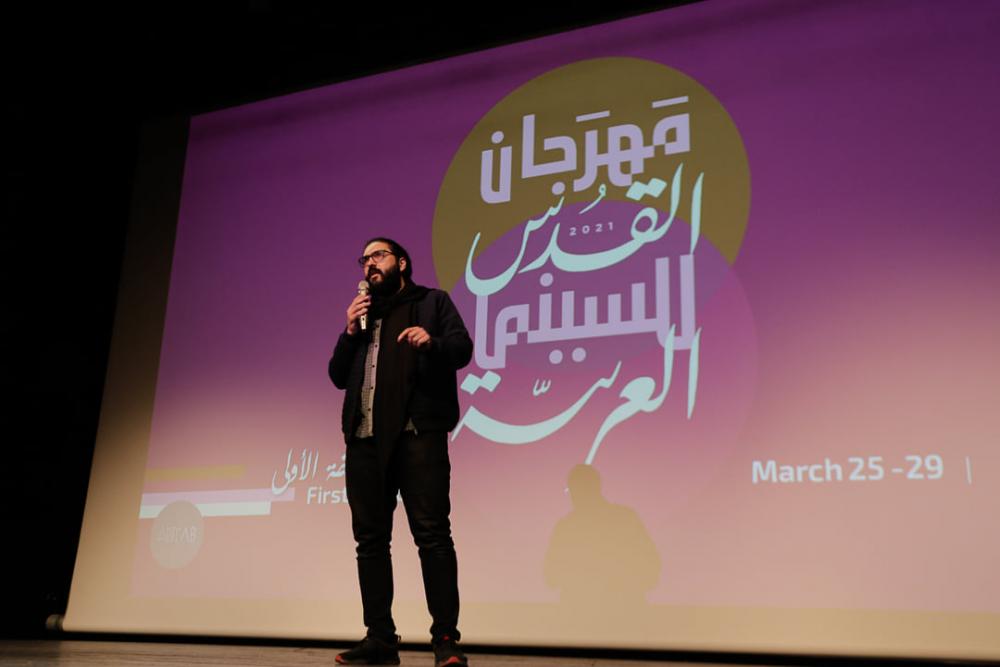 The festival included several accomplished narrative feature films: From Morocco, Hassan Benjelloun’s film For the Cause tells the story of a Palestinian man and French woman who are on their way to perform a music concert, yet they get trapped on a bridge in no-man’s-land between Morocco and Algeria. Also from Morocco was the film by Mohamed Nadif, The Women in Block J, which is set in a women’s psychiatric ward in Casablanca.

There was also When We’re Born, an Egyptian drama directed and cowritten by Tamer Ezzat, which through some musical narration portrays the tough choices its characters must make about love. This film was the last screenplay written by Nadine Shams, the talented Egyptian writer who died in 2014 at the age of 41. When We’re Born also happened to be Egypt’s candidate for the 93rd Academy Awards.

Another captivating film was A Son [Bik Eneich], an intense family drama by Tunisian director Mehdi M. Barsaoui. It was also delightful to see a film from Saudi Arabia: Scales, a surreal drama that employs folklore and imagination to highlight the role of women in society. It was directed Shahad Ameen. Scales was also Saudi Arabia’s candidate for the 93rd Academy Awards and premiered at the Venice Film Festival’s Critics’ Week in 2019.

The closing narrative feature of the film festival was the Egyptian film Curfew, which probes into the taboo subject of incest. The cast of the powerful film includes the famous Egyptian actress Elham Shahin and the celebrated Palestinian theater actor Kamal Basha. Amir Ramses, the film’s director, shared a message (which was broadcast online with the audience at the festival) in which he highlighted the importance of producing creative projects as a means to bring about much-needed change in society.

As for documentary feature films, JAFF showcased intense projects from the region. These included two films from Lebanon, namely, Underdown, directed by Sarah Kaskas—who portrayed in this film a humanistic perspective on the dark sides of living in poverty, violence, and addiction—and Beirut Terminus, a poetic picture by Elie Kamal, who focused (through his superb skills in cinematography, directing, and editing) on the shattered railway across the abandoned train station of Lebanon. From Jordan, Dina Naser’s documentary feature Tiny Souls shed light on family life from the perspective of children in Zaataari, the world’s largest camp for Syrian refugees in Jordan. Meanwhile, the documentary feature film Ibrahim: A Fate to Define shows the personal search of Lina al-Abed (the film’s Palestinian Jordanian director who lives in Syria) as she tries to trace her disappeared Palestinian father.

Notable short films were also screened during the film festival. The opening in this category was Egyptian director Sameh Alaa’s short film I Am Afraid to Forget Your Face [Stacher], where the 16-year-old protagonist must take difficult routes in an attempt to reconnect with his love after an absence of 82 days. Short fiction films from Egypt also included Ward’s Henna Party, by Morad Mostafa, which is about a Sudanese woman who works as a henna-making artist at Egyptian weddings; Extra Safe, by Nouran Sherif, about a young woman who goes to a pharmacy to buy a condom (when her mother suddenly shows up and the whole situation turns upside down); and Sunday at Five, by Sherif Elbendary, a docu-fiction short film about a woman who goes to audition for acting and finds herself having to make a life-changing decision.

Among the short films was also Tunisian director Anissa Daoud’s Le Bain [The Bath], about a young father who finds himself having to take care of his five-year-old son by himself for a few days. From Lebanon, there was Roadblock, by Dahlia Nemlich, a short film based on the Lebanese demonstrations of 2019 and where the armed forces come up against an activist couple; as well as Omé, directed by Wassim Geagea, about a nine-year-old boy who is trying to make sense of his mother’s unexpected death. Furthermore, there was Selfie Zain, by the Palestinian Amira Diab, who directed this short film about a young woman from Bethlehem determined to pray at al-Aqsa Mosque in Jerusalem. Finally, the black-and-white sci-fi short film from Palestine In Vitro, by Larissa Sansour (codirected with Søren Lind), was also screened. The film ruminates on memory, history, place, and identity set in Bethlehem decades after an eco-disaster.

In addition to the films, the festival included a few workshops, such as a session that delved into the history of cinema in Jerusalem—starting from the days of the Lumiere brothers (1897) and on to the First Intifada (the 1980s), when cinema came to a halt due to Israeli practices. This workshop was moderated by Palestinian filmmaker Mahasen Nasser-Eldin. Speakers included Samah Bsoul (journalist and cinema blogger) and Yousef al-Salhi (founder and director of the Elia Shorts Film Festival). The film festival also organized a workshop for youth (aged 18–22) on shooting short films through cell phones, as well as a tour (for visitors) highlighting Jerusalem.

“It was a dream for this festival to have taken place,” Shaheen noted after the end of the event. “Historically,” she added, “there used to be several cinema houses in Jerusalem.” Unfortunately, “the last 30 years were particularly difficult,” yet “the revival of culture is what sustains the presence of the people.”

Much like in sophisticated regional and international film festivals, the JAFF offered prizes in three categories (narrative feature, documentary feature, and short films) that were selected by an impressive list of jury members from Arab countries. It was important for JAFF to select credible juries for this first-time event. Elias Khlat, founder of Tripoli Film Festival, had a crucial role in assisting in the process.

The festival’s grand jury prize for best narrative feature film went to the Tunisian film A Son [Bik Eneich], directed by Mehdi M. Barsaoui. A special mention went to Mohamed Nadif’s film from Morocco, The Women in Block J. Meanwhile, the Palestinian film 200 Meters won the prize for best narrative feature film. The film’s director, Ameen Nayfeh, who was present at the event, dedicated the film “to every person who has ever had to stand at Israeli checkpoints.”

As for the documentary feature film competition, the jury president was Hady Zaccak (Lebanese award-winning documentary maker, professor, and author on cinema). The jury members were Zeina Daccache (founder and executive director of the Catharsis Lebanese Center for Drama Therapy) and Hala Galal (Egyptian filmmaker, scriptwriter, and producer with expertise in local and international film festivals).

It is worth mentioning that in addition to the films listed above, also contending for this category was Not Just Your Picture, by Anne Paq and Dror Dayan, which documents the story of two young German Palestinian siblings whose family is killed by an Israeli airstrike during the attacks on Gaza.

The jury prize for best feature documentary film went to Ibrahim: A Fate to Define, by Palestinian Jordanian director Lina al-Abed, which was produced in several countries including Lebanon and Palestine. Meanwhile, Underdown from Lebanon, directed by Sarah Kaskas, won the best feature-length documentary.

The drama short I Am Afraid to Forget Your Face [Stacher] (by Sameh Alaa from Egypt) won the jury’s grand prize for best short film. This was not surprising, as the film had won various prominent awards, including the Palme d’Or at the Cannes Film Festival competition for short films. Meanwhile, the special prize of the jury in the short film category went to In Vitro (by Larissa Sansour from Palestine). Special mention went to the Lebanese film Omé, directed by Wassim Geagea.

Despite the challenges of the coronavirus (the event was postponed more than once due to lockdowns) and the fact that participants had to show their COVID-19 vaccination certificate upon entry, the organizers expressed that the attendance surpassed their expectations. “I’m not sure why the attendance was good,” Shaheen commented. “This may have been due to thirst for cinema, for Jerusalem, or for cultural activities after a stagnation of 13 months. The audience was quite diverse and intergenerational.”

Social isolation due to the coronavirus pandemic may fortunately be on its way toward recuperation, yet the subject of political isolation continues to be an issue. After all, the state requires Palestinians from the West Bank or the Gaza Strip to undergo long procedures to obtain entry permits to Jerusalem, and hundreds of thousands are refused (see Banned from Entry). This is not to mention that almost all of the filmmakers and producers from the Arab world, and whose films have been screened at the festival, have only connected with Jerusalem virtually—irrespective of the coronavirus.

Still, regardless of the limitations, the festival offered a moment of hope and connection, at least for Palestinians in Jerusalem. “What makes this festival stand out is that it represented various Arab countries,” said the event’s media coordinator, Abir Bahour, at an interview shared online. “It introduced us to these cultures and had us watching films from countries like Lebanon, Tunisia, Egypt, and even Palestine. This is so beautiful!” Clearly, there was agreement that East Jerusalem is deserving of such cultural programs. Shaheen emphasized the need to revive the culture of cinema in Palestine, and Jerusalem in particular. She stressed that the team looks forward to keeping up this momentum and plans to start cinema clubs in Jerusalem.