The second annual Jerusalem Arab Film Festival (JAFF) took place in East Jerusalem from May 14 to 19, 2022, with the theme “Cinema for Jerusalem.”

The film festival, conceived of as a way to connect filmmakers from the Arab world to a Jerusalem audience, put the spotlight on Jerusalem this year and its historic and cultural significance. It also opened just days after the May 11 assassination of journalist Shireen Abu Akleh, when the city was in turmoil.

We spoke with festival director Nevin Shaheen at the end of May, after the festival, at her home in Sheikh Jarrah.

“I feel happy with the end product,” she shared. “We need children who will be exposed to arts and culture,” she said, while carrying her three-month-old daughter, Elena.

Over a five-day period, the festival screened 26 feature films and documentaries from around the Arab world, including Tunisia, Egypt, Jordan, Somalia, Morocco, Saudi Arabia, Algeria, Syria, Iraq, and Palestine. Screenings took place at three venues in East Jerusalem: el-Hakawati (the Palestinian National Theatre), the French Cultural Center, and the Turkish Cultural Center. All films were open to the public and shown free of charge.

The goals of the festival have been to:

Festival director Nevin Shaheen speaks to the media during the festival.

The films were ranked by an international jury of prominent directors, producers, journalists, researchers, scriptwriters, and editors from the Arab world; they selected what they considered the best films in three categories: feature film, documentary, and short film, and presented them with festival awards.

The festival opened with Qadha, directed by Anis al-Aswad of Tunisia. The film’s protagonist is a 12-year-old boy whose ill mother cannot afford treatment. He gets involved in a traffic accident that nearly costs him his life, and by divine intervention, he gets a second chance. The film explores sensitive social and political issues, such as illegal immigration and organ sales—all observed through the eyes of a child. The film received the festival feature film award.

The narrative feature selection continued with the Egyptian film Abu Saddam, directed by Nadine Khan and starring Mohamed Mamdouh, both of whom won several prestigious awards for their roles in this road movie in the day of an experienced truck driver and his young new apprentice. By the end, the film offers a portrait of toxic masculinity.

From Morocco, the drama Final Round, directed by French Moroccan Mohammed Fekrane and Gustavo Cortés Bueno, tells the story of Rachid, a young man who dreams of becoming a world-famous boxer. He boxes daily in Morocco to make enough money to pay a smuggler so that he and his friend, Salek, can cross the Strait of Gibraltar from Tangier and reach Spain.

Crossing borders was also the theme of Europa, directed by Haider Rachid from Iraq. The film, which won honorable mention, told the story of three days in the life of Kamal, a young Iraqi man who attempts to walk from Iraq to Europe and gets into all sorts of trouble at the Turkish–Bulgarian border.

Meanwhile, a lighthearted film was State of Agitation from Lebanon by Elie Khalifé. Titled “Iltillak Khalas” in Arabic, which literally translates to “Enough, I told you,” the drama revolves around an enthusiastic filmmaker in Beirut with an overflow of ideas and whose characters go through strange circumstances. 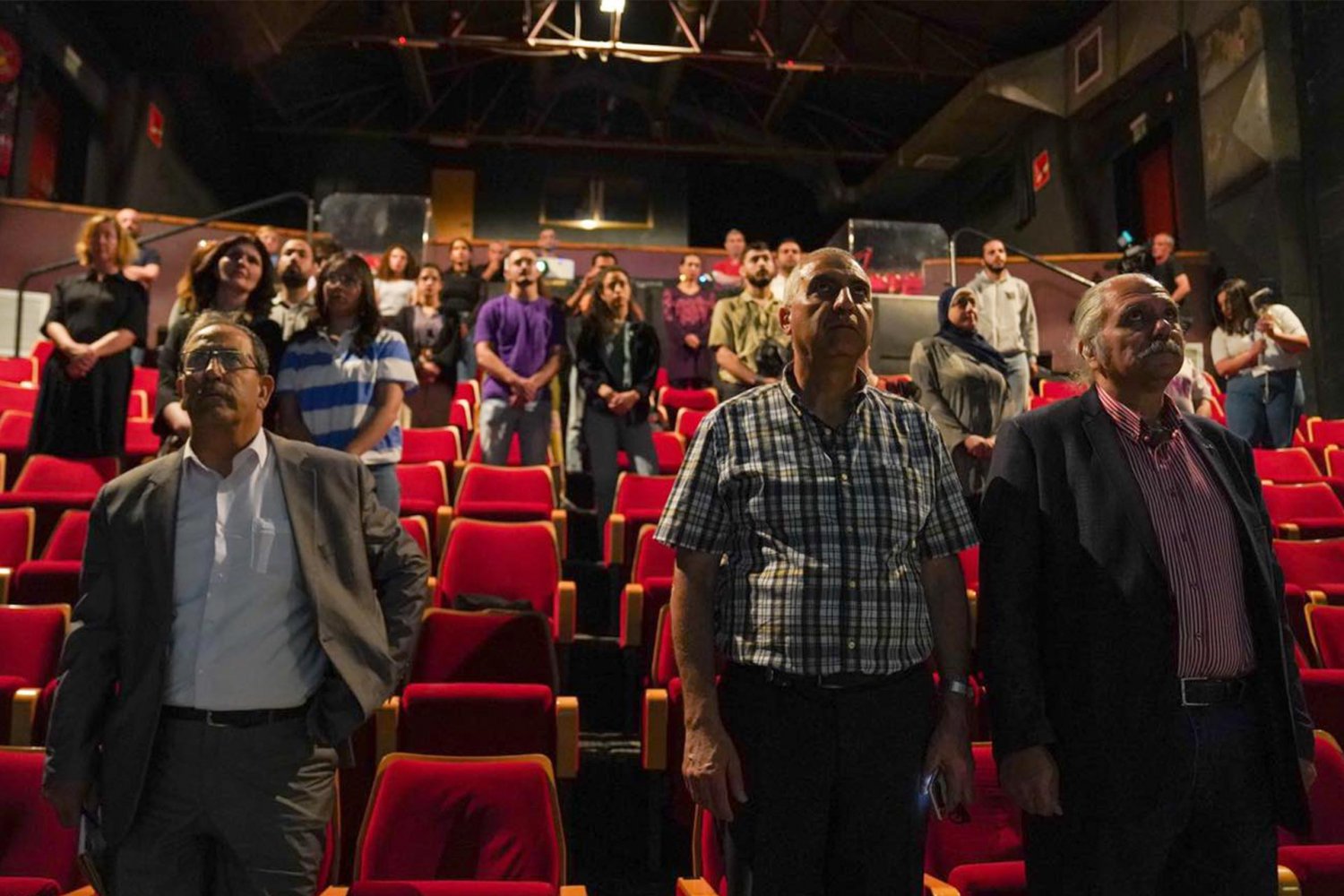 Audiences enjoying a screening during the second annual Jerusalem Arab Film Festival, May 2022 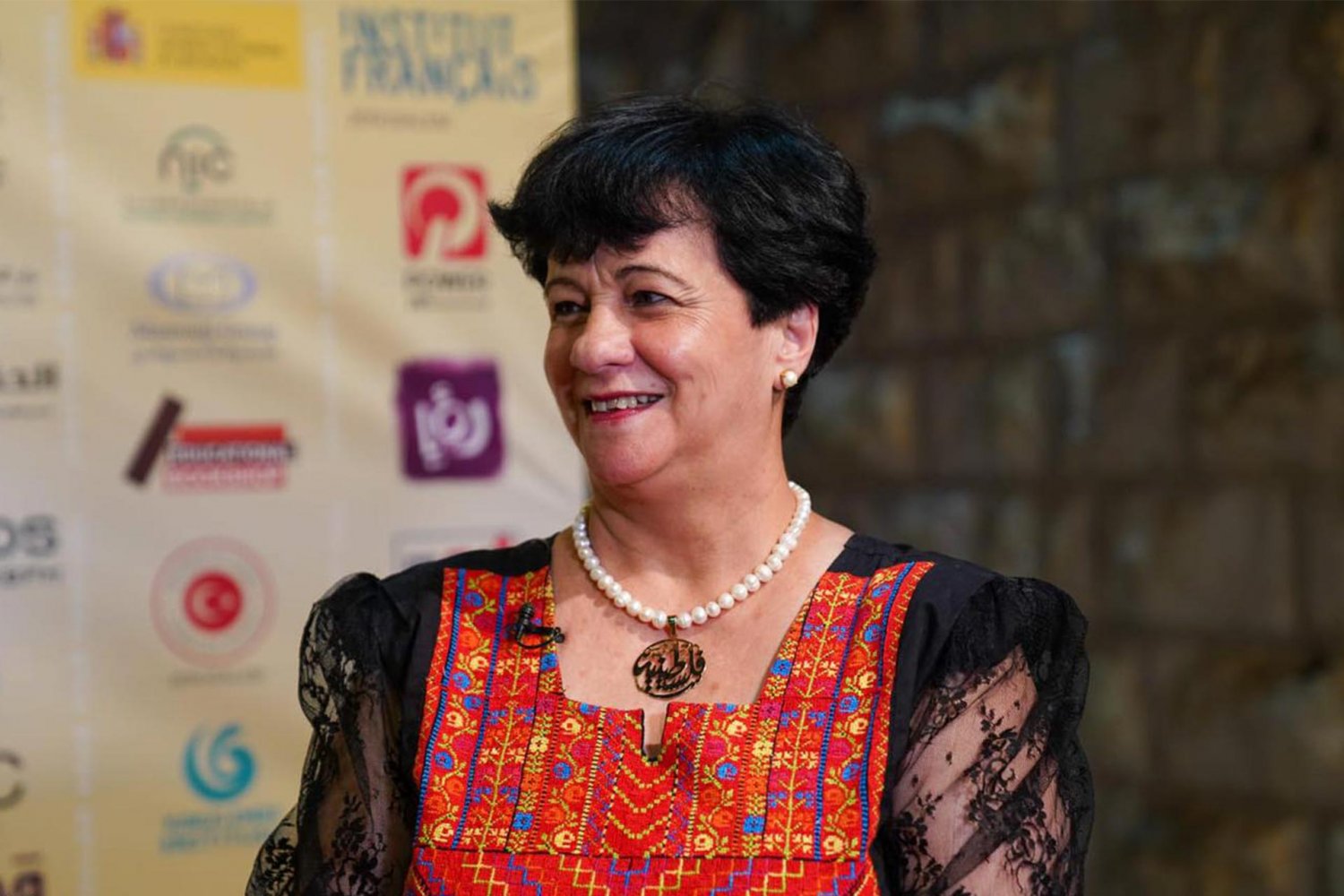 Doctor Jumana Audeh was clearly enjoying herself at the second annual Jerusalem Arab Film Festival, May 2022, in East Jerusalem.

The Palestinian drama The Stranger was in fact directed by a young Syrian from the occupied Golan Heights, Ameer Fakher Eldin. The film was nominated by the Palestinian Ministry of Culture and was Palestine’s submission for best international feature film to the 94th Academy Awards. The film takes place in the occupied Golan Heights and tells the story of a bitter doctor who experiences an existential crisis before meeting a mysterious soldier from the war in Syria. In an interview with Al Jazeera, the director expressed his pleasure at representing Palestine at the Oscars; he called it “a moment of honorary adoption, especially since we share the suffering and the state of waiting with the Palestinian brothers, and although the film takes place in the Golan [Heights], I see it as a general cinematic film that does not belong to one country only, but to the greater homeland, which is the Arab world.”1

JAFF Trailer for narrative feature films in its second edition, May 2022

Among the documentaries, Captains of Za‘atari, directed by the Egyptian Ali al-Arabi, is a powerful film (to be featured on Netflix) about two best friends who share a dream to become professional football [soccer] players, yet are trapped in a refugee camp in Jordan.

In Diary of Gabrielle Street, Palestinian filmmaker Rashid Masharawi documented his experience (using a phone camera) during the coronavirus quarantine/siege in France. In those dystopic times, the main character reflects on his memories as a refugee from Gaza who is now living in a small, cramped apartment in Paris.

Another documentary Palestinian production (in cooperation with the Spanish Consulate) was Doomed in Gaza. Directed by Ana Alba Garcia and Beatriz Lecumberri, the film focuses on the harsh living conditions of women who are battling with cancer in Gaza. 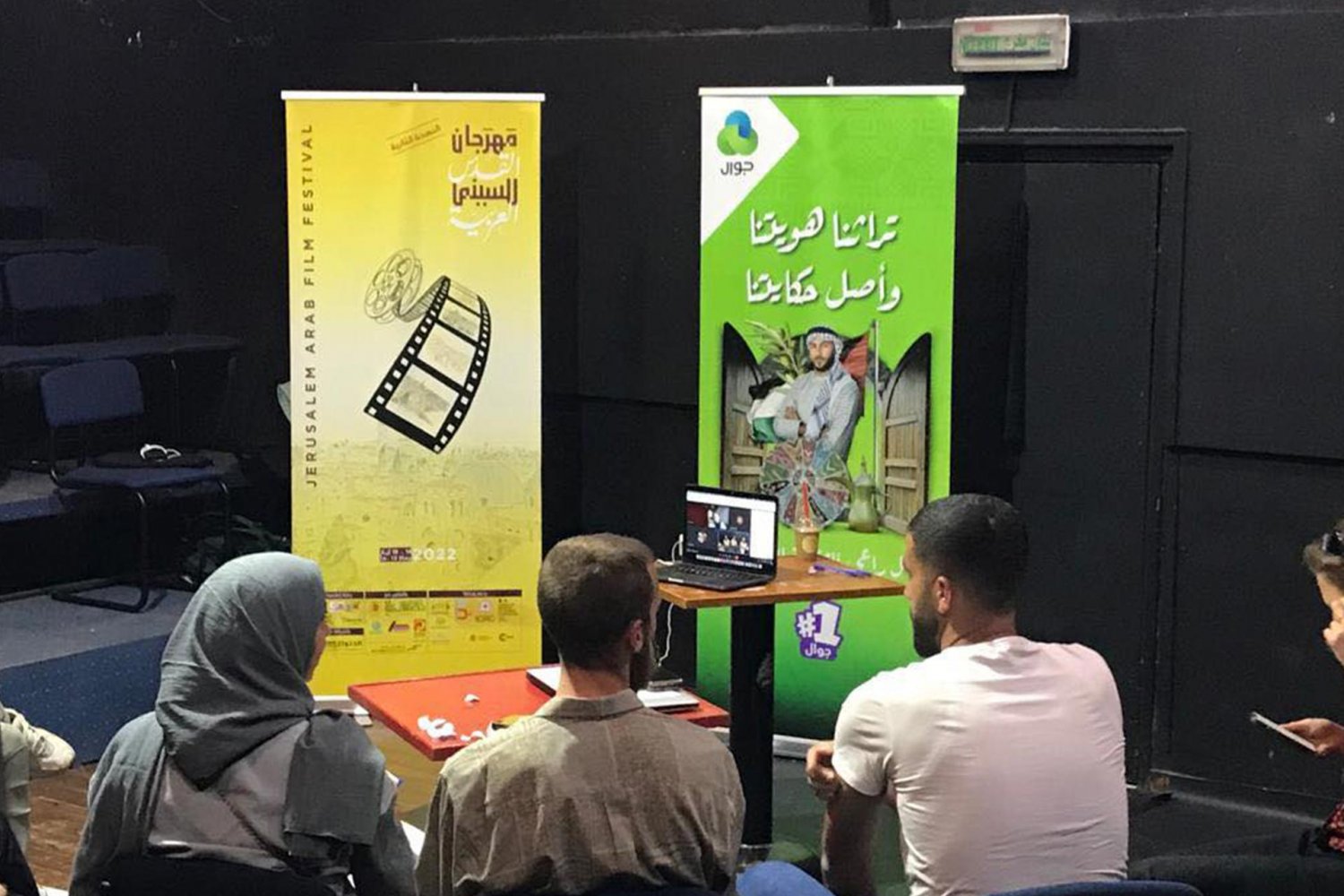 Screenwriting for Youth workshop at el-Hakawati (the Palestinian National Theatre), May 2022

In this edition of the festival, the organizers inaugurated a new award: the annual Shireen Abu Akleh Documentary Film Award.

The winner of the first “Shireen Abu Akleh Film Award” was the Lebanese film Re-Destruction directed by Simon El Habre. It focuses on the disastrous explosion at the port of Beirut on August 4, 2020, and shows the infrastructure weaknesses that put all Beirut residents at risk.

Also from Lebanon were two powerful women-directed documentaries: The first was The Blue Inmates, the third film of Lebanese actress and director Zeina Daccache. In it, she documents the plight of prisoners with mental health conditions who are sentenced “until cured” (i.e., for life, especially considering that no psychological treatment is offered) and housed in the Blue Building of Beirut’s notorious Roumieh prison. In the film, Daccache organizes the other inmates to produce a play about the Blue Room inmates and convey their messages to the outside world. The second was Al Jidar/The Wall by Palestinian actress and director Mira Sidawi—about four teenage Palestinian refugees who attempt to convince Pink Floyd’s cofounder, bassist, lyricist, vocalist, and conceptual leader Roger Waters to reunite with the band and have a live concert in their refugee camp, Shatilla, in Lebanon.

Meanwhile, the winner of the festival’s documentary award was an Egyptian film, From Cairo. In it, Egyptian director Hala Galal tells the story of a single mother, Heba, who struggles to make ends meet by working as a photojournalist. She meets Aya, who lost her parents at a young age. The film probes into the challenges of living as a woman in Cairo and confronts the cruel and intimidating stances of the society against women.

A variety of short films were also screened. The festival’s award for best short film went to Will My Parents Come to See Me? by the Somalian filmmaker Mo Harawe, who investigates the Somalian justice system through the perspective of a prison officer and a young inmate.

The festival thus has an educative role, especially when considering that the screenings are not commercial films but rather profound cinematic expressions of the realities on the ground in Palestine and throughout the Arab world.

In addition to the film screenings, the festival offered workshops in screenwriting and cinema critique with a focus on Palestinian cinema. The meetings gave the chance for the Palestinian audience, particularly the youth, to meet with filmmakers as well as to demonstrate their own talents. In addition, the program included a tour in Jerusalem, where participants explored the Old City.

JAFF Trailer for documentary feature films in its second edition, May 2022

Cultural Work Despite the City’s Struggles

Unfortunately, yet unsurprisingly in the context of Jerusalem, the festival’s attendance declined from that seen at its first edition last year due to the tragic events that occurred in this exact period. After all, Abu Akleh was killed on May 11, 2022, and her massive funeral was held in Jerusalem on May 13. Only three days later, the city witnessed the Israeli police’s attack, on May 16, on the East Jerusalem funeral of Palestinian Jerusalemite Walid al-Sharif, 23, who died from a fatal head injury suffered during a police raid on the al-Aqsa Mosque a month prior. All these turbulent events took a toll on the festival’s mood and attendance.

Despite everything, the organizers (a small team) maintain full conviction in the importance of culture to society, regardless of the situation on the ground. Filmmakers and individuals from the Arab world had a key role in the successful delivery of the program. Shaheen observed that for the first time, a cooperative connection was established between the festival and Dar El-Nimer for Arts and Culture, a nonprofit art foundation based in Beirut, Lebanon.

Despite their proximity, each country in the region struggles with its own challenges, which remain virtually unknown to others beyond their borders. Shaheen observes, “It is important to know that we are not at the center when it comes to agony; we are not the only ones who are suffering. This is good to know in terms of mental health. Cultural activities, in this sense, are an important reminder for us to recognize that although we live in a tough city, we are not alone.”

Filmmakers and individuals from the Arab world had a key role in the successful delivery of the program.

The Jerusalem Arab Film Festival (JAFF) opens the Screens of Hope and Imagination with exquisite films from the Arab region.