The deputy mayor of Jerusalem, Arieh King, posted an announcement on his Facebook page on November 9, 2022, on behalf of an anonymous Jewish philanthropist launching a new “incentive” program to encourage non-Jewish emigration from the country. Offering to introduce any non-Jew who wished to emigrate to this person who would offer compensation for such a move,1 he wrote:

The post was accompanied by a picture of Irish immigrants arriving to New York City in the 19th century. 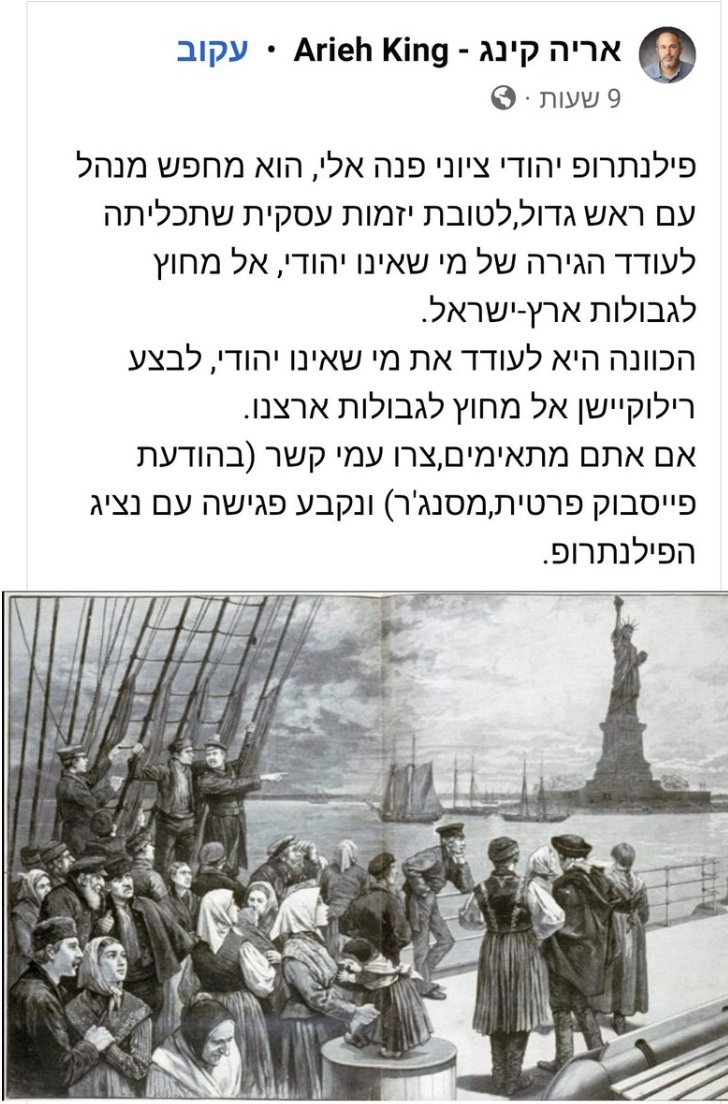 A post on the Facebook page of Arieh King, deputy mayor of Jerusalem. The photo in question can be found on the Internet; for example, here.

Referring to it as a “business venture,” he stated in an interview with HaMakom Independent Magazine, “the idea is to encourage non-Jews to relocate outside the borders of Eretz Israel”3 [ i.e., all of historic Palestine].

On October 30, he posted on his Facebook page another short notice in Hebrew which read:

And at the same time, to reward with money, really an “emigration basket,” anyone to whom the Law of Return does not apply [i.e., non-Jews] and who will leave the country voluntarily. In exchange for a waiver [surrendering] of course, the status of Israeli citizenship and/or Israeli residency.4

These ideas are in line with King’s general philosophy, expressed in an interview in 2014, when he said, “What I advocate is voluntary transfer. If you offer Arab residents the option to leave, they will take the money and run.”5 That, however, was in reference to buying homes.

The latest proposal ups the ante. According to a report on the plan in Haaretz:

King refused to use the term “transfer,” claiming instead that the plan is better seen as an encouraged “business-relocation” for non Jews. “If we’ll manage to get a quarter or half a million Arabic speakers out of the country, that will be enough,” he clarified.6

“If we’ll manage to get a quarter or half a million Arabic speakers out of the country, that will be enough.”

Arieh King was appointed deputy mayor by the elected mayor of Jerusalem, Moshe Leon, in 2020. Previously King was a member of the Jerusalem city council. At the time, Leon expressed his support for his new deputy in these words:

Arieh is a robust man of action and I have no doubt he will continue to contribute much to all residents of Jerusalem in his role as deputy mayor. I thank him for consisting to serve without pay at this time, [adding that by doing so King was] setting a praiseworthy personal example.7

King, a supporter of the extreme right-wing party Otzma Yehudit (Jewish Strength) led by Itamar Ben-Gvir, is also the founder and director of the Israel Land Fund, founded in 2006, whose goal, in King’s words, is to “redeem the land of Eretz Israel, to continue what Avraham Avinu started and Itzhak and Jacob, continue, and this is by buying land from Arabs and from churches in Eretz Israel and pass it to Jewish hands, is one thing. Second thing is to find Jewish property that Arabs invaded into and squattering onto this land and built illegal buildings and to help the Jews who own it.”8

By “redeem,” he means transferring from Arab ownership to Jewish ownership (in perpetuity). According to the website of the Israel Land Fund, it “strives to ensure that the land is returned to Jews and maintained by Jews . . . House after house, plot after plot, the Israel Land Fund guarantees that the Land of Israel will remain in the hands of the Jewish people forever.”9

In 2015, King proposed granting all Palestinians of Jerusalem citizenship out of the same motivation—in hopes that they would leave the city. According to a report in the Jerusalem Post at the time:

“If you offer Arab residents the option to leave, they will take the money and run.”

. . . now he [King] wants to give all the 300,000 Arab residents full Israeli citizenship—his time, as the only means to enable thousands of these Arab residents to leave Jerusalem and reduce the demographic issue.

King believes that once they have full citizenship, their first interest will be to seek better living and educational conditions outside Jerusalem, as they will no longer fear losing their social rights and their residency rights in Jerusalem. King is convinced that the last thing these people would do is vote for the Knesset and eventually increase the number of Arab representatives in parliament.10

Peggy Cidor, “This Week in Jerusalem: America in Jerusalem,” The Jerusalem Post, November 20, 2022.

Itay Ron, “‘Point of No Return’: Deputy Mayor of Jerusalem Is Involved in an Initiative to Encourage Arab Immigration” [in Hebrew], HaMakom Independent Magazine, November 10, 2022.

“About the Fund,” website of the Israel Land Fund.

The founder and director of the Israel Land Fund, Deputy Mayor of Jerusalem Arieh King, describes the fund’s goals in his own very explicit and unequivocal words.

Jerusalemite who dedicated his life to public service and strengthening the city, including as mayor 1957–67; popularly known as the “Amin of Jerusalem”