A Love Story from East Jerusalem: Majd and Fatima

“I still can’t believe he’s here . . . next to me.” Fatima Barbar recently shared this overwhelming feeling with various Palestinian news outlets. She has been waiting anxiously for more than two decades to have her husband, Majd Barbar, a Palestinian Jerusalemite from Ras al-Amud, back.

Fatima and Majd met at a summer camp when they were only teenagers. They fell in love right away and eventually got married. They lived together a little over two and a half years and had two young children.

Then on March 30, 2001, Majd was arrested by the Israeli authorities. He was accused of having a role in armed resistance and of being affiliated with the Popular Front for the Liberation of Palestine. He was sentenced to 21 years.

On the day that Majd was arrested, their son, Muntaser, was one year and seven months old. Their daughter, Zeina, was 15 days old. “There was not a single day when I did not wish for my husband to be standing next to me,” Fatima shares.

To make matters worse, her beloved brother, ‘Alaa ‘Ali, was also arrested; he was sentenced to 12 years.

Overnight, Fatima—the loving wife who needed her husband beside her—had to deal with a completely new reality.

Raising two children without her husband was challenging, to say the least. Fatima recalls one incident when she felt completely alone. Her son had gotten very ill, and at 2 a.m. she felt that she had to get him to the hospital. With no family members nearby and no car, she carried him. When she got to the hospital, the gates were closed. “Standing there all by myself at 5 a.m. with my ill son on my shoulders was one of the most difficult moments I went through.”

She mentions the many tears she shed over the years when she felt completely restricted by her circumstances. She talks about times when she felt depressed. Still, she never considered not waiting for her husband’s release. “What helped me most was my own faith in myself,” she explains.

“There was not a single day when I did not wish for my husband to be standing next to me.”

Fatima’s story became well-known among Palestinians in Jerusalem. She was often interviewed on TV programs that were accessible to her husband and other political prisoners. “It has been such a difficult struggle to be away from the man I love, not to mention having to fill the role of both parents for our two children,” she shared.

She resorted to a mind game: Instead of thinking about the length of his actual sentence, she agreed with her husband that they would think of it as just one year. At the end of one year, the mind game would begin again.

Years passed. The family did what they could to keep Majd present among them. They sustained communication whenever possible and wrote him letters. He was never far from their thoughts. They visited him whenever they could—which unfortunately was often less than once a month.

Looking through the family photos, it is evident that the father missed out on precious moments. One photo of Majd with his daughter Zeina was taken when she was a newborn. The next photo of the two of them together was taken 15 years later, on a day when Majd was allowed to get out of his prison cell and meet with his family without a barrier. “It was an extremely difficult yet joyous moment,” Fatima recalls. That was the first time Zeina got to hold her father.

Now in their twenties, Muntaser and Zeina both got good grades in high school and went on to pursue their education: Muntaser studied law, and Zeina went for economics. Majd has also pursued graduate studies while imprisoned. Passionate about education, he made his kids promise him to take their studies seriously. 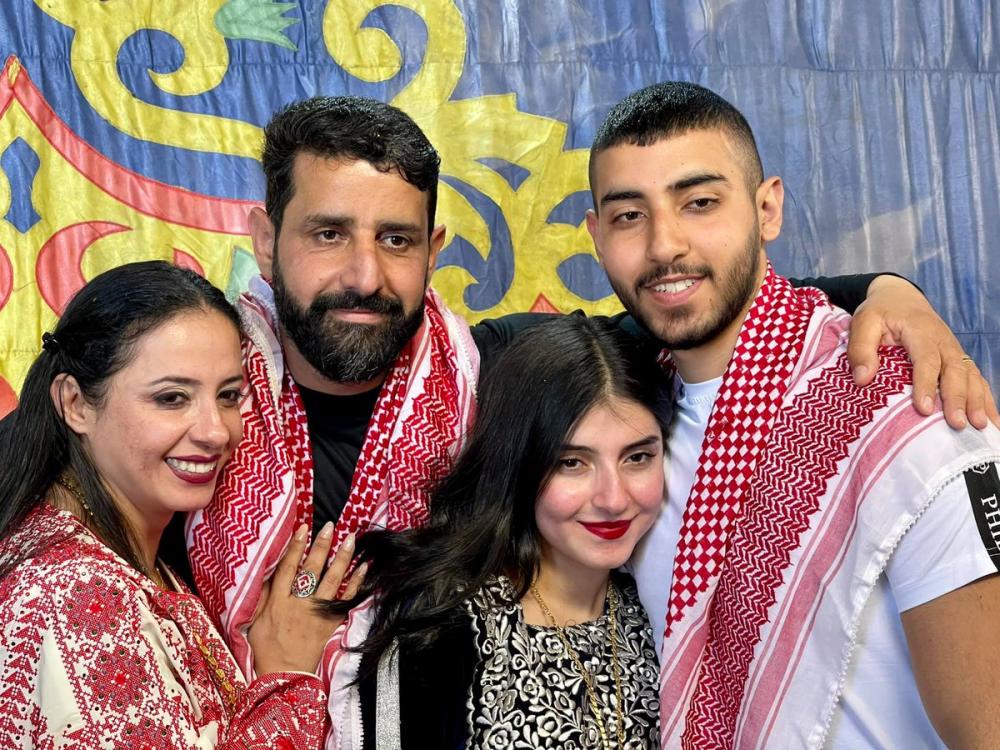 “I am proud of myself to have reached so far,” says Fatima on how she managed to sustain the family through her work and raised their children well. “My love for my husband gave me endurance. My family, friends, and colleagues were a great source of support. I am so proud to be among my female friends [from the Palestinian Women’s Committees and others]—my sisters in solidarity. They kept me strong.”

Imprisonment as a Common Palestinian Experience

For Palestinians in Jerusalem and living under Israeli occupation generally, political imprisonment is often not associated with an act, but rather with ideology or potential opposition to the state and its absolute control. The Barbar family, like many Palestinians, consider that the state deliberately attempts to marginalize or even erase the Palestinian presence in Jerusalem. Acts of “disobedience,” such as demonstrating, holding the Palestinian flag, commenting on social media, or simply being a proud Palestinian, could lead to serious consequences.

“The Israeli jail is quite cruel and extreme,” Majd recounts. “It is part of a systematic policy that targets the Palestinian cause and seeks to extinguish it.” Denying political prisoners their right to see their families and loved ones, in his opinion, is one measure intended to break their spirit. Yet he insists that Palestinians will persevere: “Despite all attempts to erase the Palestinian people, the principled person who believes in the Palestinian cause will hold fast to those roots—even if he stays another 20 years in jail!”

When asked to share his thoughts about being in prison, Majd expressed that he was “at peace during this entire time, despite all the horrendous circumstances and torture . . . I always believed that resistance is the only option we have. We must remain rooted like the fig and olive trees, despite all the settlement expansions, erasures, and destructions.”

He particularly emphasizes the value of human beings: “We as Palestinians, Muslims and Christians alike, are rooted in the land . . . We belong here [in Jerusalem]. This is our identity, our culture, our language, and our folklore.”

Fatima held on. Palestinians who know her story regard her as an icon of patience. “I married my husband for love,” she shared in TV interviews conducted throughout the years. “When you love someone, you would wait an entire lifetime for them.”

“We must remain rooted like the fig and olive trees.” 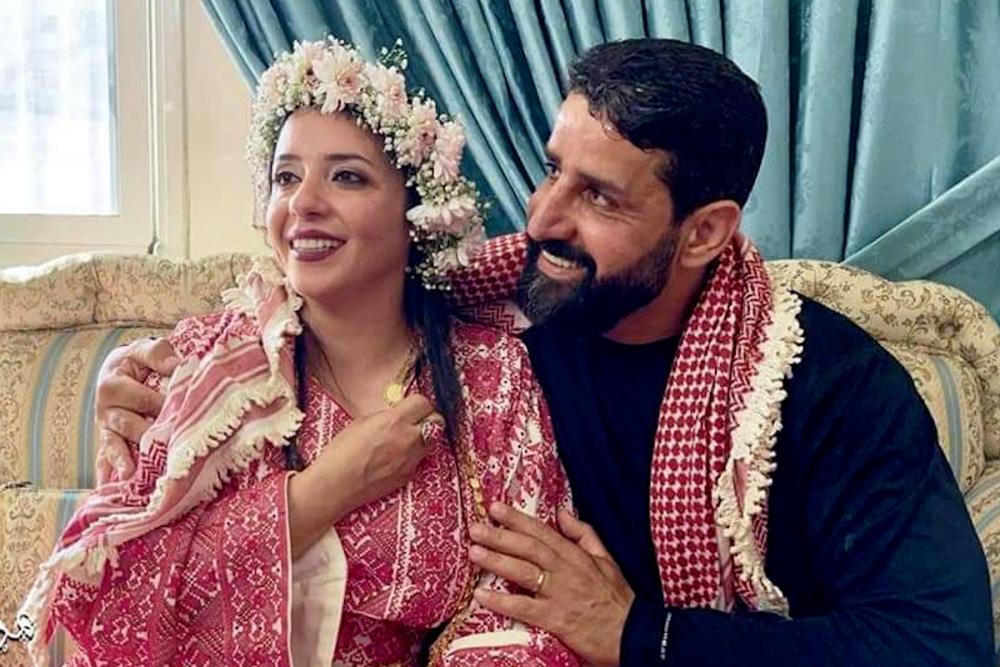 Majd and Barbar sitting on their couch—the day of his release, March 29, 2021

Fatima’s friends recall how she had often told them she would plan a wedding procession on the day of her husband’s release. Finally, on March 29, 2021, Majd Barbar was released from prison. His welcoming party was indeed like a Jerusalem wedding. Ras al-Amud was packed with tens of people: Women were dressed in colorful Palestinian thobes, men in red kufiyyas, and the sounds of the dirbakka drum filled the street. Fatima wore a dress that she had women from Gaza make for the occasion. The event trended on social media platforms and instilled a sense of hope for its joyful inhabitants.

The day of his release from prison, Majd’s welcoming party was like a Jerusalem wedding.

Looking at the celebratory videos, the love shared by the couple seems palpable. After the interminable years of waiting, Fatima and Majd have surprisingly maintained the fresh thrill of infatuation. They are surrounded by elated Palestinian women who are all dressed in the Palestinian thobe and men who surround Majd and at some point carry him on their shoulders.

At one point in the video, Fatima jumps up and runs toward her husband. In disbelief, Majd ecstatically carries his daughter, then his wife, and then shares a bear hug with his family, an embrace that seems to wrap all East Jerusalemites together in a collective euphoria.

“She is my homeland,” Majd says of Fatima once they sit down on their couch at home. “This woman managed to provide for her children and husband for 20 whole years. This is the power of the Palestinian woman!”

One day after this grand celebration, the Israeli forces invaded the house of Majd and Fatima Barbar in Ras al-Amud. Still in celebration mode, the residents of East Jerusalem—not to mention his wife, parents, and children—were horrified to witness Majd getting rearrested. “We will not be defeated!” he called out as the Israeli forces took him away.

The premise for rearresting Majd was that he violated some of the conditions of his release. He was supposed to remain confined to house arrest and not celebrate in the streets—particularly in the West Bank (which was the family’s plan for the next day). No one believed this. After going to the interrogation center and involving his lawyer, Majd was released the next day.

Evidently, the Israeli court had tried to impose several conditions on Majd before his original release. But he had his own conditions, too: “I demanded to come back to my home in Jerusalem,” he explained. “There is great symbolism in being from Jerusalem. I would not let them take my house away or to fabricate history . . . Jerusalem is the foundation.”

When the family was asked why Majd was rearrested, the shared sentiment was a variation on this theme: “It’s because we had a Palestinian wedding and showed off our beautiful dresses . . . It’s because we were happy!” Majd, on the other hand, considered his rearrest as a warning and a reminder that the authorities are in charge.

The story of Fatima and Majd stands as a testimony to the power of love. Theirs is a love that is certain of itself, capable of withstanding cruel and arbitrary imposed separation.

In a recent interview weeks after Majd’s release, Fatima still looks exhilarated that her husband is back. “I still can’t believe he’s here, next to me,” she says. The couple then smiles about one of the first things Majd wanted to do upon his release after more than twenty years: to eat some good knafeh from East Jerusalem.

Editor’s Note: According to the Addameer Prisoner Support and Human Rights Association, as of May 2021, there are around 4,400 Palestinian political prisoners, of whom 160 are children, 39 are women, and 320 are from East Jerusalem.

From 1967 to 1993, successive Israeli governments laid the foundations for an expanding settlement enterprise to Judaize Jerusalem and its surroundings.