At midnight on June 30, 2022, Yair Lapid, 58, became the 14th prime minister of Israel, a caretaker prime minister in an interim transitional period until the next elections, scheduled for November 1, 2022. He succeeded Naftali Bennett, who will be remembered as the shortest-serving leader in the country’s history—one year. The new prime minister, a former successful journalist and leader of the centrist Yesh Atid party, is no stranger to Israeli politics, the Palestinian and Arab presence in Jerusalem, or the history of the torn city. Nonetheless, he and wife Lihi opted to move into the magnificent home of Hanna Salameh—a wealthy Jerusalemite who was exiled and dispossessed in 1948, in the West Jerusalem neighborhood of Talbiyya—while security upgrades are made to the prime minister’s official residence just down the road on Balfour St. The move took place on July 2, 2022, and the decision has been widely condemned.

Israeli prime ministers have historically refused to inhabit the confiscated homes of Palestinians, despite having been instrumental in the dispossession of hundreds of thousands of them. Indeed, David Ben-Gurion and Levi Eshkol, two former prime ministers, did not move into Palestinian homes upon assuming power. Ben-Gurion, first prime minister of Israel and one of the architects of the Zionist strategy of transferring Palestinians out of historic Palestine, evidently said about the matter: “It’s inappropriate for an absentee’s property to serve as the prime minister’s residence.”1

“It’s inappropriate for an absentee’s property to serve as the prime minister’s residence.” 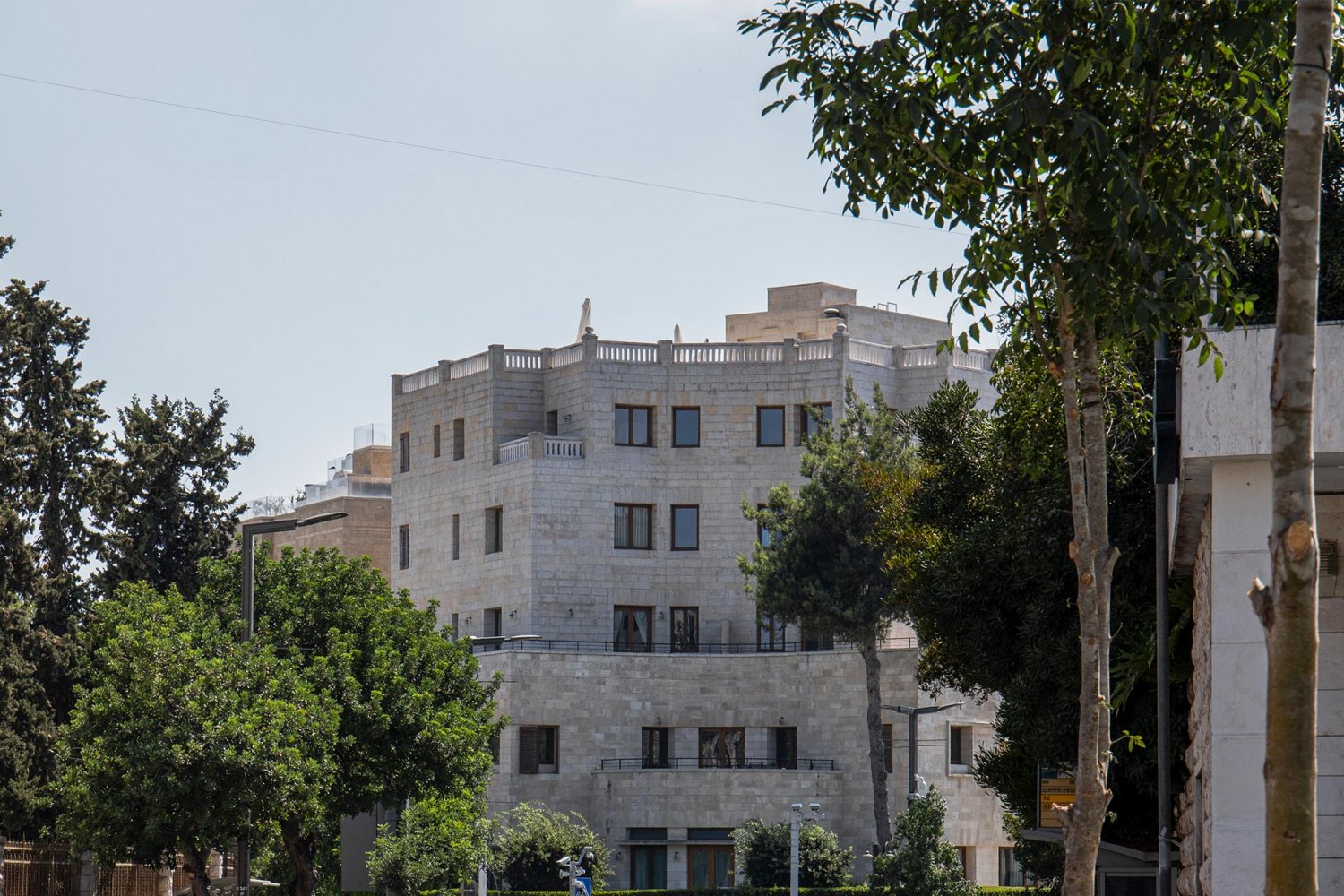 So why did the Lapids move into the extravagant villa, which still features an iron grille with the inscription “Villa Salameh” as well as a placard explaining the history of the villa in three languages?2 Lihi even posted about the move with a photo of her suitcase beside flowers in the lavish living room on her Instagram account. The caption read “New start,” and Lihi included an emoji of the blue eye, a symbol used across the Middle East to ward off evil and protect from envy.3 What could the Lapids possibly need protection from? Perhaps it is the ghosts of the home’s original inhabitants.

While the Salamehs originally came from Beirut, they were considered to be part of the fabric of Jerusalem. Hanna’s brother, Constantine, was married to Catherine Abouassan, whose family traces its roots in Jerusalem as far back as 1643.4 Moreover, the Salamehs invested heavily in the growth and development of the city. Hanna, a prominent businessman who represented General Motors in the region, built his family villa in 1932—on land that was purchased from the Greek Orthodox Patriarchate for the larger family—with the intention of creating a family quarter in the New City neighborhood of Talbiyya. Designed by Jewish Hungarian architect Zoltan Hamat, the villa stood among several glamorous properties across Jerusalem’s New City neighborhoods. Indeed, Constantine built a palatial villa just 300 meters away (one of the largest in Jerusalem, designed by French architect Maurice Favier who also built the French consulate in Jerusalem), as well as two apartment blocks around a square that was named after him (Salameh Square). The square was renamed Orde Wingate5 Square by Israel.

Constantine Salameh was one of the largest landowners in Palestine at the time; the villa was “just the tip of the iceberg,” according to his grandson (also named Constantine).6 The grandson further related:

The Salamehs invested heavily in the growth and development of the city.

[Constantine] was fond of the villa and felt for it like a person feels for his home, the place that reflects his soul, the values he was raised in and his aesthetic sensibility. However, my grandfather didn’t talk much about the villa, maybe because he wanted to lower a curtain over the memories and the things he loved, like his good friends in Jerusalem and his relatives there.

The Salameh properties represented Jerusalem’s cosmopolitan, sophisticated, and modern identity before an estimated 73,256 Palestinians fled or were forcibly exiled from the city and its surrounding villages during the 1948 War. Among the last to flee the neighborhood of Talbiyya, the Salamehs were forced to leave their home on March 13, 1948. Believing they would only be away a few weeks, they took nearly nothing with them and sought refuge in Lebanon. In 1950, Israel seized the property under the Absentees Property Law (see The West Side Story). The Salamehs were never allowed to return to Jerusalem or their homes.

The Lapids are now installed in the Villa Salameh. As Odeh Bisharat, a columnist for Haaretz, sardonically remarked: “Now, we can do nothing but wish the Lapids sweet and pleasant dreams in their new home and hope those dreams won’t be visited by the ghosts who, with great insolence, still roam about here and there.”7

Backgrounder The West Side Story, Part 1: Jerusalem before “East” and “West”

Odeh Bisharat, “Would You Agree to Live in the Home PM Yair Lapid Just Moved Into?” Haaretz, July 4, 2022.

Nadia Aboussouan, “Generations of a Family in Jerusalem,” This Week in Palestine.

Orde Wingate was a senior British army officer who served as an intelligence officer for the mandate authorities. An ardent Zionist, he operated closely and in absolute lockstep with Zionist leaders, spearheading the plan to form joint British-Jewish counterinsurgency military units called the Special Night Squads. Yigal Allon and Moshe Dayan were reportedly among those chosen personally by Wingate to serve in these units.

Bisharat, “Would You Agree?”

Nadim Bawalsa is a historian of modern Palestine and has written on the emergence of Palestinian diaspora communities across Latin America in the early 20th century. His work has appeared in the Jerusalem Quarterly, the Journal of Palestine Studies, and NACLA Report on the Americas. He earned a joint doctorate in History and Middle Eastern & Islamic Studies from New York University in 2017, and a Master’s in Arab Studies from Georgetown University’s Center for Contemporary Arab Studies in 2010. In 2019–2020, he completed a PARC-NEH fellowship in Palestine, during which he conducted research and gave lectures throughout the West Bank related to his forthcoming book with Stanford University Press (2022), Transnational Palestine: Migration and the Right of Return before 1948. In addition to his work with the JSP, Nadim is al-Shabaka's Commissioning Editor.