The Yabous Cultural Centre, in collaboration with the Edward Said National Conservatory of Music and El-Hakawati Palestinian National Theatre, launched the 25th Jerusalem Festival on August 8–13, 2021.

The Yabous Music Festival, which was held annually for several years, was cancelled in 2020 due to the coronavirus pandemic. Despite the lack of international visitors in 2021, the festival nevertheless took place, and it celebrated new local talent.

On the opening day, attendees and passersby enjoyed the outdoor music performance of Muhammed Salaymeh, Issa Mashal, and Elias Arbeed. The skillful oud player Canaan Ghoul also joined the trio (and he had a solo performance on August 10 at Burj al-Luqluq in the Old City of Jerusalem).

The grand opening of the festival featured the Haifa-based Faraj Suleiman, whose music is influenced by Arabic culture as well as jazz traditions. His album Better than Berlin has become hot among Palestinians worldwide. The album, released during the pandemic and livestreamed on social media platforms, largely resonated with individuals from different age groups.

The evocative lyrics, written by Majd Kayyal, delve into serious subjects such as gentrification, colonialism, and racism, yet they also maintain a quirky spirit. For example, the song “Questions on My Mind” (a favorite for many) conveys the social eccentricities and tittle-tattles of the Palestinian community in Haifa.

Despite the temptation of the youth to just leave it all behind and emigrate to Europe, the song reminds them that the sweet charm of the neighbors, families, and love stories of Haifa cannot be found elsewhere. Despite the occasional irritations of one’s hometown, what Haifa (and Palestine) offer is unparalleled, even “better than Berlin.”

His album Better than Berlin has become hot among Palestinians worldwide.

The song has a back story that is worth noting: In the same year the album was released, Majd was arrested by the Israeli police at his home in Haifa. Majd’s mother, political activist Suhair Badarni, said that the Israeli police broke into their house at 6 a.m. on December 8, 2020. They raided Majd’s room and handcuffed him and his brother Ward.

Both sons were detained for five days and were not given a reason; Majd later claimed that the purpose was to intimidate them. During the May 2021 protests in solidarity with Jerusalem’s Palestinians, Suhair was also arrested for 24 hours by the Israeli border police.

On his Facebook page, Majd wrote that such arrests are a small price to pay when considering that the protests have the ultimate goal of preserving the smiles and laughter of the children of Jerusalem, Gaza, and Lydda.

Organizers knew that the festival would get off to a great start when tickets to Faraj and Majd’s opening performance sold out in a matter of hours. And it did. 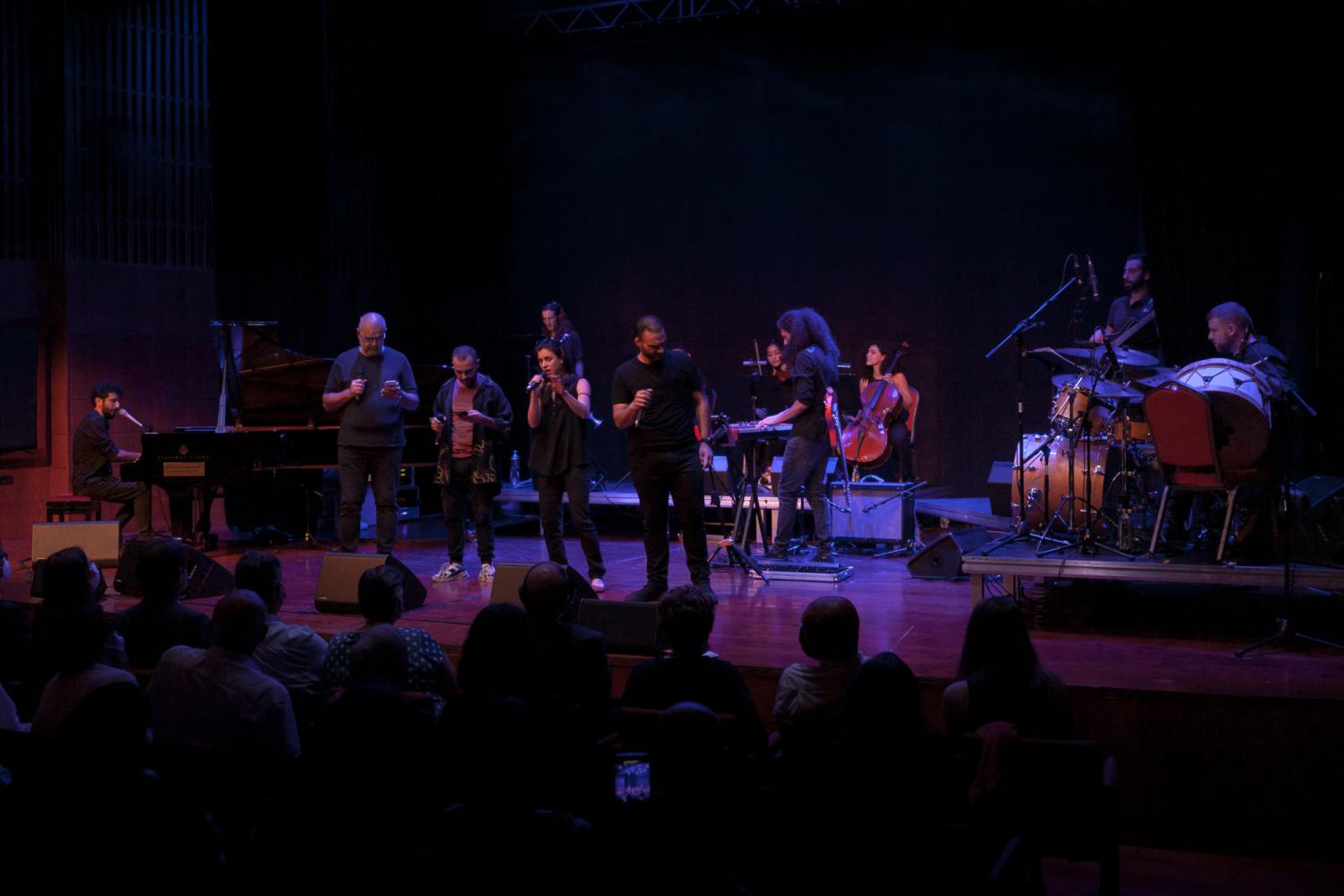 The next day, the program hosted Laith al-Husseini (aka “Synpatik”), a Jordanian Palestinian doctor-turned-rapper who has become one of the leading lights of the region’s underground hip-hop scene. 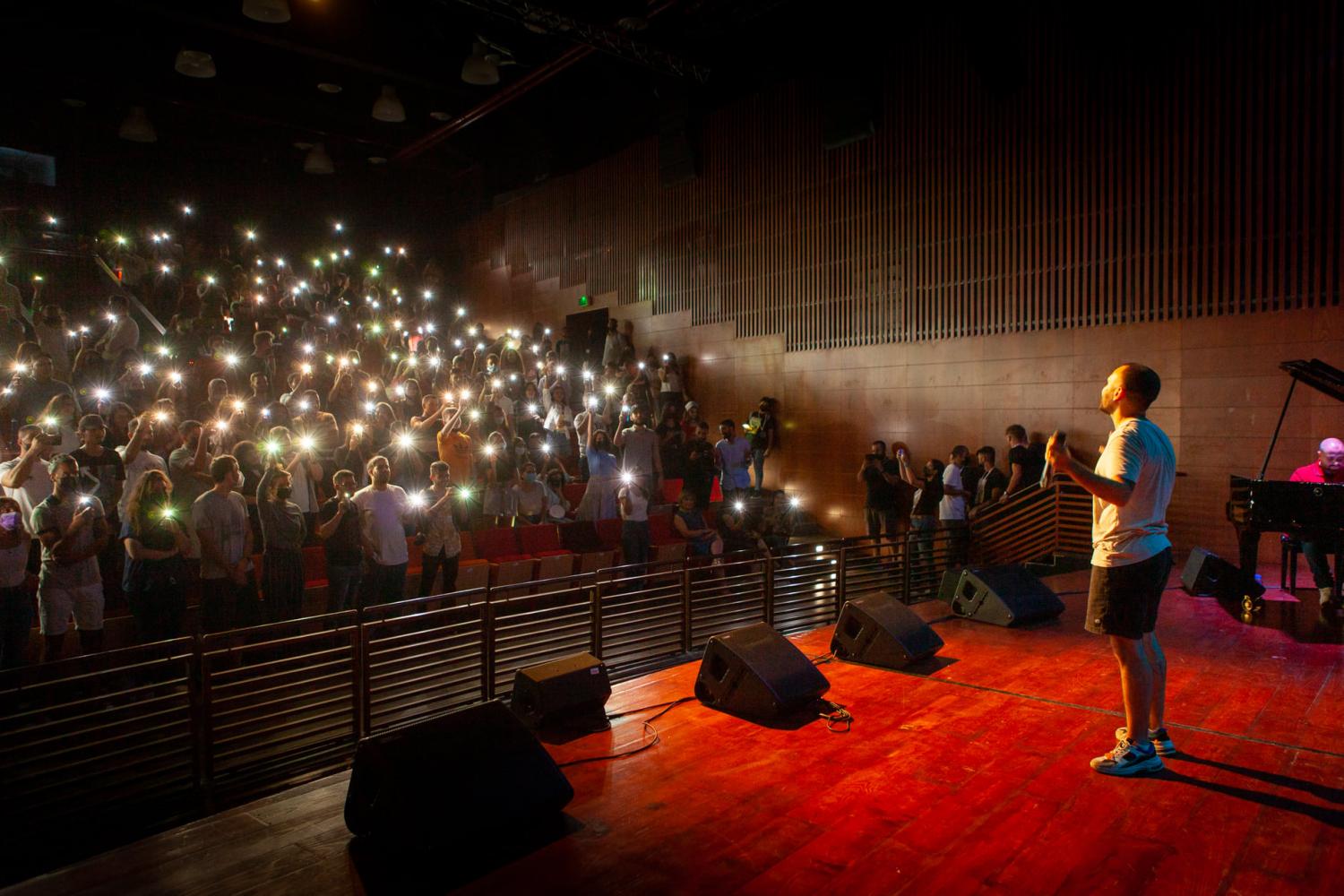 Laith al-Husseini, aka “Synaptik,” performs at the Jerusalem Festival, August 9, 2021.

The four days that followed, from August 10 to 13, featured musical productions from Jerusalem. Two of these were led by Suhail Khoury, music composer and general director of the Edward Said National Conservatory of Music (newly renamed The Jerusalem Society for Music teaching and Research).

One ensemble, al-Mathhabjiyya (The Gilded), specializes in muwashshahat (a genre of classical Arabic music).

The other, Banat al-Quds (Daughters of Jerusalem), is a young women’s choir and ensemble specializing in traditional Arabic music as well as more recent compositions.

The Jerusalem Society for Music Teaching and Research

A national music institute that promotes culture through orchestras and ensembles, annual concerts, and instruction in musical instruments

Al-Mathhabjiyya (The Gilded) performs at the Jerusalem Festival, August 10, 2021.

Siraj Choir and Bayat Choir gave impressive performances and were led by the maestro Samer Bishara, who teaches music and qanun at the Jerusalem Society.

The festival showcased the musical talents of the local youth, to the delight of the mostly Jerusalem audience.

Throughout the festival, the work of Ala al-Baba, a Palestinian artist from al-Am‘ari refugee camp, was displayed for the audience under the series title “The Camp.”

In his paintings, al-Baba uses acrylic on canvas, depicting the refugee camp as if from a visual aerial view, with the intent to give architecture a different insight: The paintings use both imagination and ambition to give viewers an insider’s perception of life in al-Am‘ari camp in Ramallah.

All in all, the festival gave Palestinian Jerusalemites a commemorative occasion to come together and celebrate their musical heritage. 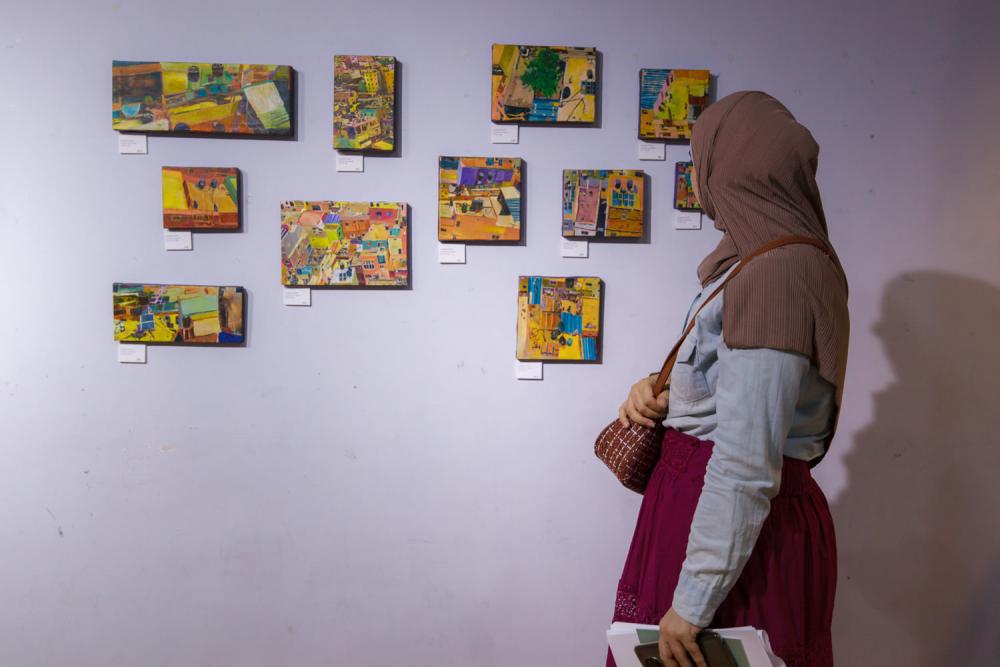 Art exhibition “The Camp,” by Ala al-Baba at the Jerusalem Festival, August 8, 2021

In its message for the Palestinians of Jerusalem, Yabous drew on Article 27 of the Universal Declaration of Human Rights: “Everyone has the right to freely participate in the cultural life of the community, to enjoy the arts, and to share in scientific advancement and its benefits.”

Blog Post Book Review: Jerusalem as It Was and What It Could Be Again

Jerusalem was once a vibrant regional hub with a dynamic civil society, but its natural evolution was abruptly halted by the cataclysm of 1948.