Kamal Boullata (b. 1942 in Jerusalem) was a prolific artist and art historian who was a renowned master of abstract art and Arabic calligraphy. Educated in Jerusalem, he had the misfortune to be abroad when the war broke out in 1967 and spent the rest of his life trying to recapture Jerusalem through his work.

Kamal Boullata was born in Jerusalem in 1942 to Burbara Ibrahim Atalla and Yusuf Isa Boullata. He was the youngest of six children and was raised in the Christian Quarter of the Old City. In an exhibit catalog produced by the Khalid Shoman Foundation later in his life, Boullata recalled:

From the vaulted roof of our home within the walled city, one had a splendid view of domes and cupolas, belfries and minarets. The closest and most majestic dome in our neighborhood was that of the Basilica of the Holy Sepulcher with its adjacent rotunda of the Anastasis Chapel, which we used to call in Arabic “Nus iddiniya” meaning “the nave of the world.” The farthest in the distance was the tower of the Ascension Church nestled on the Mount of Olives. In between the two sites, stood the exquisite Dome of the Rock.1

Six years after his birth, Jerusalem was divided in the 1948 War, and Jordan assumed control of the Old City until 1967, when it was occupied by Israel.

Boullata’s parents noticed that their youngest child had artistic talent, but with no formal art schools in Jerusalem, they sent him to apprentice in the workshop of Khalil Halaby, the renowned Palestinian Jerusalemite artist (and according to Boullata, one of the last icon painters in the Old City) during summer vacations. There, he learned icon painting from a master craftsman, and he moved on to create watercolor paintings of landscapes and street scenes, which he sold to tourists and at exhibitions.

In an interview later in his life with the Jordanian institute Darat al-Funun, quoted in its archive, Boullata recalled “sitting for hours on end as a small boy in front of the Dome of the Rock, engrossed in sketching its innumerable and unfathomable geometric patterns and calligraphic engravings. Those patterns he saw as a child still echo endlessly throughout his adult work. ‘I keep reminding myself that Jerusalem is not behind me, it is constantly ahead of me.’”2

A year after graduating from St. George’s School in Jerusalem, he had saved enough from the sale of his paintings to travel to Italy and study in Rome’s Accademia di Belli Arti from 1961 to 1965.

In June 1967, Boullata was in Beirut for an art exhibit when war broke out. Following its occupation of East Jerusalem, Israel forbade Palestinians from returning to Palestine, and so Boullata was denied permission to return to the city in which his family roots extend 600 years.

Between 1968 and 1971, he studied at the Corcoran School of Art in Washington, DC. Except for one year in 1974 during which he helped establish the children’s book publishing house Dar al-Fata al-Arabi, in Beirut, Boullata remained in Washington until 1992.

Through his art, Boullata always searched for a way back to Jerusalem. Anita Vitullo, an editor who worked with Boullata and followed his work over the years, observed: “his color choices, slants of light, the insistent calligraphy, the drama and delicacy of his work, were his attempts to impart the beauty and pain of Jerusalem. . . . Kamal was always reaching back in time, and forward into the future, to retrieve the city as his once again.”3

“I keep reminding myself that Jerusalem is not behind me, it is constantly ahead of me.”

Boullata was a well-known figure in the Arab American community, as well as in the progressive cultural and political scene in Washington, DC. He designed journal, magazine, and organizational logos as well as informational materials and calendars commemorating important dates in Palestinian history. Researchers who worked with him in Washington remember him as a perfectionist who challenged them to always think about the context in which facts were presented.

In 1981, he cofounded the Arab American Cultural Foundation and, later, Alif Gallery, with the mission of promoting contemporary art and culture from the Arab world. For the 10 years of its existence, Boullata was the driving force behind the gallery and served as its program director. Lama Dajani directed the gallery and worked closely with Boullata. She recalls: “He was brilliant in conceiving multidisciplinary programs integrating the arts and humanities. He was very well informed of contemporary Arab art and culture and was very well connected with leading artists, writers, musicians and performing artists.”4

He promoted artists and writers not only through the gallery, but in print as well. Boullata was “a maker of remarkable books both for his own writing and, most generously, revealing the work of others such as the pioneering collection in 1978, Women of the Fertile Crescent: An Anthology of Modern Arab Poetry by Women.”5 In 1990, Boullata authored Faithful Witnesses: Palestinian Children Recreate Their World, which featured drawings and watercolors depicting how children saw Israel’s military occupation.

Boullata continued to publish throughout his life. In an interview with Art Dubai, he observed that, “For me, writing is like a way to go home.”6

During his years in the United States, Boullata created silkscreens on which he incorporated Arabic letters into geometric shapes. As Elisabeth Siegel remarks, Boullata “transformed angular Kufic designs into colorful geometries that tesselate across his silkscreens and canvasses. His art is suffused with influences from traditional Palestinian embroidery patterns and elements of Western geometric modernism.” She elaborates that “his artworks often abstracted the letter and offered lettering—regardless of its legibility—as itself a work of art.”7 His calligraphic work is described as “a crucial part of the Middle Eastern Hurufiyya movement of the 1970s and 1980s.”8

His works demonstrated a focus on expressing light “through the use of cooler hues, like yellows and blues. Other times he created the sense of light by mobilizing thin lines of red or purple around the edge of softer fields of color, activating the borders through the dynamic color relationships.” Boullata remarked that the light he strived to depict in his paintings “was always the same light he remembered as a child growing up in Jerusalem.”9 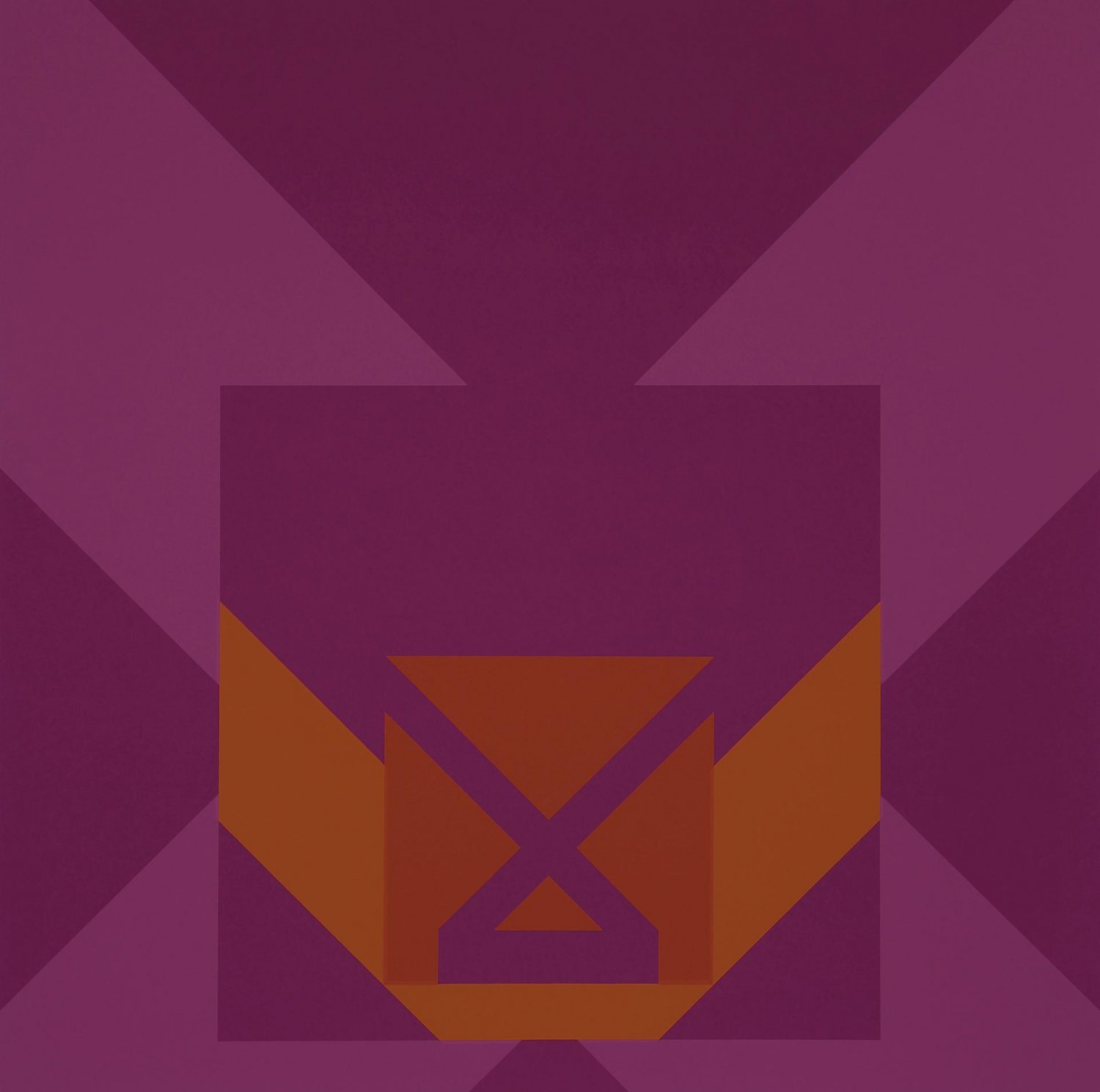 Of Squares and Stars

Boullata described his work as an exploration of the eight-pointed star created by the intersection of two squares at an acute angle. He believed that this shape “formed the master grid for endless patterns.” As Siegel put it, “After 1967, he often used the form of a square, which he ‘dissected’ through ‘lines and thin layers of oppositional colors . . . transform[ing] the surface of the paper into a prism refracting colour and light.’”10

His interest in this shape was rooted in the “splendid” view he had from his rooftop of the cupola, belfry, and minaret of three Jerusalem monuments: the Church of the Holy Sepulchre, the Ascension Church, and the Dome of the Rock. He remarked that they had “an identical building plan” that was based on the rotation of two squares within a circle and intersecting at the same angle.11

That star would lead him to Morocco and Andalusia in 1993 to study Islamic art on a Fulbright scholarship. One of the products of that study was the Granada Portfolio (1996), a set of 12 abstract screen prints that offered “an artistic response to the famed Alhambra palace and its reflecting pools. Interlaced geometric shapes, they create diamonds of colour that conjure the impression of shimmering reflections on water.”12

His work would later be described as “driven by point and counterpoint, and by dialectical oppositions.” The notion of oppositional binaries in his work reflected the “tension between belonging and exile,” which is the most consistent motif in Boullata’s art. Jerusalem, to be sure, was always the departure point for his creative output.13

Additional works by Boullata, including all 12 paintings in the Surrat al-Ard (Navel of the Earth) series, can be viewed in the Khalid Shoman online collection here.

Boullata and his wife, Lily Farhoud, moved from Morocco to France in 1997 and then, in 2012, to Berlin. There he was elected Fellow of the Wissenschaftskolleg zu Berlin at the Institute for Advanced Study. Today, his work is part of private and public collections in the British Museum in London, the Institut du Monde Arabe in Paris, and the New York Public Library.

“Kamal was always reaching back in time, and forward into the future, to retrieve the city as his once again.”

In 2009, Saqi Books published Boullata’s Palestinian Art: From 1850 to the Present, an authoritative and comprehensive insider’s account of Palestinian art production over the past 155 years. Meticulously researched, the book is the culmination of decades of research, as Boullata states in the introduction. The task was all the more challenging because a linear or temporal description was not possible when artists are scattered, some living under Israeli occupation and others in the diaspora.

The publisher described the book’s scope as follows:

This scholarly analysis presents insights into the development of Palestinian art before and after the cataclysmic events of 1948 during which Palestinian society was uprooted and dispersed.

Palestinian Art includes the pioneering work of those who ventured into easel painting before 1948, of refugees who made their debut in the Arab world and whose art left its deep imprint on the development of modern Arab art, and more recent work by artists making inroads into the international art scene.

Boullata also discusses the work of artists who continued to live in their homeland. Representations of home and exile, the ongoing struggle between innovation and tradition, the relationship between verbal and visual expression and the role of women artists in Palestinian modernism are key areas of focus in this work.14

Death and Posthumous Return to Jerusalem

Boullata suddenly passed away in Berlin on August 6, 2019. It took almost two weeks for the family’s lawyer to get permission from the Israeli authorities to repatriate the body to Jerusalem for burial.

Salim Tamari observed that the “militantly secular” Boullata, who had been “mesmerized by religious motifs, and by Sufi spiritualism and Islamic calligraphy,” was buried in the Orthodox cemetery on Mt. Zion, on a site described by one priest as “the holy of holies” (and coincidentally next to George Antonius, author of The Arab Awakening).15

About one thousand friends, relatives, diplomats, and others attended the memorial service for this son of Jerusalem, who would finally and permanently remain in Jerusalem. It was a fitting resting place for an exile who described himself as trying to capture the light of Jerusalem in his work.

An Al Jazeera video report about Boullata’s moving funeral and burial in Jerusalem can be viewed here.

Boullata left projects in various stages of completion. His wife and longtime collaborator, Lily Farhoud, herself an art scholar, saw them through: the “Jerusalem in Exile” exhibition in Jesus College, Cambridge (February–March 2020); the “Geometries of Light” exhibition in Galerie Pankow, the first institutional show of his work in Berlin (September 30–November 7, 2021); and There Where You Are Not: Selected Writings of Kamal Boullata, a collection of 45 of Boullata’s essays. A tribute to his art was published a few months after his death in Uninterrupted Fugue: Art by Kamal Boullata.16

(co-edited with Mirène Ghossein) The World of Rashid Husain: A Palestinian Poet in Exile. Detroit: Association of Arab-American University Graduates, 1979.

Editor. “A Tribute to Kamal Boullata the Writer of Images.” Artmejo.

Tamari, Steve. “There Where You Are Not: Selected Writings of Kamal Boullata, and Dogramaci, Uninterrupted Fugue: Art by Kamal Boullata” (book review). Journal of Palestine Studies 50, no. 3 (2021): 69–72.

Steve Tamari, “There Where You Are Not: Selected Writings of Kamal Boullata, and Dogramaci, Uninterrupted Fugue: Art by Kamal Boullata” (book review), Journal of Palestine Studies 50, no. 3 (2021): 69–70.

An artist, curator, and cultural institution builder who believes that Jerusalem is more than a symbol of holiness

We review the book Feast of Ashes, by Sato Moughalian, which chronicles the origins of the Armenian ceramic tradition in Jerusalem, first introduced there by the author’s grandfather, a refugee from the Armenian genocide.