Struggling to Survive in the Khirbet Khamis Enclave

Fouad Jado, a resident of the Jerusalem village of Khirbet Khamis, describes the absurd, dystopian conditions under which he and his family have to struggle to survive.

Fouad Jado, 63, is a Jerusalemite residing in Khirbet Khamis, a tiny village in southern Jerusalem, beyond the Separation Wall. In 1967, Khirbet Khamis was one of the 28 Palestinian villages absorbed into the city by the state’s unilateral expansion of the municipal boundaries1 (see What Is Jerusalem?). However, for reasons that remain unknown, the state granted its residents West Bank IDs (today Palestinian Authority IDs), not Israeli IDs, meaning that they do not have legal status inside Israel.

The state considered these holders of West Bank IDs to be living “illegally” in their own homes. In Jado’s case, this is even more egregious insofar as he was originally from West Jerusalem and was expelled in 1948 to this area. 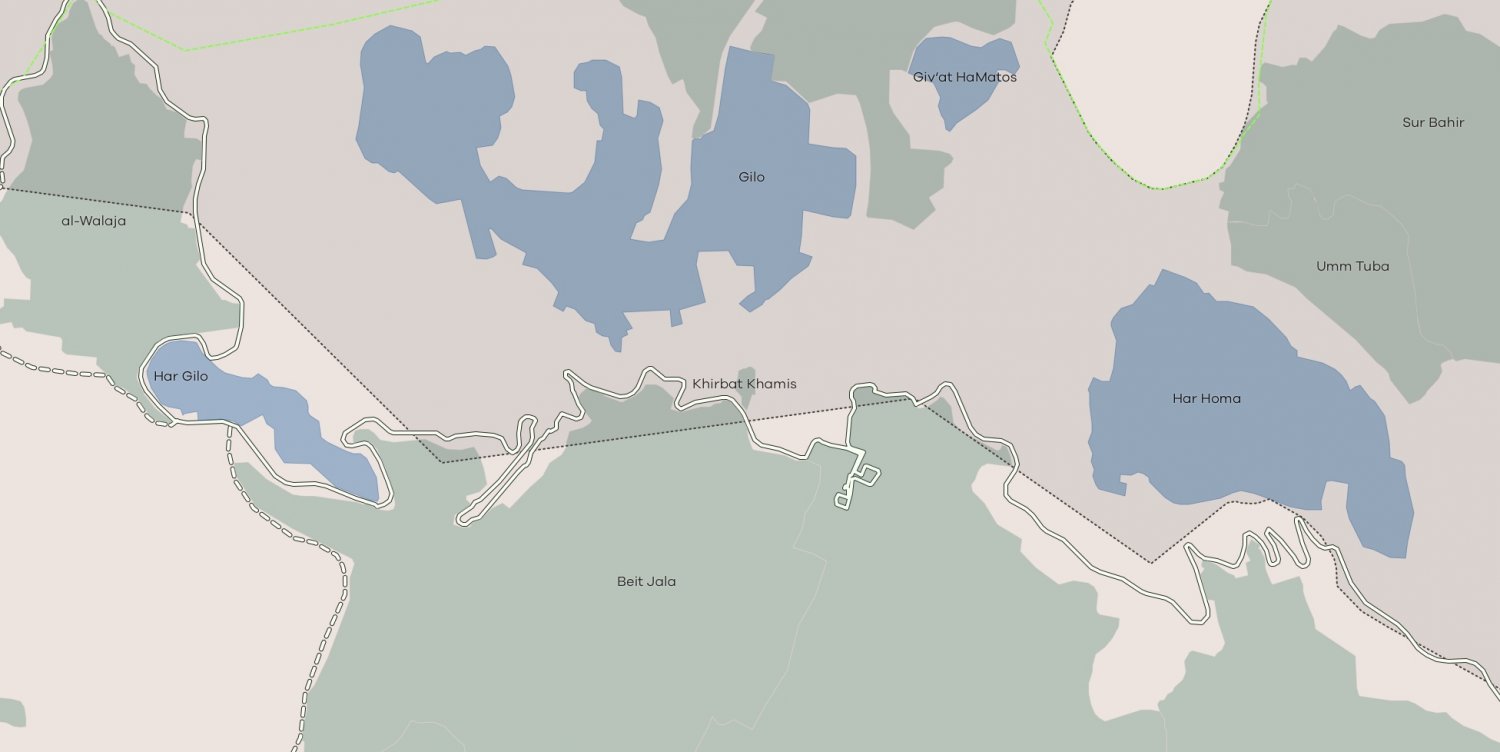 The location of Khirbet Khamis relative to the Separation Wall (white), the Jerusalem municipal boundary (dotted black), and nearby Palestinian localities (green) and Jewish settlements (blue). For a more comprehensive view, see The Separation Wall in and around Jerusalem.

The state considered these holders of West Bank IDs to be living “illegally” in their own homes.

Nonetheless, until 1993, residents of Khirbet Khamis could access nearby Bethlehem and Jerusalem easily. However, in 1993, a closure regime was imposed, meaning that anyone holding a West Bank ID needed a permit to enter Jerusalem (see Jerusalem: A Closed City). As well, Checkpoint 300 (controlling access between Jerusalem and Bethlehem) was installed, separating the village from Bethlehem. The checkpoint became the villagers’ only entry into Bethlehem, which in turn is the only place they are allowed to go for sustenance, healthcare, and education.

Some years later, the wall was built, surrounding and enclaving the village entirely.

Life in Khirbet Khamis is devastating for its residents. They need permits to move almost anywhere, even between their homes and their sole checkpoint to access food sources; their village has become an open-air prison, cut off from essentials like emergency services.

The state requires the villagers to apply for permits to go food shopping. 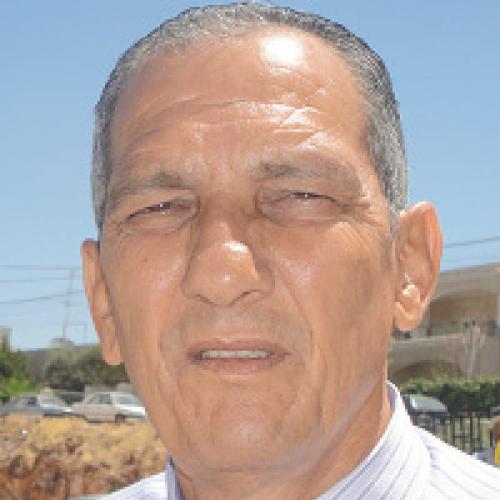 The United Nations Office for the Coordination of Humanitarian Affairs 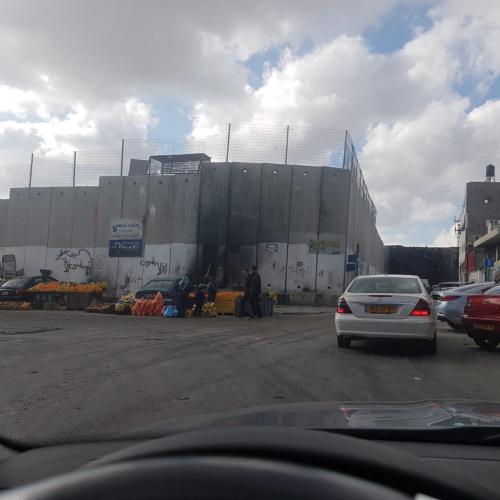 The checkpoint to Bethlehem

“Before the wall, life was easy and comfortable. Until 2001, this was an open area. In 2001 its closure began with the construction of the wall after Israel’s invasion of Bethlehem.2 It separated us from Bethlehem and from Jerusalem. We became surrounded by the wall and disconnected from any other locality.

“We are originally from the village of Malha in West Jerusalem. We were expelled in 1948 to this area. We hold identity papers from the Palestinian Authority.

“When the wall surrounded us, it became impossible for us to move in and out. Later, I had to ask for help from the Association for Citizen Rights in Israel (ACRI) and the Red Cross.

“In 2006, we went to the Israeli Supreme Court to obtain a special permit to get permission to cross the checkpoint, Checkpoint 300, to go in and out of Bethlehem.

Impact of the Wall on Daily Life

“Our area is small, with few houses and around 200 residents. We don’t have a commercial center, so people have to do their shopping in Bethlehem. If I want to shop in Bethlehem, I used to be allowed to bring in quantities that are sufficient for my own use only. But after 2019, it became forbidden to bring in food from the West Bank since it is considered ‘import.’

“But it depends on the mood of the soldier. Sometimes you are allowed to bring in foods; other times, they just throw it in the trash right in front of my eyes. Every time I have to explain that I have a special permit that allows me to buy eggs and meat and cross the checkpoint with it. But this is never sufficient. The soldier needs to get confirmation. If they make the necessary call to their superior and get approval, then I am allowed to pass with the food. If they don’t make the call, then I am not allowed to bring the food with me. This takes about an hour and a half. Many times it is in vain; after all this waiting, the soldiers just throw away the food.

“I also cannot bring gas for heating and cooking through the checkpoint, so I have to get it from Jerusalem. I have to call the gas company to deliver a gas cylinder to my house, which ends up costing twice as much as any other Jerusalem resident pays, all due to the closure and the area where I live.

“Many times, the soldiers at the checkpoint just throw away my food.”

Impact of the Wall on Health and Healthcare

“In terms of health services, in 2004, I needed to seek medical care due to a heart condition, but in Bethlehem, they didn’t have the capacity to perform open heart surgery. So, after the intervention of international organizations that requested a special permit for me to go to hospital, I was allowed to go to Makassed Hospital in al-Tur in East Jerusalem to get the operation done.

“In 2005, my mother had a severe heart attack at home. I called the Red Cross to send us an ambulance. They said that this required security coordination with the Israeli authorities and that it would take a lot of time. We didn’t have time. So I called the Israeli ambulance service Magen David Adom, which is supposedly an independent health organization. They argued that we live in a border area, that it’s a dangerous warzone, and that they cannot come without prior security coordination. In the end, I had to drive my mother in my car in search of any opening in the wall. I finally found a way to smuggle her across, but she died in the car on the way to the hospital.

Jado was trying to smuggle his mother across the wall to the hospital, but she died in his car on the way.

“Currently, if we need an ambulance, it’s expensive to request one from the Israeli hospitals since I am not insured there or in the West Bank. Because I cannot work in Palestine, I applied for special health insurance from the Palestinian Authority. They sent me to the al-‘Izariyya/Abu Dis area, which is very far from here, about an hour’s drive. Nonetheless, I went there and requested insurance to cover my treatment in Makassed Hospital, and that was impossible as well. They only give special permits in special cases, and I didn’t qualify. So now I don’t have health insurance.

Impact of the Wall on Education

“My kids go to school in Bethlehem. There are no schools nearer to home. To get to school, they have wake up at 5:30 a.m. and leave by 6:30 a.m. to walk a kilometer on a dirt road in a valley, which is dangerous because in winter it floods. From there, they cross Checkpoint 300. After that, a driver in a private car drives them to school. The whole journey takes about an hour, but on their way back from school, there are a lot of other people waiting to cross the checkpoint, so they wait even longer at the checkpoint to arrive home.

“The Ministry of Defense refused to allow our children to go to school in Beit Safafa.”

“In court, we appealed for a permit for the kids to allow them to study in the nearby village of Beit Safafa, which falls within the Jerusalem municipal boundaries, and also a permit that allows us to practice our religion, and to receive healthcare and education. This solution was proposed by the judge himself, but the Ministry of Defense refused. They granted us a permit only to pray in the nearby mosque in Beit Safafa. The kids were not allowed to go to school in Beit Safafa.

Outlook for the Future

“Our lives have become very hard since the wall was built, and in every sense—socially and economically, and in terms of health and education. I cannot get a stable job. My permit does not allow me to work inside Israel. In the West Bank, there is a high rate of unemployment; many educated young people cannot find jobs.

“My family has 26 people. Together with our neighbors, we are 130 people in Khirbet Khamis. Our village used to belong to the Bethlehem governorate, but once the wall was built and it was left on the Jerusalem side, it became de facto part of the Jerusalem municipality, and now we are obliged to pay Israeli taxes, and water and electricity bills. But we don’t receive any services, or even the possibility to visit Jerusalem, or permits to build, or to even add a room to our houses. So basically, although we own the land, which falls within the Jerusalem municipality, we, the land’s inhabitants, are not considered Jerusalem residents.

“I don’t have prospects. I hope there will be improvements to include us in any future deal to at least have a human life. Israel claims that it’s a democratic state, but at the same time, it represses people and prevents them from having any future.”

“We, the land’s inhabitants, are not considered Jerusalem residents.”

What happens when the state all but decrees that life itself is not permitted? This is the situation that Palestinian residents of al-Nabi Samwil find themselves in.

Personal Story Denied Status Despite Repeated Attempts, a Mother of Five Lives as a Fugitive and a Prisoner in Her Own Home

When she married at 18, Ayah hoped to expand her world. She soon found that her range of motion did not extend beyond the nearest checkpoint.