For many Palestinian residents of Jerusalem, closure means the permanent closure imposed on Jerusalem is not neatly aligned with the city boundaries, and the city boundaries in any case were unilaterally defined without regard for Palestinian neighborhoods. Palestinians with permanent residency who live in city neighborhoods that are beyond the Separation Wall, outside the checkpoints but still within the Israeli municipal boundary, have to endure daily commutes that are so prolonged and frustrating that eventually it can become intolerable. The Jerusalem Story Team spoke with Diya’ by phone on January 20, 2020, to learn more.

Diya’,1 45, has lived all his life in the Kufr ‘Aqab neighborhood north of Jerusalem. This neighborhood falls within the Israeli municipal boundaries of the city but behind the Separation Wall, so residents who live in it have to traverse the Qalandiya checkpoint to reach the rest of the city, even if they are permanent residents with Israeli-issued IDs like Diya’. Since this is the only entry point available for these neighborhoods to enter the main part of the city, and the checkpoint is used by upwards of 26,000 Palestinians each day (one-third of the movement into Jerusalem from the entire West Bank),2 traffic jams and delays are intense. Diya’ teaches math in an East Jerusalem school near the Old City.

Before the establishment of the Qalandiya checkpoint and the construction of the Separation Wall, Diya’ shared that it used to take him no more than 20 minutes to get to work every morning. After that, he had to wake up at 5:30 a.m. and drive to the Qalandiya checkpoint where he waited in his car on a very long, crawling line to undergo a security check and cross. This was the only way he could get to school on time by 7 a.m. 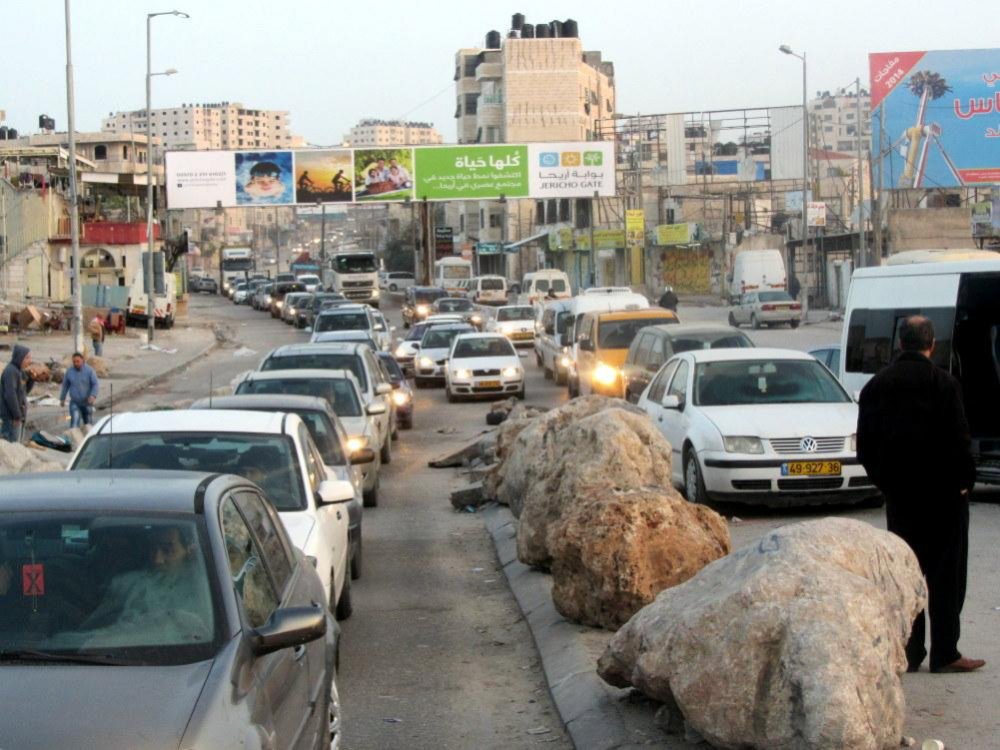 Long lines of cars wait at Qalandiya checkpoint on March 19, 2014.

After a while, it was exhausting for Diya’ to wake up that early every day, and even worse when the authorities would arbitrarily decide to close the checkpoint (not an uncommon occurrence), or traffic was backed up in the area, or the daily security check took too much time.

Therefore, in 2007, Diya’ decided to rent a small apartment in Shu‘fat neighborhood, north of East Jerusalem, which due to its location on the Jerusalem side of the Separation Wall meant that he would no longer need to cross a checkpoint or a wall to get to work every day. This has been stressful financially, but he has managed to make it work, and Diya’ thinks it is better to spend money on rent than lose his mental health while waiting in long lines to get checked every morning by Israeli military police.

For many Palestinians from East Jerusalem, the construction of the wall around Jerusalem, separating it from its northern and some of its eastern neighborhoods like Shu‘fat refugee camp and Kufr ‘Aqab (which are two Palestinian neighborhoods that lie within the municipal borders of Jerusalem but on the “other” side of the Separation Wall) and also severing its connection with the cities of the West Bank, has meant that they have to go through a long system of closure and checkpoints for their morning commute. It has affected their job choices.

In my case, I could manage to pay more money to rent a second house and keep my job, but others might not be able to, which means they either have to bear the waiting on the checkpoint or quit their jobs and look elsewhere for another job that does not involve passing through checkpoints, like one in Ramallah, for example.

The story of Diya’ is just one of many, of Palestinians who have to make enormous sacrifices and changes to their entire life circumstances just to achieve what should be a simple, mundane end—such as getting to work on time each morning.

Identifying information has been changed.