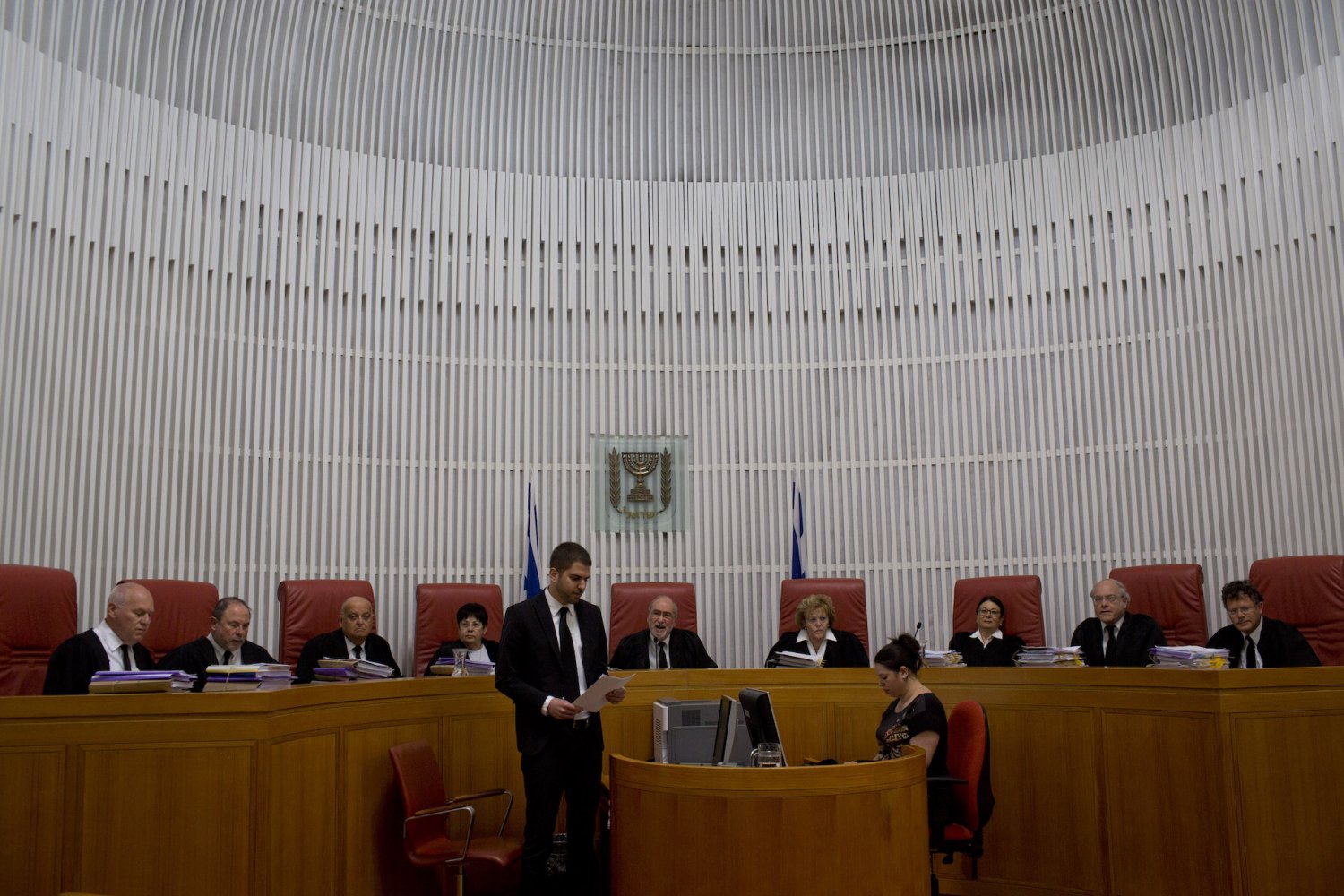 The Case of Akram Abd al-Haq: When the Court Surprisingly Ruled That Palestinian Jerusalemites Are “Native Residents”

Akram Abd al-Haq, born in Jerusalem on May 8, 1959, when it was part of Jordan, was taken abroad by his parents as a minor. Later as an adult, he wished to rejoin his parents, who had returned to their city, at this point under Israel occupation, about a decade later. But the state denied his wish for decades, insisting that his residency had been revoked by virtue of his relocating outside the country. Undeterred, Abd al-Haq spent copious amounts of time in the city, marrying there, having 10 children, and filing numerous legal appeals to win the right to remain legally. Eventually, after a 30-year legal battle, the Israeli Supreme Court ruled that his residency should be reinstated as on balance, it was clear that his “center of life” was Jerusalem. But they went farther than that, also ruling that Palestinian Jerusalemites are “native residents,” thereby establishing an important legal precedent.

Akram Abd al-Haq was born in Jerusalem in 1959. His family lived in Beit Hanina, a Palestinian neighborhood on the road to Ramallah that in 1948 remained in the area that Jordan annexed, but in June 1967 was occupied by Israel. At the time, Israel unilaterally drew the municipal boundaries of the newly expanded city such that Beit Hanina was arbitrarily divided: parts of it were enfolded into the city, and parts were left outside (i.e., in the remainder of the occupied West Bank). This had implications for families, as only persons living inside the municipal boundaries would be counted in the 1967 census and therefore eligible to receive Israeli permanent status; anyone in the “other” side of Beit Hanina would be compelled to carry West Bank IDs (which later became Palestinian Authority (PA) IDs in the 1990s, after the Oslo Accords were signed).

Abd al-Haq and his parents were counted in the census, which meant he qualified to receive Israeli permanent-resident status. In 1970, aged about 10, he moved with his parents, who are US citizens, to the US. At that time, he was registered on his parents’ IDs, which would have qualified him for his own ID at age 16, but he moved away before coming of age and so never applied for nor received one.

On April 23, 1974, at age 15, he obtained US citizenship through his parents. He completed high school, college, and graduate school in the US. His departure from the country and his acquisition of US citizenship caused the state to revoke his Israeli permanent-resident status (see Precarious Status).

From time to time, he would return to the country to visit on his US passport. On one of those visits, he met and married his first wife, who was an indigenous Palestinian Jerusalemite from Beit Hanina and held a West Bank ID by virtue of the fact that she lived in the part of Beit Hanina that was “excluded” from the municipality when the boundaries were unilaterally imposed in 1967. In June 1986, he married her and went on to have seven children with her. The court records indicate that she and the children lived in Beit Hanina and never left the area, and that the children are registered under her West Bank ID, which means they could obtain PA IDs when they turned 16.

Courtesy of the Abd al-Haq family

Wishing to live with a legal status with his wife, children, and parents (who moved back to the city in the 1980s and retained their valid permanent-resident status), Abd al-Haq attempted to regain his status for the first time in 1989, while he was in Jerusalem on a visit. He hired a lawyer to send a letter to the Ministry of Interior requesting a returning resident visa, which is temporary. The ministry denied the request on the grounds that Abd al-Haq had left the country before obtaining his permanent-status ID. (By law, Palestinian Jerusalemites can obtain IDs upon turning 16 and must do so by age 18. He was living in the US at the time and did not do so. He would later argue that he was a minor when his parents made the decision for him to move him to the US and acquire US citizenship, and he had no agency in the matter.)

In the summer of 1994, Abd al-Haq again requested that the ministry grant him permanent residency; the ministry dismissed his request without explanation a few months later.

In 2001, Abd al-Haq married another Palestinian woman, his second wife, from the West Bank and had three children with her; the now-expanded family continued living together (with 10 children) in Beit Hanina. The three children of the second wife have West Bank residency through their mother. (Later he would argue that he had separated from his first wife in 2001 but not formally divorced her so as not to stigmatize his daughters.) She and the children never left Beit Hanina and hold PA IDs. Throughout the years, not only was Abd al-Haq denied permanent residency in Jerusalem, but his wives and children have been ordered to leave Jerusalem (i.e., move outside the city boundaries to somewhere in the rest of the occupied West Bank).

Abd al-Haq’s repeated attempts to return permanently to Jerusalem were denied on the grounds that he did not have significant ties to Israel, his residency expired in 1989, and he was married to two women—both from the West Bank—at the same, which is against Israeli law.

Abd al-Haq had made numerous trips to the area since the 1980s. In 2007, he entered the country on a tourist visa and did not leave when it expired, remaining continuously.

On appeal, the ministry argued this was merely a “technical error” and that the residency had, in fact, expired in 1989. Siding with the ministry, the court rejected that appeal.

Abd al-Haq would continue to jump through legal hoops, filing several more appeals, all of which were unsuccessful, until 2014, when he appealed his case to the Israeli Supreme Court, and the justices temporarily stopped the order for him and his family to leave Jerusalem, pending the outcome of the case.

Three years later, in 2017, the Supreme Court overturned the decision not to reinstate Abd al-Haq’s Israeli permanent residency. They ruled that his case should fall not under the Sharansky Affadavit but rather under the broad discretion the minister of interior has to grant residency to persons whose circumstances merit it. Writing the judgment for the court, Justice Vogelman stated:

In my view, the circumstances of the Appellant’s life, which I have addressed above, and all the more so their cumulative weight, in conjunction with the fact that he is a native of East Jerusalem, were not accorded their due weight in the Respondent’s decision to deny the Appellant’s application to have his permit for permanent residency in Israel reinstated, and as such the decision must be revoked.1

The court found that while Abd al-Haq had left the country as a minor, beginning in the 1980s, he had demonstrated clear and continuous evidence of renewing ties to the country. Therefore, the court ruled that Abd al-Haq should be granted a permit for temporary residency (type A/5) which lasts for two years, and then, if he could yet again prove his “center of life” was Jerusalem, he should be granted permanent-resident status.

Table 1 summarizes the case and the factors that weighed heavily towards the decision to rule that Abd al-Haq’s “center of life” was, in fact, Jerusalem.

Table 1: An overview of Abd al-Haq v. the Minister of Interior

In their decision, Justices Uzi Vogelman and Manny Mazuz even took the ruling a step further and claimed that Palestinian Jerusalemites are of “native residency,” thus distinguishing them from the immigrant residents. According to Vogelman:

When the minister is required to consider an application for reinstatement of a permanent residency permit for a resident of East Jerusalem, he must take into account the unique situation of these residents, who, unlike persons who immigrated to Israel and seek status in the country, have strong ties to their place of residence, as persons born there, and, in some cases, whose parents and grandparents were born there as well, and have maintained family and community life there over many years.2

Indeed, with respect to the stage at which Israeli residency status was lost, the case herein is considerably similar to ‘Awad. However, the case herein did not conclude at that stage, as, beginning in the 1980s, the Petitioner renewed his ties to Israel (East Jerusalem). He visited Israel frequently and remained in the country for lengthy periods of time each year. He married a resident of the Area, with whom he resided in Beit Haina in East Jerusalem, and, in fact, beginning in the early 1990s, the Petitioner spent most of the year in Israel, and in a significant number of years—the entire year. Ever since 2008, the Petitioner has remained in Israel permanently and never left the country.3

In these circumstances, the Petitioner should be deemed to have renewed his ties to Israel, and given the special status of East Jerusalem residents as native residents—contrary to persons who acquired the right to permanent residency by permit after having immigrated to Israel—there are sufficient grounds and justification for his application for renewed recognition of his status as a permanent resident according to the route proposed by my colleague [Vogelman] in the final section of his opinion.

This judgment establishes a precedent that Palestinian Jerusalemites who have been told that their residency expired and has been revoked can refer to when seeking to have their residency reinstated. However, President Justice Miriam Naor stated: “It is understood that this [case] should not lead to the conclusion that this shall be the outcome in each and every matter, rather the outcome depends on the facts of the case.”4 Therefore, the “center of life” is still the central principle that determines the residency status of Palestinians within the municipal boundaries of Jerusalem controlled by Israel. Furthermore, the minister of interior continues to have broad powers over such matters.

Abd al-Haq spent nearly 30 years attempting to reinstate his permanent residency status, and his efforts have had a positive impact on Palestinian Jerusalemites who find themselves in a similar predicament. While Abd al-Haq has generally refused to speak publicly, even after the ruling, he did finally obtain legal status and an Israeli permanent-resident ID. However, this case has created opportunities for Palestinian Jerusalemites who have an ID number, but an inactive ID; lived outside the country beginning in childhood; or obtained foreign citizenship as minors.

Possibly the most important aspect of this case is that as a result of it, the Israeli courts formally acknowledged what Palestinians have always known: that Palestinians are indigenous to Jerusalem, and distinct from those who arrived as foreigners and then applied for residency. However, to date, this ruling remains relevant to one case only, and has not changed anything about the legal status of Palestinian Jerusalemites generally.

Load More Load Less
Graphic How Easy Is It to Access Jerusalem? It’s All about the ID

A daunting, labyrinthine maze of regulations and blockage points stands between holders of certain types of IDs and Jerusalem.

Case Study Forcibly Displaced for a Spouse’s Acts: The Case of Nadia Abu Jamal and Her Three Children

The state inflicts devastating punishment on a Palestinian family for the actions of a dead man; the consequences are lifelong and irrevocable, especially for the children.