The Yabous Cultural Centre, dedicated to the development and promotion of art, has successfully wrapped its 26th edition of the Jerusalem Music Festival. This year’s theme was “Stand Up Jerusalem.” The festival was originally set to open on August 12, 2022, but had to be delayed for a month due to “Operation Breaking Dawn,” when hundreds of Israeli airstrikes hit the Gaza Strip in the second week of August, killing at least 49 Palestinians, 17 of whom were children.

In their postponement statement on August 8, 2022, the organizers noted that their original title “Stand Up Jerusalem” would now be modified to include “Stand Up Gaza”—in reference to the tragic events of last August there. 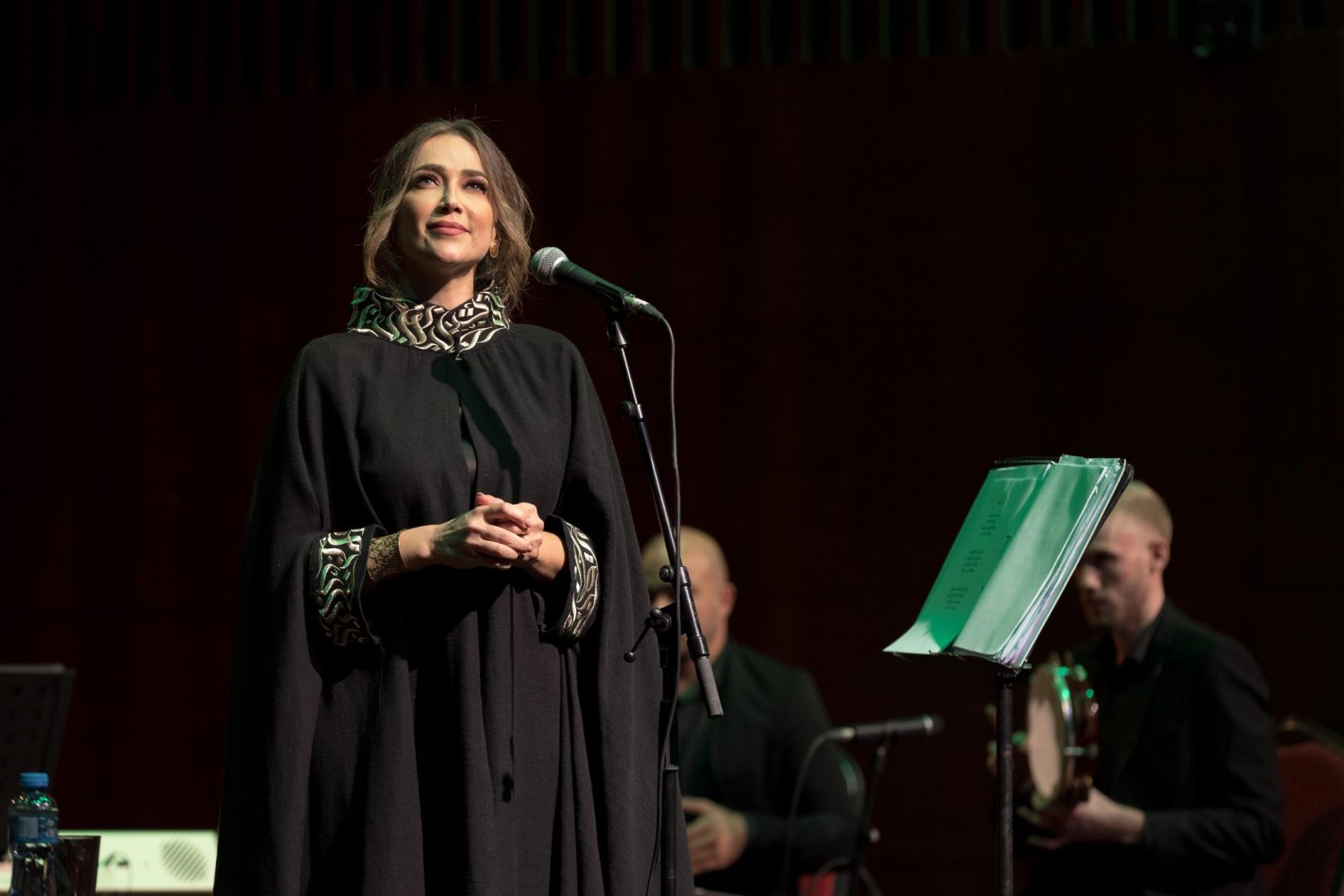 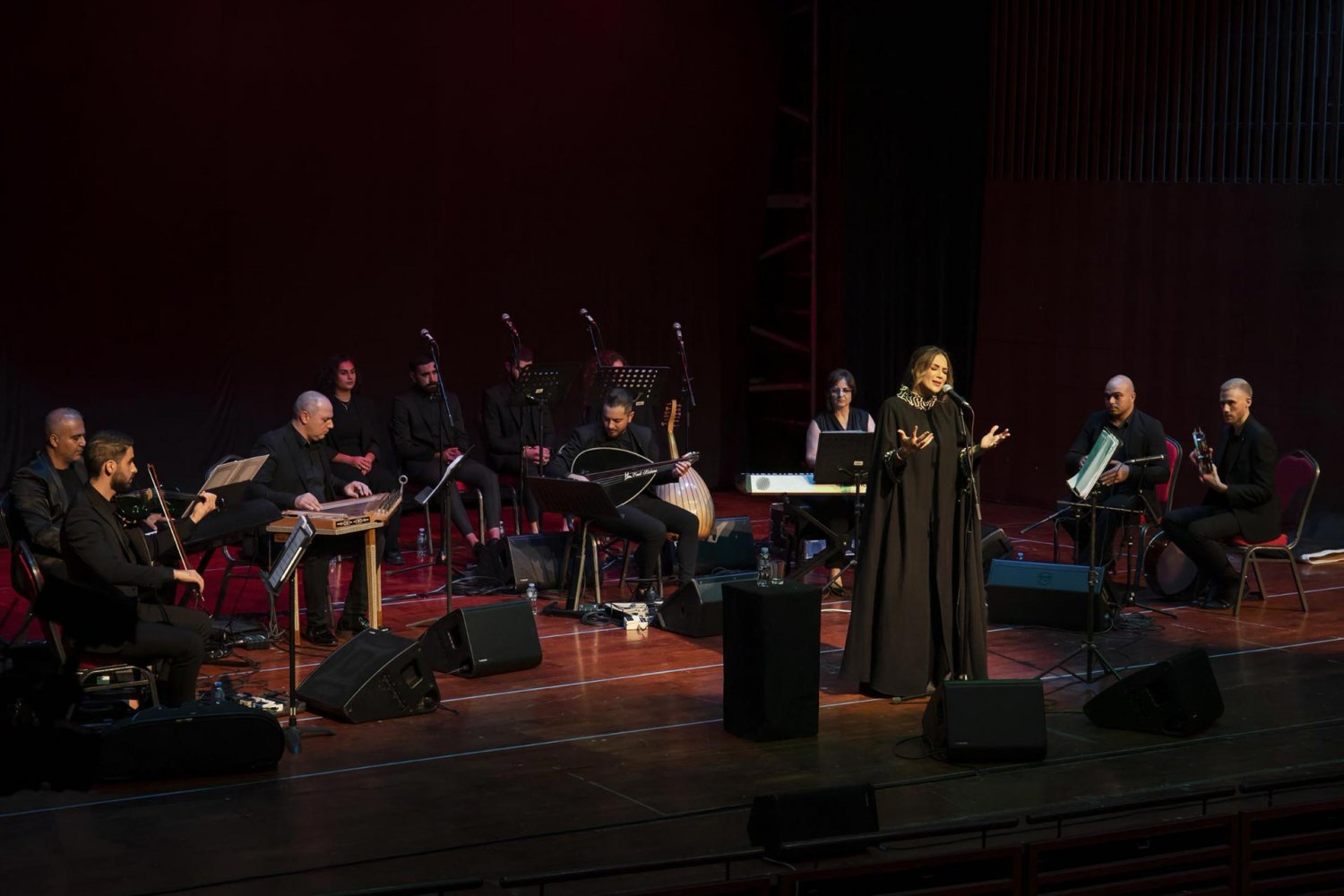 The opening night kicked off with an exquisite performance by Palestinian singer and producer Dalal Abu Amneh. Abu Amneh was accompanied by the Arab Orchestra led by the talented Palestinian oud player and composer Emil Bishara from Nazareth. The passionate young Jerusalemite singer Aida Qunbar also joined for a song during the show.

Abu Amneh opened her concert with a song dedicated to her late father, who recently passed away, as it was one of his favorites—“Sawa Rbina.”

During the show, Abu Amneh would ask the audience for requests and then perform each one on the spot—popular folkloric songs such as “Baktob Ismek ya Bladi,” “Hal Asmar el Lon,” “Nassam ‘Alayna el Hawa,” and “Alrozana.”

The Nazareth-born Abu Amneh has become a much-loved representative of Palestinian folklore, with her warm, melodious voice familiar to all ages. Her videos see Abu Amneh often celebrating Palestinian women from across the country, shedding light on the beauty and heritage of the Palestinian thawb (traditional dress) and folk songs. The singer-producer has also trained people of different ages in music. Abu Amneh specializes in more than one musical genre, including classical Arabic music (tarab) and folk music, as she distinguishes her sound by using different melodic modes (maqamat) and rhythms in Arabic music.

Besides singing publicly, which she started doing from age four, Abu Amneh is also a research doctor in brain sciences and neurophysiology and a mother of two.

During the show, Abu Amneh would ask the audience for requests and then perform each one on the spot. 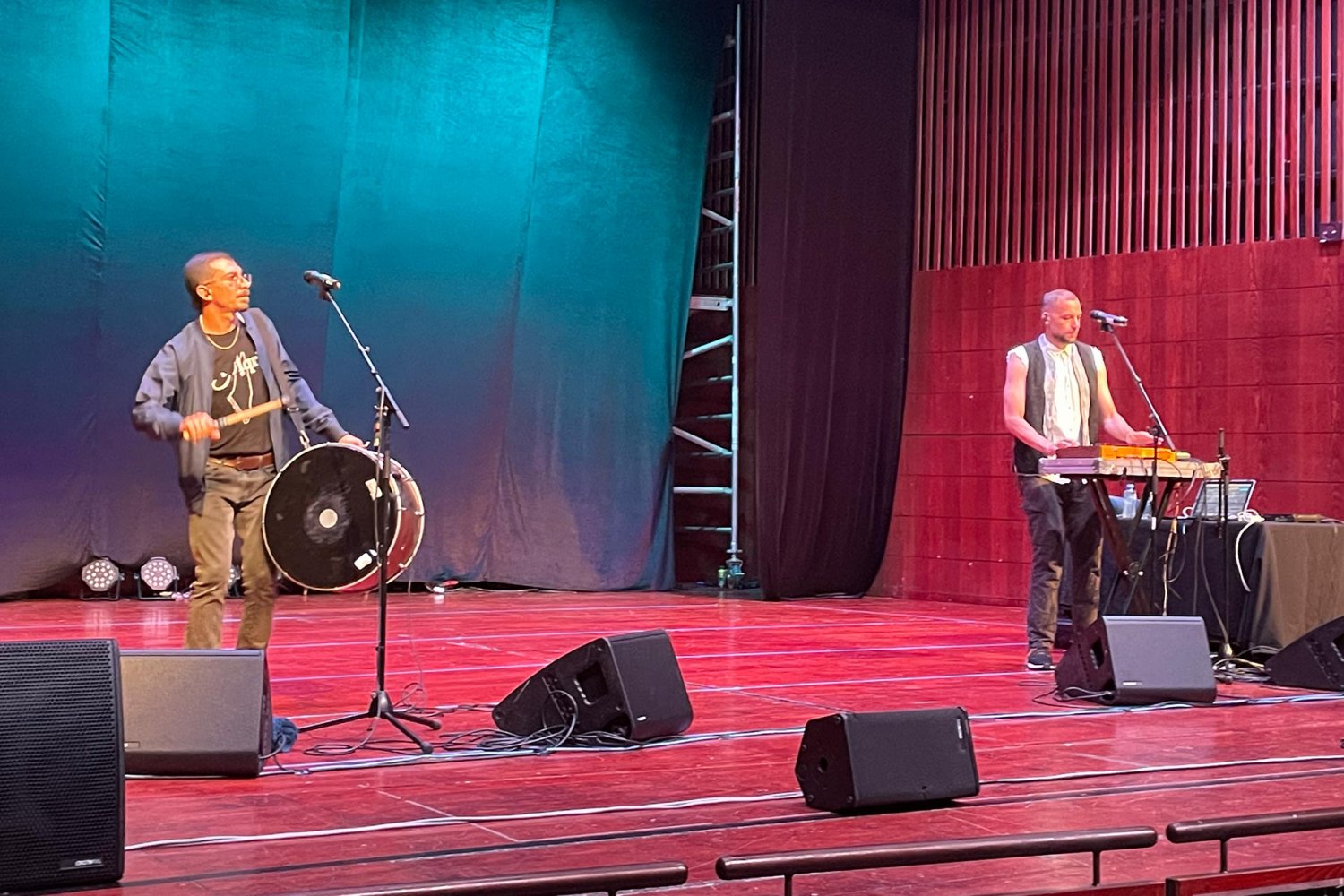 47Soul, another fan-favorite musical act, performed on day 2. Unfortunately, band member Tareq Abu Kwaik (stage name: El Far3i) could not make it to the show from his home country Jordan, as he was not allowed to enter Jerusalem. Fellow band members Ramzy Suleiman and Walaa Sbait still managed to give a roof-raising performance.

This was the first time that the popular band performed in Jerusalem. The crowds cheered when they heard the new song dedicated to Shireen Abu Akleh, and surely at the sounds of dabkeh songs such as “Intro to Shamstep.” 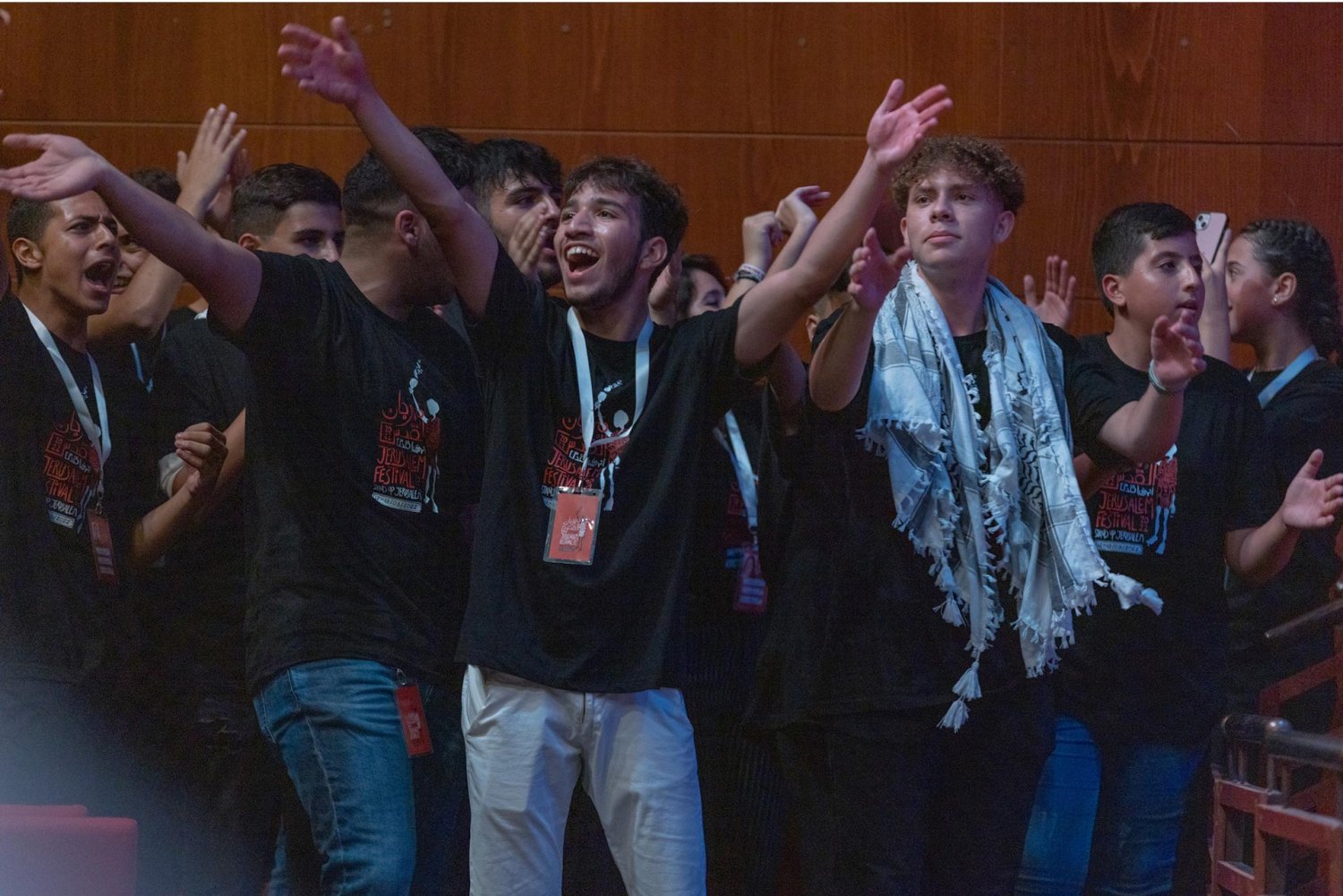 Inspired by the music, ushers at the 47Soul concert jumped into motion.

Tens of young ushers jumped up off their feet in celebration of the upbeat music. The performances of 47Soul are known for drawing large crowds from across the region. With the uniting spirit of Bilad al-Sham (the Levant), the band defies the ideas of borders and invites reclamation of Palestinian culture and life before the 1948 Nakba (hence their name, “soul of 1947”).

While the band members each specialize in their own styles, collectively they have managed to create a unique sound. They stand out for using the mijwiz (a traditional Palestinian musical instrument) mixed with dubstep (electronic music) and dabkeh (Levantine folk dance). 47Soul has been said to have brought back the spirit and power of dabkeh among Palestinian youth. 47Soul has received global recognition, even performing a Tiny Desk Concert for the American National Public Radio (NPR) YouTube channel. “Intro to Shamstep” continues to be a staple song for weddings and cultural performances worldwide. 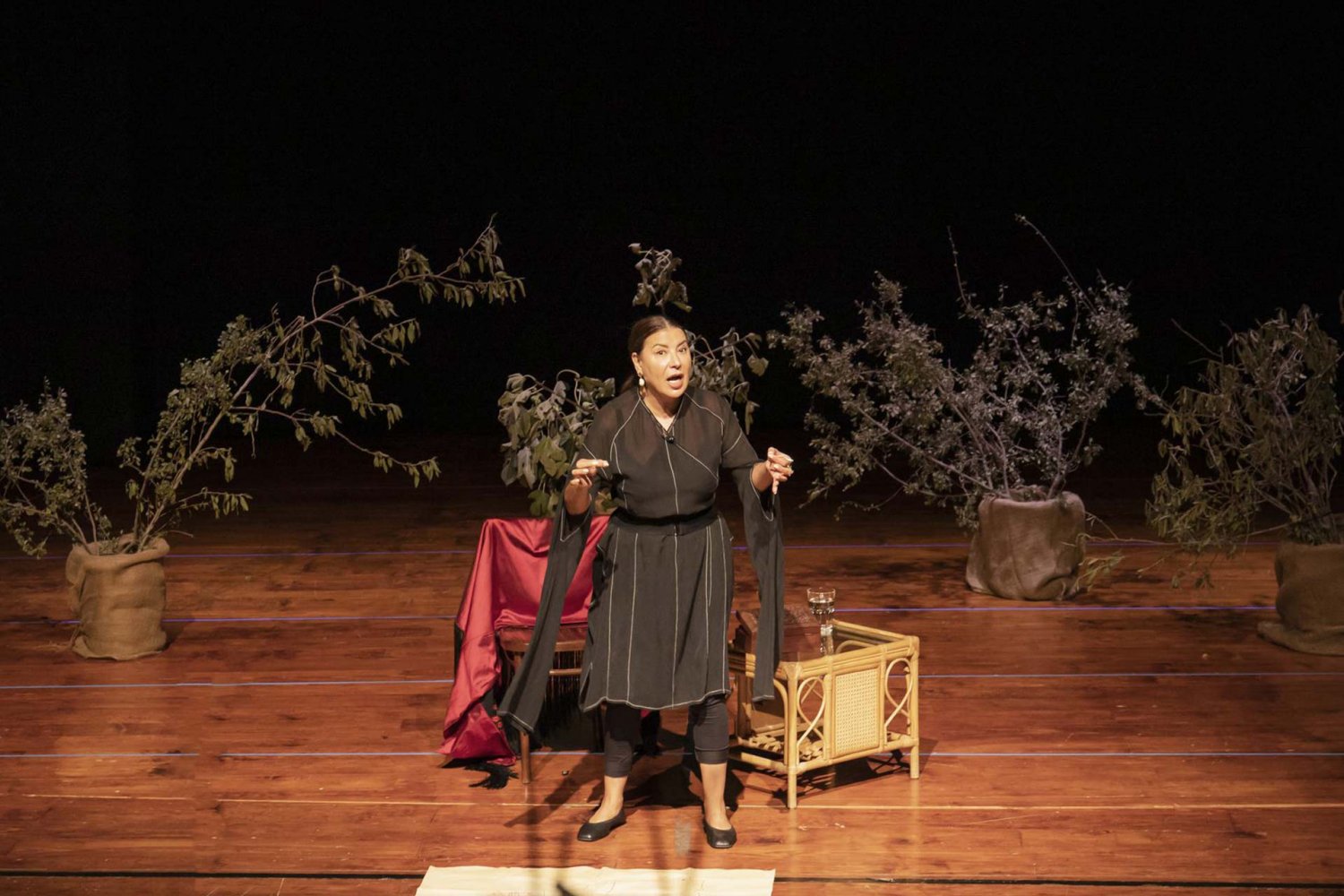 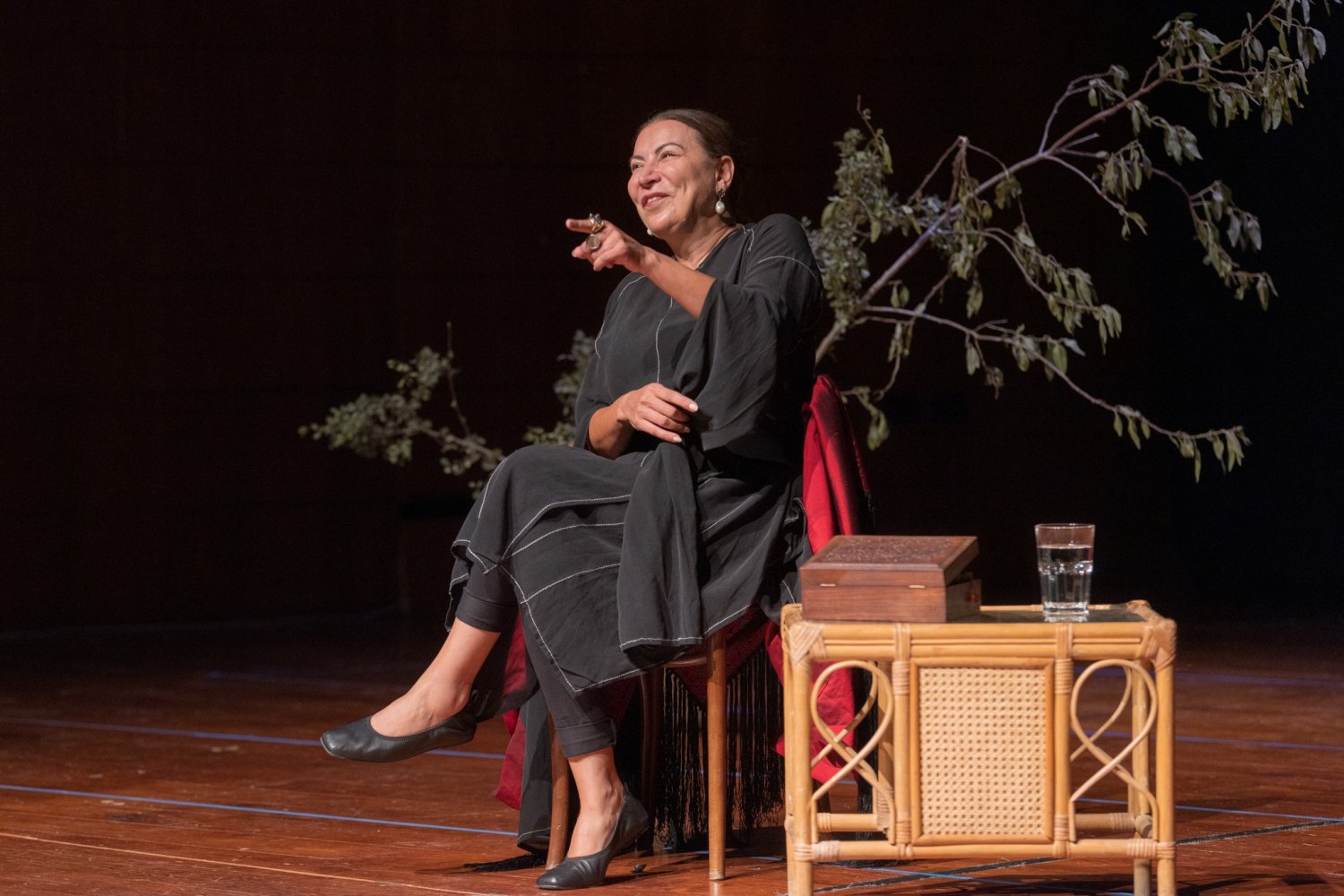 A highlight of the festival was Raeda Taha’s “The Fig Tree,” a play that came to Jerusalem after showing around various cities in the country over the summer.

A monodrama, this play conceptualizes the fusion of personal and national liberation by taking the audience on an intimate trip from pre-1967 Jerusalem to life in exile and back to Palestine in 1994.

The audience was enthralled by Taha’s witty sense of humor, exquisite talent at accent mimicry, and impressions of known personalities.

Through the medium of humor used to sweeten bitter and horrid accounts, Taha recounted memories of the 1960s through the 1990s and beyond, all the while using her firsthand knowledge of the political scenes in the region. She draws upon her experience of having been the press secretary of and one of the closest companions to late president Yasser Arafat, whom she charmingly mimics in her play.

Born in Jerusalem in 1965, Taha and her family were forced out of their beloved Afghani quarter (close to Bab al-Ghawanmeh, one of the gates leading to the al-Aqsa Mosque) in 1967 when she was two and a half years old. She moved with her family to Amman, then to Beirut, and later to Tunisia (where she married her late husband, Suheil Gedeon, in a wedding that Arafat attended). Her father, Ali Taha, was a fida’i (a freedom fighter) who hijacked a plane in 1972 in an operation with the Palestine Liberation Organization (PLO), with the plan to trade in for Palestinian prisoners. He was killed shortly after, when his daughter was barely eight years old. After the Oslo Accords, Taha managed to return to Palestine.

From that point, she was introduced to Jerusalem with new eyes. Prior to returning, her salient childhood memory was a garden full of trees in their neighborhood of Ras al-Amud, particularly three fig trees from which her father used to pick figs. To this day, the fig tree and figs remain her favorite, as evidenced by the play’s title.

Taha’s powerful performance received a standing ovation. Her description of the Old City of Jerusalem was particularly evocative: She described herself going up the Via Dolorosa stairs, while imagining her late father lifting her up to a nostalgic place in between the smells of incense and sesame seeds. Through the processional route, his apparition described to her the 10 doors of Jerusalem as he recalled them. “It felt like I was the dead one, while my father seemed to still be alive,” she shares. In recounting her intimate stories with intricate details of Jerusalem, Taha gave power to individuals, including her aunt ‘Abla, who had been arrested by the Israeli police, detained and tortured, and deported to Jordan while she was four months pregnant in the 1970s.

Also featured at the festival were Nidal Badarneh, a stand-up comedian from the village of Arrabeh who has directed and performed in a number of comedic plays and directed films; the Palestinian Elia Youth Group in “Searching for Zarif,” a dance of about resilience and resistance in the face of the occupation; and the Arab Orchestra of the Jerusalem Society for Music Teaching and Research, conductor Suheil Khoury. 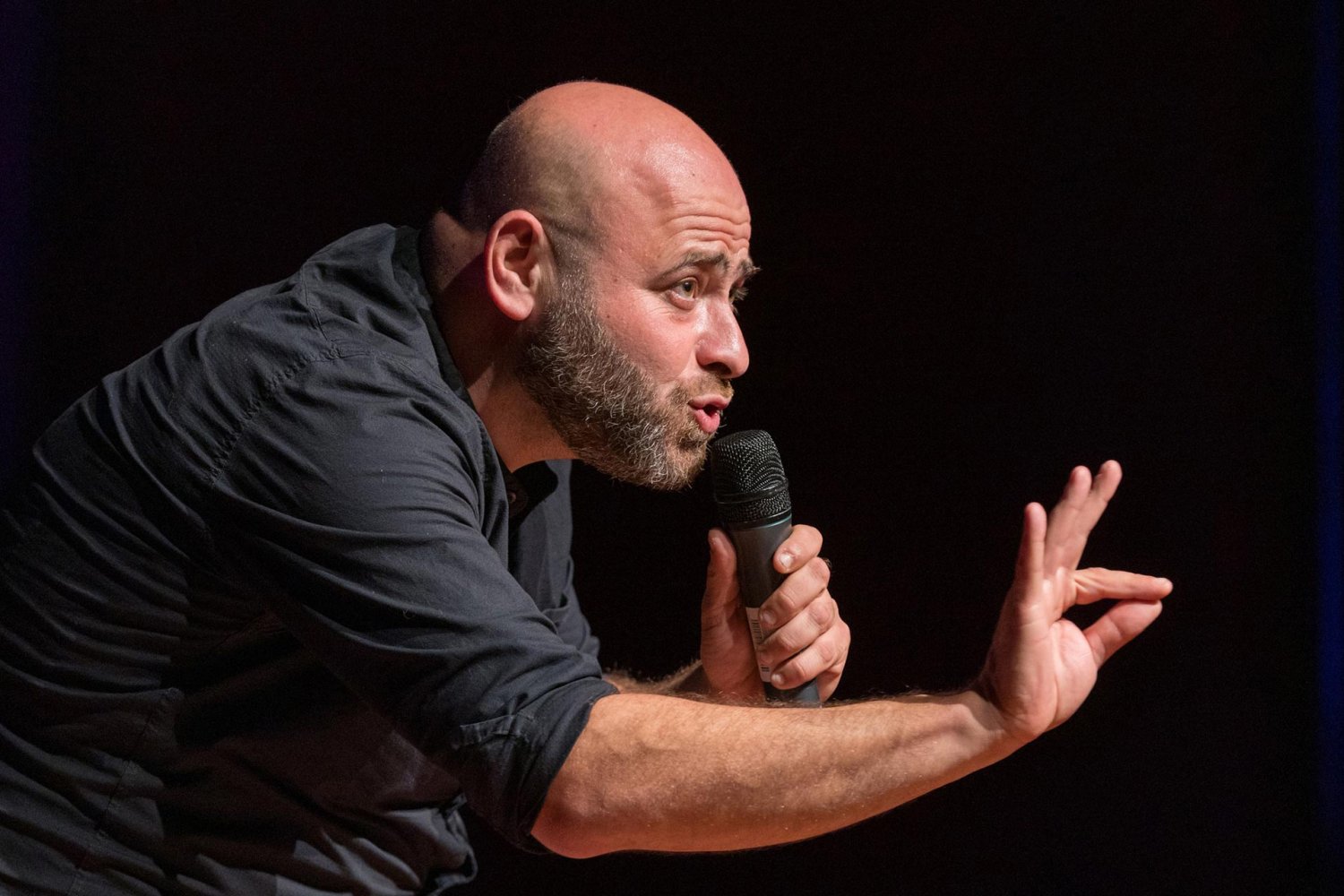 Comedian Nidal Badarneh performs a stand-up show as part of the Jerusalem Music Festival at Yabous Culural Centre in East Jerusalem, on September 19, 2022. 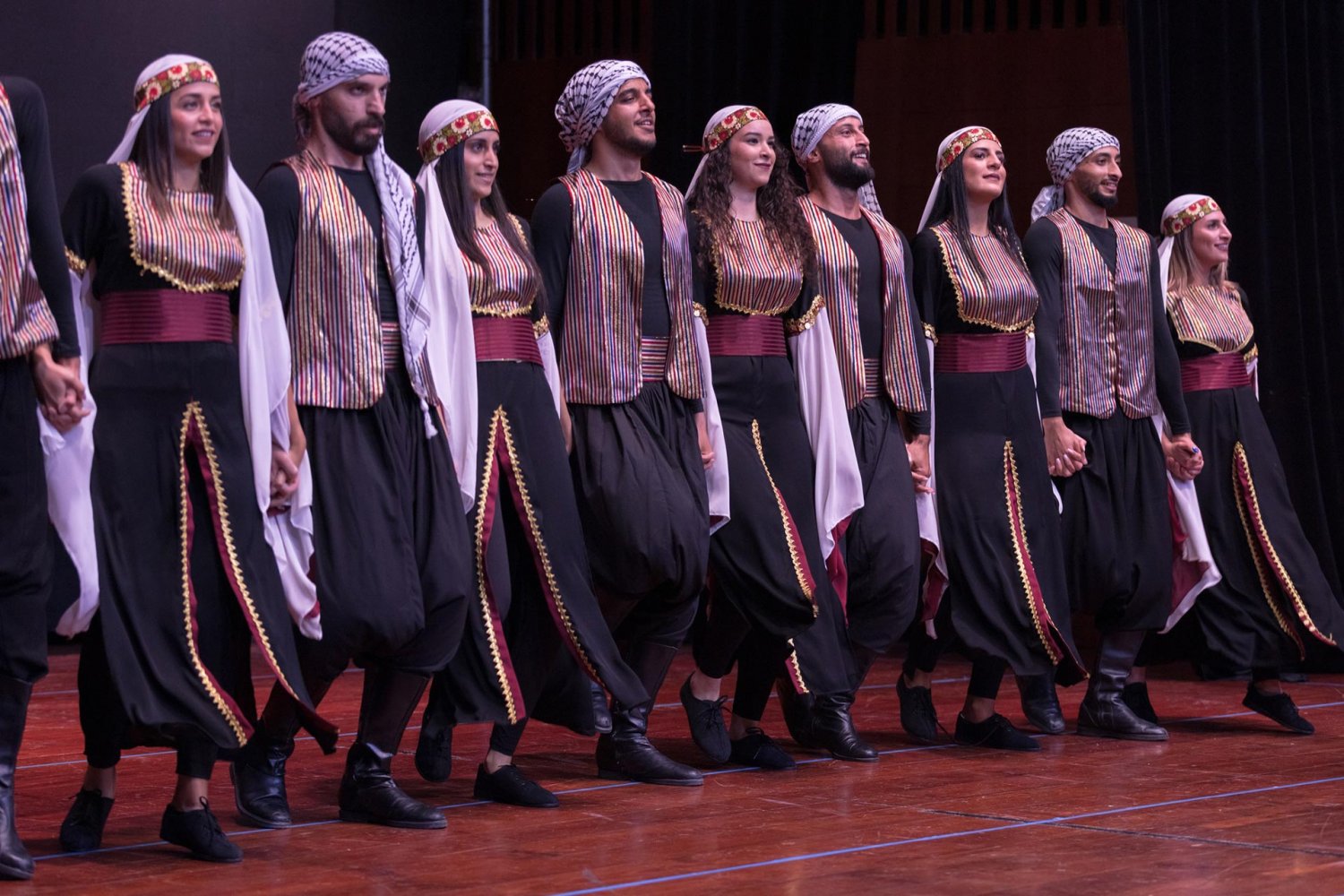 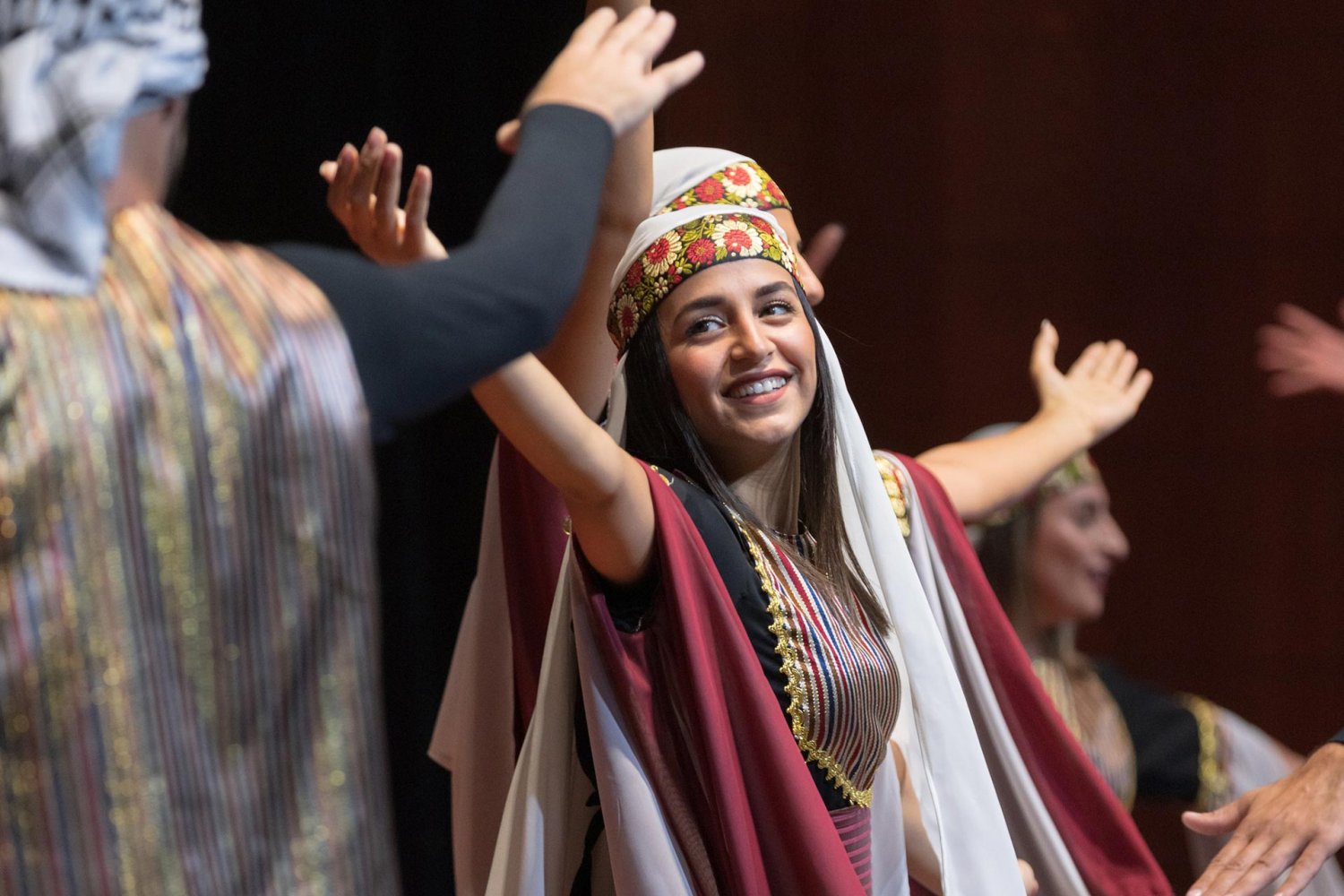 In addition to the festival itself, Yabous showcased the works of talented Palestinian visual artists in an exhibit entitled “Swarm.” According to a poster at the exhibit, “The works examine the restrictions imposed on the private and public spaces, under the influence of several factors, may it be political, social, legal and psychological challenges in our Palestinian society, as individuals, groups, landscapes, plants, and even animals. These factors threaten to restrict basic and public liberties.”

The exhibit ran throughout the festival. 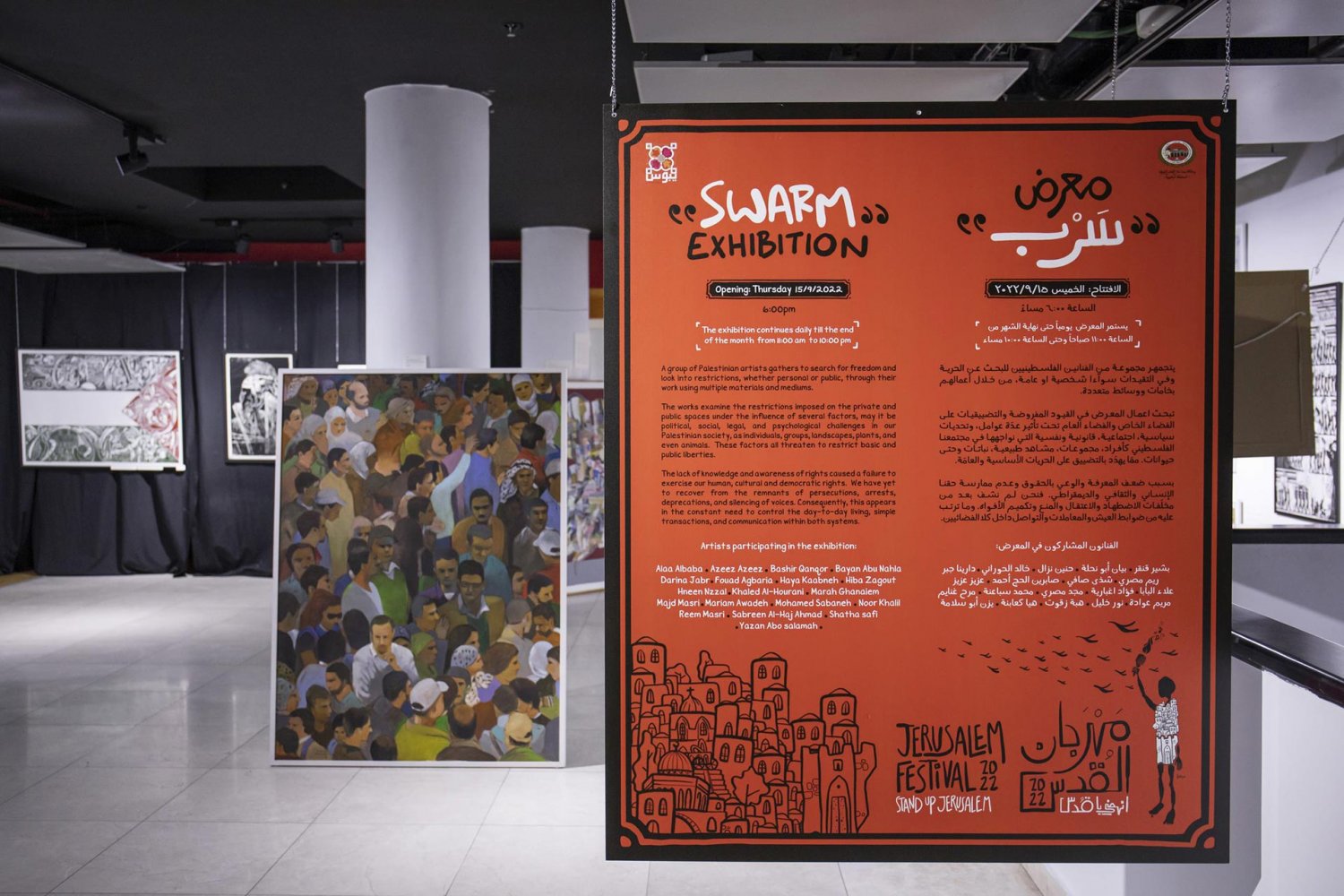 A poster explains the themes of the Swarm exhibit that ran in conjunction with the 26th annual Jerusalem Music Festival on September 16–21, 2022. 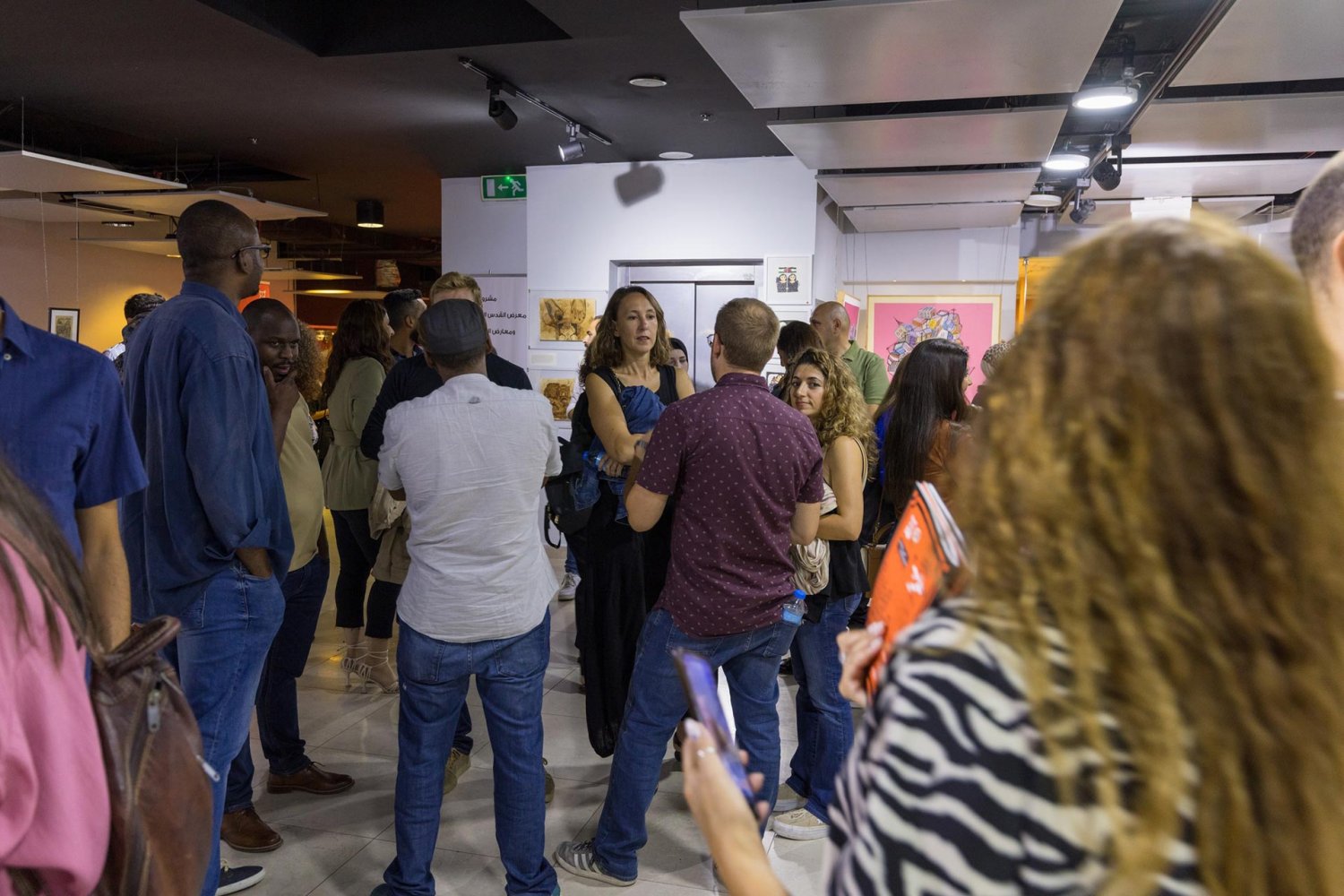 Attendees enjoy the various works on display as part of the “Swarm” exhibit that ran in conjunction with the 26th annual Jerusalem Music Festival on September 16–21, 2022. 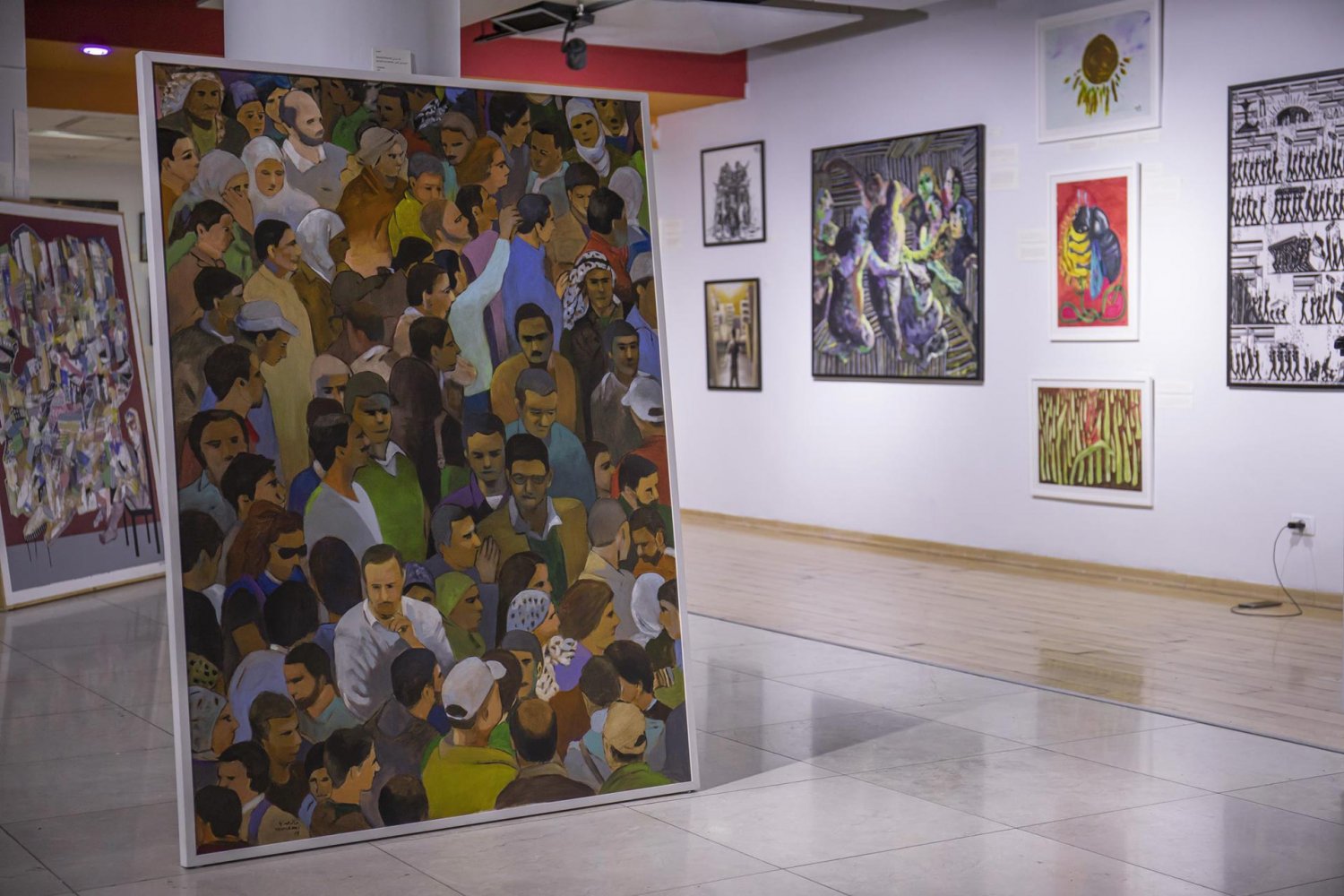 A selection of the paintings displayed as part of the “Swarm” exhibit that ran in conjunction with the 26th annual Jerusalem Music Festival on September 16–21, 2022 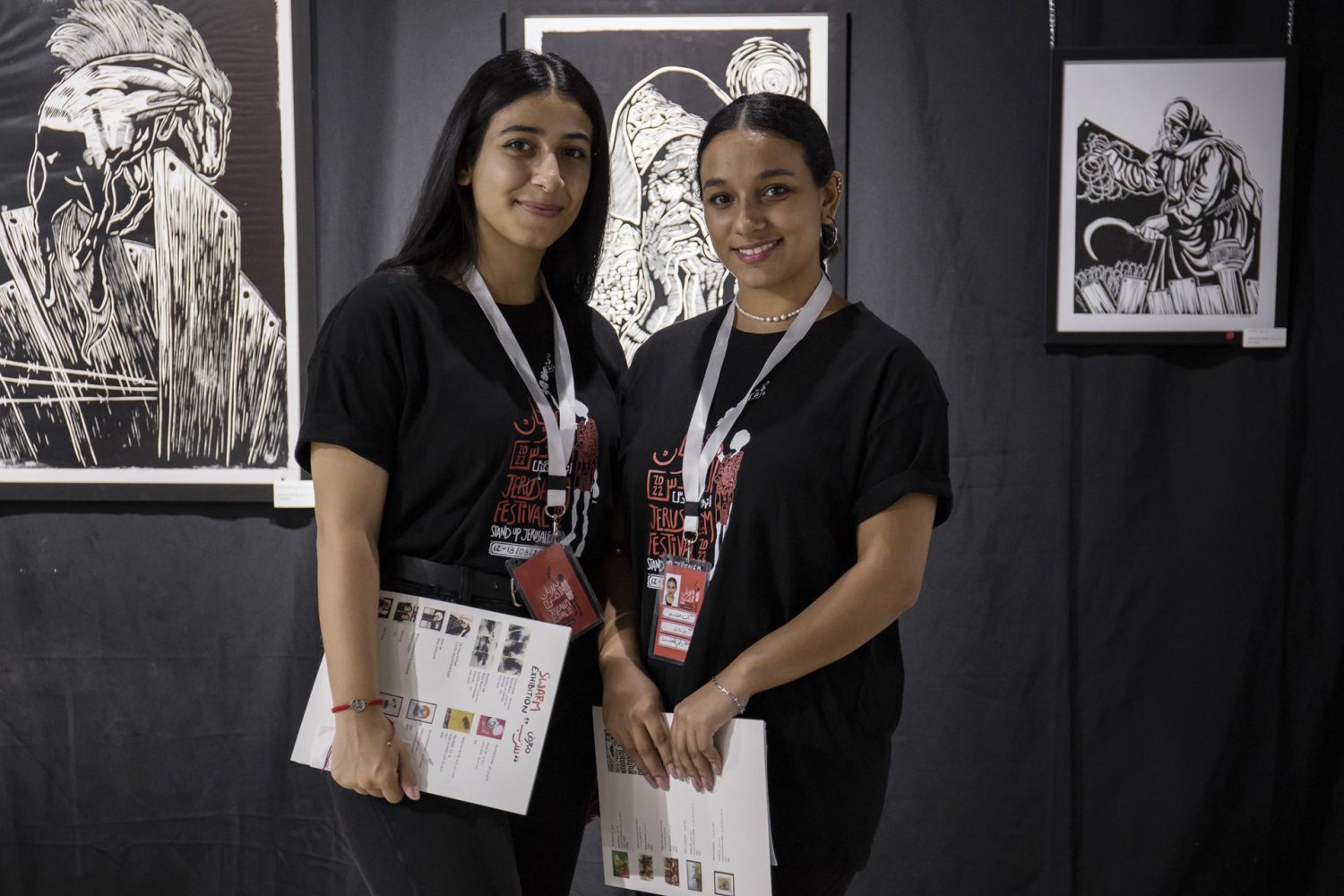 Volunteers helped make the Jerusalem Music Festival a success as they helped at Yabous Cultural Centre in East Jerusalem on September 16–21, 2022.

The festival’s first edition was launched in 1995, with this year marking its 26th annual edition (one year was missed due to the coronavirus pandemic). This year’s festival aimed to highlight the importance of national culture in building individual and collective awareness. Through the varied artistic program, festival organizers aimed to address the restrictions imposed on Palestinian creative expression, public spaces, cultural institutions, and individuals in Jerusalem and beyond, as well as addressing sociopolitical issues using the arts as a tool for expression.