To the northwest of Jerusalem, the historically interconnected villages of Beit Iksa, al-Nabi Samwil, al-Khalayla, and al-Jib have been divided and suffocated by the Separation Wall. Expanding Israeli settlements and Israeli-only bypass roads surround these villages, making entry and egress for the Palestinian residents of the villages very difficult.

The northwestern section of the Separation Wall envelops several Israeli settlements that lie outside the Jerusalem municipal boundaries: Giv’at Ze’ev, Giv’on, Giv’on Hadasha, Beit Horon, and Har Homa. Two Israeli-only roads, 443 and 436,1 are also encompassed in this section. They intersect within the enclave at the Giv’at Ze’ev junction, connecting the settlement with central Jerusalem and Modi’in Illit to the west, all the way to the coast.

The route of the wall in this section runs well beyond the Green Line and the Jerusalem municipal boundaries, which surround the Ramon Allon settlement. As a result, the Israeli government expropriated the vast farmlands that belong to Palestinian villages and surround this section of the wall, including the West Bank villages of Beit Surik, Beit Ijza, Beit Biddu, Beit Duqqu, al-Tira, Beit ‘Ur al-Fawqa, Beitunya, al-Jib, and Beit Hanina al-Balad.

The Fate of Palestinian Villages: Enclosed and Isolated

In its path, the wall also encloses the Palestinian villages of Beit Iksa, al-Nabi Samwil, and al-Khalayla, also in the West Bank. By enclosing them into the wall but outside the municipal boundaries, these villages became stranded, isolated both from Jerusalem and from the West Bank, creating an untenable situation for their residents. Bounded by the wall, Israeli-only roads, expanding settlements, and land designated as Area C, residents of these villages are not granted building permits and are denied basic services, transportation, water, and infrastructure by Israel. The Palestinian Authority (PA) is unable to reach them because of the wall.

While some residents of these neighborhoods carry Israeli IDs, they are not accorded the rights of other Palestinians in Jerusalem that have the same ID or residency status. For example, Israel pressures the residents of al-Khalayla who hold Israeli IDs to leave it, by cutting off their health insurance on the grounds that they live in an area that is not under Israeli administration. This forces them to leave the neighborhood and live in areas subject to the borders unilaterally set by the municipality in Jerusalem. For example, Kamel Taha, 50, said that he had to leave his home in al-Khalayla and live in Shu‘fat refugee camp for fear that Israel would cancel his family’s health insurance.2

By enclosing them into the wall but outside the municipal boundaries, these villages became stranded, isolated both from Jerusalem and from the West Bank.

Most residents carry Palestinian Authority IDs, which means they cannot breach the municipal boundaries and enter the city without a permit. Therefore, residents of these villages are not allowed to enter or work in Jerusalem without a permit, and access to nearby villages in the West Bank, as well as the Ramallah region for schools or hospitals, is impeded by the wall and requires very long travel on multiple busses through bypass roads. What is more, the import of basic products and resources is heavily regulated and usually denied.

Beit Iksa is a Palestinian village of 1,900 people 9 kilometers (5.5 miles) northwest of Jerusalem. It is surrounded by an electronic fence on its northwestern side and an approved barrier route on all its other sides leading to Jerusalem.3 Although Beit Iksa is considered part of the West Bank, Palestinian residents there require special permits and heavy security checks even to enter their own village. Entry permits are largely reserved for those who are employed in the village, such as teachers and medical staff. 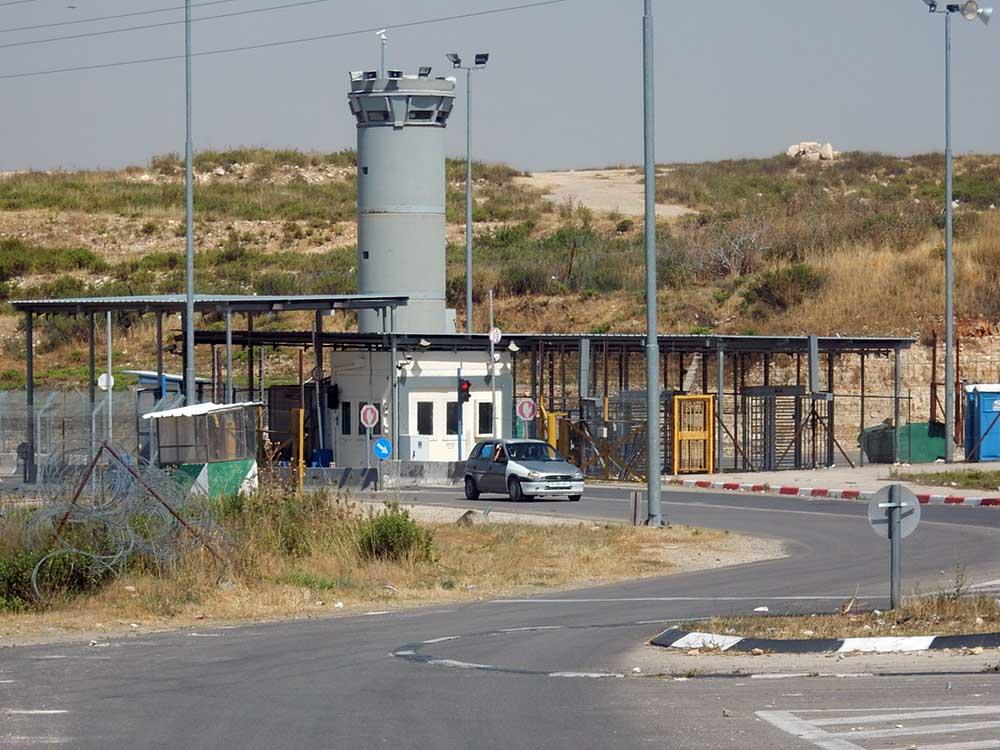 The road to Beit Iksa has been completely blocked as of March 2021, even to villagers who want to enter and leave by foot. The road has been closed to vehicular traffic since 2006.

The road leading to Jerusalem is completely blocked; even those residents who carry Israeli IDs have to travel all the way to Ramallah and then make a U-turn and turn back through the Qalandiya checkpoint. As a result, about 50 families (some 600 Palestinians with Israeli IDs) have left Beit Iksa in order to remain connected to Jerusalem, the “historical center of life in the district.4

Al-Nabi Samwil is an ancient Palestinian village dating back to the time of Salah al-Din. The site—spectacularly located atop a hilltop that overlooks the entire country’s landscape below, as far as Tel Aviv, the sea, and the Jordanian hills—is believed to contain the tomb of the prophet Samuel. A crusader church that was built at the top of the hill today contains a mosque that still used (under severe limitations) by the villagers. Underneath the mosque, in the same building underground, is a Jewish Orthodox synagogue.

Before 1967, over 1,000 Palestinians lived in the village. Their homes were built in and around the antiquity site. While most fled during the 1967 War, some remained.

In 1971, the army demolished the village, which was embedded in and around the tomb atop the hillside and relocated its remaining few hundred residents to a nearby area down the hill. Today, this area is home to some 250 residents, and the village is imperiled.

Emek Shaveh, an Israeli NGO working to defend cultural heritage rights and to protect ancient sites as public assets that belong to members of all communities, faiths and peoples, produced this video, in which they spoke (in Hebrew) with Eid Barakat, a farmer and resident of Nabi Samwil, about the abysmal conditions in which the village is forced to live.

In 1995, Israel declared the original site of al-Nabi Samwil a national park, with an area of approximately 865 acres.5

Part of the wall, which was constructed between 2005 and 2006, cuts through the village, blocking the roads that lead directly to the nearby villages of Beit Iksa and al-Jib—its access points to the rest of the West Bank.

In addition, the village is surrounded by military technology, including cameras and antennae, as well as by a military outpost enclosed in a concrete wall.

Since it has been designated as a national park, residents have to abide by the Israeli Civil Administration and the Israeli Antiques Authority, which require them to request permits for construction—even for renovation—as well as for cultivating their own land or grazing their cattle on it. Most permits are denied.6 Planting a tree is not allowed. 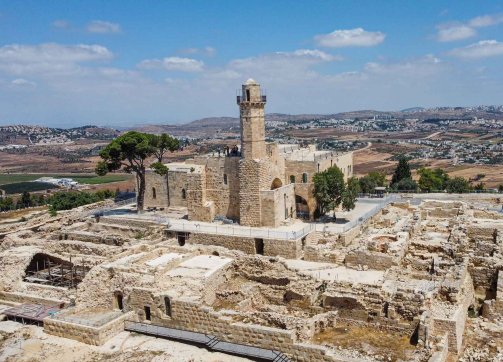 The crusader castle and mound of antiquities (undated) 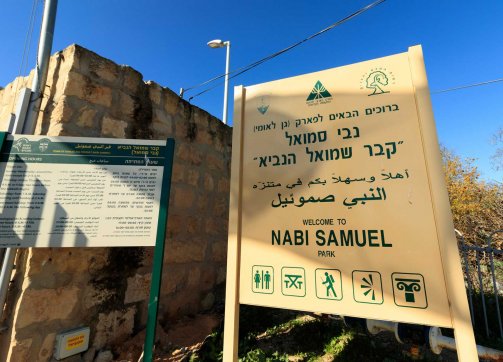 The sign posted by the Israel Nature and Parks Authority marking the entrance to the Nabi Samuel National Park, as shown on December 10, 2020 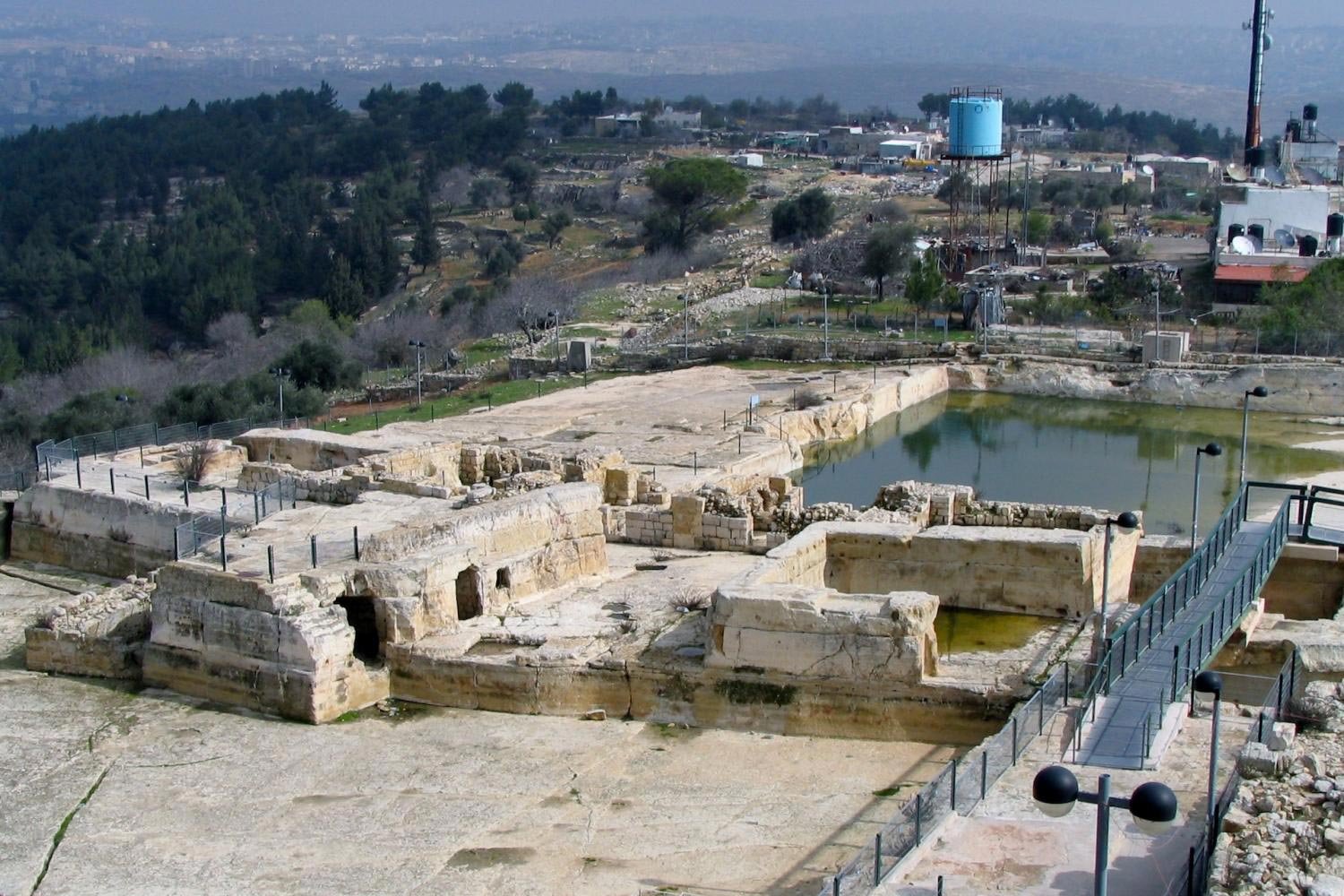 Al-Khalayla is a small neighborhood of 700 Palestinians that belongs to the village of al-Jib. Al-Khalayla was disconnected from al-Jib by the wall and a military checkpoint that was built in 2003, leaving it almost invisible amid the wall, Israeli-only roads, and four large Israeli settlements that are expanding around it. Since the 1980s, Israel stopped granting residents of al-Khalayla construction permits, subsequently demolishing approximately 70 homes in the neighborhood.7

Residents of al-Khalayla who carry Palestinian Authority IDs are prevented from traveling within Jerusalem, and in order to work in Jerusalem, they need special permits. To go to Ramallah, which is only a few kilometers away, a resident needs to take three buses and go through a military checkpoint.8

Muhammad Abu al-Filat, “The Neighborhood of al-Khalayla in Jerusalem: Isolation and Marginalization” [in Arabic], August 23, 2016,

B’Tselem, “Isolated: Israel Cuts Village of Beit Iksa Off from East Jerusalem and the Rest of the West Bank,” August 17, 2016.

For more about al-Khalayla, see Alghad Extra, “The Neighborhood of al-Khalayla: Isolation, Marginalization, and Nonexistent Services in Jerusalem” [in Arabic], September 12, 2019.

Cold, arbitrary political decisions prevented Watan’s timely access to medical services and left her in a wheelchair; years later, similar calculations may have led to her death.

Personal Story In Limbo on the Waiting List: The Life of a “Stay Permit” Spouse