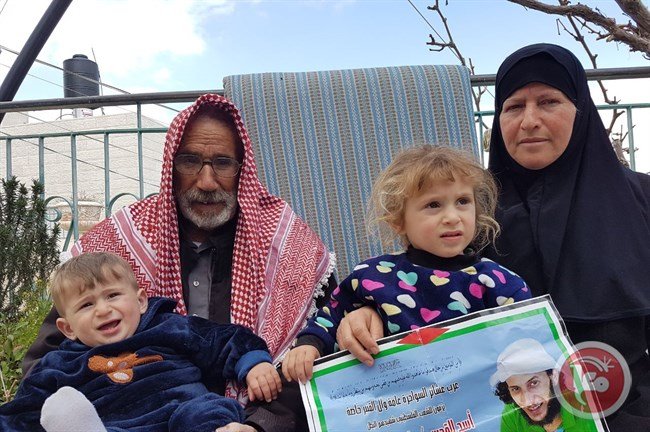 Three generations of a family had to pay for the acts of one of its members, who was killed on the scene of the incident.

On January 8, 2017, Fadi Ahmad Hamdan al-Qunbar, a 28-year-old Palestinian from Jabal Mukkabir in Jerusalem, rammed a truck into a group of Israeli soldiers in the adjacent Jewish neighborhood of Armon HaNatziv and then went into reverse, driving over the wounded; four people (three women and a man all in their 20s) were killed; 17 were wounded. A soldier on the scene shot and killed al-Qunbar, obeying an unwritten Israeli policy to “shoot to kill,” evidently adopted in September 2015.1

While the Israeli media presumed this was an intentional terrorist attack, there was in fact no way to determine the cause, as the assailant had neither spoken of any intention before, nor did he leave any statement to be found after his attack. As his sister Shadia said at the time, “We don’t know what happened with Fadi. He called his wife (before the attack) and told her to prepare lunch.” She also explained that the family only found out about al-Qunbar’s involvement upon seeing footage of the incident on TV.2 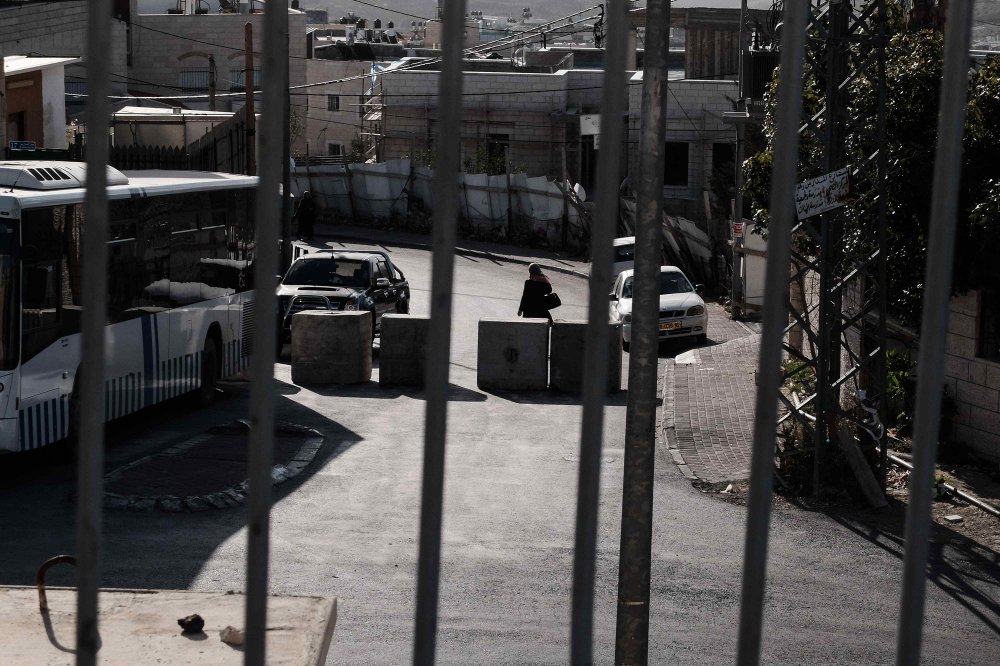 The al-Qunbars’ neighborhood of Jabal Mukkabir in East Jerusalem was closed the day after the attack. Shown here is the view of the neighborhood from a police observation post in the Jewish neighborhood of Armon Hanatziv on the morning after the truck ramming, January 9, 2017.

To start, Fadi’s wife and children received letters stating that their residency statuses were revoked. More such notices were soon to follow (see below). Israel also sealed their home by filling it with concrete.

In 2017, the District Prosecutor’s Office in Jerusalem, in conjunction with the Defense Ministry, filed a precedent-setting compensation civil lawsuit against Fadi’s wife and three children (aged between one and eight at the time). The compensation requested amounts to a total of $2.3 million—$572,000 apiece for each of the four Israeli soldiers killed, including the burial expenses and the compensation the state pays to the soldiers’ families3 Dalia Kerstein, director of HaMoked Center for the Defence of the Individual, which provided legal support to the al-Qunbar family, called the civil suit “. . . legal but . . . completely vicious, vindictive and ugly.”4

After occupying and dividing the village, Israel conducted a census. Palestinians who were present at the time of the census and were living in al-Sawahira al-Gharbiyya, including Jabal Mukabbir, were given the status of Israeli permanent resident and issued Israeli (blue) IDs (see Precarious, Not Permanent: The Status Held by Palestinian Jerusalemites, Part 2), while those who were living in al-Sawahira al-Sharqiyya, including Sheikh Sa‘d, were issued West Bank (orange) IDs by the Israeli military government of the West Bank.

Manua was born and raised in al-Sawahira al-Sharqiyya, and until 1988, she held an orange ID. Her husband was born in Jabal Mukabbir and held a blue ID. Manua was granted Israeli permanent residency in 1988 through the family unification process (before it was banned in 2000).

Two days after Fadi was shot and killed during the attack, more than 10 letters dated January 10, 2017, were sent to different members of the Qunbar family, stating that the Israeli Ministry of Interior was considering revoking the residency of 12 persons who are related to Fadi, including two minors and his mother, Manua.

The letter that the Ministry of Interior sent to Manua stated that they were considering revoking her residency because her marriage was bigamous. However, the letter mentioned the “attack.” It stated the following:

Following the severe attack which was carried out two days ago in the Armon Ha-Natsiv neighborhood in Jerusalem, which led to the killing of four Israeli citizens, a discussion was held with some security officials at the Minister of Interior’s office. During this discussion, there was the presentation of some data from your personnel file at the Population Authority. This data indicated that you received your Israeli resident status from your marriage. You declared that the marriage was not a bigamous marriage, but in reality, it was.

In light of the above, and since the status was given to you based on some false statements that contradicted the existing [public] policy while such status cannot be given based on a bigamous marriage, we are currently considering the possibility of revoking your residence status.

Before a decision is made regarding this matter, you have the right to bring before the Population Authority every kind of plea that you have.5

Under the Israeli Family Unification law, it is illegal to submit a family unification application on behalf of a spouse in a bigamous relationship. Manua received her Israeli residency through the family unification process 31 years earlier. In other words, in the wake of her late relative’s actions, she was accused and punished for submitting “false statements” decades after the alleged attack was committed.

Other family members received letters that stated: “This decision had been made due to the attack and that the family is suspected of having connections to ISIS [Islamic State]” and are a security risk “as long as they remain in Israel.”

Arab al-Sawahira is known for the close ties and relationships between community members, who are all related to one another. Many of the families include members whose parents hold two different types of ID: Israeli-issued (blue) or PA-issued (green).6 Some hold stay permits that allow them to live with their spouses in Jerusalem.

Family members who are not classified as first-degree relatives also received letters stating that the Israeli interior minister is considering revoking their permanent and temporary residency in addition to stay permits belonging to those who hold them.

Letters to this effect were sent to Israeli permanent residents Suha al-Qunbar, Fadi’s sister, and her children, aged 11 and 17 years; Dia’ Aweisat, Fadi’s nephew; and Ahmad, Mohammad, Salah, Zakaria, and Younes al-Qunbar, Fadi’s cousins. Suha’s letter informed her that Israel was revoking the stay permit granted to her husband, Murad Aweisat, through the family unification process. Dia’ was informed that the family unification application he submitted on behalf of his wife (who holds a green ID) had been revoked.

Manal al-Qunbar, Fadi’s sister-in-law who holds a green ID and a stay permit (that allows her to live with her family in Jerusalem), was informed that her stay permit had been revoked.

Israeli interior minister Arye Deri was quoted as saying, “From now on anyone who plots, plans, or considers carrying out an attack will know that his family will pay a heavy price for his deed. The consequences will be harsh and far-reaching, like the decision I made regarding the mother and relatives of the terrorist who perpetrated the attack in Armon Hanatziv in Jerusalem.”7

“From now on anyone who plots, plans, or considers carrying out an attack will know that his family will pay a heavy price for his deed.”

The Qunbar family members all appealed these decisions to the Israeli Population Authority in Jerusalem. They all were forced to engage in a protracted legal battle against the Israeli security system. Family members gave very few statements and comments to the public to prevent the Israeli officials from using their words against them.

The current residency status of the family members is unknown because they generally refused to speak publicly.

Twelve members of the Qunbar family faced collective punishment in addition to police harassment for actions that none of them committed.

Twelve members of the Qunbar family faced collective punishment in addition to police harassment for actions that none of them committed.

In an additional punitive measure not uncommonly used in Jerusalem against Palestinians who attack Israeli Jews on political or nationalistic basis, the Security Cabinet refused to return Fadi’s body to his family for burial. On March 7, 2018, the Israeli parliament adopted Amendment 3 to the Israeli Counterterrorism Law of 2016 that grants the Israeli police the authority to withhold the bodies of Palestinians killed by the army from their families.8 It applies to both Palestinians who are citizens of Israel and those who are permanent residents. But this practice had been used prior to the passage of this amendment.9 In 2020 alone, Israel withheld the bodies of 13 Palestinians from their families, keeping them frozen, bringing the number held over the past five years generally (in Jerusalem and elsewhere) to 81.10 The law also imposes severe conditions on funerals for families of these individuals, limiting their size, location, timing, and number of attendees.11

According to al-Shabaka, the Palestinian Policy Network, “The expansive scope of Deri’s application of the law [in the al-Qunbar case] marked a clear extension in the reach of punitive residency revocation.”12

According to Kerstein, “The Qanbar family is experiencing a revenge campaign by the establishment after the terrorist attack carried out by a relative.”13

The Security Cabinet refused to return Fadi’s body to his family for burial.

Steven Klein, “Why Israel’s ‘Shoot to Kill’ Policy is So Dangerous,” Haaretz, October 20, 2015 (updated April 10, 2018). According to this article, leaders have given a clear green light to this policy through their words, notably: In September 2015, Prime Minister Benjamin Netanyahu declared his “zero tolerance for terror.” Interior Minister Gilad Erdan declared that “every terrorist should know that he will not survive the attack he is about to commit.” Jerusalem police chief Moshe Edri said, “Anyone who stabs Jews or hurts innocent people is due to be killed.” Yesh Atid’s Yair Lapid said, “You have to shoot to kill anyone who pulls out a knife or screwdriver.” And Jerusalem Mayor Nir Barkat called on Israeli civilians to carry their guns.

At the time of the census, in 1967, the West Bank IDs were colored orange and were issued by the Israeli military government of the West Bank in 1967. In 1981, this body was renamed the Israeli Civil Administration. Later, the Civil Administration became part of the Coordinator of Government Activities in the Territories (COGAT). After the Oslo Accords were signed, the Palestinian Authority took over the administrative responsibility for issuing West Bank IDs, which became green and were henceforth called Palestinian Authority IDs. Authority over approval for IDs remained with the COGAT.

What are the everyday interactions that pose risk to a Palestinian permanent resident of Jerusalem?

To what extent are the basics of daily life dependent on holding an ID for a Palestinian Jerusalemite?