Book Review: Jerusalem as It Was and What It Could Be Again

Jerusalem today is closed off not only to the entire Arab world but also to Palestinians in neighboring towns and cities, its residents hounded, and al-Aqsa Mosque the site of confrontations between worshippers and armed Israeli soldiers and settlers.

It is soothing, then, to imagine the Jerusalem of the early 20th century that the editor describes in the “Introduction” of Jerusalem Interrupted, winner of the Palestine Book Award in 2015. Here we meet Jerusalem the urban, cosmopolitan center connected to other regional capital cities—Cairo, Damascus, Beirut, Istanbul—through kinship, commerce, cultural practices, and other activities. It is a dynamic city of the arts, hometown to a host of cultures and ethnicities who lived together as harmoniously as can be expected in any city undergoing rapid change. As editor Lena Jayyusi (also a communications and media expert) explains in the “Introduction,” the natural transformations of the late 19th and early 20th centuries came to an end in 1948. After that year’s war and Palestinian exile, changes that suited foreign political interests would be grafted onto the city.

Not surprisingly, then, this cataclysmic event defines the two parts of the book; there is a before 1948 (part I) and after 1948 (part II). Before 1948, Jerusalemites were involved in creating and responding to changes in the region. After 1948, the city was controlled by nonindigenous forces that single-mindedly focused on redefining the space to make it exclusively and unalterably Jewish. This is a narrow, shabby plan for a city that in the early 20th century was poised for so much more. The final chapter of the book provides a vision of the future with possibilities and alternatives to the current dead end.

Part I begins with a chapter (1) on the development of photography: the tool that will allow Jerusalem’s indigenous people to document how they lived and viewed themselves in their city. The author dates the arrival of photography in Jerusalem to 1839 and the beginning of local photography (as practiced by Arab and Armenian photographers as a career) to the 1860s.

Pioneers include Garabed Kirkorian, who opened the first photographic studio, and Khalil Raad, the first Arab photographer in Palestine to capture landscapes and rural life.

Common themes of photography in the early 20th century were portrait photography (groups of family members or friends posing for photos in a studio); postmortem photography (pictures of deceased people surrounded by relatives); and war photography (men posing in their uniforms before being sent off to war).

Chapter 2 dives into the visual arts, covering almost the first half of the 20th century. Until the establishment of the British Mandate in 1921, Jerusalem artists were very much a part of the art world in other Arab cities—Haifa, Baghdad, Cairo, Damascus. Later, from 1921 until the revolt of the mid-1930s, Palestinian artists were influenced by European Renaissance works, only to then became more interested in modernism. The author provides an overview of the work of the city’s main artists in each of these phases.

Music in Ottoman Jerusalem, the theme of chapter 3, begins appropriately enough with the diaries of Wasif Jawhariyya and the wealth of information he provides (including a four-page list of the most admired amateur musicians, many of whom came from the old established Muslim and Christian Jerusalem families). The author describes a mature musical tradition that was integral to the region, from North Africa and Egypt to Lebanon, Syria, and the Arabian Peninsula. 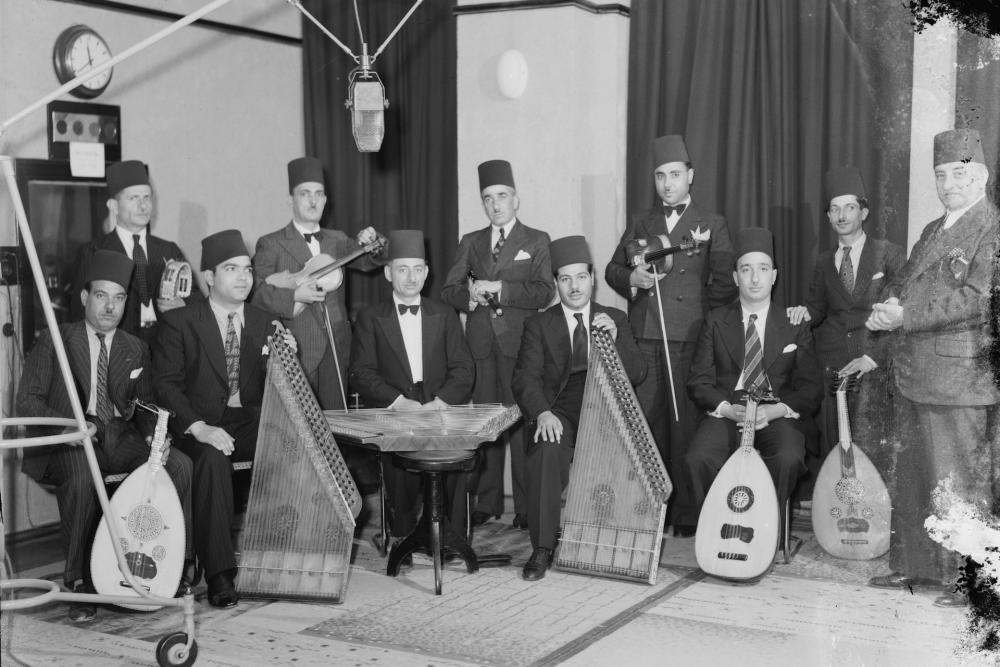 The status of the media prior to 1948 is the subject of chapters 4 (broadcasting) and 5 (press). The Palestine Broadcasting Service began as a project to serve the British Mandate, but the Arabic section (under the management of ‘Ajaj Nuwayhid) soon became a local space in which Arab nationalism was promoted. Just over 100 Palestinian publications were published in Jerusalem between 1876 and 1948, funded either by religious institutions, individuals or families, or political parties.

During the Mandate period, the (nonreligious) publications adhered to specific political currents (for example, al-Husseini nationalists; Nashashibi oppositionists; communists/socialists). The author concludes from the trajectory of the press that had the Nakba (Catastrophe) not occurred, a democratic social and political order might have emerged from these foundations. 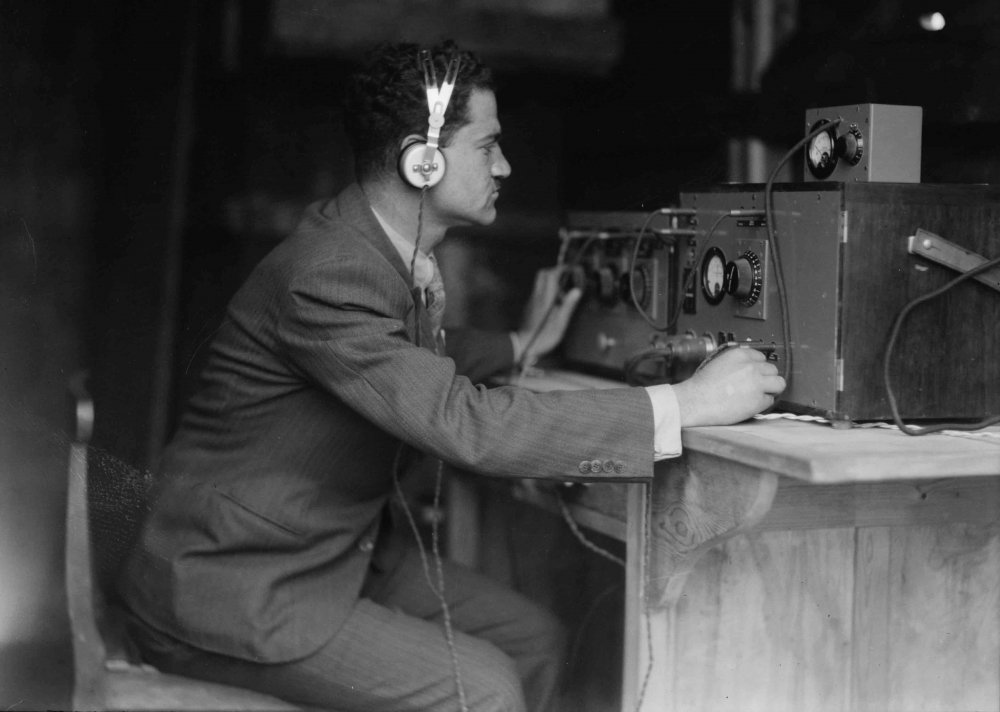 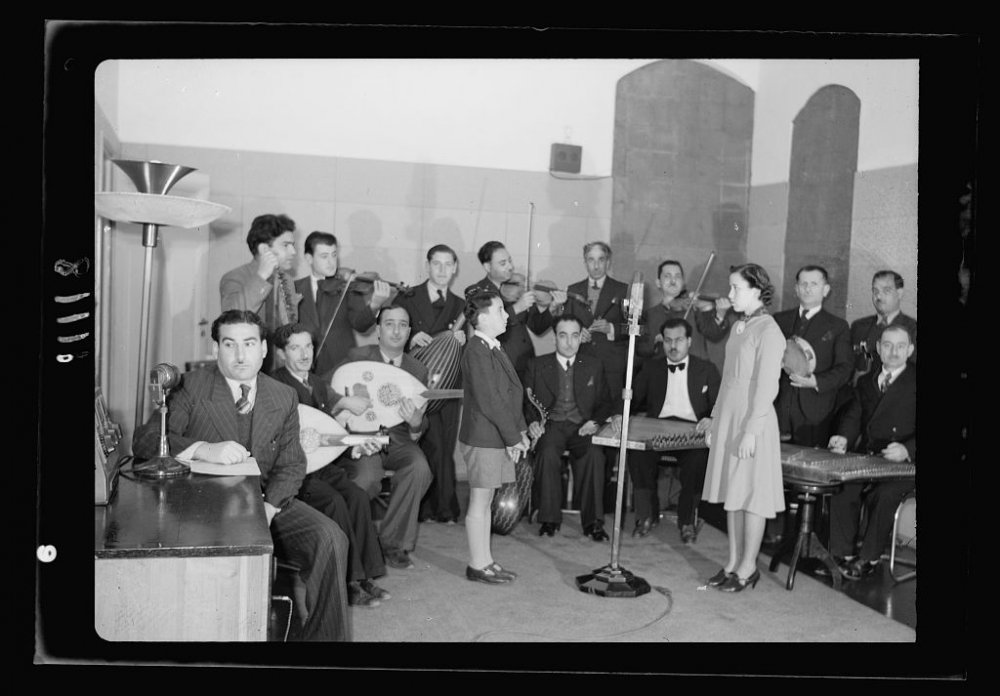 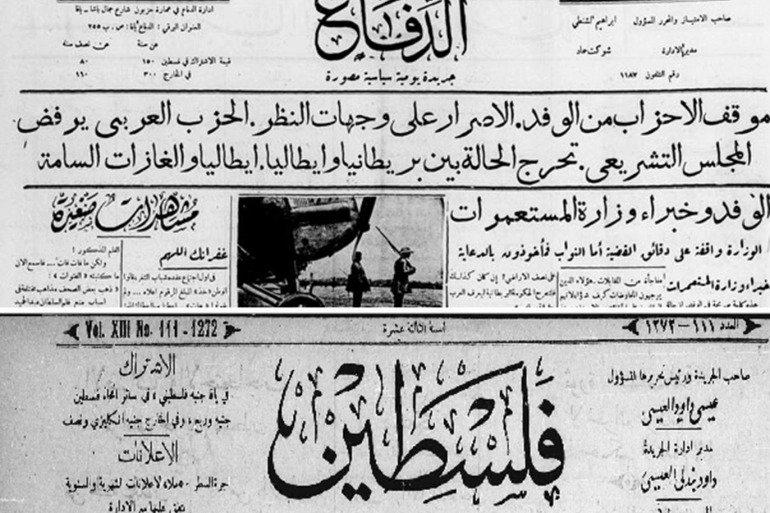 The National Library of Israel

In “Healing Jerusalem” (chapter 6), the focus is on public health and clinical services in Jerusalem that were initiated during the Ottoman period and other services introduced during the British Mandate. The author shows that medical conditions during the Mandate were tied to colonial practices. Nationalism and Islamic ritual are the focus of chapter 7, and the author describes how the Nabi Musa Festival was transformed from a religious festival into a nationalist statement responding to British colonialism and Zionist immigration policies. 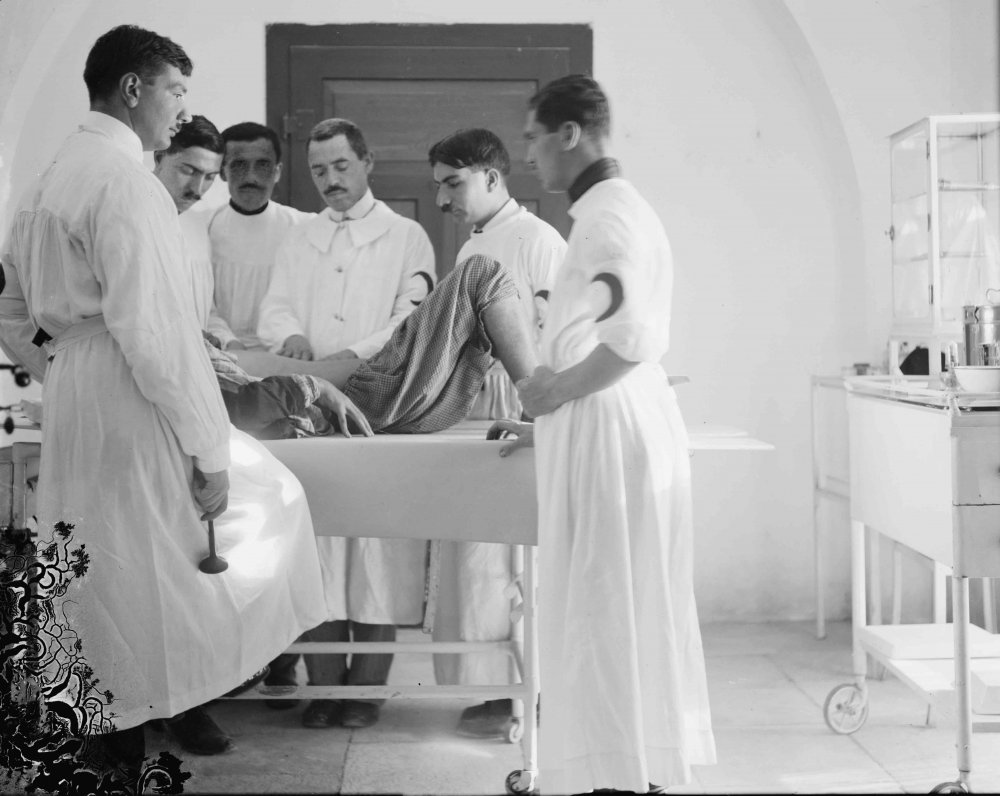 Chapter 8 discusses the politicization of Jerusalem’s Arab women and their leadership role in the women’s movement during the Mandate period. Arab women throughout the region were becoming active in charitable work and associations in the late 19th and early 20th centuries, but for Jerusalem women, the work had political overtones during the Mandate. They promoted education and aid to the poor and sent clothes to prisoners, but they also went on strike to protest Jewish immigration, sent petitions to the high commissioner, and protested Mandate terrorist practices such as home demolitions and deportations. (The latter two would later be liberally applied by the Israeli occupation with the same latitude as Mandate authorities employed.)

Attire and handicrafts and the insights they offer into Palestinian heritage are the focus of chapter 9. The author describes traditional and modernist costumes as well as jewelry and other types of accessories. One section describes the attire and accessories needed to go to the public baths, a practice prevalent throughout the Arab world. 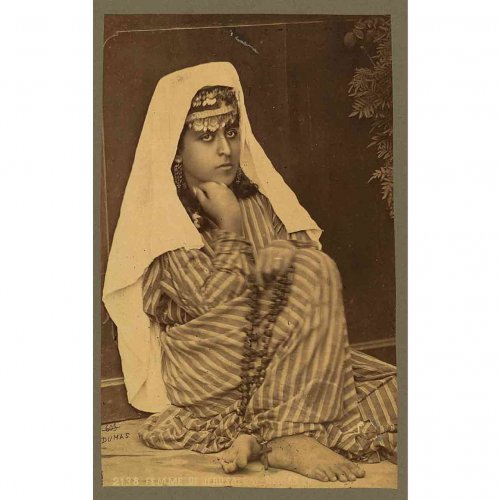 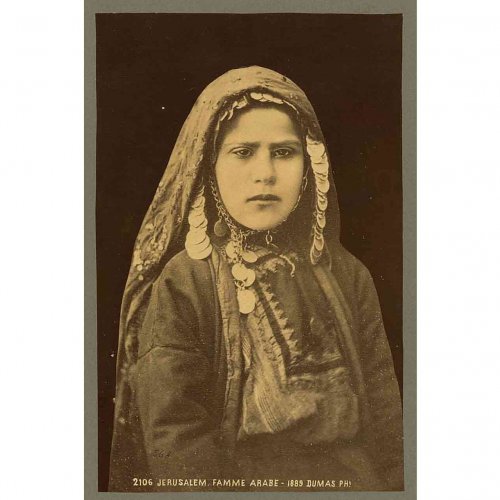 An Arab Woman (Famme Arabe) from Jerusalem, photographed in Jerusalem, 1889

Chapters 10 and 11 give a sense of the lived experience of Jerusalem and then nearby Sheikh Jarrah families prior to 1948. Much of the information comes from memoirs.

One interesting factoid is that people were more likely to associate with others in their neighborhood (class) rather than their same religious or ethnic backgrounds. And because Jerusalem was the site of British Mandate offices and a great deal of political activity, Jerusalem children had a political awareness that is perhaps surprising.

The final chapter in part I lists the palaces and properties that comprised the Sheikh Jarrah quarter in the north of Jerusalem. 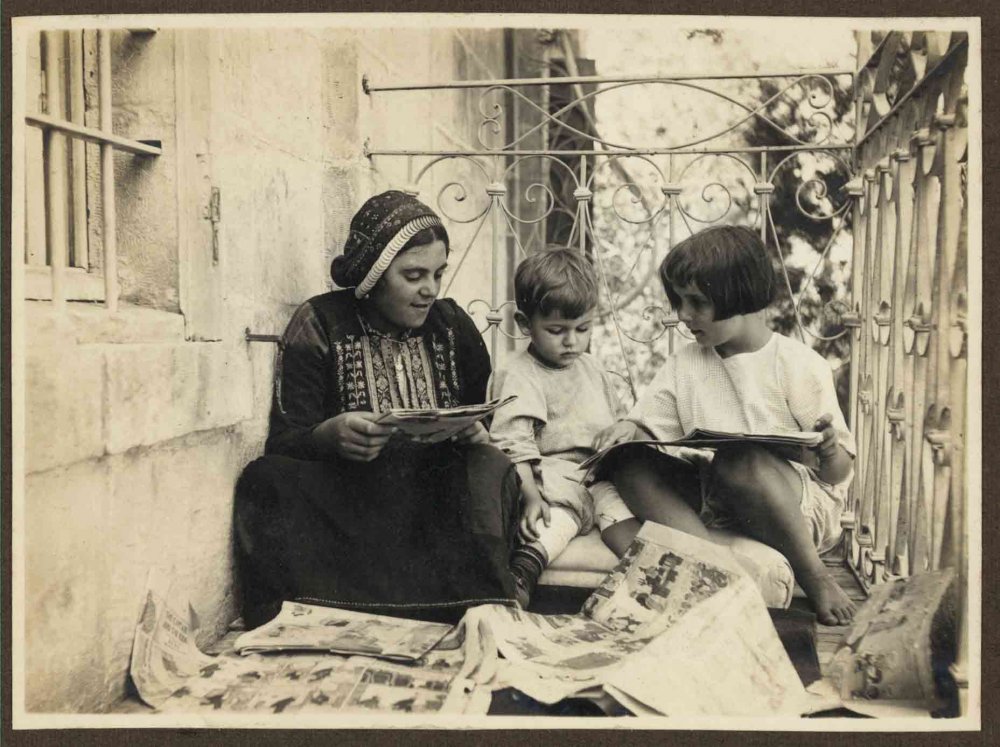 Mother and children reading comics together

Part II: 1948 and After: Transformation of Space and Place

Part II deals with the post-1948 reality of the city and its transformation after the Nakba. Chapter 13, “Diverse Absences,” describes how neighborhoods in West Jerusalem were suddenly stripped of their Arab inhabitants and reconfigured as Jewish Israeli spaces. Reconfiguring spaces often involves “discovering” artifacts that support nationalist claims; how that is done through archeology is the focus of chapter 14.

When it asserted control over Jerusalem, Israel had to develop a policy that would induce Palestinian and non-Jewish communities to accept Israeli sovereignty, and chapter 15 examines Israel’s handling of Jerusalem’s Christian communities. It explores at length the consequences of what has become known as the “St. John’s Hospice Incident” (the occupation by Jewish settlers of the St. John’s Hospice, which has resulted in ongoing litigation). The event unmasked Israeli intentions of imposing its vision of Jerusalem as a Jewish city, united Christian communities, fostered a Muslim–Christian coordinated response, and even elicited a response from the Vatican.

Anyone who was at least, say, age 9 or 10 when Israel occupied the West Bank will recall a time when “Qalandiya” referred to a local airport that flew passengers to Arab countries. Then people could travel as they did in other countries: by getting on a plane flying from a local airport, without at first going through the unpleasant experience of crossing a bridge and international border with several “security” and passport checks separating the passenger from the airport. The author of chapter 16 searches for former airport employees and even people who lived in the airport neighborhood who can recollect the functioning airport.

Since seizing control of Jerusalem, Israel has been relentlessly establishing Israeli settlements in and around it, as part of its strategy to redefine the city as Jewish. chapter 17 addresses the social and political implications of that strategy, as well as its evolution. It reviews the impact of internal political and ideological differences and a determination to create facts on the ground that can predetermine the outcome of negotiations on the city’s future. Comparing the vibrancy of civil society described in part I with Israeli proposals for Jerusalem that have been advanced since the Camp David talks in the late 1970s—all of which deform the city by enforcing a Jewish demographic majority—gives one pause. How can such a gem of a city have fallen to such unimaginative and uncaring hands? It is small consolation that despite Israel’s best efforts, Israelis “sense that the Judaization process has failed.”1

Having presented a view of Jerusalem civil society before the city was violently cleaved in 1948 and described the results of imposing a foreign identity upon it, the volume ends appropriately with a chapter that imagines a reality for Jerusalem that the majority of its residents can view as just. The author states that his purpose is to sketch “a rights schema, or structure of principles, that can help support an open, peaceful, postcolonial Jerusalem in the future.”2

“Rights Talk” lays out the right to the city, the right to the appropriation of space, and the right to participate. Such a view transcends the current dead end by promoting a vision for the city that is inclusive and affirms nonethnic citizenship. When one considers the unnatural state of Jerusalem today—a long-time regional hub severed from not only the Arab world of which it is an organic part but also the indigenous population mere miles away, its demography and access points controlled and engineered to support a shabby vision of a Jerusalem that never was—any vision that steers away from the present trajectory and is guided by the city’s history of openness prior to 1948 is one that deserves attention.

Jerusalem International Airport, once a gateway for an open region to the world, offers a study in sharp contrasts to the area’s present closure regime.

Ida Audeh is an editor who lives in Virginia. Her review of Anan Ameri’s The Wandering Palestinian: A Memoir was published in Journal of Palestine Studies 50, no. 3 (2021).