Salah Hammouri, a Palestinian Jerusalemite who is a human rights lawyer, was released from an Israeli prison in 2011. Ever since, Israel has been challenging his right to be in Jerusalem and to live with his family in Jerusalem. In October 2021, the state officially revoked his residency rights, citing the 2018 amendment to an existing law that allows the minister of interior to deport people for “Breach of Loyalty.” Salah is appealing this decision.

This is his story. 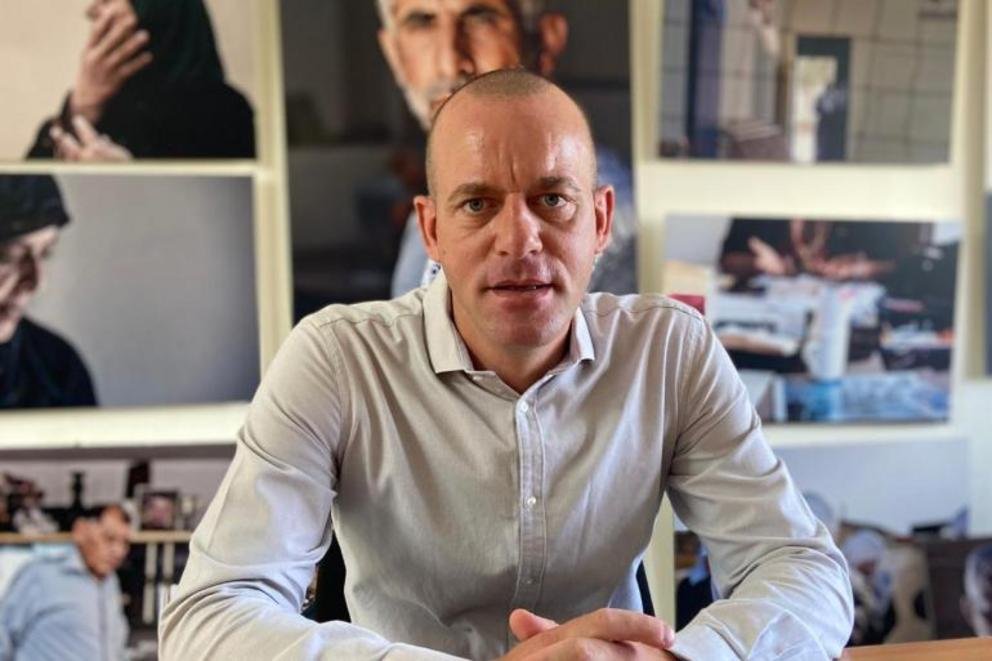 Salah Hammouri, 36, is a Palestinian French human rights lawyer and researcher with Addameer Prisoner Support and Human Rights Association in Ramallah.1 He was born in Jerusalem to a Palestinian Jerusalemite father and a French mother and has lived there all his life. At the time of his birth, his mother, a French citizen, also held Israeli permanent-resident status, which was extended to her by her husband through the family unification process. Hammouri, like his mother, held both an Israeli permanent-resident ID and a French passport.

Salah was initially notified that his residency was revoked by order of the Israeli Ministry of Interior on September 3, 2020. On October 18, 2021, he was officially notified that a final decision had been taken to revoke his Israeli permanent-resident status and deport him from Jerusalem to France. The decision was based on the “breach of loyalty” law, also referred to as “breach of allegiance to the State of Israel” law (see Precarious Status, Not Permanent: The Status Held by Palestinian Jerusalemites, Part 1, and Deported for Not “Showing Loyalty”: The Case of Four Jerusalem Officials Whose Residency Was Revoked after a 12-Year Legal Battle).

The decision, which was based on secret information and referenced broad, unsubstantiated accusations, such as conducting “terrorist activities” and affiliation with “terrorist entities,” became finalized once approved by Israeli attorney general Avichai Mandelblit and Minister of Justice Gideon Sa’ar as well as Shaked.

Ominously, the ministry asserted that the decision was necessary “to deter others from breaching allegiance to the State of Israel,”2 suggesting that Hammouri’s case is meant as a wider message.

The ministry asserted that the decision was necessary “to deter others from breaching allegiance to the State of Israel.”

In December 2021, Hammouri appealed the punitive residency revocation. According to Israeli law, the ministry is obligated to accept appeals on all orders within 30 days of notification. Hammouri’s first appeal was rejected.

Salah and his legal team, HaMoked—Center for the Defence of the Individual and Advocate Lea Tsemel, are working on another appeal. Meanwhile, he remains in Jerusalem.

A Teenager in Israel’s Crosshairs

The state had long targeted Hammouri. In 2001, during the Second Intifada, Hammouri was 16 years old. Israeli soldiers shot him in the leg, and then arrested and detained him administratively for five months for distributing “anti-Israeli propaganda” (he was spray-painting on walls). He later observed, “From that moment on, by the simple fact of having been arrested and of expressing myself for our rights, I was deemed suspect, without ever being able to prove my innocence.”3

After his release, Hammouri continued high school, graduating in 2003.

“I was deemed suspect, without ever being able to prove my innocence.”

In 2004, during Hammouri’s second year at Bethlehem University, he was arrested again. The Ministry of Defense accused him of affiliation with the Popular Front for the Liberation of Palestine (PFLP). He was detained administratively for five months—once again, without formal charge or trial. He was the youngest administrative detainee from Jerusalem at the time.

In March 2005, Hammouri was arrested at the Qalandiya checkpoint and accused of plotting to assassinate Iraqi-born Rabbi Ovadia Yosef.4 The police raided his family home, searched every inch of it, and confiscated his computer. The only evidence the prosecution had was “that he was seen by an informer near the house” of the rabbi; he was also accused of purchasing arms. No weapons were ever found, however, and the indictment evidence was flimsy. He denied the accusations. He was placed under administrative detention yet again.

After three years of administrative detention—renewed every six months without charge or trial—under pressure from those close to him and despite maintaining his innocence, Hammouri entered into a plea-bargain agreement; he admitted that he was a member of a PFLP youth cell and that he had intended to participate in a plot against Ovadia Yosef. Although he still denied the accusations, his family believed this would shorten his prison term.

Instead, the prosecution gave him a choice: immediate release with deportation to France for a period of 10 years, with the option of returning to Jerusalem after the period is over, or 10 years in prison. Hammouri’s lawyer tried to convince him to accept temporary deportation, because she was hopeful that she could reduce the expulsion order to five years.

Hammouri rejected the offer and was subsequently sentenced to seven years.

When Hammouri was later asked why he rejected the option of living in Paris in 2008, he said, “We [Palestinians] do not compromise our freedom, even if we pay a heavy price sometimes, and it is not a matter of stubbornness as much as it is a matter of dignity and freedom. I won’t use the privilege of having a dual citizenship to leave and leave my people behind.”

His principled stand was publicized locally, and Palestinians admired his refusal to confess to an alleged act he did not commit, especially when the alternative—the opportunity to live in Paris—was so tempting.

“We [Palestinians] do not compromise our freedom, even if we pay a heavy price.”

In December 2011, three months before he completed his sentence, Hammouri was freed as part of a prisoner exchange deal with Hamas, wherein 1,000 Palestinian prisoners were released in return for the release of captured Israeli soldier Gilad Shalit. As a condition of his early release, Hammouri was banned from entering the occupied West Bank until the remainder of his sentence was completed.

After his release, Hammouri reenrolled in university and obtained his bachelor’s degree in law in 2015.

In 2014, Hammouri married Elsa Lefort, a French citizen who had a six-month visitor’s visa. He applied for family unification on behalf of his wife several times. However, this application was delayed, and he faced more obstacles than Palestinian Jerusalemites typically face when applying for spouses. The Israeli Ministry of Interior refused to renew Elsa’s visitor’s visa several times, because Hammouri was blacklisted as a result of being imprisoned and had been released in a prisoner exchange deal. The couple tried renewing Elsa’s visa in a variety of ways, all of which were unsuccessful. 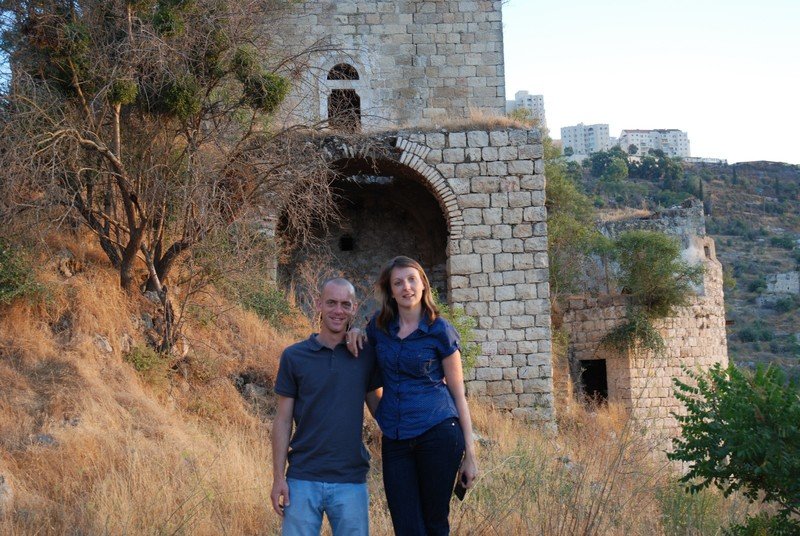 From March to September 2015, Hammouri was banned again from entering the occupied West Bank for a six-month period. This ban was renewed twice. (These orders are issued under “emergency measures” and are typically based on vague, unsubstantiated claims that an individual poses a “security threat.”) This meant he could not continue his graduate studies in law at al-Quds University, complete his training to become a lawyer, or visit his family in al-Ram or his workplace in Ramallah for a year and a half.5

Elsa remained in Jerusalem even after her visa lapsed; this made her residence illegal, and she couldn’t move freely, because her status would become obvious at a checkpoint. Leaving the country to visit her family in France would be risky, because she could be deported for violating the terms of her visa and not allowed to return.

In June 2015, Elsa got a job at the French consulate in Jerusalem and from it, she received a one-year work visa. With this newfound sense of security, the couple decided to travel to France to visit her family for Christmas. Elsa was seven months pregnant at the time. 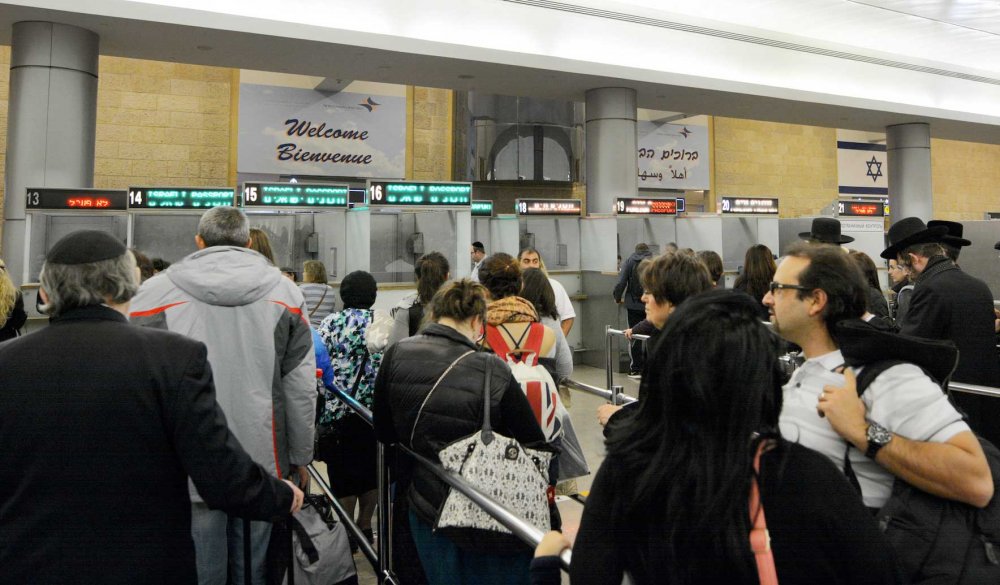 In January 2016, on their way back to Jerusalem after the trip, Elsa was detained at Ben Gurion Airport. Even though she had a valid work visa; she was denied entry to Israel, held in isolation for two nights and two days without any medical attention (although she was pregnant), and promptly deported back to France. She was banned from entering Israel for 10 years.6

[Elsa] was banned from entering Israel for 10 years.

Hammouri appealed Elsa’s entry denial; the judge rejected the appeal. During the appeal process, Hammouri learned that the Ministry of the Interior had rejected their family unification application two days after they left Jerusalem. (The minister of interior at the time was Aryeh Deri, also a founder of the Shas Party.)

Elsa gave birth to their first child, a boy, in France, without her husband by her side.

A Family on Two Continents

Hammouri planned to travel to France on August 30, 2017, to visit his family. However, he was arrested on August 23. He had a hearing five days later, during which the prosecution failed to present charges. The judge placed several conditions for his release, including setting bail at NIS 10,000 (around $3,000).

In early 2019, Hammouri returned from a visit to France. While he was still in Ben Gurion Airport, he received a text message from an Israel Security Agency (Shabak) interrogator welcoming him back and congratulating him on his new baby girl.

In June 2020, Hammouri planned to visit his family in France. On June 30, he went to a medical center in Sheikh Jarrah to be tested for coronavirus as required for international travel. While leaving the center, he was arrested by a dozen Israeli soldiers and detained. Salah was interrogated at al-Moskobiyya interrogation center in Jerusalem for nine days. His bail was set at NIS 2,000, with an NIS 1,000 guarantee, and he was given a 90-day communication restriction order, preventing him from communicating with a list of Palestinians who are classified as “security threats.”7

Hammouri was also banned for six months from entering the Military Court in Ofer, ostensibly also for “security reasons.” The order made it impossible for him to defend his clients, all of whose cases were heard before that court.

Then, on September 2, 2020, he received a call from the police, summoning him to al-Moskobiyya interrogation center the next day. There, an order was read aloud to him, signed by interior minister Aryeh Deri, of the intention to deport him.8 This set off the series of events that led to the recent final decision to deport him.

Hammouri has endured arbitrary arrests and detentions, travel bans, and punitive residency revocation. Most important, he has been separated from his family, his wife and two children (Hassan, six, and Yaffa, four), who have lived in France since January 2016; these days, he is relegated to parenting via Zoom and WhatsApp. Hammouri had planned to visit his family every three months, but he has not left the country since December 2020, because he knows that if he does, he will not be allowed to return.

The facts of this case are current to the time of publication. However, this is a developing story and will be updated.

Research for this story was conducted in October 2021.

Ovadia Yosef (1920–2013) was an Iraqi-born Talmudic scholar, the Sephardi Chief Rabbi of Israel from 1973 to 1983, and a founder and long-time spiritual leader of Israel’s ultra-Orthodox Shas Party.

Budour Hassan, legal expert on Jerusalem, is angered by conditions in her city.

A feminist activist and leader who worked to protect and promote the legal, social, and political rights of women locally and worldwide